Empire – that is the name given by art historians to an epoch in which the work of artists and craftsmen was inspired by ancient models. It coincides with the time of Napoleon’s rule and is considered to have been between 1799 and 1815. This epoch should not be confused with Neoclassicism. While Neoclassicism was a Europe-wide phenomenon that draw inspiration mainly from the art and culture of ancient Greece, the Empire style is linked to the expansion of France. The Empire style therefore imitates Egyptian art just as much as Roman art. The most important thing to remember here is that the Empire style was used systematically to impress others. It was intended to signal to observers that Napoleon, his family, and his representatives were following in the footsteps of powerful ancient rulers, and could even exceed them in terms of the influence they wielded. 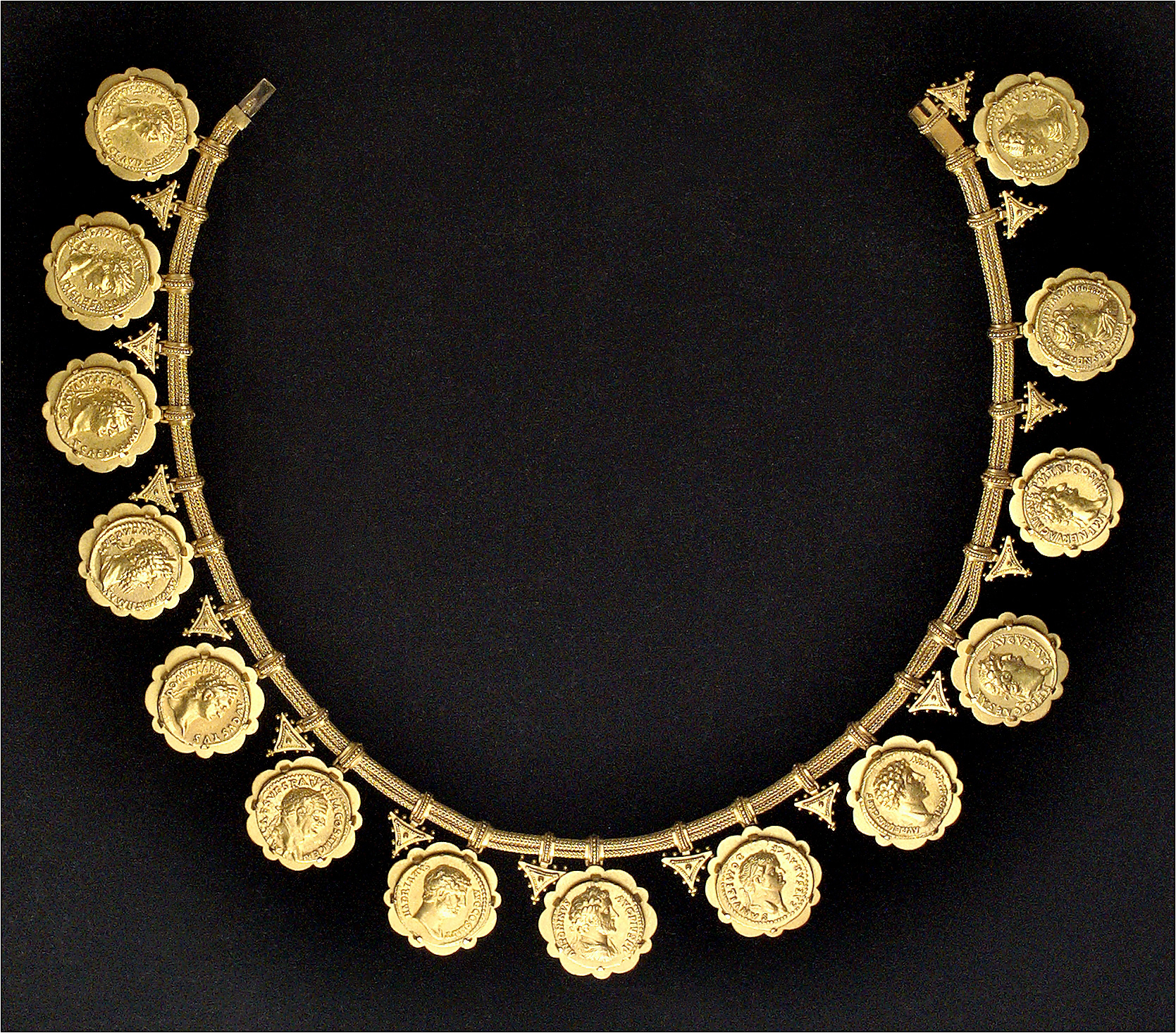 Great Napoleon’s little sister
The Duchess of Guastalla, Paoletta Bonaparte, was born in Corsica in 1780, and knew very well how to impress people with her beauty. To this day, anybody visiting Villa Borghese can get an idea of how beautiful she was: The sculptor Antonio Canova immortalized her, nude, as “Venus Victrix”.
Napoleon Bonaparte used his younger sister Pauline for his own ends. In 1797, when she had just turned 17, he married her to a friend of his, a General whom, four years later, he sent to Saint-Domingue to quell the slave uprising. Pauline accompanied her husband and returned with his dead body – like more than 25,000 of his men, Leclerc had fallen victim to yellow fever. Before the end of his sister’s year of mourning, which was customary at the time, Napoleon married her to Camillo Borghese, a member of high Roman nobility.
Was it for one of these weddings that Napoleon ordered a very special piece of jewellery made for Pauline? We do not know that, just like we still do not have the last piece of evidence to prove that the gold necklace and bracelet were actually made for Pauline.

Pauline’s love for antiquity
Pauline would have definitely been very happy to receive this gift. She loved to dress “à la grecque”, as was fashionable in Paris at the time. This included shirt dresses made from almost see-through muslin, with a high waist and a generous cleavage. These clothes revealed more than they hid, so the more modest women would wear flesh-colored shirts underneath. Not Pauline. She didn’t need anything like that. Like other fashion-conscious women, she combined these clothes with antique jewellery, or jewellery made to imitate the antique style.
We know that Pauline’s collection included a diamond necklace with inset gems depicting the portraits of Roman Emperors, as well as a belt made up of meanders with a gem for a buckle, and a comb studded with seven antique-style gems. The gold necklace and matching bracelet on offer at the Künker auction would have been perfect additions to her jewellery box. 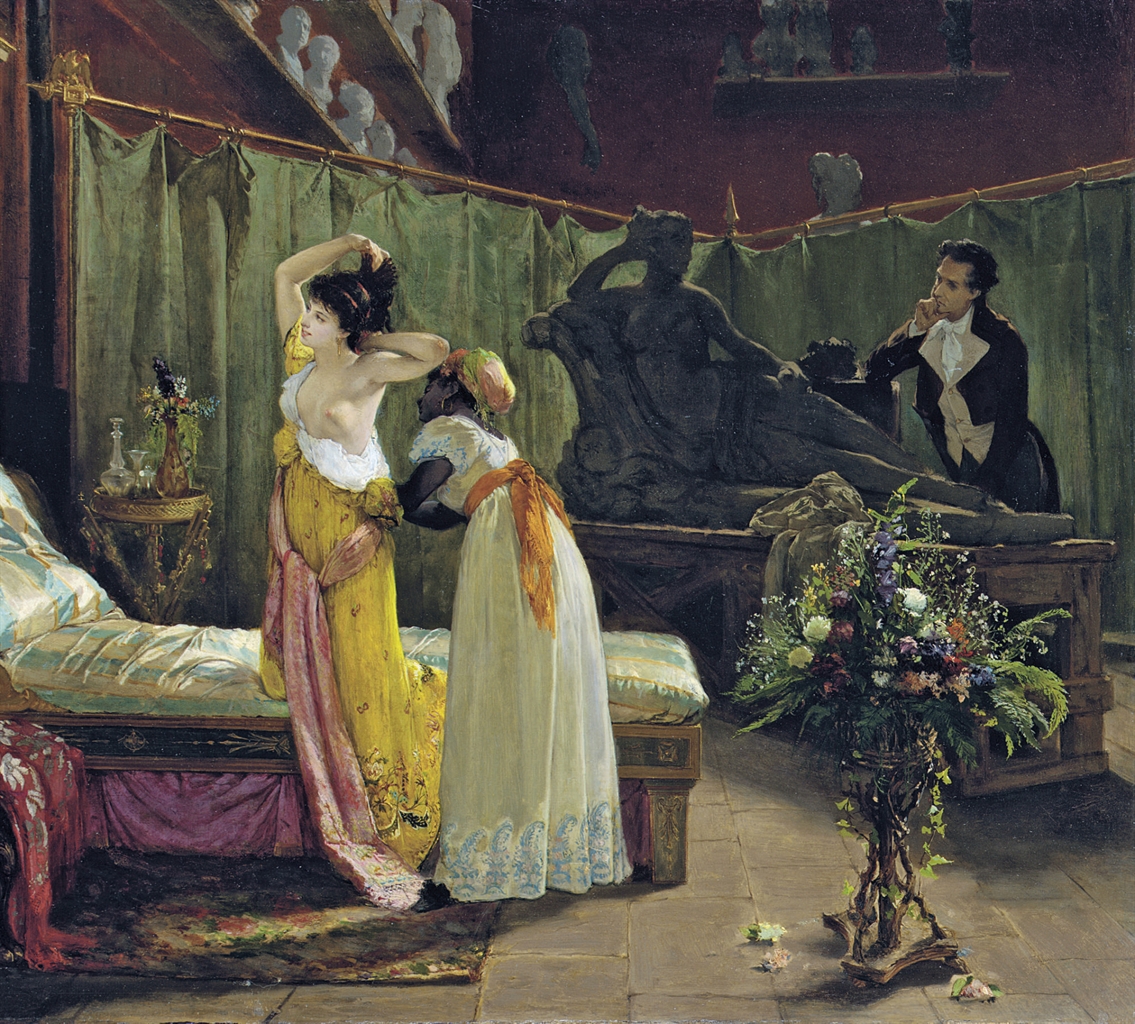 Pauline Borghese gets ready to pose for Antonio Canova. Painting by Lorenzo Vallés (1831-1910). - We are unable to include an image of the statue itself due to the Italian state’s rigid copyright regulations.

A femme fatale?
Pauline – affectionately called Paulette by her relatives – must have been a very independent woman. Although she obediently married the men her brother lined up for her, she is not said to have remained faithful to them – although it is very unlikely that all of the stories circulating about her are true.
So let’s stick to the facts we can definitely prove. Pauline was strikingly beautiful, that much is clear from all of her paintings. And she was proud of her body. How else would she have come up with the idea of posing naked for Antonio Canova? He was considered “the” sculptor of the time. He was said not only to match the great artists of antiquity, but to exceed them. His Venus Victrix caused a scandal. An upstanding lady of society had posed naked for a piece of art! Shocking! It is said that Canova had initially wanted to depict Pauline, fully clothed, as the virginal Diana, and that it was actually Pauline herself who insisted on her being represented as Venus!
In the midst of this scandal, we should not forget that her big brother Napoleon had also posed naked for Canova shortly beforehand as Mars the bringer of peace, who, in Roman mythology, is closely connected to the triumphant Venus...

Or a loyal sister?
Pauline shared her knowledge of and love for antiquity with her brother. The siblings were also connected by the deep affection they had for each other. When Napoleon was exiled to Elba, his sister sold her possessions, including all of her expensive jewellery, and took the money to her bother. She was the only member of the Bonaparte family to visit Napoleon in exile!
After the Battle of Waterloo, when all hope for France’s status as a major power had been dashed, Pauline moved back to Rome, where the Pope offered some members of the Bonaparte family exile and protection.
But she could no longer make it to St. Helena. Pauline suffered from cancer and died in 1825, without getting the chance to see her brother one last time.

The jewellery on offer in the Künker auction, which may well serve as evidence of the sibling love between Napoleon and Pauline, was first presented to the art world in 1966 at the Delft Antiques Fair, which was, at that time, one of the most important trade fairs for art and antiques. Jacques Schulman’s daughter enchanted journalists with her youthful charm as she wore the valuable necklace and told its story.

This jewellery auctioned by Künker certainly wasn’t made to be shut away in a safe as an investment, but to be worn by a confident, assertive woman.