How Do We Even Know When The Battle at Marathon Took Place?

Imagine there were no clocks and no calendar: how would we measure time? Basically, our ancestors developed two methods for this: some observed the sun, others the moon. Most people chose to go with one of these two options. Egyptians did not. They used both at the same time and created a civil and a religious calendar.

The basis of their civil calendar wasn’t the sun itself, but Sirius, who moves parallel to the sun and is called Sothis in Egypt. The rising of Sirius at the time of daybreak took place in Memphis – according to our calendar – on 19 July and signalled the beginning of annual flooding of the Nile river. The country owed its wealth to the Nile. That’s why the entire civil year revolved around the Nile river and the fertility associated with it. Egyptian farmers divided the year into three seasons: flooding from the beginning of the year on July 19 to November; sowing / springing / growing from November to March; heat / harvest until July. The religious year, on the other hand, was based on a lunar calendar: every month was dedicated to a deity under whose protection the month stood and whose main festival was celebrated in that very month. There was a little flaw to the system: the Sothic and lunar calendars were of different lengths and, therefore, differed a little more every year resulting in a growing misalignment of both systems.

When the beginning of the Sothic and the lunar cycle coincided again after 1,460 years, one Sothic period ended. And this event occurred – as the Roman astronomer Censorinus tells us and as modern astronomers calculated – on 19 July 139 of our calendar. 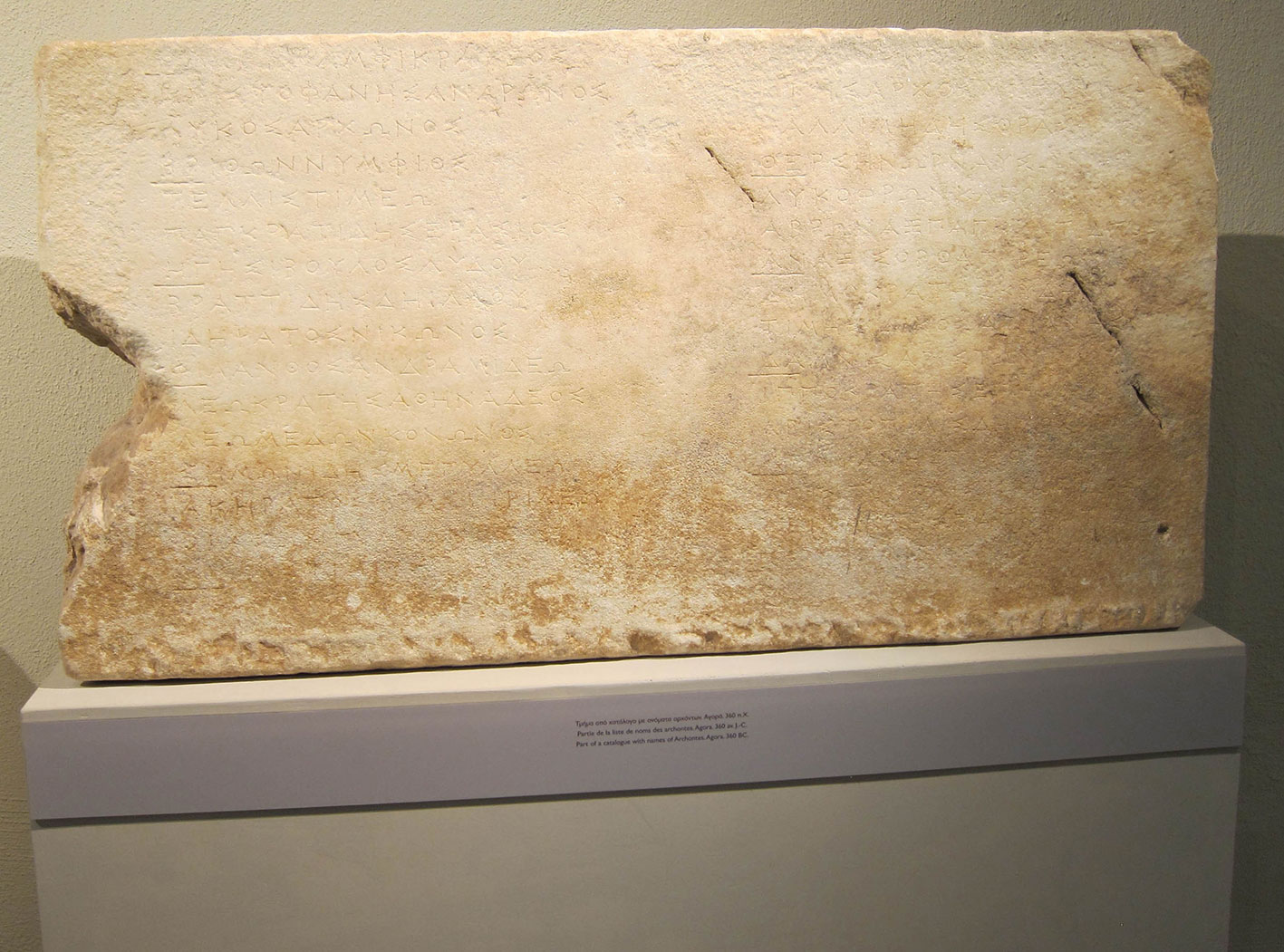 List of archons who represented the citizens of Thasos. Photo: UK.

How Important a Single Date Can Be!

The Egyptian Sothic cycle is of utmost importance for modern historical research. For historians, only dates that can be linked to the modern calendar are part of the “absolute” chronology. If we only know the order in which certain events occurred, we are talking about “relative” chronology. If you delve into the original works of Thucydides, you will quickly notice that he gives an exact account of the events of the Peloponnesian War year by year, but the dates he mentions don’t tell you anything at all. This is because Thucydides dates the events by associating them with the officials of various Greek cities. That worked excellent back then because everyone knew who had been an official at what time and, if you forgot about one of them, you could consult the publicly posted lists of officials. But we wouldn’t be able to use these dates if Alexander of Macedonia hadn’t conquered Egypt. This made him a pharaoh, and therefore all Egyptian lists of kings mention him as well as the years of his reign. And thanks to the absolute chronology provided by the Sothic cycle, we can calculate what dates of our calendar the dates on these lists of kings correspond to. And that, in turn, means that all events of ancient history can ultimately be dated thanks to Egyptian chronology. The reason for this is that another scholar of Alexandria, Eratosthenes of Cyrene, has left us a relative chronology of Greek history:

Thanks to the combination of Egyptian lists of kings and the Sothic cycle, we can calculate that Alexander died in 324/3 BC. By means of this single absolute date, we can calculate all other dates backwards, although we will ignore the dates that are almost mythical for setting up this table.

This means that our entire Greek chronology would hang by a thread if there wasn’t one source confirming it: Thucydides I, 28 mentions a solar eclipse in his Peloponnesian War, which today’s astronomers date to 3 August 431, making it likely that Eratosthenes of Cyrene was right at least until the beginning of the Peloponnesian War.

But let’s go back to Antoninus Pius and his zodiac series. Like all Romans, he was familiar with the idea that time moves in a kind of circle. Romans knew the ‘saeculum’, a cycle that began anew once all people who had witnessed its beginning were no longer among the living. Augustus had used this idea to stage the dawn of a new golden age after the civil war. His successors were to imitate this again and again – although they didn’t have as much success with it. Historians didn’t agree on when a saeculum began, which gave some leeway to every emperor, and Antoninus Pius made use of it in Egypt.

Antoninus Pius and His Astrological Series

In the 8th year of his reign, he minted a series that picked up the motif of the Sothic year with sun and moon and depicted various zodiac signs and houses. And by doing so, the emperor was at the cutting edge of science. The astronomer Claudius Ptolemy, who is the originator of the “Ptolemaic worldview”, lived and worked in Alexandria. He systemized the movements of the planets by having them – according to his vision – describe a perfectly circular path on crystalline spheres. This made them go through the 12 zodiac signs enabling scholars to create more accurate horoscopes, as Ptolemy stated in his Tetrabiblos. Unfortunately, we do not know the exact occasion for which this wonderful series was minted. We should keep in mind that the human factor might have also played a role in ancient times. Perhaps it was the emperor himself, or his representative in Alexandria, who decided after a discussion with Claudius Ptolemy or after reading his work that his astrological findings were perfect material for a coin series. The last collector who was able to gather the zodiac sign series with this level of completeness and quality was probably Giovanni Dattari, the Italian coin and antiques dealer who died on 18 February 1923 in Cairo. Thus, thanks to a wealth of material. Künker’s auction 347 provides every collector of Alexandrian coins with a once-in-a-collector’s-lifetime opportunity.