our eLive Auction 65 is online. From now on you can study all pieces of the upcoming auction.

The offer ranges from ancient to modern times. A large part of the coins from the ancient part come from the collection of a Hanseatic Roman friend and a Lower Rhine private collection and belong to the Roman Imperial period. Among the Greek coins, the focus is on the regions of Thrace and Macedonia.

From the field of Greek coins stands out a rare hemidrachm from Messene, formerly part of the BCD collection. At the beginning of the Roman Imperial period, a small series of aurei of the emperors Augustus and Tiberius is particularly noteworthy. Further highlights of the imperial period are among others an extraordinary nice denarius of Traianus.

The overview of modern coinage of European objects ranges from A for Albania to T for Turkey, with a focus on France and Russia. In addition to a smaller offering from Overseas and Habsburg, we would like to draw your interest to Germany, which represents nearly half of eLive Auction 65 with over 650 lots. In particular, we would like to recommend a collection of Northern German coins.

We hope you enjoy studying the eLive Auction 65.

Many regards from Osnabrück,
Your Künker Team 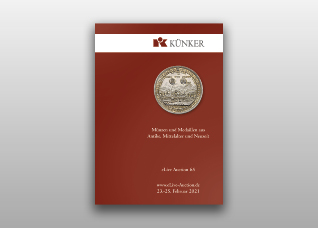 All lots can be viewed at our offices only by prior appointment until February 25th, 2021 in compliance with current Corona regulations. Our customer service will happily register your appointment by phone at +49 541 96202 0.