You are here: Information History

Serving the Collector for More Than 40 years 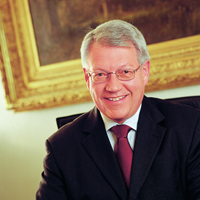 Those who understand, and have a feel for, the fascination which emanates from embossed gold and silver know: one can only be successful in the coin business when he or she is in it with heart and soul.

The beginning of Fritz Rudolf Künker’s passion came with a present from his grandfather, who in the mid-1950s left his six-year-old grandson a five-mark piece minted in 1903 in the (at that time) Kingdom of Saxony. From that moment the fascination with embossed metal never loosened its hold on Fritz Rudolf Künker. The collection of imperial coins which he assembled as a schoolboy and student of history became, in 1971, the cornerstone and foundation of his company. Initially a “one-man operation" in his native Schapdetten near Münster, the company grew quickly. It found a new base of operations in the historic old city center (“Altstadt”) of Osnabrück, before moving to a villa built in Germany’s industrial age (“Gründerzeit”) in Osnabrück’s Westerberg neighborhood.

In 1972 the owner’s brother was hired as the first employee. Horst-Rüdiger Künker, as authorized officer, directs the gold merchandising division which, along with the coin business, represents the company’s second important activity.

The business of merchandising and shipping coins and medals was expanded more than 20 years ago to include the auction business, which has since become associated worldwide with the name Künker.

Today, after four decades of coin and gold merchandising and some 300 successful auctions, more than 50 employees work in Osnabrück, Munich, Berlin, Hamburg, Znojmo and Zurich for the firm, which since 2008 has been administered as the limited commercial partnership “Fritz Rudolf Künker GmbH & Co. KG”.

And the fascination with embossed metal is still every bit as strong in the Künker family as in the grandfather’s time: since 2009 Ulrich Künker, the son of Fritz Rudolf Künker, has been a partner and, as general manager, committed to the company’s traditions.