You are here: Information Coin Knowledge Preservation and Condition of Coins 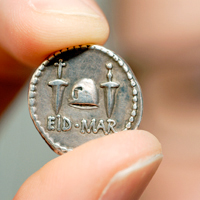 In the quality assessment of any coin, both the rarity and the degree of preservation play important roles. These two factors lead to the determination of the coin’s value.

The coin’s degree of preservation depends on the extent to which the field and the relief of the coin have been worn away through general circulation. In some cases certain types of damage are typical of a particular manufacture process, and should accordingly be declared as such (common minting weakness or minting-related nicks). Special restoration or cleaning measures such as the filling of a hole, removal of a “carrying eye”, or unprofessional polishing of a coin must be individually indicated.

The following degrees of preservation are in standard use in the international coin trade:

Proof (German: “Polierte Platte”, pp):
Strictly speaking, the “proof” preservation designation involves a special mechanical manufacturing process for coins. A polished stamp is used to emboss the blank several times, which is also polished, after which it is finally individually packaged. No damage of any kind, and not even the slightest trace of circulation may be present. “Proofs” feature a very shiny and strongly reflective field and a non-glossy relief, which stands out well from the field. This is typical of pieces produced especially for collecting purposes by the respective mints.

Mint Luster or FDC (German: “Stempelglanz”, stgl.):
A minting with the preservation designation “mint luster” should have no visible flaws recognizable with the naked eye. No signs of circulation or damage (scratches, nicks, etc.) should be noticeable on the coin. The field and relief of the coin should have the same metallic brilliance and the same shade.

Extremely Fine (German: “Vorzüglich”, vz):
with a coin or medallion bearing the preservation designation “extremely fine”, all minting details should still be clearly visible. Minor scratches in the field can be tolerated, but they should be to the greatest possible extent a result of the manufacture process of the coin and should not represent signs of wear. The relief of an “extremely fine” coin must be free of defects. The brilliance may have disappeared due to a brief period of circulation, or may still be present only in the deeper points of the relief.

“Very Fine” (German: “Sehr Schön”, ss):
the relief of a minting in “very fine” condition may show minor damage (small scratches and nicks) and somewhat worn-down details, but the coin image should still be clearly recognizable in its contours. In coins of the 19th / 20th Centuries this is the lowest degree of preservation still considered collectable.

“Fine” (German: “Schön”, s):
mintings with the preservation designation “fine” show substantial circulation-related signs of use and wear or major nicks on the coin. The coin image should, however, still be clearly recognizable in its outline. Only very rare coins are still considered collectable in this degree of preservation.

“Fair” (German: “Gering Erhalten”, ge):
This preservation degree designation describes coins which have lost practically their entire coin image through wear. Coins with this preservation designation are basically considered not collectable, since even the correct identification of the proper type is often impossible.

In addition, one may still find in the coin trade at times the German preservation indications “Spiegelglanz” ( intern.: “Proof-like”), “Unzirkuliert” ( intern.:“Uncirculated”) and “Prägefrisch” ( intern.: “Mint State”), which however, as a rule, have to do with special manufacturing procedures involving fully automated coin production, and are not typically found among the classical terminology of preservation degrees.