Preview: More than 6,000 lots with an estimate of 7.1 million euros in Künker’s Spring Auctions

Five auctions within five days, comprising noteworthy specialized collections, will be conducted by the auction house Künker at the Steigenberger Hotel Remarque on March 13-17, 2017. Altogether, 6,378 lots with a total estimate of 7.1 million euros will be offered for sale. Auction 288 is devoted to coins from antiquity featuring among others the Dr. Rainer Pudill and Hannelore Scheiner collections. Auction 289 will be next, offering three specialized collections: 1.) Europe and the Ottoman Empire as Part 1 of the Ottoman Collection, and 2.) the Ottoman Collection Dr. Hans Wilski, and 3.) the Siegfried von Schuckmann Collection consisting of coins and medals focusing on the War of the Spanish Succession. The collector of Brunswick should make a note of March 15, for in Auction 290 a comprehensive collection of coins of the Dukes of Brunswick, with the branch lines, will be presented. Among others, the material includes the Harburg Collection of Rudolf Meier from Finkenwerder. Catalog 291 focuses on the third and the fourth part of the Ottar Ertzeid Collection, this time with coins from the Danish motherland and its other territories such as Schleswig-Holstein. Part 4 will be auctioned off as an eLive-Auction on the internet on March 21, 2017 starting at 6 p.m. In Auction 292, the general Künker catalog with world coins and medals from medieval to modern times in silver and gold, many superb single items can be found. Adding to this, the Hendrickx Collection with Russian coins will come under the hammer. 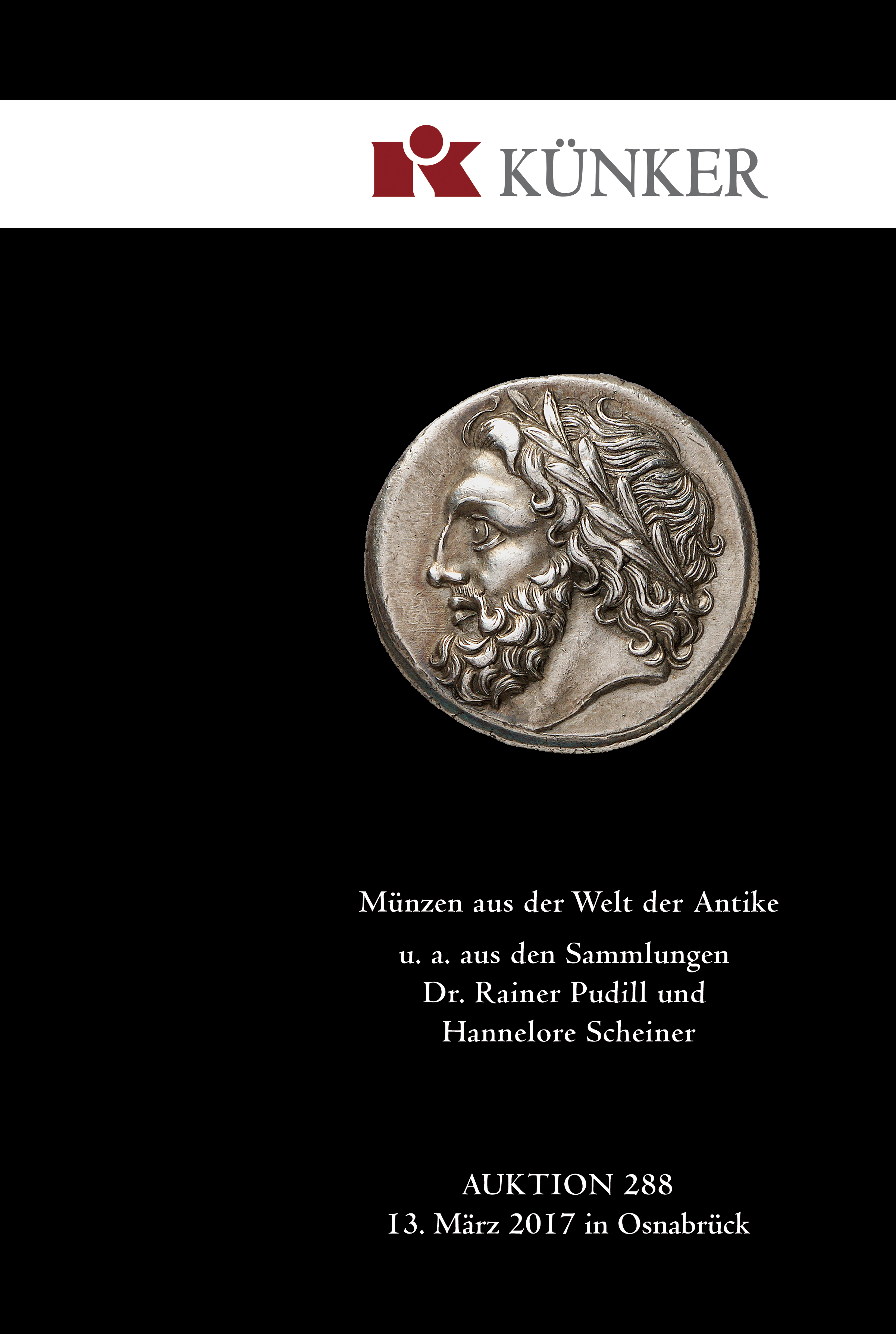 More than 1,000 lots comprising coins from antiquity will kick off the Osnabrück auction week. The material comes from the entire ancient world, offering Celtic, Greek, Roman, and Byzantine strikings, stemming from different collections, for example from the Dr. Rainer Pudill and the Hannelore Scheiner Collections.

Every one looking for high-quality Greek coins should browse the catalog carefully. He or she will discover interesting coins, ranging from the Syracusan decadrachm to the rare gold stater of Seleucus I, with some provenances that date back quite a long time. As a case in point we would only like to mention the stater from the city of Sikyon, estimated at only 1,500 euros. Graded very fine to extremely fine, this specimen was deemed so appealing by Samuel Pozzi (1846-1918) and Richard Cyril Lockett (1873-1950) that they acquired it for their own collections.

The emphasis of Auction 288 will be on Roman coins. More than 70 lots date from the time of the Roman Republic and the Imperators, including such great rarities as the aureus of Barbatius with the portraits of Marc Antony and Octavian. More than 600 lots date from Roman Imperial times. In this department, the connoisseur will find perfect aurei as well as a large number of attractive bronzes with historically highly interesting motifs. To single out only one example: The splendid sestertius of Caligula from the Vierordt Collection featuring a sacrifice in front of the Temple of Divus Augustus. This constitutes one of the most detailed depictions of a sacrifice ever to be found on ancient coins. A lavish medallion of Marcus Aurelius also deserves mentioning, dating from 163/4 and showing Salus feeding a snake on the reverse.

Let’s conclude the review of ancient coins with a particular intriguing pair: two aurei that feature Emperor Septimius Severus together with his entire family. The first aureus was struck in Rome in 201 whereas the second – modelled on it – is likely to have been made in India at a considerable later date. This ‘pair’ makes it perfectly clear how important the trade with Rome was for India and its monetary economy. 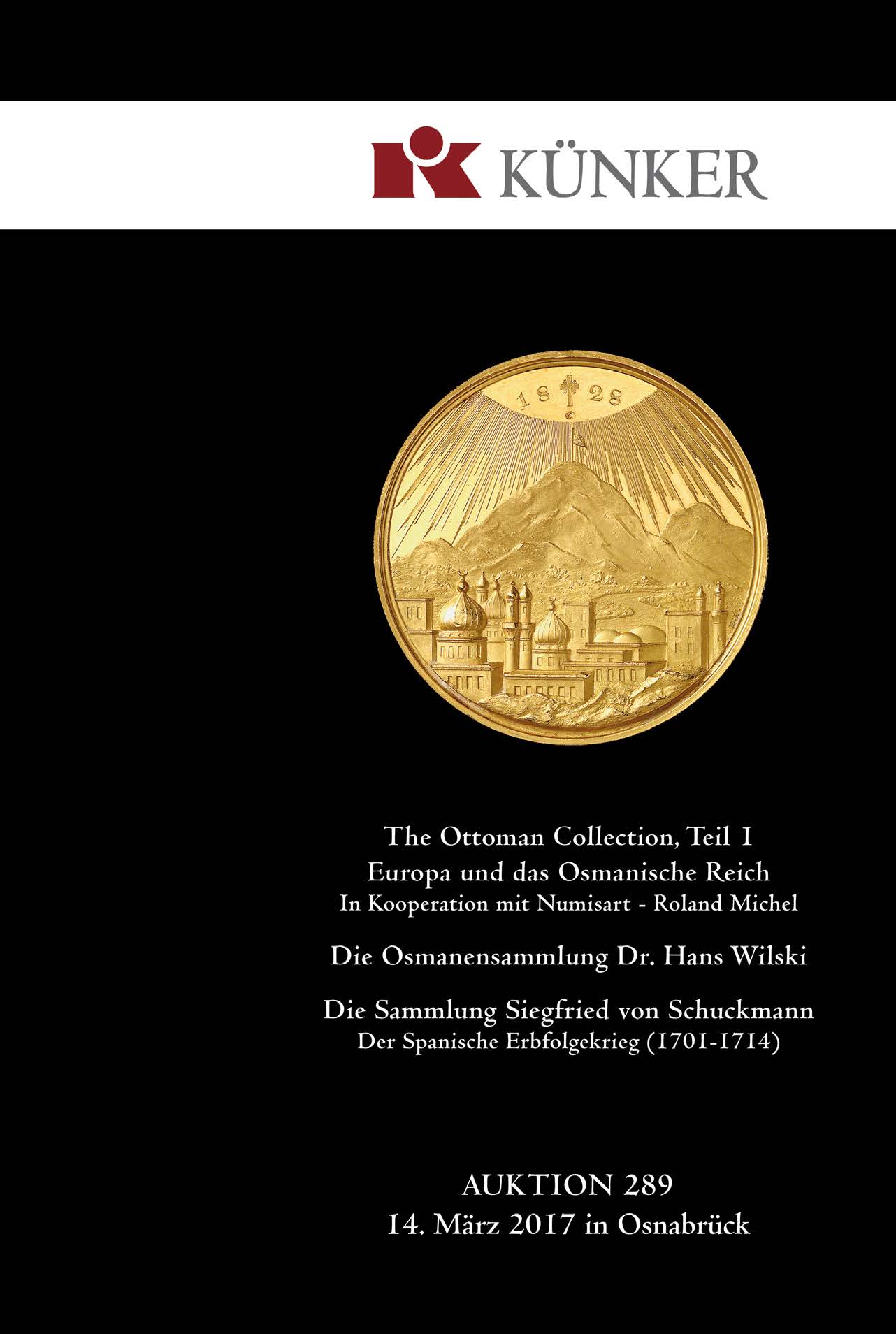 In collaboration with the Geneva-based numismatic dealership Numisart under Roland Michel, Künker has the privilege to offer the first part of the Ottoman Collection – Europe and the Ottoman Empire. This is a comprehensive documentation of the various (mostly hostile) contacts between European monarchies and the Ottoman Empire. Thematically speaking, the range covers the first siege of Constantinople by Igor of Kiev in 941 to the German medals on the Turkish Minister of War, Enver Pasha, who contracted the Ottoman-German Alliance in 1914. It only takes some flipping through this catalog’s pages to enhance the knowledge of the complicated relationship between East and West, a relationship that was never that easy but often mutually enriching.

The Dr. Hans Wilski Collection of Ottoman coins will also form part of this auction. His passion for the Islamic civilization grew when he, still a student of Chemistry, attended the events of the Quran translator Rudi Paret. In 1955, he travelled to the Orient for the first time, in a motorbike with sidecar. He was to make many more trips. In 1960, he began collecting Ottoman coins, with the foundation of it having been laid by his father who, in his capacity of land surveyor, had been involved in the construction of the Hejaz Railway. Wilski was especially interested in countermarks which constituted the subject-matter of his 1995 relevant standard book of reference. Listed as Lot 2129, his collection comprises several thousands of coins, among these numerous unique specimens and objects of high academic interest.

As if that weren’t enough specialized collections, the catalog will be concluded by the Siegfried von Schuckmann Collection featuring coins and medals from the times of the War of the Spanish Succession (1701-1714). Born in 1929, Siegfried von Schuckmann stems from an old German aristocratic family. After 1945, he migrated to South America where he established the company Industrial ESCO. Since 1977 he is collecting: coins first, followed up by medals. In 1999 his type collection of hemisphere talers was auctioned off. Now his second collection comes onto the market, consisting of coins that were minted during the time of the War of the Spanish Succession. This unjustly largely unknown war had a lasting effect on modern Europe. It not only resulted in a member of the French Bourbons on the Spanish throne but also in Great Britain becoming the world’s leading trade power. Also the House of Habsburg gained in territory significantly, at the price of becoming even more vulnerable to the national movements in the centuries to come. Nearly 180 medals and 100 coins are a testimony to the history of this European cabinet war.

Wednesday, March 15, 2017
Auction 290: Coins of the Dukes of Brunswick-Lüneburg, among others the Harburg Collection Rudolf Meier, Finkenwerder 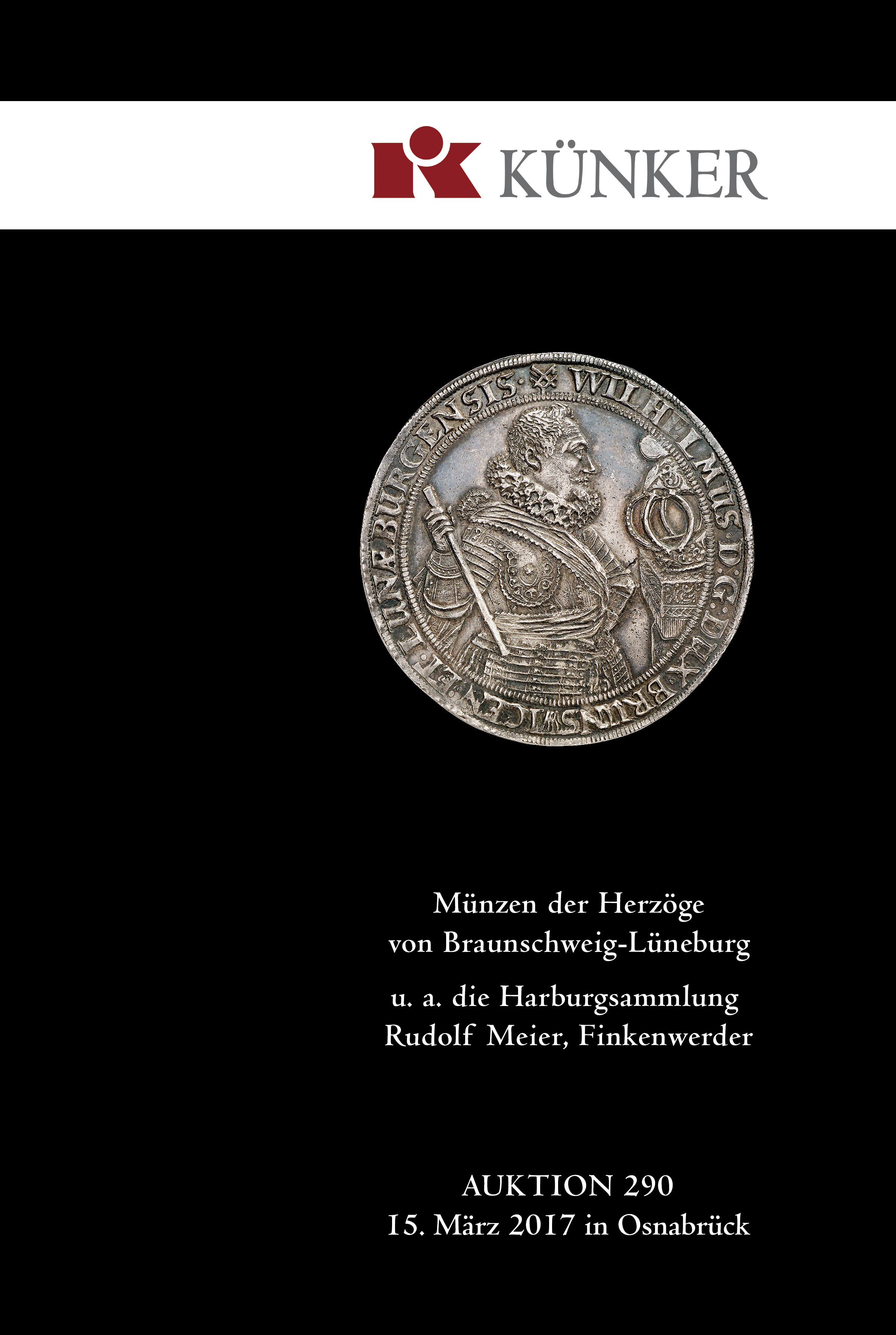 681 lots containing coins of the Duchy of Brunswick with the branch lines will go over the auction block in Auction 290. It will commence with the Rudolf Meier Collection, local historian and numismatist from Finkenwerder, offering coins from Brunswick-Harburg. This is the collection from which the cover piece stems from, an extremely rare löser of Wilhelm von Harburg, struck in Harburg in 1618/9, as well as a large number of other rarities such as a reichstaler on the death of Duchess Katharina Sophia, last descendant of the line of Harburg. 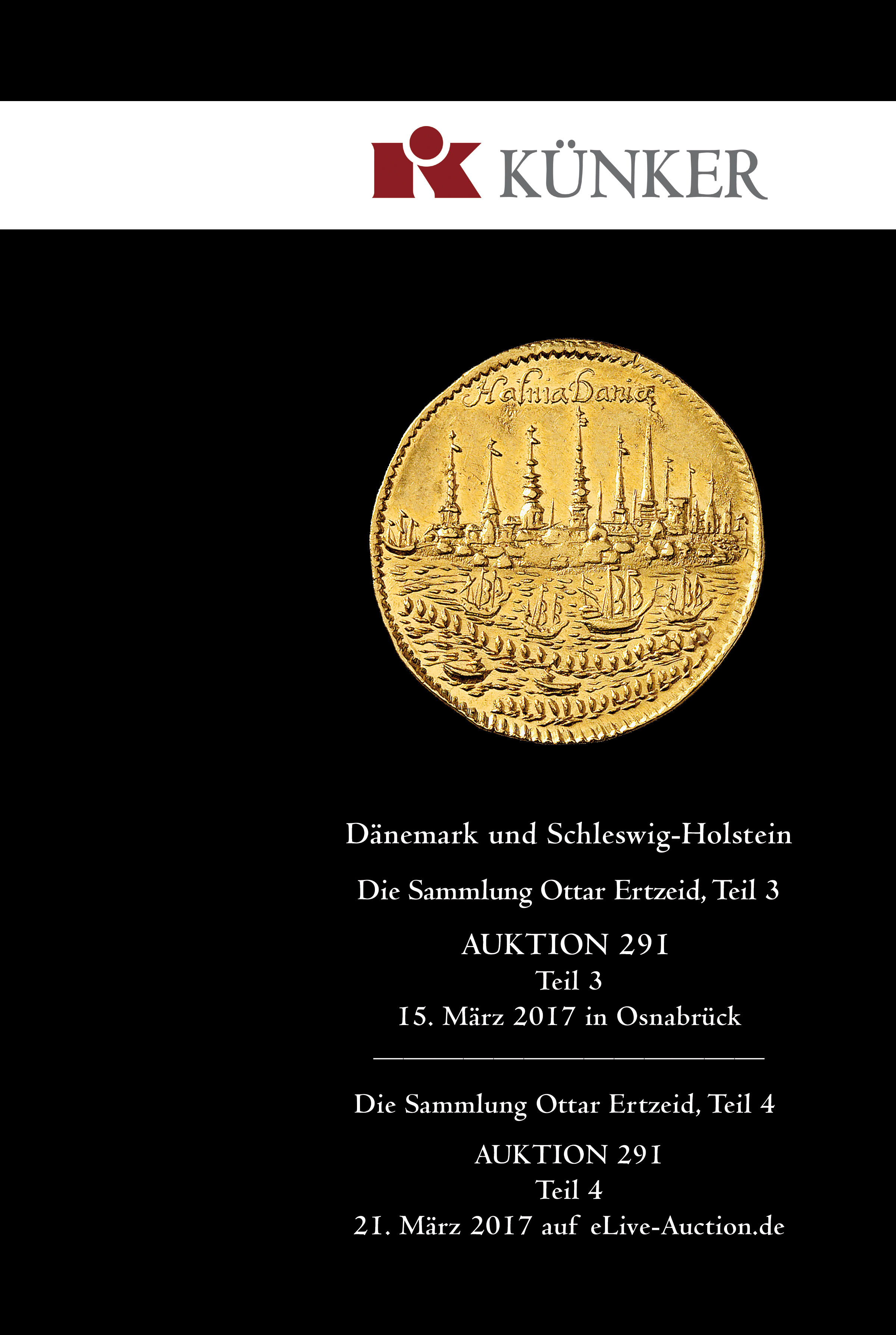 After  the coins from the Swedish Possessions from the Ottar Ertzeid Collection had been already auctioned off in the Berlin Auction, another part of this voluminous collection will follow, consisting of coins from the Kingdom of Denmark including the Danish strikings for Schleswig-Holstein and overseas. The auction will be conducted in two parts. While one part will be called out under the program of the Spring Auctions in the Steigenberger Hotel Remarque on March 15, 2017, another part will be offered for sale online, as an eLive-Auction on March 21, 2017.

The spectrum of this incredibly comprehensive collection ranges from Danish coins from medieval times – starting with Harald Bluetooth (936-987) – to the last Danish Queen Margarethe who has been ruling the country since 1972. It hardly needs mentioning that the connoisseur can find a number of rare specimens in this section of which we would like to highlight only two: a speciedaler 1597 of Christian IV and a 3 kronen piece 1726 of Frederik IV.

Strikings for the Danish motherland are flanked by large sections of privately issued coins and tokens for Greenland as well as coins for the Danish West Indies and Tranquebar.

The collectors of German coins will probably be interested in the Schleswig-Holstein department most of all. Numerous great rarities can be found there. The most spectacular specimen is a 1683 speciesdaler from Glückstadt, struck by Christian IV. It belongs to the Hielmstierne Collection (1714-1780) and is very likely to be one of four examples in private hands. 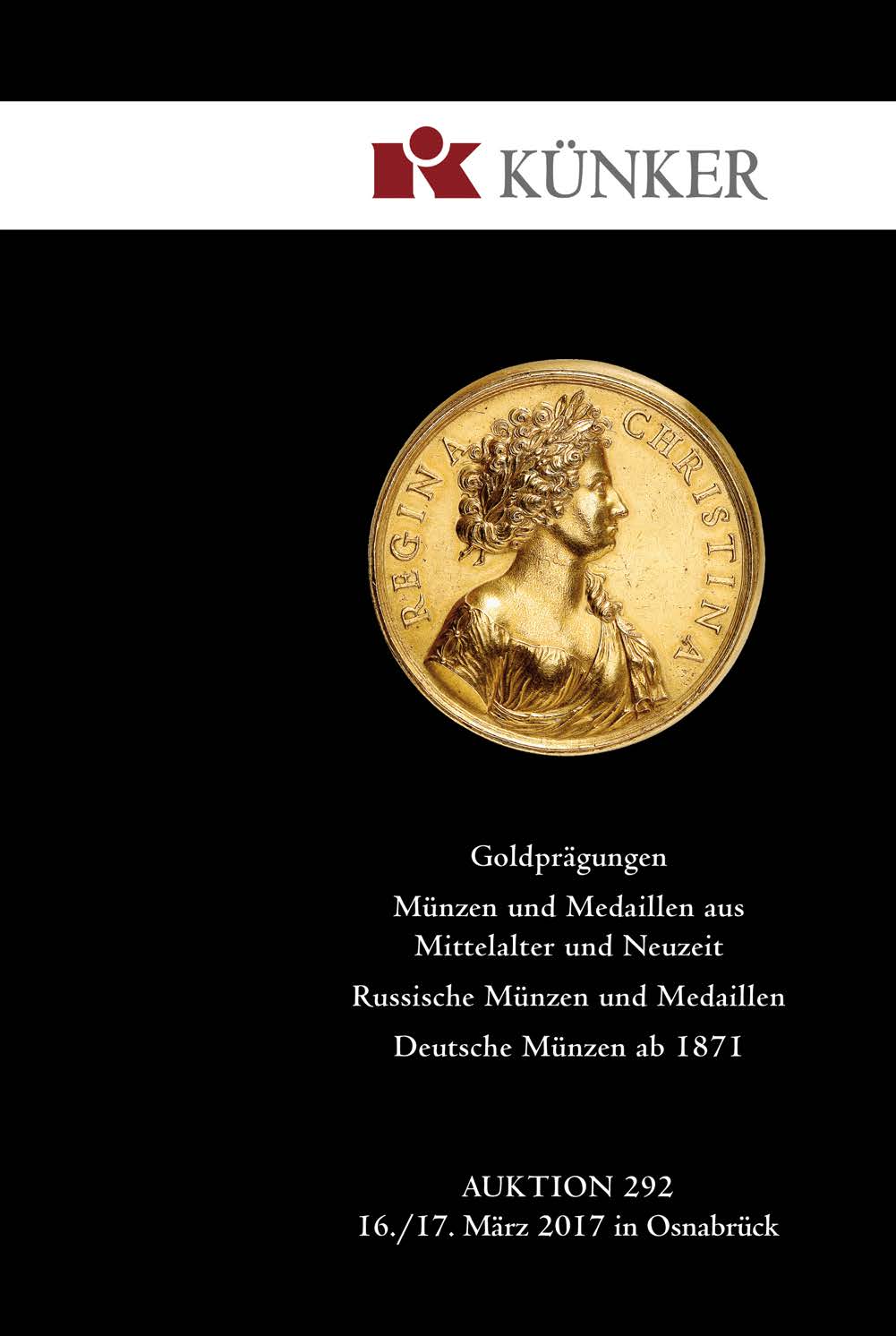 Everybody fond of the finest creations of medallic art will discover more than one specimen that is likely to become the showpiece of one’s collection. Reference may be made here to a gold medal from 1688 on the landing of William III of Orange-Nassau in Torbay as the beginning of the Glorious Revolution of Great Britain. With a highly interesting pedigree comes a Swedish gold medal of 40 ducats no date (around 1685) which tells of the virtues of Empress Christina. It once belonged to Sascha Guitry, the famous French actor and director.

A number of extremely rare coins will also change hands: for example, a 10 scudi piece from 1641 of Charles Emmanuel I, Duke of Savoy, minted in Turin or Chambéry under the tutelage of his mother Christine Marie, a pattern for the Bern konkordatstaler from 1826 of which only 75 specimens were struck, and a quadruple konventionstaler from 1767, issued by Joseph Wenzel von Fürstenberg.

Next in line are 350 lots of Russian coins and medals, of which a part stems from the Marcel Hendrickx Collection. The Belgian architect began to assemble his collection as early as the 1950s and 1960s.

The auction sale will be concluded by an impressive series of post-1871 German coins. Some rare Imperial silver and gold coins will cross the auction block, supplemented by a unique reverse die for a pattern for the 5 DM piece ‘Germanic Museum’. This is a testimony of the utmost numismatic interest.