In 1814, Sir Walter Scott published his first historical novel entitled Waverly. He had chosen a topic, which should still make bestseller-authors rejoice, even to this day: A young prince who tries to recapture his father's kingdom against all reason. He is of course not supported by those in power, but rather by those who live on the edge of society, who are behind in technology but morally superior – the clans. They are defeated by the modern technology of the rulers, but the young prince manages to escape at the last second.

As it turns out, all of these clichés are true. The handsome Prince Charles, Bonnie Prince Charles, as the Brits still call him today, was the last Stuart, who sincerely tried to undo the Glorious Revolution, with the help of the Clans of the Scottish Highlands.

From Künker sale 292 (16 March 2017), No 5695. Medal 1685 on the execution of James Scott and Archibald Campbell after the suppression of the Monmouth Rebellion, which tried to prevent the Catholic James from ascending to the throne.

His grandfather, James II reigned from 1685 until 1689. He was Catholic and had tried to wrest more tolerance towards the Catholics and Quakers from the Protestant establishment. However, this would have meant that traditional higher classes would have had to cede some of their power. Of course they were not willing to do so. Thus they invited the son-in-law of James II, the Calvinist William of Orange, to take leadership. James had to flee.

What did the new royal house think of the Glorious Revolution? One of the medals that are put to auction at the Künker auction 292 on 16 March 2017 depicts the answer. Its obverse shows the new ruler William under the slogan "With God's help and justice". He is revered by the personification of the three kingdoms with its three crowns. With his left foot, William is stepping on the snake of strife and raises a sword as a demonstration of power. On the right hand side there is an orange tree as a talking coat of arms. It bears an escutcheon with the combined coats of arms of England, Scotland and Ireland. The Jesuit confessor of the expelled king is taking flight in the background. He is carrying the child prince in his arm. His toy-windmill alludes to the opposing propaganda had defamed James's II son as the child of a miller. The fact that William's revolution was actually a coup d'etat is entirely omitted by the slogan on the reverse "against the child of mischief".

William was ruling in England and James raised his child and grandchild at the papal court, convinced that the Stuarts were the only legitimate rulers of England. Time was on the revolutionaries' side. William and Mary were succeeded by Anne, who turned the kingdoms of England, Scotland and Ireland – which had only been united by personal union – into the United Kingdom before handing down the reign to George I. George was of German descent, Duke of Brunswick and Lüneburg, great-grandchild of James I and – highly important – a devout Protestant. His son had already ascended to the throne, when the grandson of James II, Charles Edward Stuart, our Bonnie Prince Charles, set out to reclaim the throne of his forefathers.

This had been made possible by the general political climate. France was at war with Great Britain yet again. And it would have been wonderfully convenient to substitute George II with a Catholic Stuart, much obliged to France. The French fleet that should enable Charles to invade was already in place, but then a storm ruined the plan. Thus Charles, who was only 24 years old at the time, landed in Scotland with only a few companions. He then had to surround himself with an army. 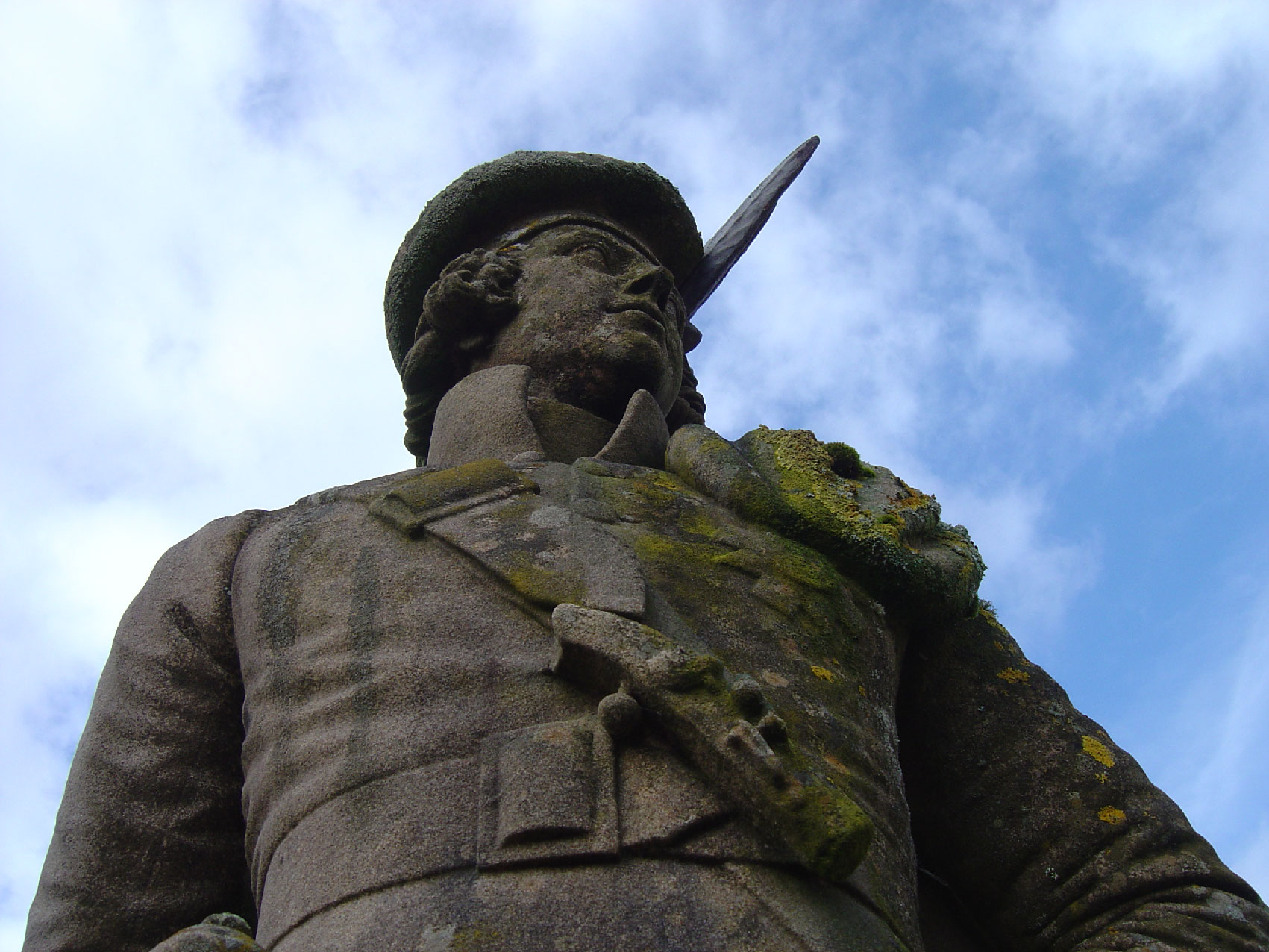 In the 19th century, an impressive memorial was built where Bonnie Prince Charles had claimed his right to the throne. Photo: Kutsa. CC BY 3.0

Charles found support at the Clan chiefs of the Scottish Highlands. No matter Protestant or Catholic, they were unhappy with the unification of Scotland and England. They supported Prince Charles, at first during the capture of Edinburgh, then in the Battles of Prestopans and Falkirk Muir. It was only when the Duke of Cumberland, the third and youngest son of George II stood against them at Culloden that their winning streak ended abruptly.

How the Hanoverians perceived this victory can be seen on a gold medal that will be put to auction at Künker in Osnabrück on 16 March 2017. It depicts the portrait of William Augustus, the Duke of Cumberland, on the obverse. He is also shown on the reverse in the centre of action. He appears as Heracles dressed in the skin of a lion, standing by the virgin Britannia, who is armed with spear and shield. With his right foot he is stamping down mischief – a greyish Medusa, practically throwing snakes. The inscription reads: He chases him [Charles] out of England for high treason. He defeats him at Culloden. 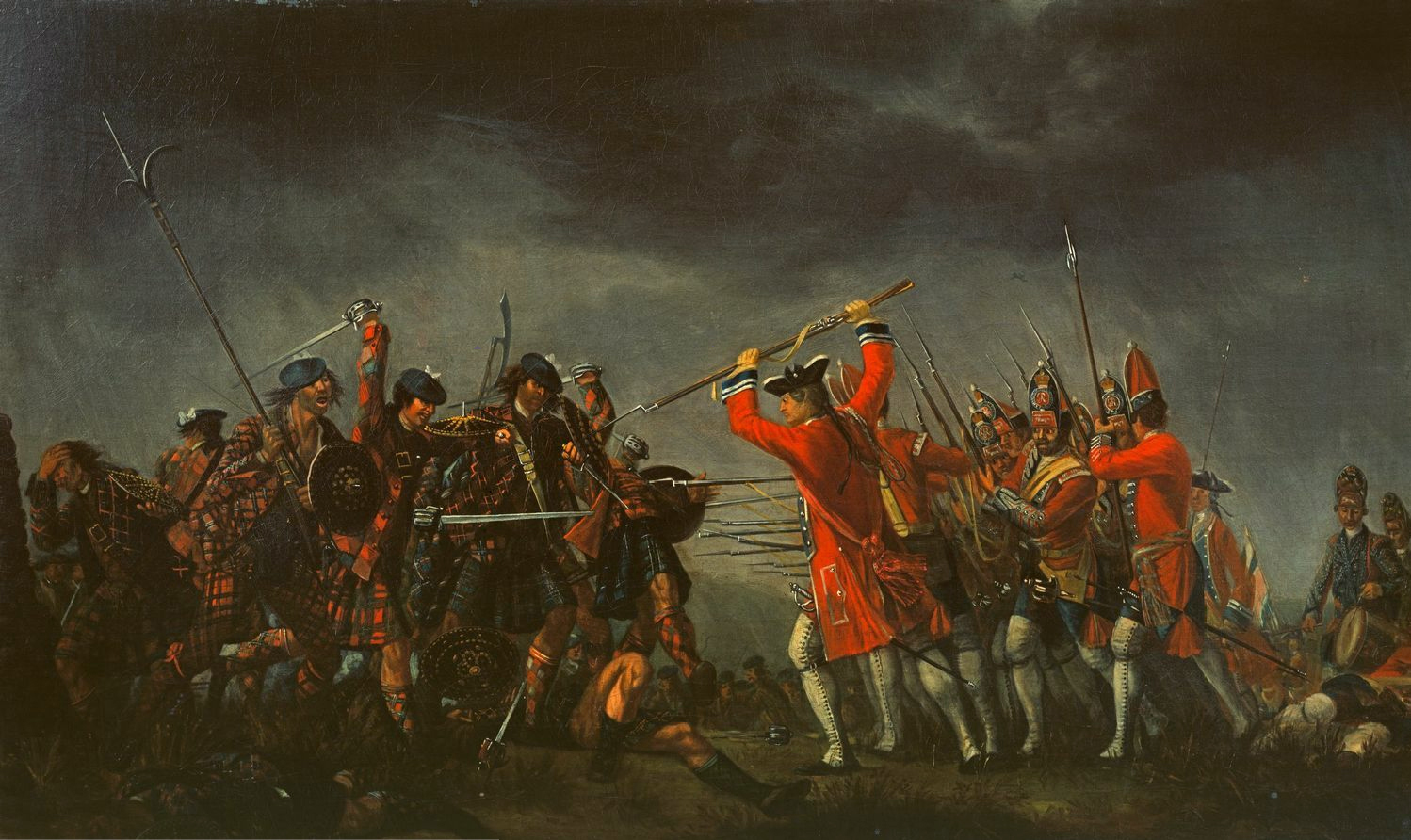 The Battle of Culloden. Painting by David Morier, 1746

Numerous films, novels and songs show how the supporters of Bonnie Prince Charles experienced his defeat and escape, dressed as a girl in a tiny fishing boat. To this day they still glorify the last Stuart, while the victor of Culloden went down in history as the "butcher". And even today, the Scottish are still proud that no one in the army of the Highlanders tried to win the head money that the English had offered for Charles, which was as high as 30,000 pounds – a remarkable sum at that time. Even a modern blockbuster like "Highlander" cannot do without the Skye Boat Song, probably the most famous folksong on the escape of Bonnie Prince Charles.

Sometimes, fairy tales are prettier than reality after all. And thus we will withhold that Charles became a drunk after his escape and his Scottish mistress left him because of it. Charles died in 1788 after a stroke at the age of 67. By then, little was left of his former handsomeness.