Anyone who, during the 60s decade of the previous century, took part in one of the larger English horse auctions may have been surprised to learn that calculations there were still made in guineas, in spite of the fact that the last British guinea had been minted in1813. Nonetheless this denomination stood, like no other, for the aristocratic attitude towards life in Great Britain as the nation grew into its role as administrator of a worldwide empire. 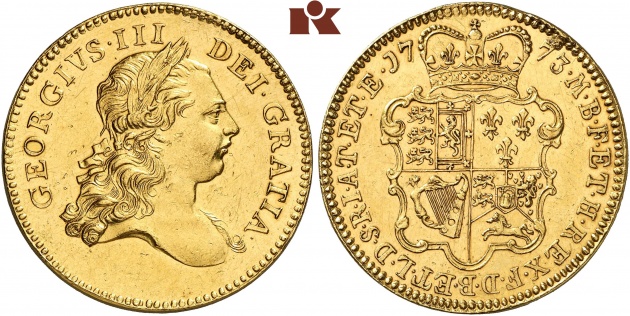 On March 27th, 1663 the English King declared the guinea to be the official means of payment. This was only one of many measures enacted by Charles II affecting the minting of coins. A bit earlier he had ordered the entire coining operation converted from hammer- to mechanical minting. It was said that the embarrassing discrepancy between coins of French manufacture, which Charles II had come to know during his exile, and the English elaborates had prompted the newly-returned King first to hire a French technician named Peter Blondeau, and then to buy new machines with a value of 2,710 pounds. With them, English minting was revolutionized.

One of the new denominations was the five-guinea coin which, exactly like the one-guinea piece, showed the royal portrait on its face, and the dominion’s armorial bearings on the reverse. It is worth taking note of the small elephant under the ruler’s neck area. It offers – exactly as does the coin’s name – a clue regarding the source of the gold for the minting.

Earlier, in 1618, the English King had authorized a trading company to conduct trade with western Africa. Preferred trading partners were the Ashanti in Guinea, today a part of Ghana. The logo of the “Company of Royal Adventurers of England Trading to Africa”, responsible after 1663 for this trade, displayed an elephant with a tower on its back. This image, or a simplified version without the tower, can be seen on the first Charles II five-guinea piece from the year 1668.

As to how the new coins were produced, that is reported to us by a visitor to the mint, the diarist Samuel Pepys. He writes that metal strips were cast, in order to give them the proper thickness with the stretching machine. This system was powered by horses, whose never-ending efforts kept a kind of mill going in the cellar under the minting hall.

Following the punching-out of the blanks by means of the screw press or “balancier”, it was time for the edge lettering. It was the most important security device of its time, and Blondeau swore all of his workers to secrecy with the strongest oath. Not until after the application of the edge lettering did the stamping follow, once again in a screw press. Changing the planchtes between two blows was work not without its risks, but legend says that there were men who could simultaneously read the newspaper.

The five-guinea piece remained for more than 100 years the highest coin denomination which Great Britain had to offer. Although its original value was 20 shillings, the value now varied according to whether the price of gold rose or fell. Nor did the source of the gold remain the same. Following the attack on the Spanish city of Vigo, Queen Anne proudly ordered “VIGO” written upon her five-guinea coin, just as George II had imprinted his coinage of 1746 with the word “LIMA”. While Lima had not been attacked, Captain George Anson had, on the occasion of his sailing around the world, taken rich plunder as a royal pirate, which could then be distributed among the people. And “LIMA” simply sounded nicer than “PIRATE PLUNDER”.

In any case, George II was the last British monarch to have five-guinea pieces minted in a major way. From the reign of George III there remains only an extremely rare trial pressing for a five-guinea piece, which was never produced.

With the coin reform of 1813 this denomination was rendered obsolete. The guinea made way for the sovereign. Only a few nostalgic aristocrats continued to conduct their accounting in guineas, when they visited their tailors or auctioned off a horse. And although the pound is indeed the accepted currency these days at horse auctions even in Great Britain itself, there are still horse races which bear the name “1,000 Guineas”. 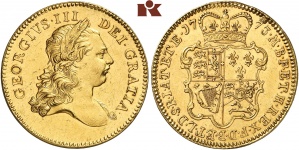