"Trade coins”, so the definition of Frederick Freiherr von Schrötter in 1930, “Trade coins are for the most part coins that could be produced by the government, who guarantees for their standard, but which, on the other hand, are not legal tender, meaning that they are not linked to any obligation to accept them as payment.” Hence, trade coins are coins issued by the state as quasi bullion coins for foreign trade. They normally do not fit into the coin system of the issuing state because they are produced in accordance with the monetary conditions of the area they are intended to circulate in. Obverse and reverse of these special coin series often exhibit an interesting design, as can be witnessed with Prussia, too.

Frederick II began producing trade coins in 1751. His first, rather ambitious, issue was intended for the trade with China (fig. 1). Since the affiliation of East Frisia in 1744, Prussia was able to make use of Emden as harbor in the Baltic Sea. He intended to send Prussian-flagged ships to China and import tea, porcelain and silk. To that end, Frederick II initiated the foundation of the ‘Royal Prussian Asiatic Company’. Since the Europeans knew that the Chinese were only willing to deliver their goods in exchange for good silver, the King had Prussian piasters minted between December 1751 and February 1752. In regard to their weight and fineness, these silver coins conformed to the Spanish pesos that enjoyed great popularity in China. The splendid pieces featured the portrait of the King on their obverse while the reverse showed a composition of a wild man and a Chinese holding a shield exhibiting a bark. Above that scene, an eagle spreads out its wings. Below, there is the monogram of the trade company.

The Chinese are said to have accepted these pieces straightway, as President of the Chamber Lenz proudly reported to the King later. Several more successful journeys were conducted until the Seven Years’ War put an end to that business. 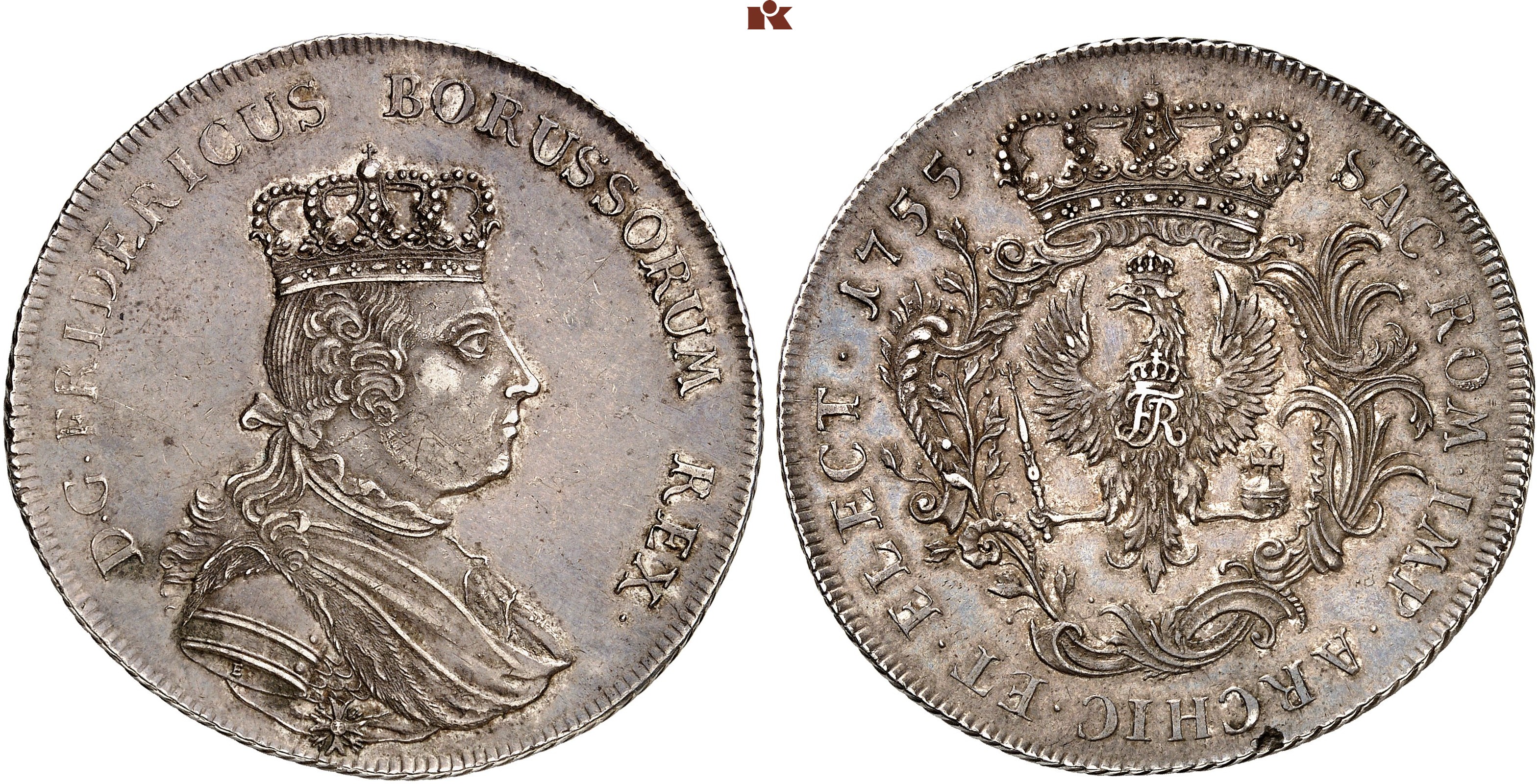 Shortly before the Seven Years’ War, Frederick II had struck the rarest Prussian trade coin of all, the speciesthaler of 1755 (fig. 2). The reason for its being that rare is that it was never uttered due to its ‘failed’ portrait. The King didn’t see himself with a crown. Such royal a demeanor was at odds with his self-projection as a philosopher. It was important for Frederick that the foreign countries regarded him as such. And the speciesthaler’s aim was to rival the Saxon-Polish thaler of Frederick August III and to circulate on an international level as trade coin. Except for three pieces that survived purely by chance, Frederick had the entire emission melted down, which bears witness to the fact that then coins and their pictures were a matter for the boss.

The production of speciesthaler was no longer pursued because of the outbreak of the Seven Years’ War in 1756. However, one year after Frederick had died Minister von Heinitz had 16 specimens produced with the original dies for exalted coin collectors. One of these 16 pieces will be available for sale at Künker’s. This coin not belonging to the first emission becomes clear by a look at the edge. While the original pieces from 1755 exhibit a foliage rim, the restrikes have a notched rim. 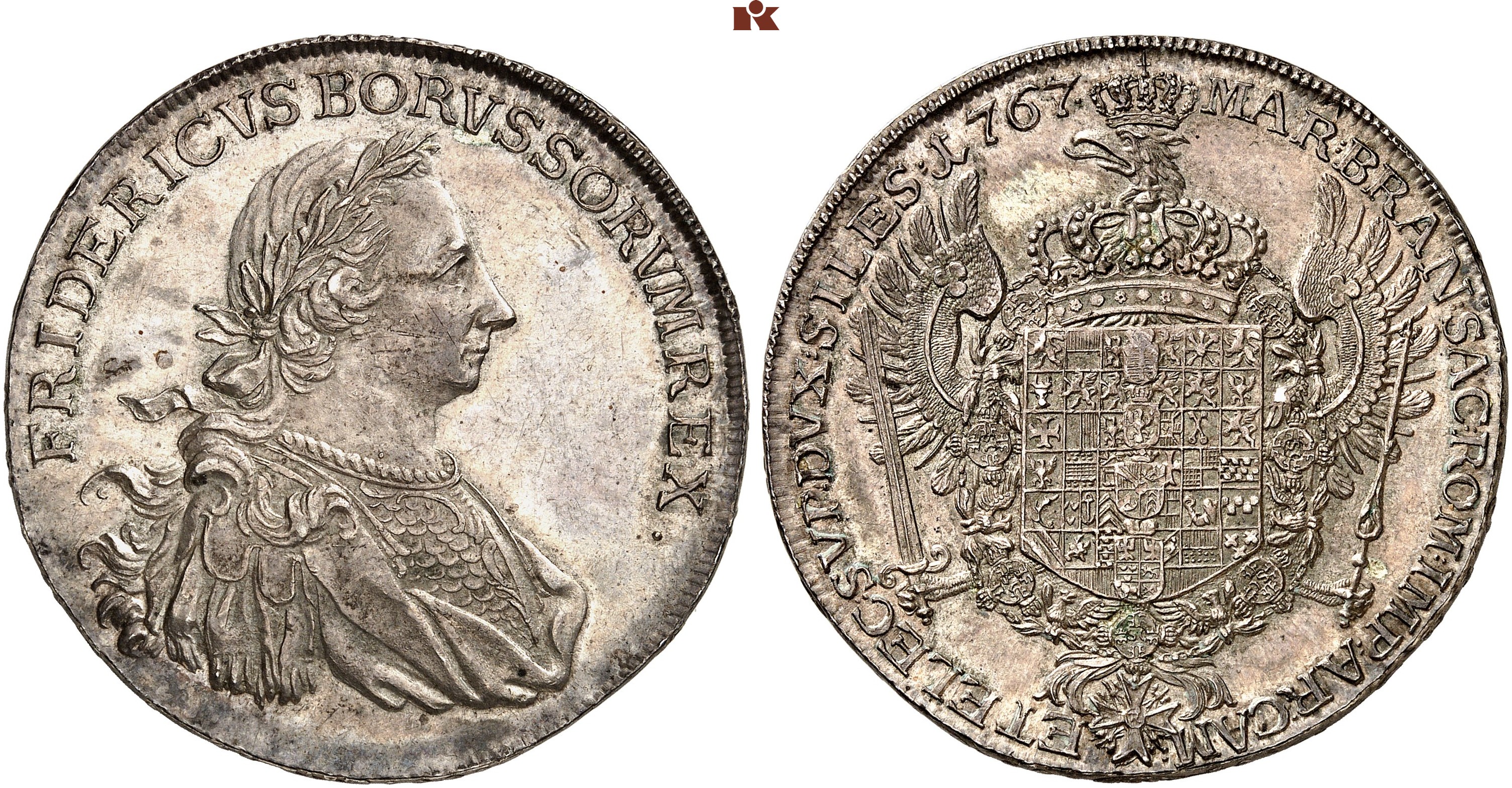 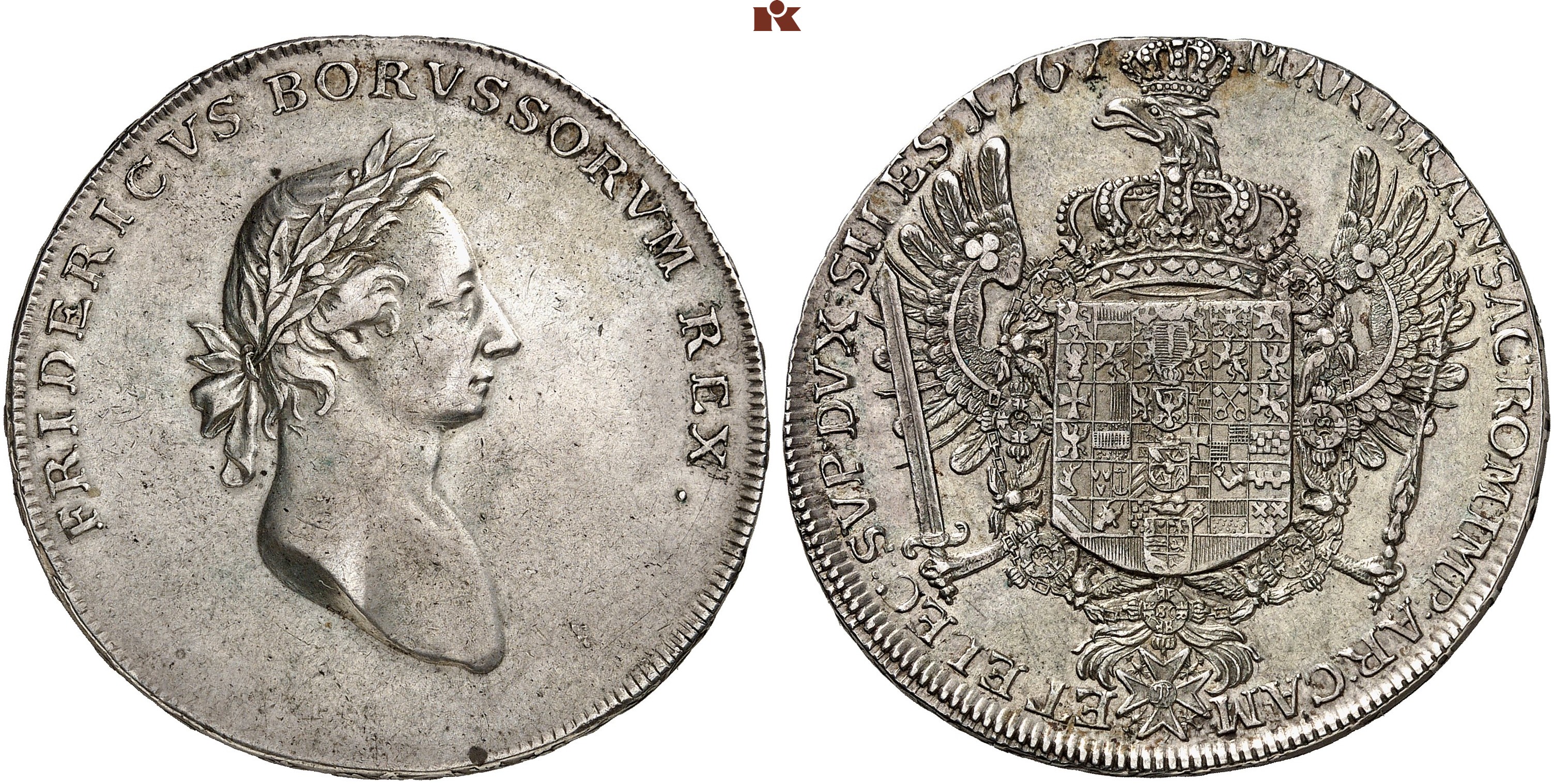 Two years after the end of the Seven Years’ War the ‘Levantinische Handels-Compagnie’ was established. Its purpose was to rival the highly successful Austrian commerce in North Africa. For getting a suitable trade coin, a Prussian levantethaler was issued that followed the Maria Theresien thaler. It adopted the reverse type and differed only in the portrait on the obverse. Frederick is depicted there wearing the laurel wreath known from the Roman emperors. Whereas the specimens exhibiting the lavishly draped bust from 1766 are relatively easy to come by, the type with the undraped bust from 1767 is called pattern due to its rarity.

By order of the banking house Schweigger and for Salomon Meyer Levi Prussian albertusthaler were produced between 1766 and 1767 (fig. 5). Frederick II only gave his permission afterwards, on 3 March 1767. Albertusthaler were mainly used in the commerce in Eastern Europe where the model from the Spanish Netherlands was popular.

The Prussian bankothaler likewise is often referred to a trade coin. It was, however, intended to serve the opposite purpose, hence saving! The bankothaler was created and issued as main depot coin by the ‘Königliche Giro- und Lehnsbank’ in Berlin in 1765. That is why this coin type was not  included in our list, even though there was a magnificent specimen actually available for sale in the Masuren Collection…