The martyrdom of St. Stephen

It is kneeling St. Stephen who is featured on a bracteate, clad in his gorgeous liturgical vestment. The coin is part of the Professor Helmut Hahn collection, it is estimated at 7,500 euros and will be auctioned by Künker at the Berlin sale on February 1, 2018. The elaborate piece was minted by Ulrich von Reinstein, Bishop of Halberstadt, between 1149 and 1160. After all, the saint had a special meaning for him. St. Stephen was the dedicatee of the cathedral that served as resting place for some of his relics. 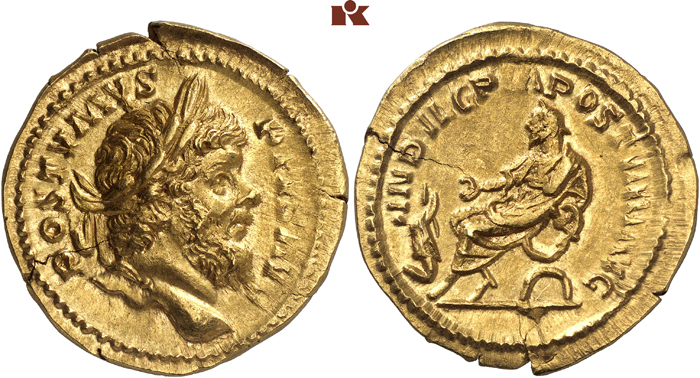 Our bracteate illustrates the martyrdom of St. Stephen as we know it from the Book of Acts, chapter 6 and the following: Stephen had preached that Jesus of Nazareth would destroy the temple and alter Jewish customs. This was considered blasphemy, and so the Sanhedrin condemned him to stoning, as this was the then customary punishment. This stoning can be seen on our coin: The kneeling saint has raised both hands in prayer. His tonsure and his clerical robe – the dalmatic – mark him as a deacon. Above him is God’s blessing hand. Behind him are his executioners, throwing stones.

Who these aggressive attackers are? To the viewer of medieval times, they were clearly identifiable. They wear pointed hats which at the time served as iconographic symbol for Jews.

With this bracteate, we are in the years 1149-1160, thus in an era which was certainly not characterized by repeating anti-Jewish pogroms and expulsions. Christian and Jewish citizens were still living side by side, even though the differences between them were clear to see. In the middle of the 12th century there were certainly neither ghettos nor regulations as to where Jews were supposed to live, but every Jewish house was marked as such by the mezuzah attached to the right doorpost. What’s more, ropes or rods demarcated the area in which the Shabbath rest was observed.

Jews hardly differed from Christians in their outer appearance, at least when on the street. The many dress codes we hear about mostly date to the late Middle Ages. Nevertheless, as our bracteate proves, the pointed hat had already become a standard iconographic detail to denote Jews. Was it worn in everyday life? We don’t know. It was to get a signaling function as late as the end of the 14th century when it also became charged with negative associations. For example, when a Christian was sentenced in Seligenstadt for breaching the prohibition of receiving interest in 1390 – that is about 250 years after our coin had been struck –, he had to walk barefoot around the church wearing a pointed (Jewish) hat.

At the time of our bracteate the Jewish community formed an integral part of urban life. If, for example, the bishop or even the emperor moved into Halberstadt, the Jews would honor him during his solemn entrance into the city by their presence – at eye level and not through a gesture of submission. This was because the Jewish community was protected by Jewish privileges, for which they paid considerable taxes, of course. Nothing unusual at this time. Everyone who received a privilege gave money in return.

Can we thus call this coexistence a peaceful idyll? Certainly not, for both Jewish and Christian clergymen demanded the two groups to be strictly separated. The Jewish side prohibited intermarriage and laid down many dietary laws, which were surely difficult to observe when inviting or being invited by a Christian. And the Church had enacted laws to prevent any contact already in late antiquity. Within the framework of the 1179 Third Lateran Council, these were reformulated although apparently they were not rigorously enforced as we hear of punishments for breaking these rules only as late as the 15th century.

However, times were changing, and this is what this bracteate stands for. He stylizes two Jews as murderers of St. Stephen, thus recalling the Church’s doctrine to view the entire Jewish community as Christ killers.

This doctrine was widely distributed as late as 1096. 1096 is known as the year when the First Crusade began. Countless preachers traveled throughout the country, stirring up Christian hysteria and hatred of dissenters, which made thousands of people leave their homes and pilgrim to the Holy Land. If someone thought this place too far away, he could well start ruminating: Why not kill those who – at least if the preachers were to believe – had crucified Christ right on the spot? German Count Emicho von Leiningen was one of the most brutal advocates of this approach. Countless Jews were killed under his command.

But not everybody shared Emicho’s hatred of Jews. There were certainly judicious people among the citizens, and there were the authorities which provided moral and military protection. After all, the Jewish communities were important for the empire’s prosperity. Both the attackers and defenders of the Jews had their arguments. However, it was left to Emperor Frederick I to place the Jews under his (preliminary) effective protection when he prepared the Third Crusade. This protection, however, did not last.

Waterspout from Alsace, about 1300. The caricature of the Jew wearing the Jewish hat and holding on to a purse in his right hand is clearly visible. Today at Unterlinden Museum, Colmar. Photo: KW.

Our bracteate was created in this era of transition. Even if the Jews featured are recognizable as Jews, they lack the defacing elements that late medieval and early modern works of art exploit to collectively brand the Jews as murderers of God. Nevertheless, this bracteate is a good example of how dangerous it can be to not view the individual as a perpetrator and victim, but make generalizations.

For in terms of chronology, our bracteate stands at the beginning of innumerable persecutions in which Jews were scapegoated – by their fellow citizens filled with hatred and fear, and by a merciless authority.

By the way, it was not until 1965, in the context of the Second Vatican Council with the memorandum Nostra aetate, that the Catholic Church officially repudiated the charge that the Jews were collectively responsible for the death of Christ. Sometimes it takes longer for reason to prevail.