On 12 August 1897, the foundation stone of a new bridge was laid, which should connect the Saint Petersburg Field of Mars to Trinity Square. It was not just the tsar and tsarina who came for the occasion. The French president Félix Faure had travelled all the way from Paris, too. After all, the Trinity Bridge or Troitsky Bridge was no ordinary connection of two riverbanks. It was built as a symbol of the French-Russian alliance, just like its counterpart, the Pont Alexandre III, which still amazes many visitors of the city at the Seine. 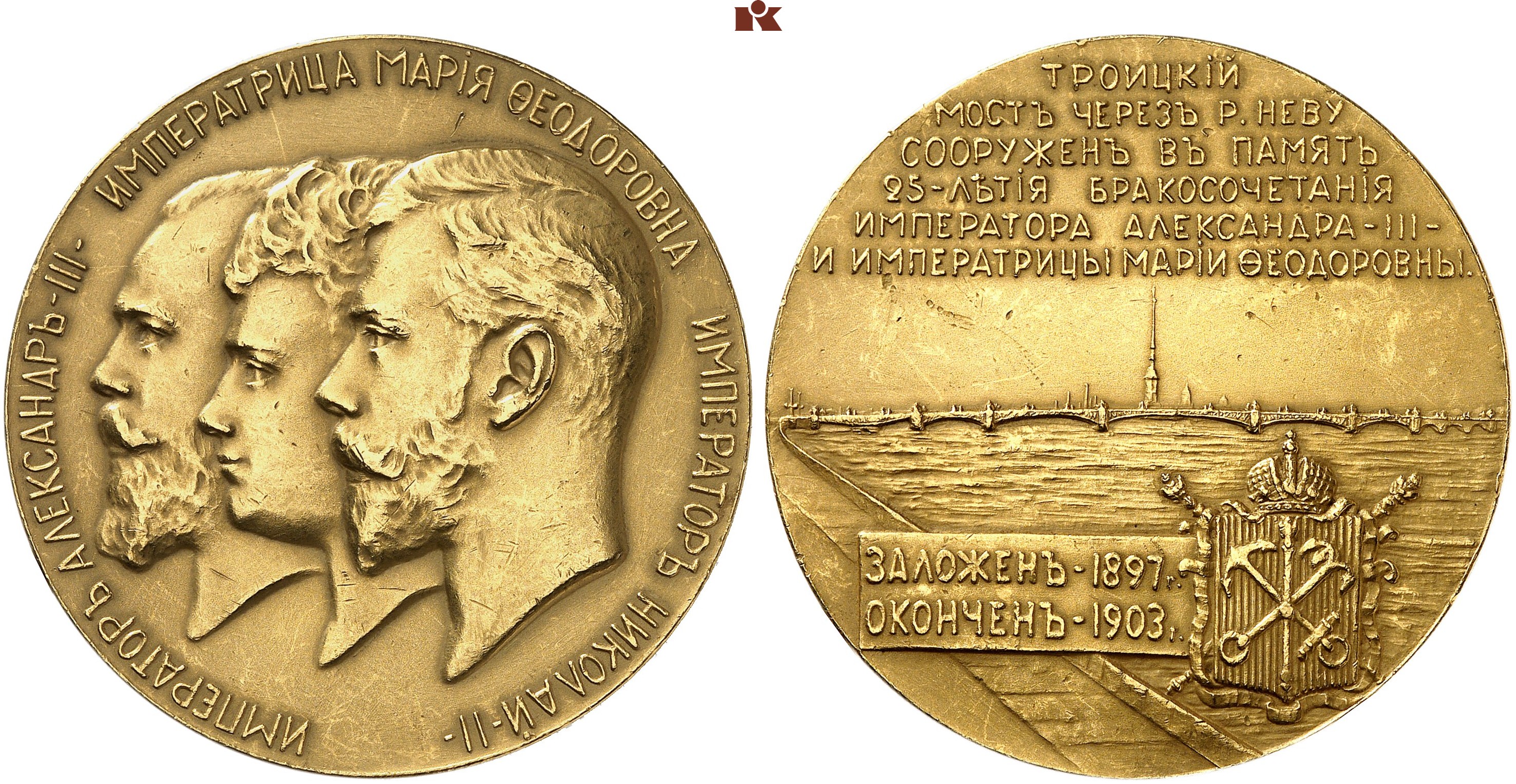 In order to understand the symbolic effect of this event, we have to go back in history for a bit and take a look at the foreign policy of the German Empire. An alliance between France and Russia was Bismarck's nightmare. If they joined forces, he feared, these strong military partners could encircle the German Empire. He thus avoided doing anything that would anger the Russian partner and drive it into the arms of France.

But Bismarck was overlooking the economic aspect: The French bourgeoisie had capital at their disposal and they were looking for opportunities to invest it. Russia on the other hand needed money. Consequently there already was an economic collaboration between the two, when the German Empire renewed the Triple Alliance between Austria-Hungary and Italy on 5 August 1892 and thus gave France and Russia a reason to form a military alliance. 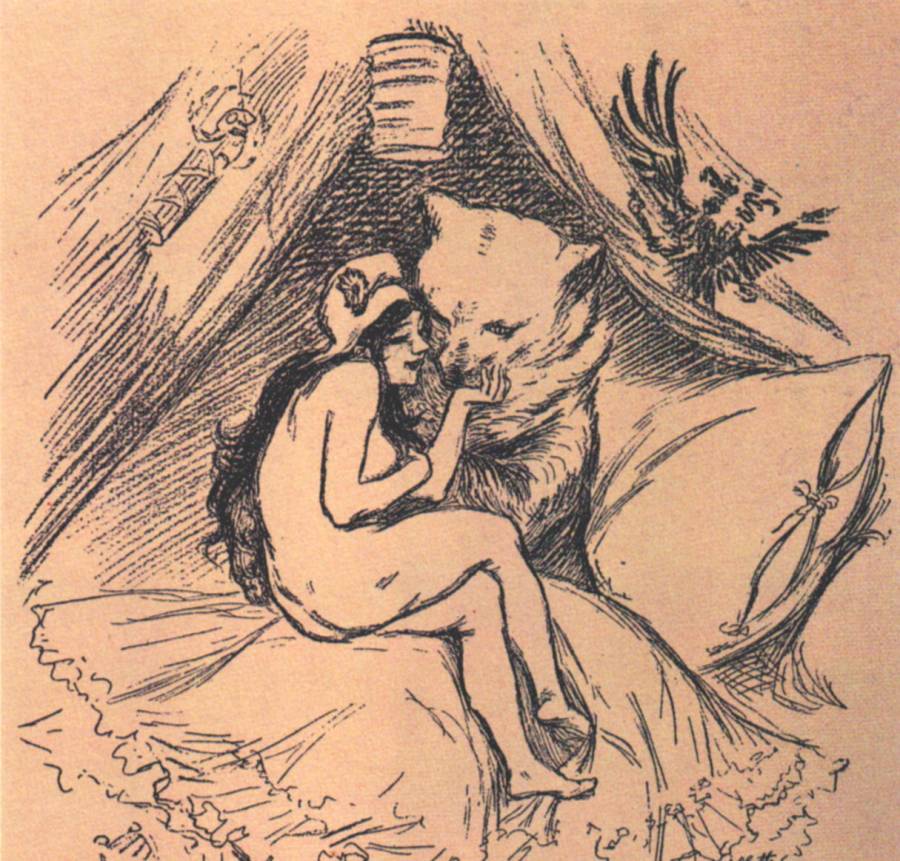 Contemporary cartoon from the French newspaper "Soleil". Adolphe Wilette draws the French Marianne in a tight embrace with the Russian bear. The caption reads: If I return your love, will you lend me your fur for the winter?

The military alliance was followed by a close governmental cooperation. The Russian tsar Nicholas II travelled to Paris in October 1896. He laid the foundation stone for the magnificent Pont Alexandre III there, which was named after his father, who had concluded the treaty with France. 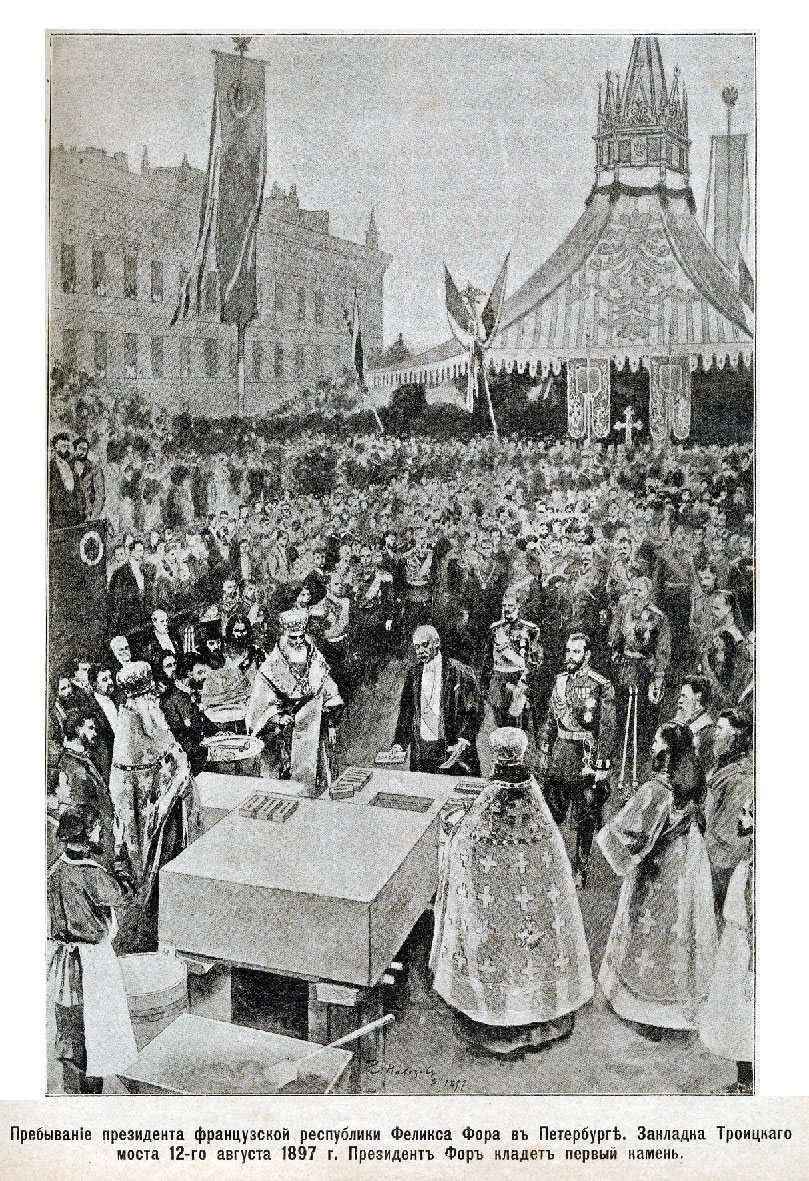 Laying of the foundation stone of the Trinity Bridge. At the centre: the French president Félix Faure with tsar Nicholas II at his right.

During his first visit, Nicholas II probably negotiated with the Société de Construction des Batignolles, because the tsar wanted a new bridge as well. There had already been a contest for the connection between the Field of Mars and the Troitskaya Square over the Neva as early as 1892 and Gustave Eiffel had won it. But in 1896 he was no longer in line as engineer for the project. He had been found guilty of embezzling money during the failed construction of the Panama Canal in 1893. The Société de Construction des Batignolles, which was highly internationally active at the time, was thus hired to build the bridge in his place. As mentioned before, the president of the French Republic came to witness the laying of the Foundation stone.

The completion of the Trinity Bridge was ostentatiously celebrated on 16 May 1903, at the peak of the celebration of the 200th anniversary of Saint Petersburg so to speak. The inauguration began with a big procession including members of the imperial family. The tsar himself was the first to push the button to set the motors lifting the drawbridge in motion. Since the bridge could be lifted, it still allowed for big ships to go up the Neva. After consecrating the bridge as the highest official of the clergy, the tsar was given a gold medal by the mayor. Such a medal is offered by Künker in the Berlin auction 302 on 1 February 2018. The tsar also received an album with photographic documentation of the construction process. 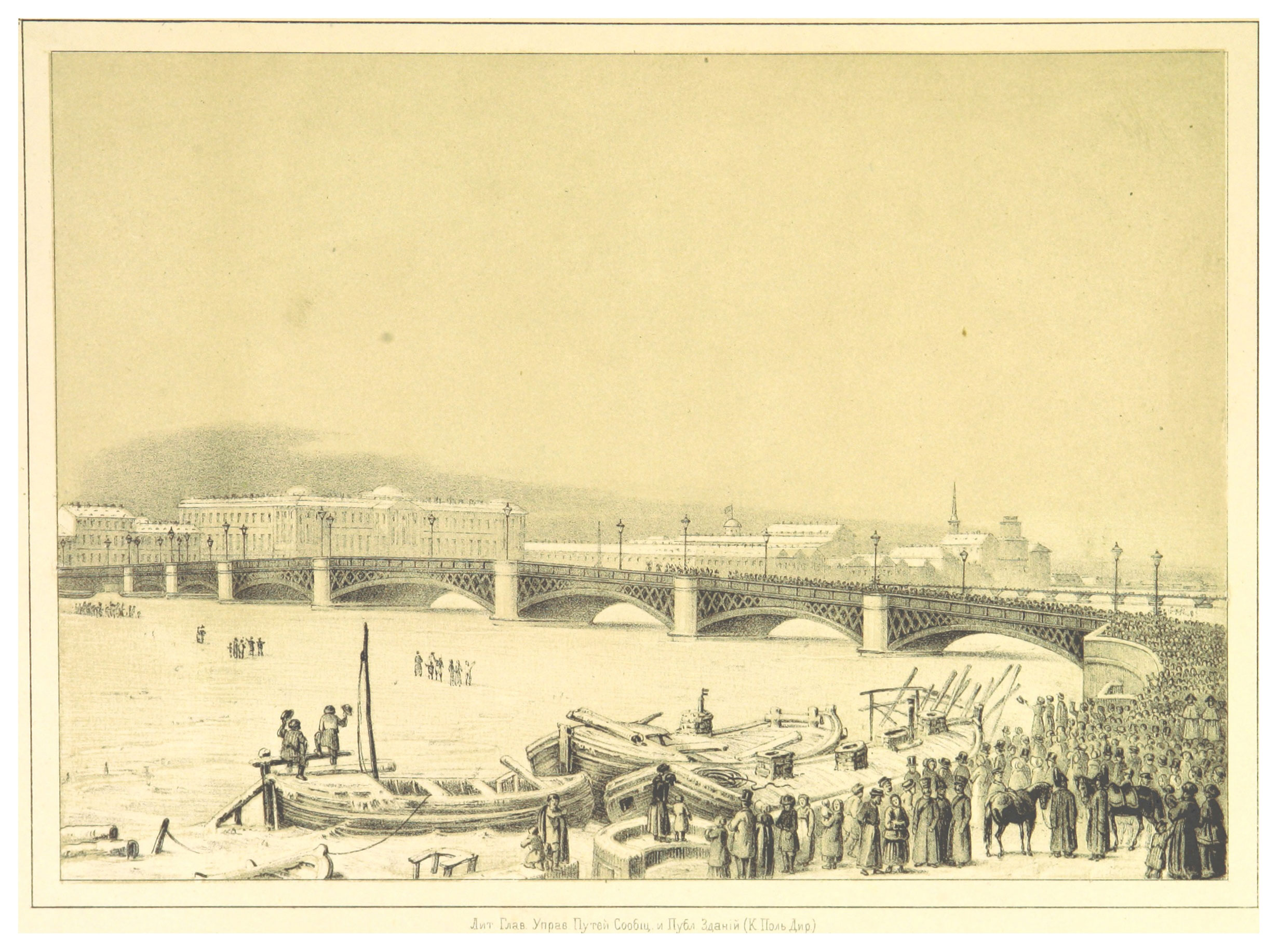 In 1903, when the bridge was inaugurated, there was admittedly no talk of France any longer, even though the Russian tsar was becoming increasingly dependent on the French Republic because of all the French money that was generously flowing towards Russia. This is indicated by the inscription of the medal. It reads: The Trinity Bridge was built to commemorate the 25th wedding anniversary of Emperor Alexander III and Empress Maria Feodorovna. Founded 1897. Completed 1903.

Nevertheless, when the Austrian heir to the throne was assassinated in Sarajevo and the First World War began, France and Russia were on the same side.