In 1694 Frederick Augustus I ascended the throne as Elector of Saxony, when his brother Johann Georg IV died surprisingly after reigning for only three years. Augustus the Strong, as he liked to call himself, was well educated for the tasks which awaited him. He had benefited from outstanding teachers, had traveled the world for three years with his eyes wide open, and had even proven himself as a military commander.

Frederick Augustus was highly gifted and unbelievably ambitious. “Little” Saxony was not enough for him. He wanted to be a player in international politics. Only three years after his accession to the throne he had got an outstanding opportunity: on June 17th, 1696 the Polish king died. As was the common practice in Poland, his son did not automatically succeed him. Poland had an Elective Monarchy. In 1696 the approximately 100,000 eligible voters of Poland could choose between ten candidates, among them Frederick Augustus I.

The election took place against the background of the War of the Spanish Succession, which had pulled all of Europe into its vortex. On one side stood the French who, with huge sums paid in bribes, managed to get their candidate the Prince of Conti elected on June 26th with four-fifths of the votes cast. The next day the same vote took place once again. This time Augustus the Strong, the candidate of Russia and the House of Habsburgs, was elected with half of the votes. To be on the safe side, he had not only converted to Catholicism, he had also bribed heavily. His Court Jew Issachar Lehmann had, on his orders, sold or pledged all Saxon enclaves and thus raised millions of guldens in liquid funds, which had now landed in the voters’ pockets. Thus there were two elected kings. However, Augustus had the more powerful army on location, an outstanding argument in the Age of Absolutism. Conti had barely reached Danzig, as Augustus was crowned King of Poland in Krakow on the 15th of September under the title Augustus II.

A grandiose medal by Georg Hautsch celebrates this coronation. Augustus the Strong is represented as Hercules, who is depicted placing his foot upon the many-headed Hydra. Hercules was regarded in the baroque era as the model of a perfect ruler who, at the crossroads, decided against the broad path of vice and in favor of the narrow path of virtue. For that reason alone, according to the conviction of the time, the half-god was able to triumph over all resistance. This representation gives us a good insight into the way Augustus the Strong, here seen accepting the crown from the hand of Polonia, saw himself -- as the indefatigable laborer, who would win great fame for his reign through his diligence.

The people of Poland, of course, saw things differently. Poland was an agrarian nation with 12 million inhabitants, who were ruled by some 100,000 minor nobles. They could not warm to the German efficiency with which Frederick Augustus planned to modernize their country. While the Polish magnates were proud of their republic, their new king attempted to strengthen centralized power at the expense of the nobility. The conflict was pre-programmed.

Bad foreign policy decisions also played a part. Augustus’ lifestyle, in which copious amounts of alcohol combined with a large number of women featured prominently, harmonized perfectly with that of Peter the Great – who was, unfortunately, now the ruler of Russia and naturally opposed to a strong Poland. Nonetheless the rulers found things to like about one another and concocted plans. It was hoped that some European possessions could be taken away from Sweden, where a young and inexperienced King had just assumed the throne. No one had any idea at the time that Charles XII of Sweden was an exceptional military talent, who within a short time would bring Russia and Poland under such pressure that he would be able to present Poand with an ultimatum: either they must remove Augustus as King, or Charles would make war on Poland.

A large group among the Polish nobility considered this a provocation and moved to support their King more strongly than they could ever have previously imagined. By a small margin, however, Stanislaw Leszczynski was elected as their new ruler on July 12th, 1704. With that move, the most favorable possible conditions for total war between all parties were created. Not a single city in Poland was spared the plunder which followed, before the victorious Charles XII enforced the Treaty of Altranstädt of September 24th, 1706. Augustus was forced to relinquish the throne, Stanislaw Leszczynski was recognized as king, and the alliance with Russia was dissolved.

A reichstaler from 1709 shows the propagandistic use to which Augustus put this defeat. He continued to refer to himself as REX, King, both in the legend on the face and on the monogram of the reverse. What he might be king of was not revealed on the coin.

In the same year, Poland reached a turning point. Leszczynski had been able to be king only with the support of Sweden. But the defeat at Poltava ended Charles XII’s triumphant sweep. He fled to the Turks, and Leszczynski was left with no other choice than to go into exile. Augustus returned, and renewed his alliance with Peter. However the two rulers had long ceased to be equal partners. The Russian Czar insisted on keeping Poland weak. In the “Silent Sejm” of 1717, the 1648 political status was restored without discussion, but unfortunately that status was now utterly inadequate for coping with the changes which had ensued and resulting new challenges. Problems were inevitable. Nonetheless, Russia deigned to be reimbursed for its dictated terms with the surrender of Livonia and Courland.

Deep dispiritedness among Poland’s people resulted. Polish historians describe the epoch which followed as a “dark time”. Religious tolerance disappeared. The economy, due to the destruction of war, was in ruins, and education is said to have to have sunk in some areas to levels below those of the Middle Ages.

Thus it did not represent a victory when Augustus the Strong managed to secure the succession as King of Poland for his son. Rather, it was more a prelude to a tragic end. Poland had become the plaything of the great powers, and would be divided for the first time in 1772, when a Polish King failed to adequately take Russia’s interests into account. 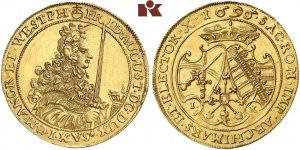 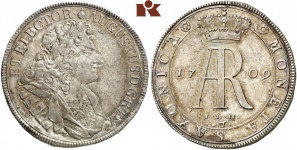 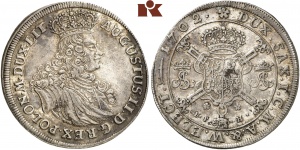