Mainz is one of the cities of the Holy Roman Empire whose formation can actually be traced back to the Romans. It started as a legionary camp which was founded by Nero Claudius Drusus in 13/12 BC in the course of his military campaigns against the Germanic peoples. As the Roman Empire decayed, the bishop took on the position of ruling power. While many cities lost their importance, Mainz remained an urban center, mostly because Saint Boniface, the Apostle of the Germans, had his episcopal see here. Therefore his successors had a special position among German bishops.

Even though the honorary title of Primas Germaniae was never legally bestowed upon the archbishop of Mainz and even though the bishops of Trier and Cologne vehemently denied his superiority, the archbishop nevertheless came to hold a very special position within German imperial politics. 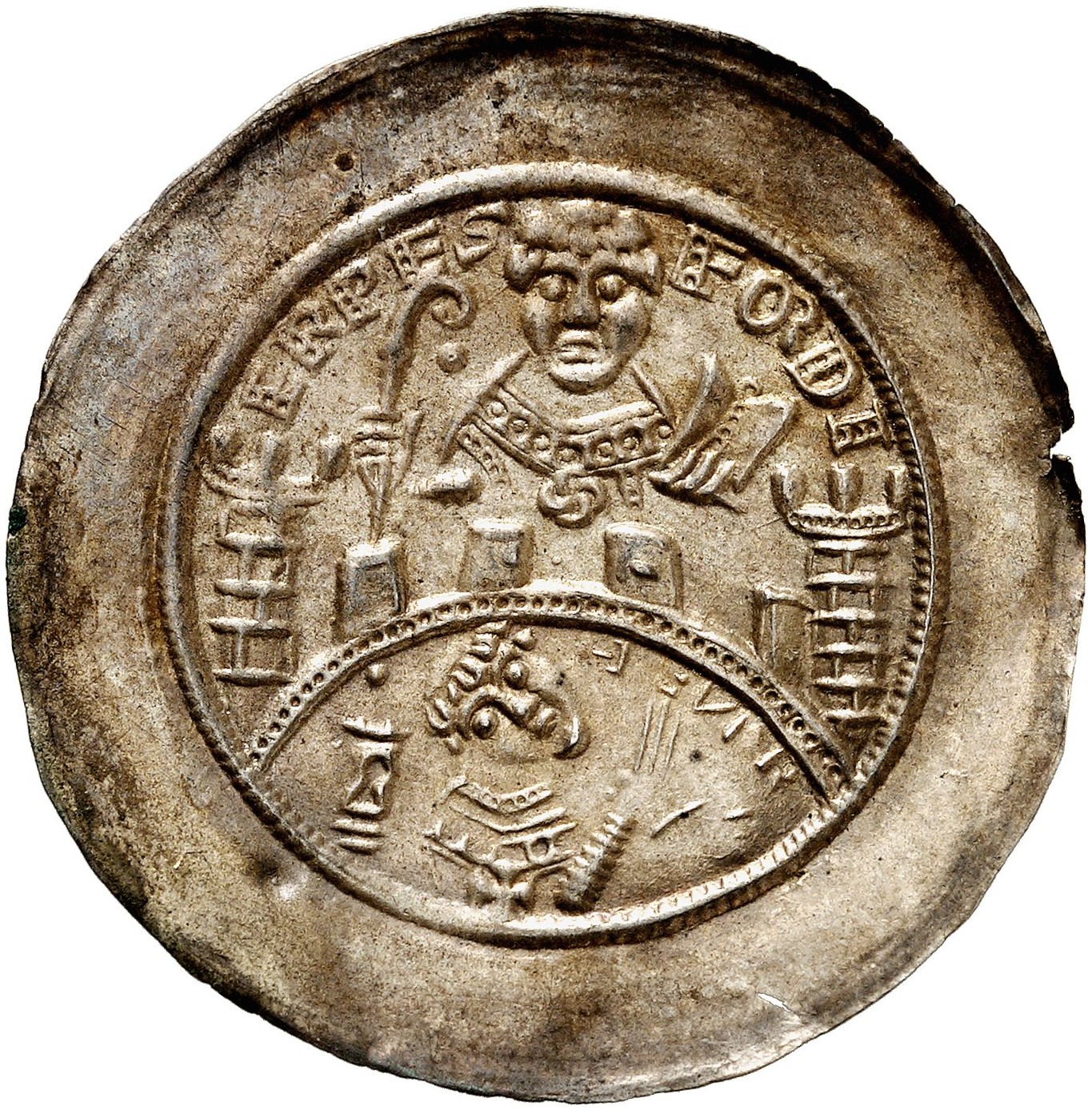 For example Heinrich I. von Harburg, who is responsible for the minting of this Bracteate, was a regent when Konrad III. participated in the fatal Second Crusade. The Bracteate depicts the powerful bishop. No, he is not the man wearing the pontificals and holding the crosier and the gospel. That is Saint Martin, patron of the diocese since Frankish times.

Heinrich von Harburg is depicted with the tonsure in the lower section of the Bracteate. He raises his hands in prayer and therefore presents himself as mediator between the people and Saint Martin.

By the way, the Bracteate was not minted in Mainz but in Erfurt, a diocese which was founded by Saint Boniface and united with the Diocese of Mainz since his regiment. 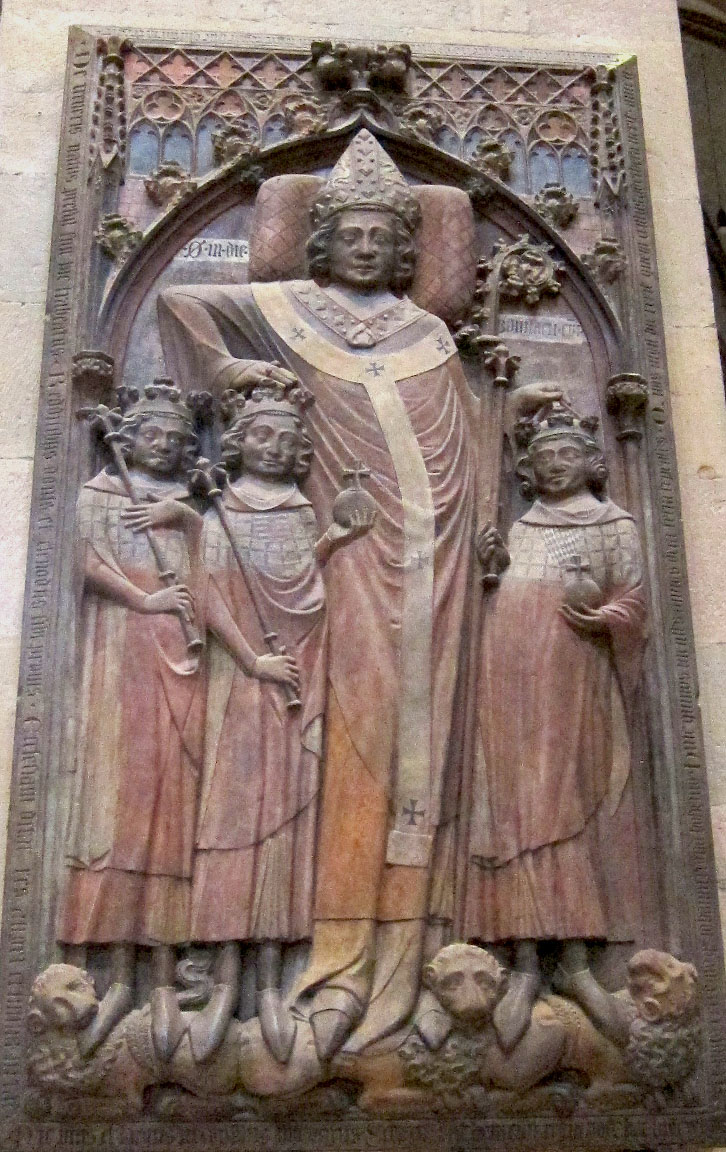 Gravestone of Peter von Aspelt, Archbishop of Mainz, 1306-1320, in Mainz Cathedral. The sculpture depicts him as kingmaker. He promoted the election of Henry VII., John of Bohemia and Louis the Bavarian. Photo: UK.

In 1244, citizens who settled around the episcopal see received town privileges for their community. This means that there were basically two parallel settlements: The city of the bishop and the city of the citizens.

The latter attracted a lot of attention with a brilliant economic project just ten years later. Due to the initiative of citizens of Mainz, 59 important commercial cities allied bit by bit to the Rhenish League of Towns starting 1254. Together they financed a naval fleet on the Rhine in order to protect maritime transport and demanded to abolish a number of customs duties that made all goods transported on the Rhine a lot more expensive. The Rhenish League of Towns demonstrates what a booming economic zone had developed along the Rhine. And of course, this economic area needed a common currency.

In 1346, Charles IV gave the archbishops of Trier and Cologne the right to mint gold coins, in order to ensure their support in the fight against Louis the Bavarian. In 1354, also Archbishop of Mainz Gerlach von Nassau received this privilege. He had been Charles' candidate in the battle over the Archdiocese of Mainz while Louis had supported Heinrich III. von Virneburg. In the end of 1353, Heinrich died and Gerlach was able to occupy his diocese.

Gerlach von Nassau began to mint gold gulden according to the Florentine model in Eltville which then belonged to the territory of Mainz.

Around 1365/0, the first gold gulden of Mainz were created which featured a new motive. This means the archbishop of Mainz was the first to produce a coin whose pictures had nothing to do any more with the Florentine model. On the obverse, you see the coat of arms of Mainz and on the reverse, the bishop of Mainz in full pontificals with a crosier and mitre from the front, sitting on a throne which is decorated with Gothic pinnacles.

These coins have not been minted in Mainz either but in Bingen, which replaced Eltville as mint of the bishops of Mainz in 1365.

The year 1385 is a very important date regarding numismatics. In this year, the four prince-electors whose territory bordered on the Rhine – Cologne, Mainz, Trier and Palatinate – formed a coinage union. Their union coin was the Rhenish golden. The agreement did not only determine the weight and the fineness of the coin but also what it depicted. On the obverse, you can see John the Baptist. The reverse was dedicated to the coats of arms of the members, while the coat of arms of the minting authority was positioned prominently in the middle.

In total, 25 agreements were concluded between 1385 and 1515, while the members varied from agreement to agreement. Also the motifs were changed from time to time. This later piece depicts Saint Peter who replaced John the Baptist on the obverse. On the reverse, you see again the coats of arms of the participating mints with the coat of arms of Mainz in the middle.

The position of Bishop of Mainz remained a problem. On the one hand, he was a powerful imperial price who held an important office during a sede vacante or the absence of the emperor. On the other hand, he was a crucial delegate of the pope. However, there was an election held by the cathedral chapter which was independent from both authorities. That way, Dietrich von Isenburg was elected bishop in 1495 and he was not willing to pay the pope the obligatory 20.000 gulden for his investiture. Consequently, the pope demanded his dismissal. The inferior Adolph von Nassau should replace him.

The powerful citizens of Mainz opposed the pope’s demand, that was also supported by the emperor. A conflict emerged. In 1462, Adolph von Nassau conquered Mainz. The city was pillaged and threatened to burn. 400 people died. A major part of the residents was expelled and the citizens of Mainz lost their status of a free and imperial city.

Mainz became strictly episcopal and Adolph von Nassau ruled until his dead in 1475.

After that, the cathedral chapter of Mainz elected once again the inferior Dietrich von Isenburg, who obediently paid Rome his fees this time and was approved by Pope Sixtus IV.

In 1515, the cathedral chapter of Mainz elected Albrecht von Brandenburg new Archbishop of Mainz. He was already in office as Archbishop of Magdeburg and as Administrator of Halberstadt. For both positions, he had to pay the Roman pope high fees. In order to receive the pope’s approval regarding the third diocese, he was obliged to pay high fees as well, which forced him to take out a loan. His idea was to finance the credit by selling letters of indulgence. What happened next is basic historical knowledge: Martin Luther resented Dominican Father Johann Etzel, who was selling indulgences for Albrecht von Brandenburg and send his Ninety-five Theses to his employer. That was the beginning of the Protestant Reformation and the definite end of the Middle Ages.