It is an irony of numismatics that collectors always seek what is rare. While the lover of ancient coins would like to have the perfect and most centered strike on their specimens, many collectors of German post-war (machine-made) coins specialize in patterns and mint errors, which are not as perfect as the normal change in our pockets with which we usually pay with. This collector of patterns and mint errors often argues that one can only grasp technical details through these "faulty" pieces that are incomprehensible in the flawless product.

Patterns.
Patterns provide an important insight into the creation of a coin: The quality of a die is assessed by a trial strike. Before the mass production of a certain coin in the 19th and 20th centuries could begin, the responsible officials and politicians were often given samples (so called patterns) to visualize how the final product could look like. Sometimes only these few patterns were made and the actual coin was at the end never realized. This turned these samples into quite the wanted rarities. Just think of the story of the frivolous “Stirnlockenvreneli” from Switzerland. Such samples developed soon into highly sought after collector's items. In the 19th century various German mints were therefore producing these patterns in quite large quantities in order to make a good profit. The production of these patterns went in some cases even further. Collectors, who had enough political influence - just think of the Egyptian King Faruk, had such patterns and off strikes especially made for themselves. Even though advanced computer technology is being used today to minimize possible errors in the dies, patterns still exist in today’s minting process. However, these samples may no longer be sold. If a mint offers "samples”, “patterns” or "essaies", then this is nothing more than a minor edition of slightly deviant pieces which were produced for a sole commercial purpose. Nevertheless a few times in the past one or the other “real” pattern occasionally has left a mint and turned up on the numismatic market. This probably has human reasons...

Following this link you will read more about "The Vreneli" in an article from CoinsWeekly.

Following this link you will read more about the "Verdict in 1933 Double Eagles trial" in an article from CoinsWeekly.

Error Coins.
In contrast to the patterns, a mint error is always unintentional. It is the product of a technical error and was supposed to have been withdrawn from circulation during the stringent controls before packaging and shipping to the Deutsche Bundesbank. Nevertheless, many collectors are happy that it is still possible to discover errors in the circulation money. Some people empty her wallets from time to time, so that they can search for possible rarities.

However, even if one would go through their wallets and purses every day, no one would be able to assemble such an extraordinary ensemble, as it is auctioned under lot number 5566 in the upcoming auction Künker 309 on 19 June 2018. It is one of the most spectacular collections of patterns, samples and mint errors ever offered on the open market. 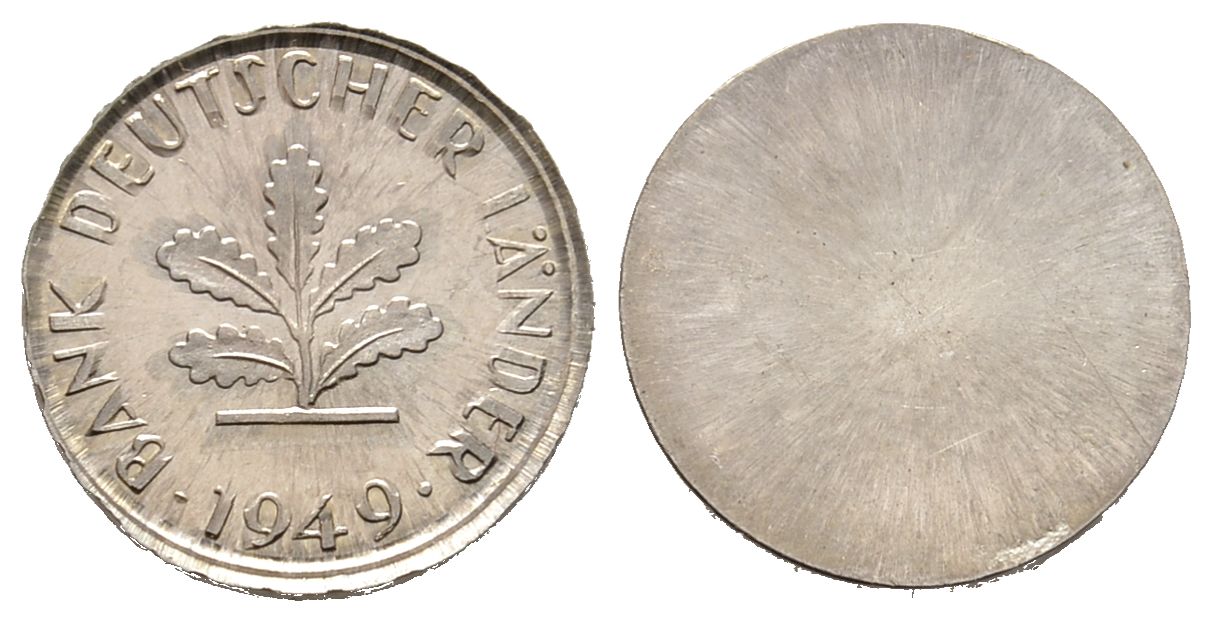 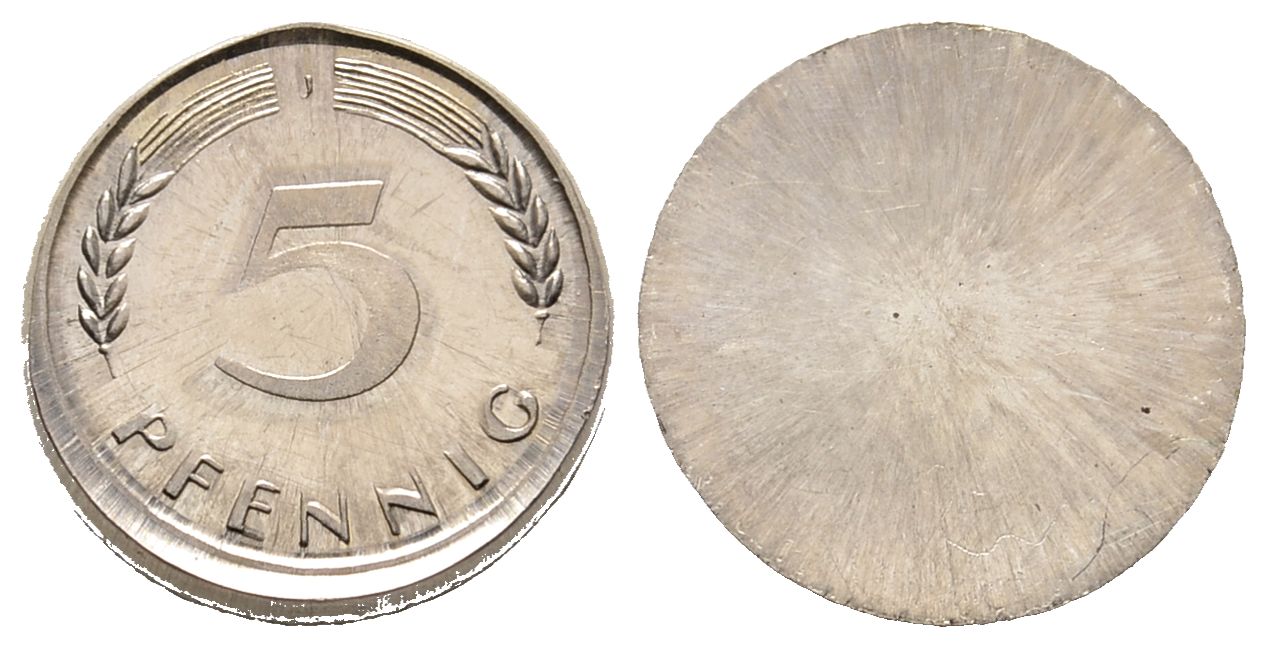 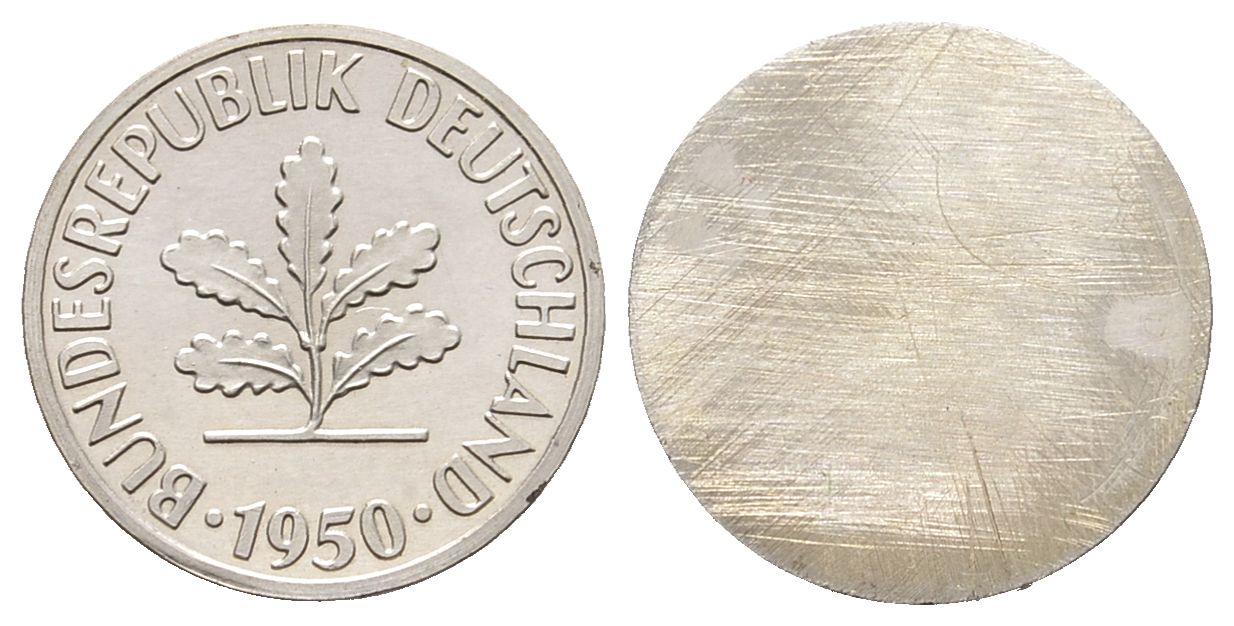 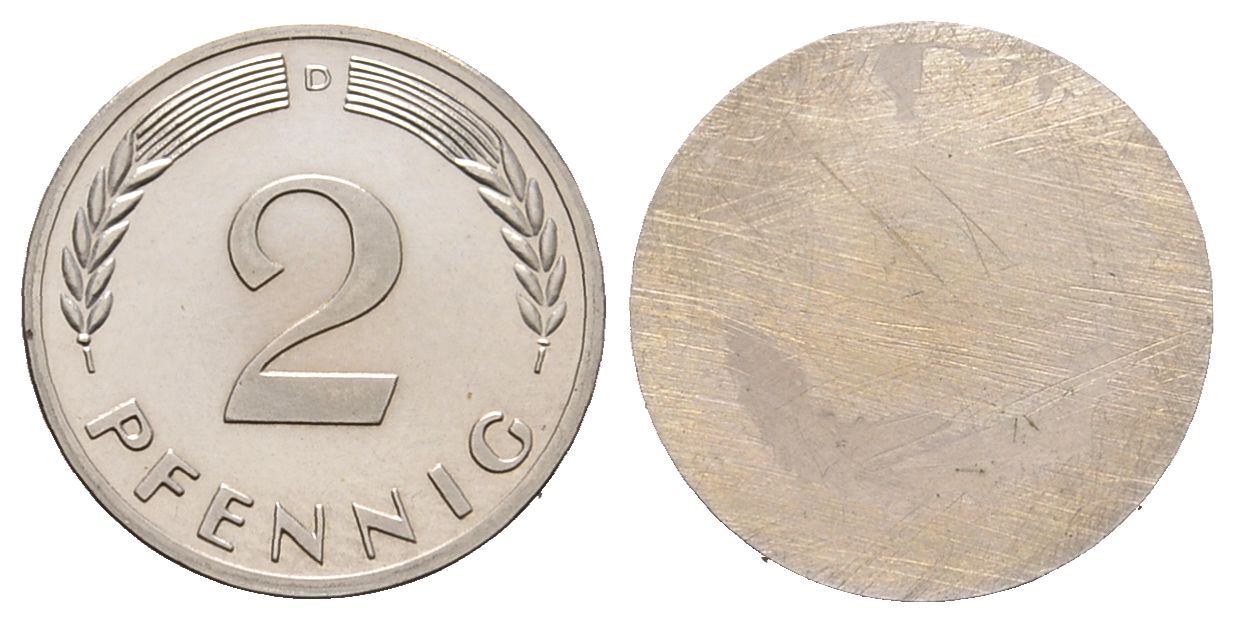 The new coins of the young Federal Republic.

When the Egyptian King Faruk asked for a gold off strike from the first "Pfennig" of the young Federal Republic, this was of course made for him. But this was not the only courtesy striking made by the German mints. Jaeger describes for example in his 25th edition of the Catalogue of German Empire Coinage (2017) rectangular klippe strikings from the 5 Pfennig piece 1949 F in different alloys.

Not yet recorded in Jaegers catalogue is a series of silver, one-sided pattern strikings from the first-generation Pfennig pieces. This collection contains two one-sided silver essais of the 1, 2, 5 and 10 Pfennig pieces, a spectacular reminiscence of the earliest money in the Federal Republic of Germany. 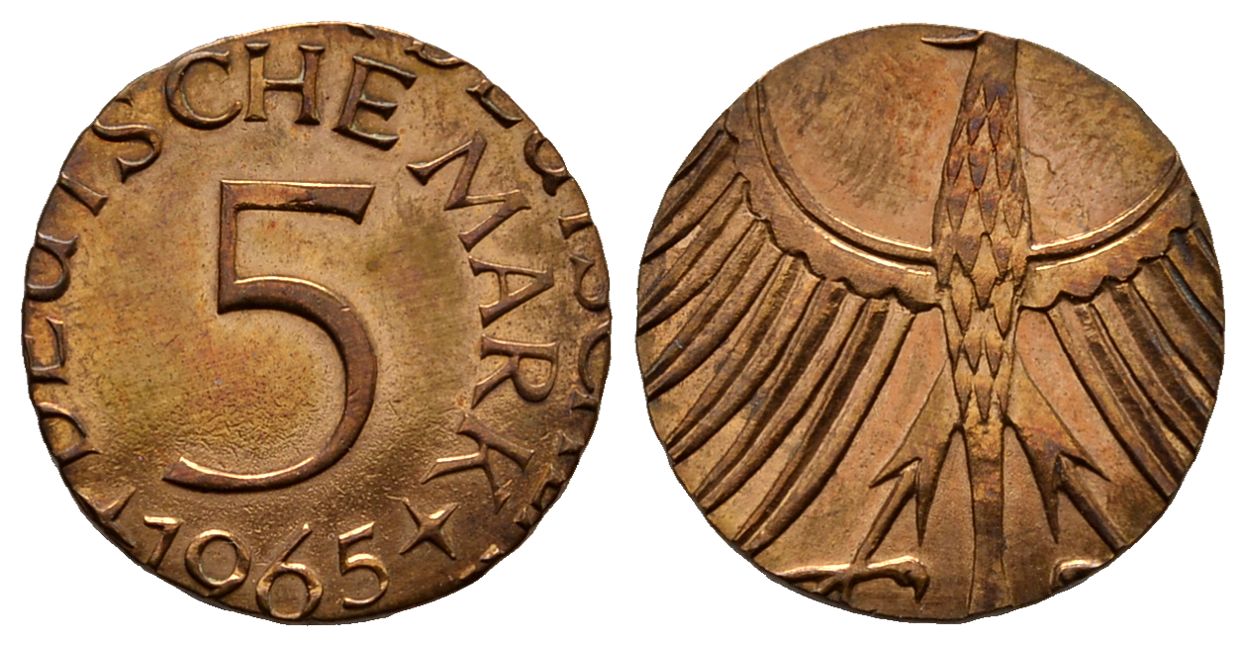 It is relatively easy to understand how this mint error came about: The copper planchet of a 2 Pfennig piece was in the container with the silver planchets for the 5 DM pieces advised. It was like all other planchets  transported between the coin press and then pressed. That she was much smaller than all the others, one sees not only the lack of expression of the motive, but also the complete absence of a propper legend on the coin. That such a coinage exists is already surprising, but that it passed the strict controls, comes close to on a miracle, even if in 1969 when the process of "sorting out" was only done by the human eye.

So far, only a single copy of this mint error is known - in this extensive collection. 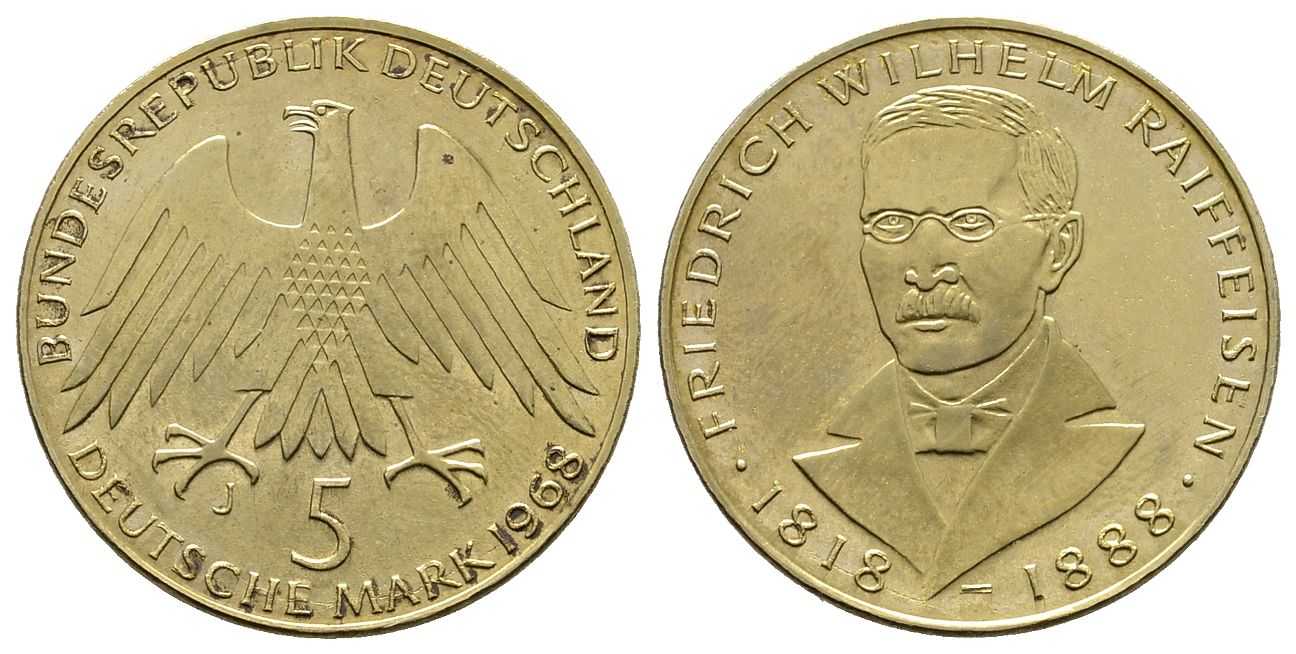 This is most likely a propper test strike to the commemorative coin 1968 "Friedrich Wilhelm Raiffeisen" in brass. These types of test strikings were made to determine the correct ammount of pressure needed from the dies onto the planchet. By means of such deductions it was tested whether the pressure is evenly distributed over the punch or if  there are certain, particularly stressed areas with too much pressure which would lead to possible die cracks. 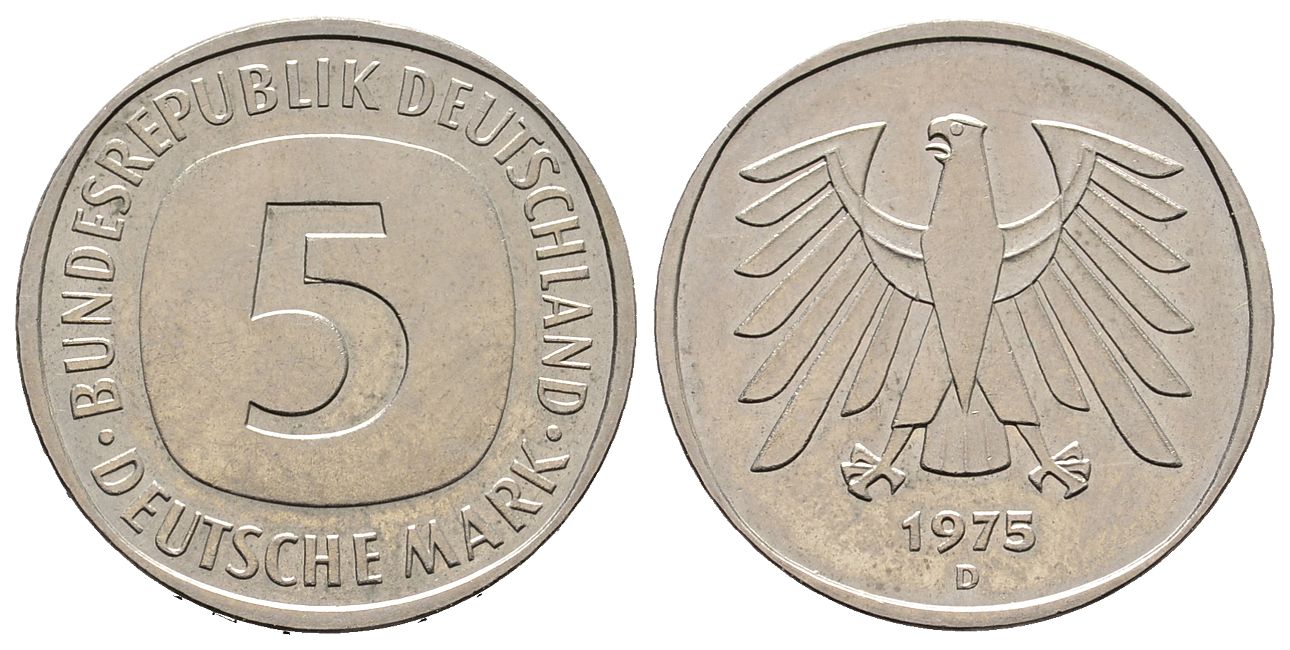 Due to exactly these technical reasons, with the die cracking due to too much pressure it was not possible to issue the new 5 DM coin, which first appeared in 1975, as the artist originally designed it. The greatly inflated, irregularly thick edge could not be produced in the mass stamping. It would have meant a too strong wear on the dies. Therefore, the edge bar became lower and more uniform in the following business strike.
There are samples showing the actually planned "high" rim, namely 5 DM 1975 D, G, F and J. Three of them, namely D, G and F, are included in the collection offered by Künker. 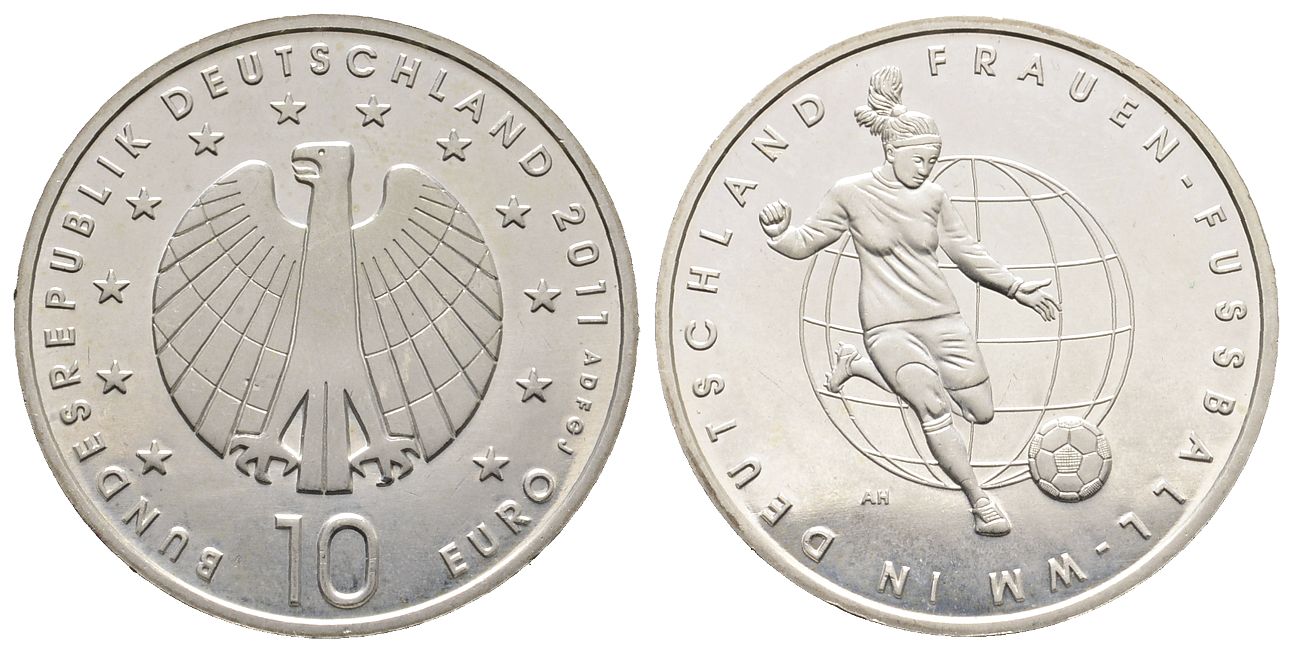 Only a few patterns have left the mints since the changeover to the Euro. One of them is the coin that was issued in 2011 for the Women's World Cup. On them the word women's football is written with a dash: WOMEN'S - FOOTBALL. Although these coins are made of silver, they do not carry the usual countermark with the fineness, so we know that they were struck with the dies originally intended for the circulation commemorative coins. Only in the light of the samples was it decided to remove the visually unpleasing hyphen in the legend.

So it's worth taking a closer look at the lot number Künker 5566. The lot has museum qualities. In other words, every museum would be proud to have such a collection of samples and stamps, let alone a private collector. The estimate was set for the approximately 330 pieces at 10,000 euros. That this lot will not be available for that price once the hammer falls, everyone should be clear after this article.

Here you come directly to the lot number and its description.