On Friday, March 13, 2015, Künker auctions off a Siculo-Punic coin with an enigmatic depiction: on the obverse we see a beautiful woman with a Phrygian cap. Is it Dido? Is it Tanit? Or is it perhaps a completely different goddess?

“The interpretation of the types used for series 4 has been varied, and it cannot be said that any really positive and satisfying result has so far been reached”, wrote G. Kenneth Jenkins in the Schweizer Numismatische Rundschau from 1977 where he marveled at the small series of Carthaginian tetradrachms bearing the enchanting portrait. Back then, he dealt with the question whether or not this female head represents Dido. After all, it was customary in the Greek world to depict city founders on coins. As other possible identifications he considered Astarte, Tanit or the Goddess of Eryx which the Greeks used to refer to as Aphrodite. Others thought that the lion on the reverse pointed at the personification of Libya and addressed the coinage as a denomination intended to pay Libyan soldiers. 10 years later, in the Schweizer Numismatische Rundschau from 1987, Linda-Marie Hans, who had dealt with the Carthaginian epicraty on Sicily in her PhD thesis published in 1983, set out to solve the problem for good…

According to ancient authors Alexander the Great planned just before he died in 323 to continue his voyage of conquest in the West. If this was really the case, nobody knows for sure. The historiographers at any rate thought it possible, as did the contemporary Carthaginian politicians who were fascinated by Alexander’s successes. The organization of the Empire of Alexander was well-known to the Carthaginians. At the top was the ruler who had assumed the title of the Great King and who loved to wear the Persian ceremonial dress with the upright tiara. The different provinces were administrated by satraps who, as a sign of their power, wore a cap that harked back to the Persian royal head gear, a tiara with a soft top and adorning fillets – just like the one that graces the head of the lady on our tetradrachm.

This, in combination with the minting date of the coin type, i.e. something between 320 and 310 as indicated by coin hoards, made Linda-Marie Hans link the coins with the Carthaginian strategist Hamilcar who was the supreme commander of the epicraty of Sicily at that time. Hamilcar? Doesn’t this name sound familiar? Yes, it does, but he was certainly not THE Hamilcar surnamed Barcas, the father of Hannibal. The name Hamilcar was really popular in the Carthaginian upper classes back then, that’s all.
This strategist seems to have been a very determined man who preferred acting quickly to asking for orders in Carthage. He intervened in the Syracusan civil war in 318. He sent his diplomats to Messana and prevented the exiled Syracusans from being extradited. He negotiated a treaty between Acragas, Gela, Messana and Agathocles who had become tyrant in Syracuse. Yet just one year after his success, the Carthaginians stripped Hamilcar of his office. We learn from the ancient authors that Carthage doubted his loyalty.

The coin type with the lady wearing the tiara might well give us an idea about Hamilcar’s real plans. Linda-Marie Hans points to the fact that, strictly speaking, all ladies on the Siculo-Punic coins represent the goddess that was venerated in the main Carthaginian sanctuary on Sicily, located on the Eryx hill. It was Ishtar-Astarte, worshipped by the Greeks as Aphrodite Urania. Pausanias, mentioning the Assyrians as the first believers of Aphrodite Urania, was still aware of the Mesopotamian origin of this deity. This Ishtar was a powerful entity, goddess of both war and sexual desire. She was accompanied by the lion which would perfectly match the depiction on this tetradrachm’s reverse.
Hamilcar, making the Greek die cutters add the insignia of a Persian satrapy to the goddess, claimed the same legal status for his epicraty on Sicily as that of a Persian province, hence a limited autonomy. It is easy to imagine the council in Carthage begging to differ and consequently deposing Hamilcar from office.

By the way, the Romans knew how to capitalize the importance of the cult of Eryx to the people of Sicily. After Sicily had been conquered in the First Punic War, the newly appointed provincial administration had to adjust the cult of the goddess to make sure that the Romans and their allies could gain control over it. An army of 200 men safeguarded the sanctuary, and the cities that were loyal to Rome were granted the special privilege to celebrate the festivals of the goddess. With that, the Romans had obliged the goddess and so taken her protection away from the Carthaginians and transferred it onto Rome. When the Romans faced imminent annihilation by the Carthaginians later, in the Second Punic War, after the Battle of the Lake Trasimene, they made a vow to build the Venus of Eryx a temple in Rome. Thus, the goddess that had protected the Carthaginian epicraty once had become a helper of Rome.

Agathocles used to be the great opponent of Hamilcar for whom the Carthaginian strategist negotiated a treaty with Acragas, Gela and Messana. This coin was minted after Agathocles, after a long war with Carthage, had finally made peace with Hamilcar’s successor. 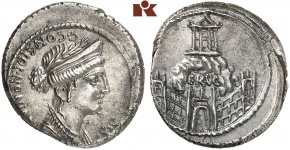 In the city of Rome, the Romans built Venus Erycina, as they called her, a temple which this coin depicts.

The sanctuary of Aphrodite of Eryx in Sicily,enlarged in medieval times to become a fortress. Photo: KW.