Why the Middle Ages Were so Warlike

He was a hero of the kind depicted in medieval picture books – William, Duke of Guelders, Count of Zutphen and, after the death of his father in 1393, Duke of Jülich ruled over a large and profitable territory on the Lower Rhine. And he was young. When he became Duke of Guelders in 1377, he was only 13 years old. That wasn’t unusual. At the age of 13, a “man” came of age in medieval times. From then on, he wasn’t only entitled to rule but also to take a wife. William waited two more years before doing so: In 1379, he married Katherine of Bavaria, who was three years older than him and equipped with a rich dowry. 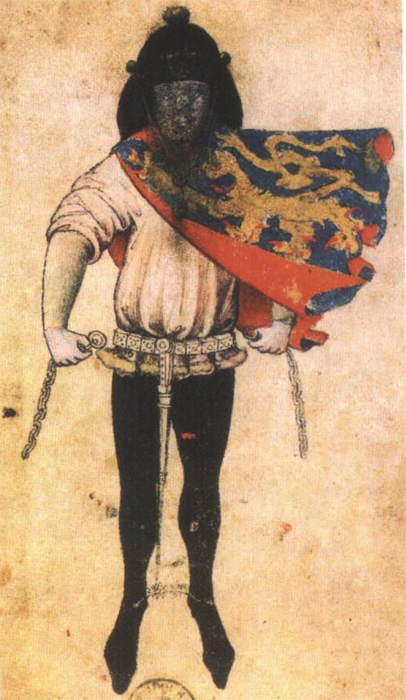 A herald shows the coat of arms of the Duke of Guelders in the context of a tournament. From an armorial of the Bibliothèque Royale de Belgique, Brussels.

Who was this William? Well, when he ascended the throne, he was the exact opposite of what we expect a good ruler to be like today. But what can you expect from a 13-year-old going through puberty? William was short-tempered, downright addicted to glory and war. His interest in money was limited to the fact that he spent a lot of it. William went from tournament to tournament unless he was on one of his three crusades against the heathens in East Prussia or chased pirates in the Mediterranean. William was that much of a daredevil that even admirers of chivalry like Jean Froissart criticised his foolhardiness (however, just a little). 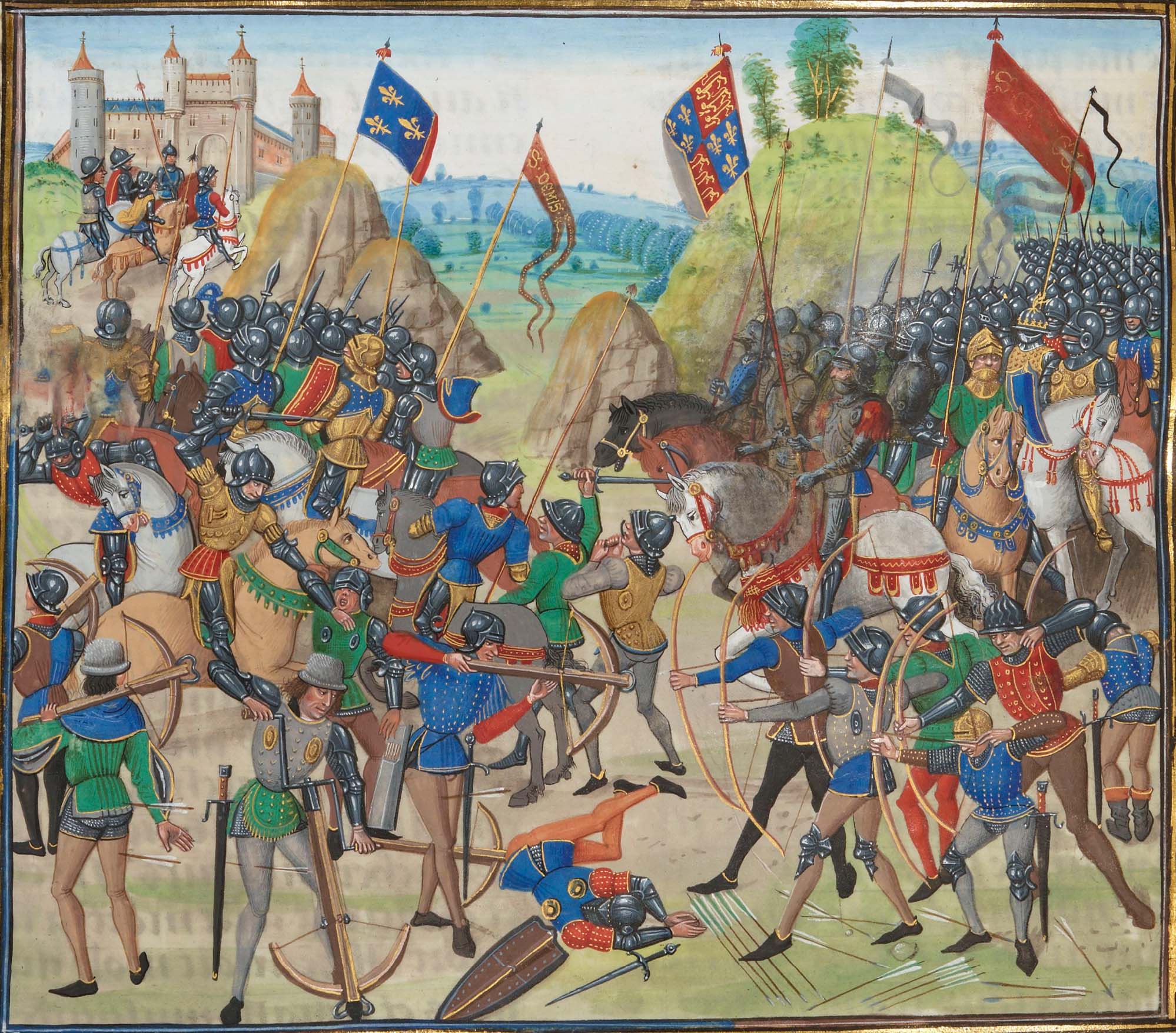 The French army of knights is being defeated by English archers in the Battle of Crécy. Illustration from the 15th century. Illustration taken from the Chronicle of Jean Froissart, Bibliothèque nationale de France.

The downside of the glory was the high level of costs associated with knightly warfare. Already around the turn of the millennium it was assumed that 1.5 square kilometres of fertile land were needed in order to provide a living for a single knight with his horse, armour and squire. Back then, an armour cost about as much as five oxen. And since then, prices hadn’t decreased.

Quite the opposite. We know how much Edward III of England paid his allies in the 14th century so that they supported him in his war against France. Emperor Louis IV of Bavaria – to only name one example – received 300,000 florins for lending Edward about 2,000 knights for 2 months.

You can probably imagine how much money William spent as a teen on his expensive and dangerous hobbies. He was quite fortunate because, back then, Guelders was one of the richest territories of the entire Holy Roman Empire. The centre of the cloth industry was located there, it was the region where English wool was processed into finely woven cloth, and these fabrics were extremely popular in Italy.

That’s why, every time William was in need of money, he asked the estates for it – for example the representatives of important trading cities like Nijmegen, Arnhem or Zutphen. And they were more than willing to give William the money he needed since every time they did so, they were granted extremely profitable rights and privileges.

It took young William many years to realise that his complaining advisers weren’t wrong when they urged him not to spend more money than he made since every tax source that had been pledged no longer provided income. The debts had to be repaid first, and that required a lot of time and effort. 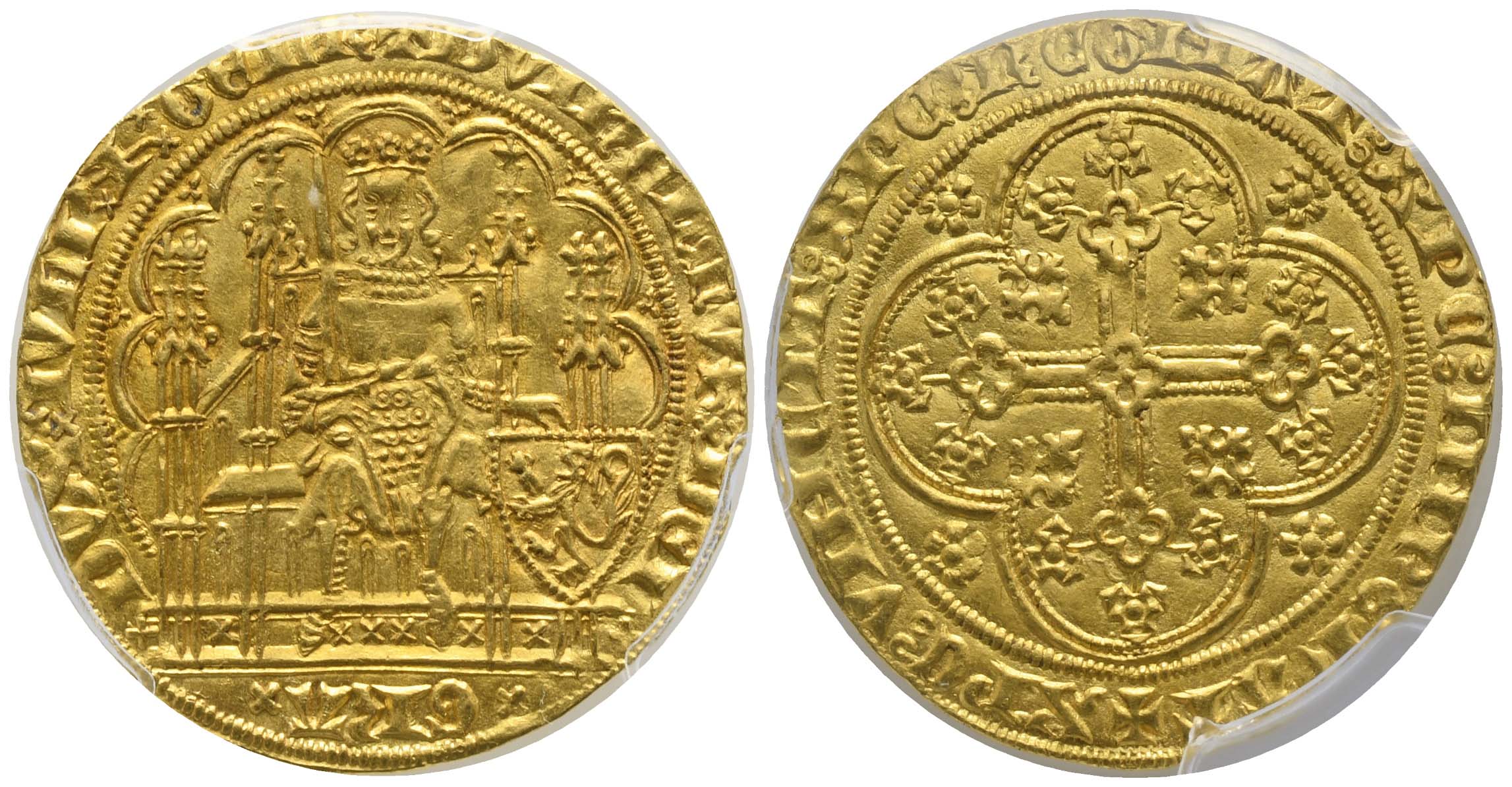 William probably understood this when, after the death of his father, he took over the reign in Jülich at the age of 29. Alfred Noss, the great numismatist of the lower Rhine region, assumed that the extremely rare coin type offered at Künker’s Berlin Auction Sale 2020 was minted in order to repay a debt taken on in écu, an old currency, and not in florins as it was customary at the time.

The écu d’or à la chaise struck between 1393 and 1402 portrays William as a wise ruler, sitting on the throne, holding a sword in his hand as a symbol of his power over life and death, the shield with the coat of arms of Jülich in the left hand. We are familiar with this depiction from the “small chaise”, a significantly more frequent coin type that combines this obverse with the design of the Rhenish gold guilder on the reverse. The weight of William’s coin recalls the big écu d’or à la chaise, which had been minted for the first time on behalf of Philip IV of France in 1303. Even though the weight of these coins was reduced to 4.7 g in 1337, they had become relics of the past long before William’s coin was struck.

This fact led Alfred Noss to the conclusion that the piece was meant to be used for repaying a debt – considering William’s lifestyle this thesis is quite plausible.

Our young hothead had matured. He became a capable sovereign, who made use of strong alliances instead of armed conflicts in order to achieve his goals. He concluded agreements with Kleve, Cologne, Aachen and Brabant and became a convinced supporter of emperor Wenceslaus of Luxembourg. He helped the latter to keep the crown – at least for a short amount of time – by barring the way to the coronation site of Aachen to the rival candidate from the House of Wittelsbach, Rupert of the Palatinate.

However, William had backed the wrong horse. Wenceslaus became so unpopular in Bohemia that his own brother took him prisoner in Prague in the March of 1402. William didn’t live to see that. He got sick and died within two months at the age of only 38. By the way, that wasn’t unusual in medieval times.

So, if should ever be surprised about a decision made by a ruler of these eventful times, you might want to check first how old he was when making that decision. One can only understand the Middle Ages if one takes into account how young and inexperienced most of the rules were.