On 5 and 6 February 2020, several special collections will be on sale in the virtual auction room as of 6 pm. First, another part – almost 700 lots – of the Friedrich Popken Collection of coins and medals from the area of Lower Saxony will be auctioned off. A taler treasure from the Franconian city of Betzenstein comes next. Obviously, the find was officially reported to the competent authorities, which approved the sale. Then, about 50 Habsburg coins and medals will be auctioned off. This auction is rounded off by modern medals, a major part of the offer consists of a comprehensive collection of Goetz medals.

Coins and Medals from the Friedrich Popken Collection

The eLive Premium Auction starts with about 700 lots of coins, medals and tokens from the area of Lower Saxony on Wednesday, 5 February 2020 at 6 pm. This time, the sale will not focus on the expensive rarities from the Friedrich Popken Collection. As every good collection of regional means of payment, this collection contained pieces struck on behalf of the local governments, too. That’s why everybody will have the possibility to acquire a piece from the Popken Collection for his or her own collection at this auction – after all, the estimates start at 20 euros.

However, that doesn’t mean that the lots are be less interesting – quite the opposite. At this point, we would like to give an impressive example: Friedrich Popken owned a rich collection of tokens from the city of Hildesheim. Among them is, for example, a series of six gate tokens made in 1609. These gate tokens provide us with insight into the daily life of the time before the Thirty Years’ War.

Many cities used tokens to organise the payment of taxes and levies: Those who entered the city with vehicles or pack animals received such tokens when passing the city gate to prove that they had paid the fees for each animal. On the reverse, these tokens featured different numbers that referred to the number of animals. When the small caravan left the city, the watchman at the gate could check thanks to these tokens whether all fees had been paid and whether a merchant had sold one of his animals while he stayed in the city. 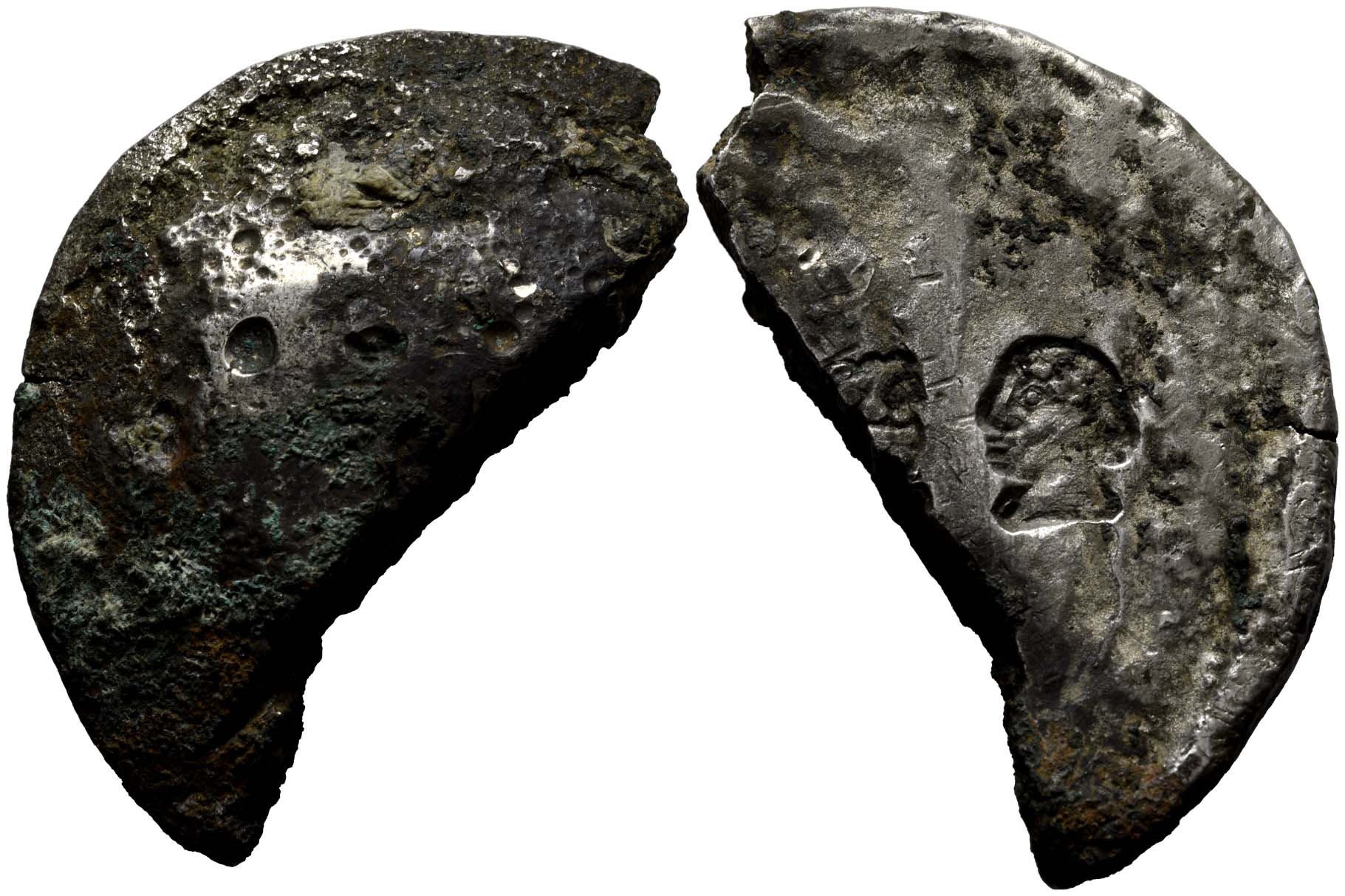 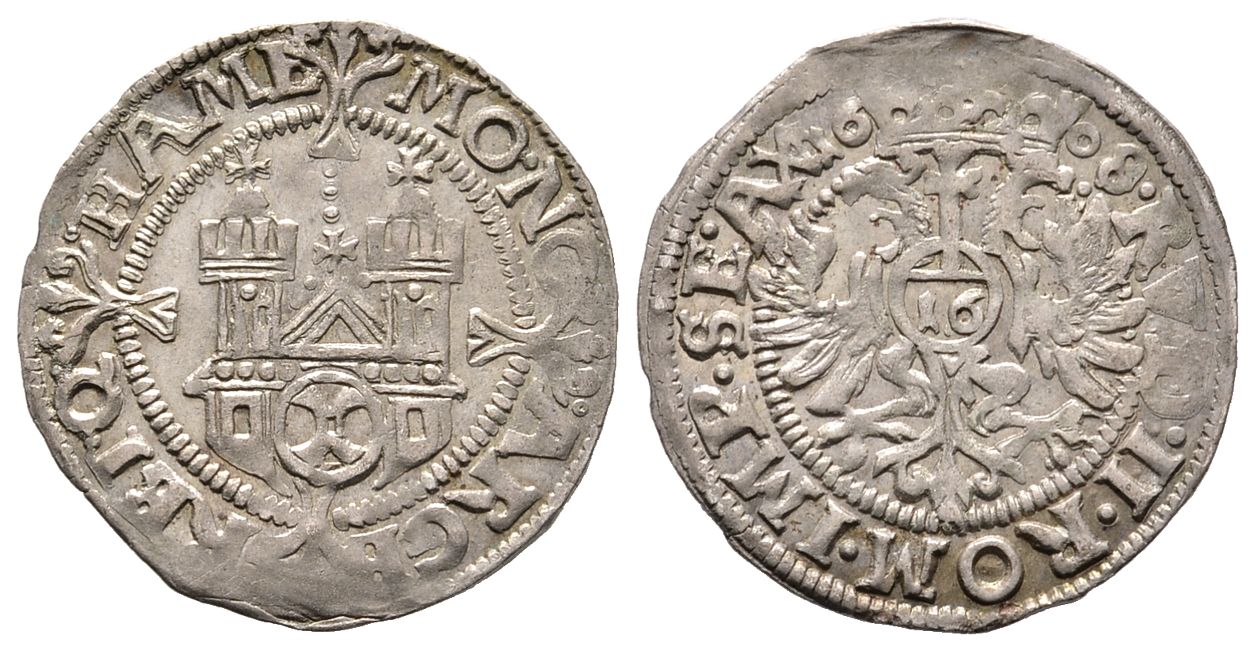 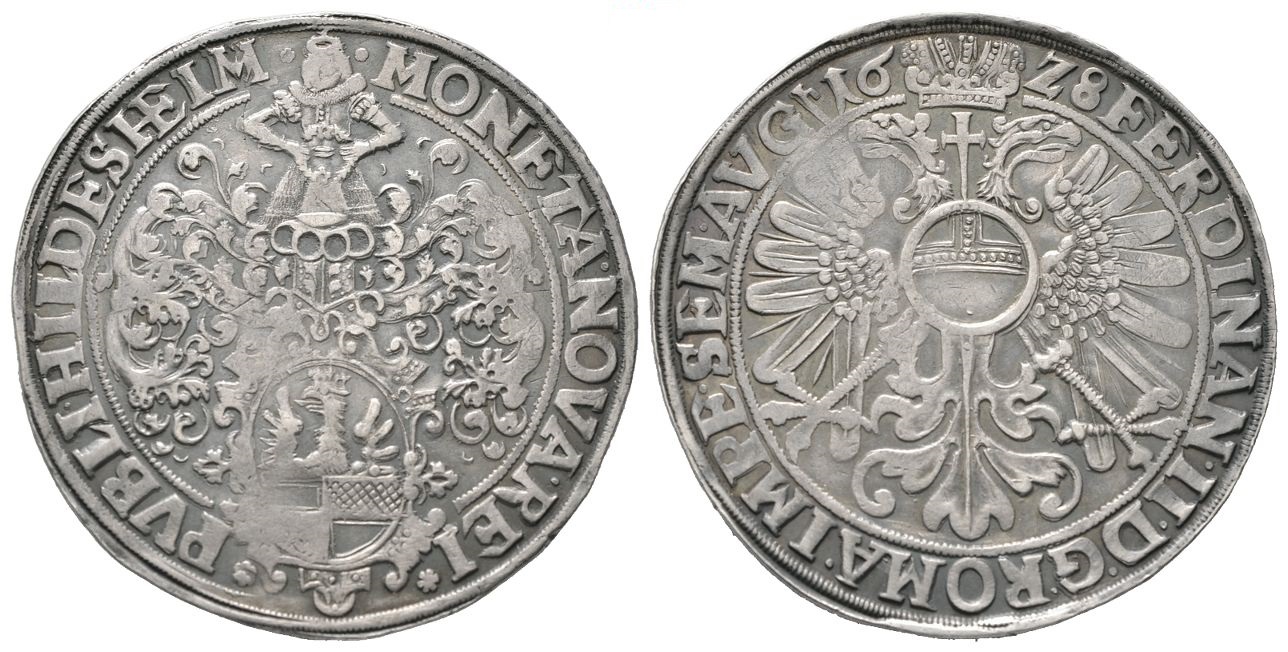 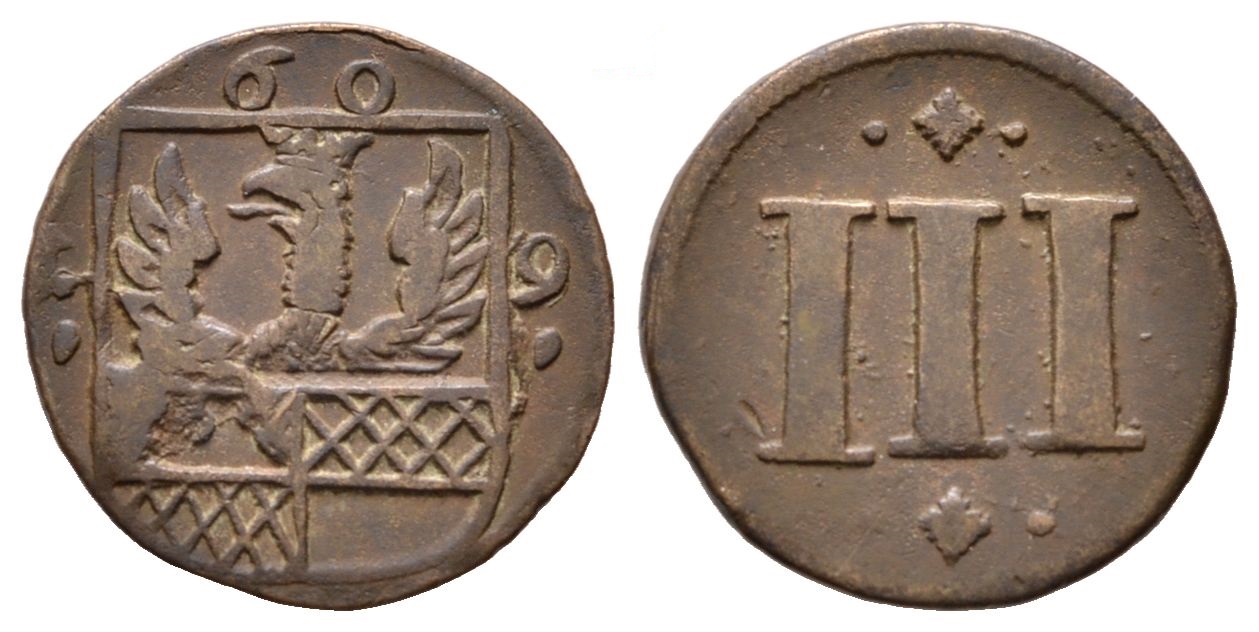 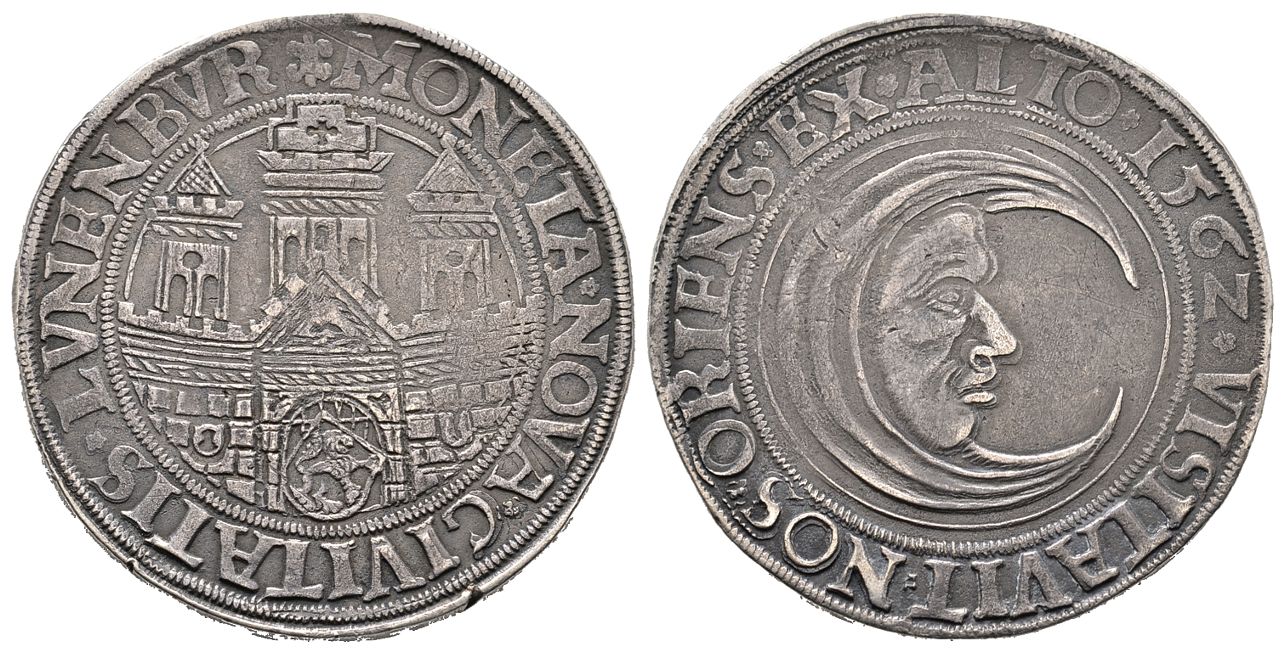 At some point after 1626, an unknown person buried 123 talers and a half taler near the city of Betzenstein, which was then under the rule of Nuremberg. Was it a merchant passing by? After all, Betzenstein was located at several important trade routes, like the one that led to Bohemia. Of course, it is also possible that it was a citizen trying to hide his savings.

The treasure was probably buried in a bag made of leather or cloth. Some of the talers were made in remote regions like the Netherlands or Tuscany. However, most pieces are from the immediate surroundings: For example, the imperial city of Nuremberg is the issuer of about 50 pieces – almost 40% of the treasure. The fact that there is a span of 65 years between the minting of the oldest and the youngest piece tells us about how long coins were in circulation at that time.

Moreover, the youngest pieces provide us with the decisive indication as to the year in which the treasure was buried. No piece was minted after 1626. 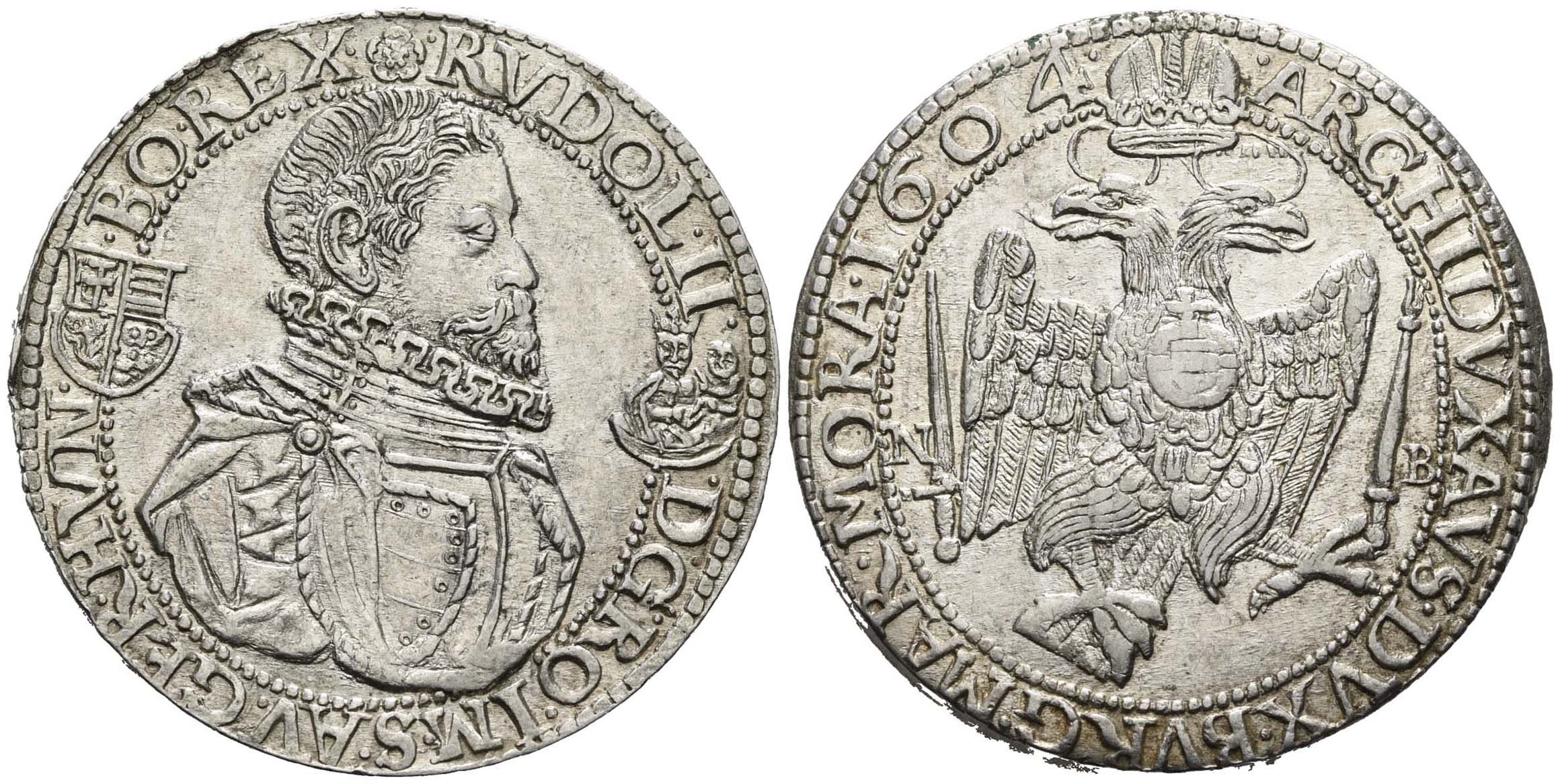 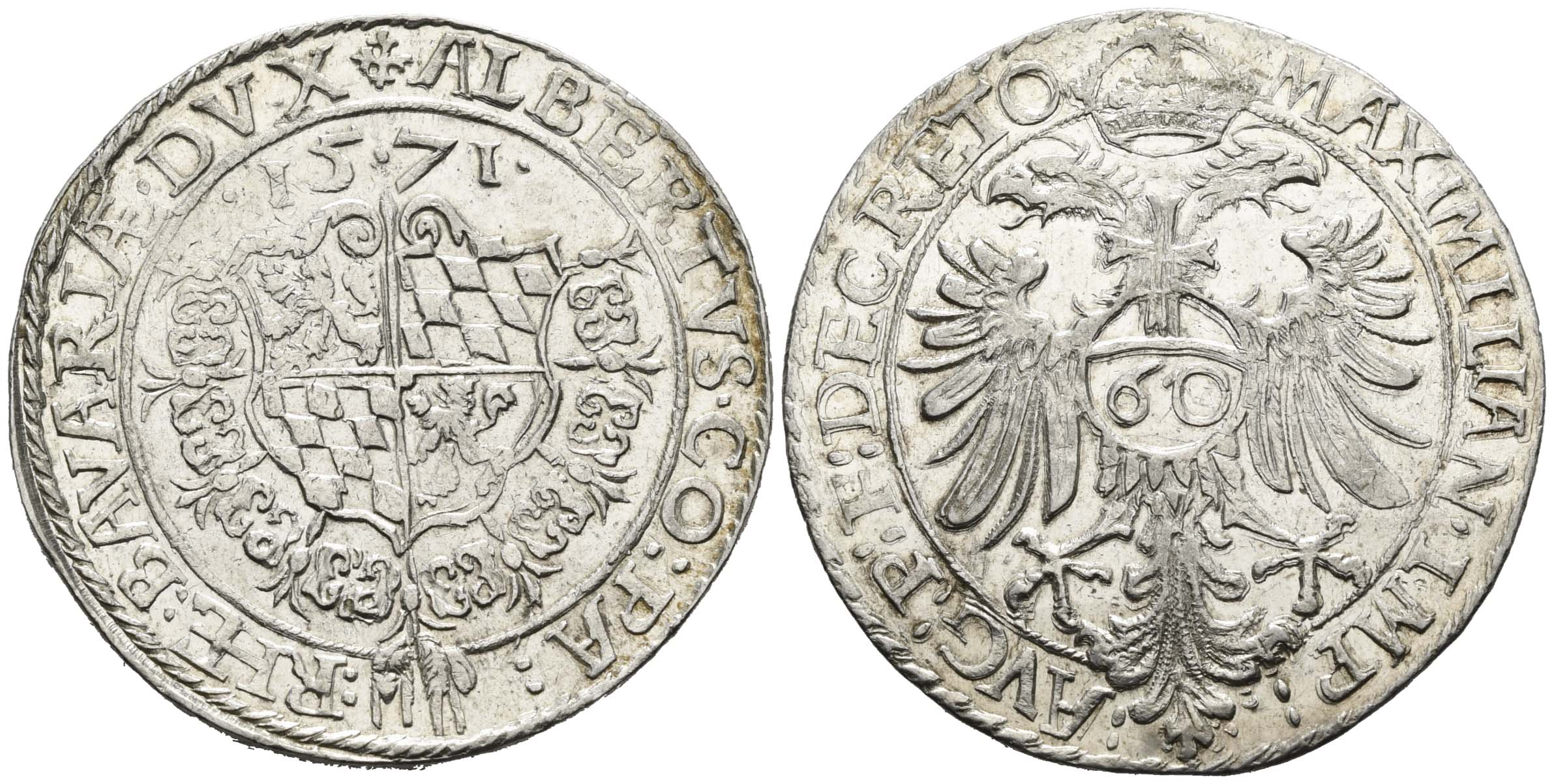 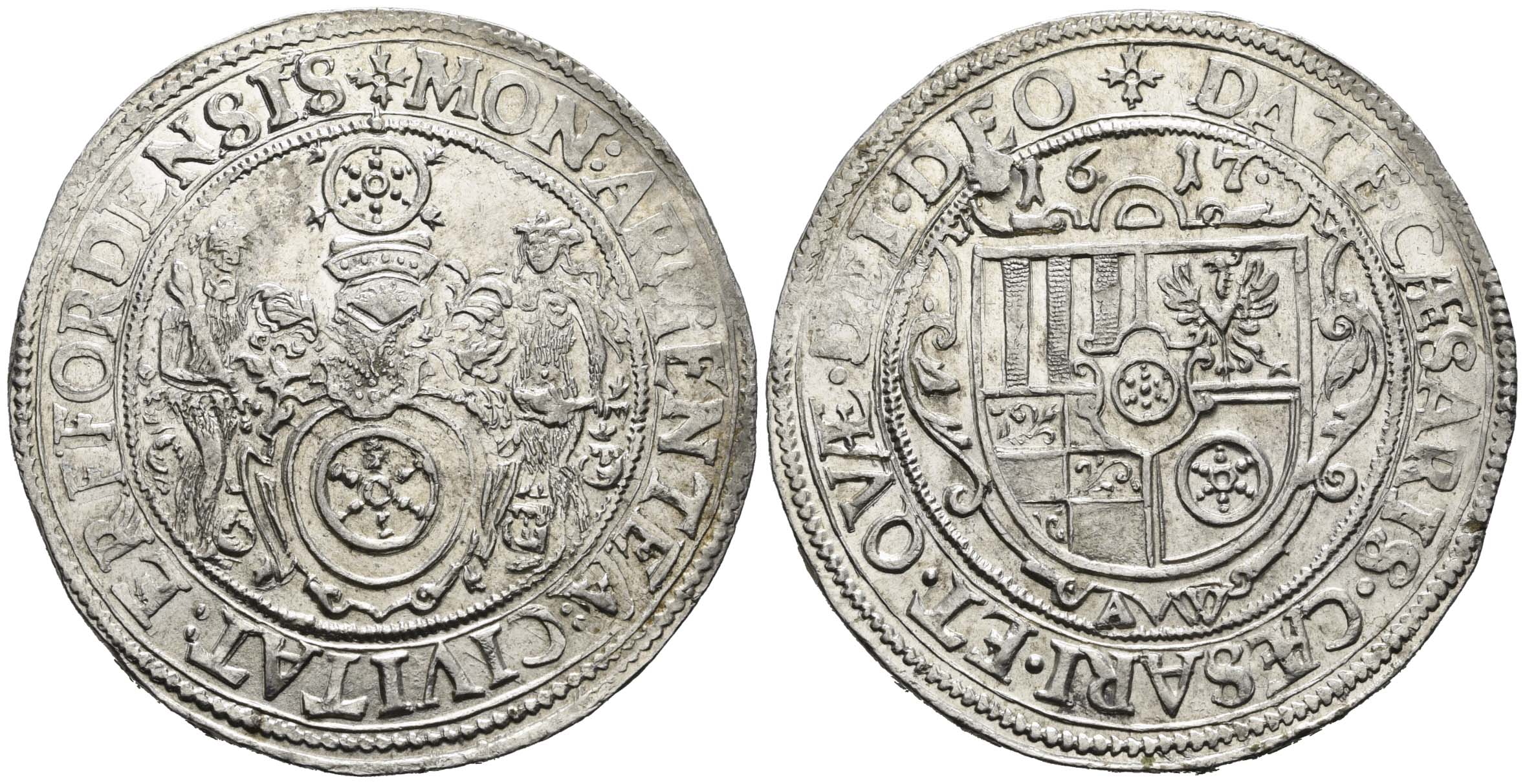 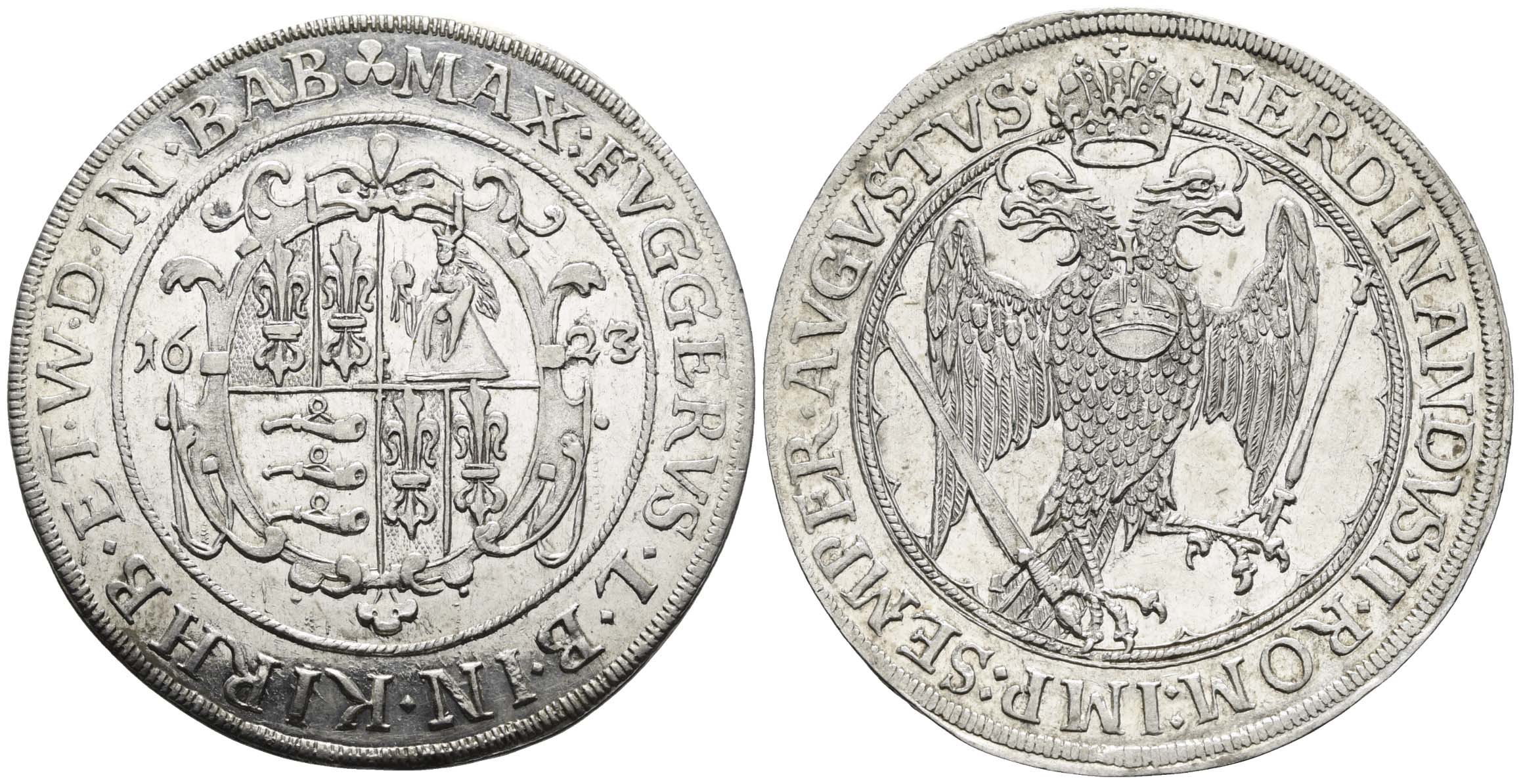 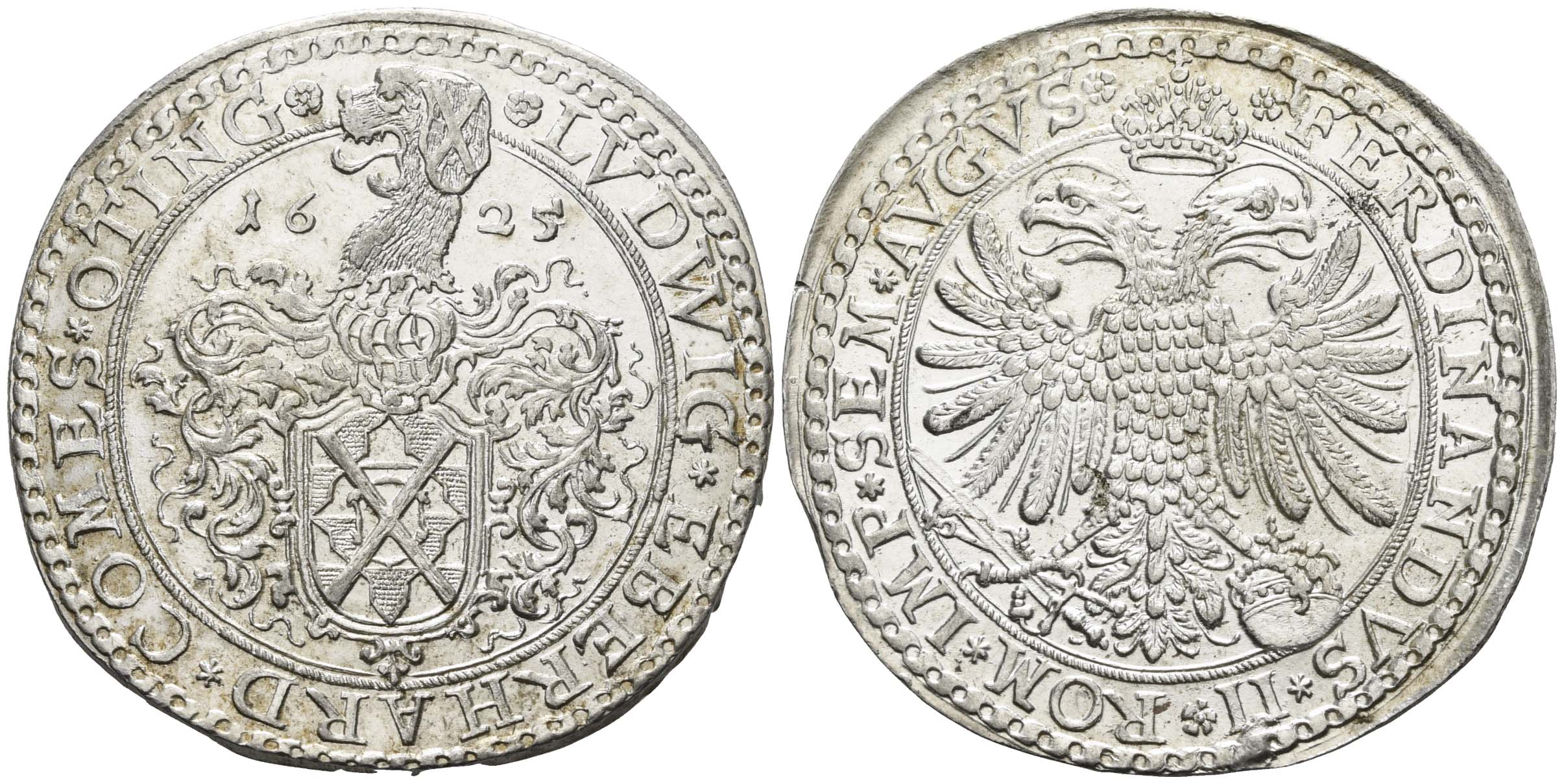 Coins of the Holy Roman Empire

If you are looking for coins of the Holy Roman Empire in excellent conditions at reasonable prices, you will find a lot of material in the “Special collection from the House of Habsburg”. The pieces originate from the time between Rudolf II and Leopold II. The specimens stem mainly from the mints of Hall, Vienna and Kremnica, but also from the mints of Antwerp, Günzburg, Karlsburg, Kutná Hora, Milan, Baia Mare and Prague. 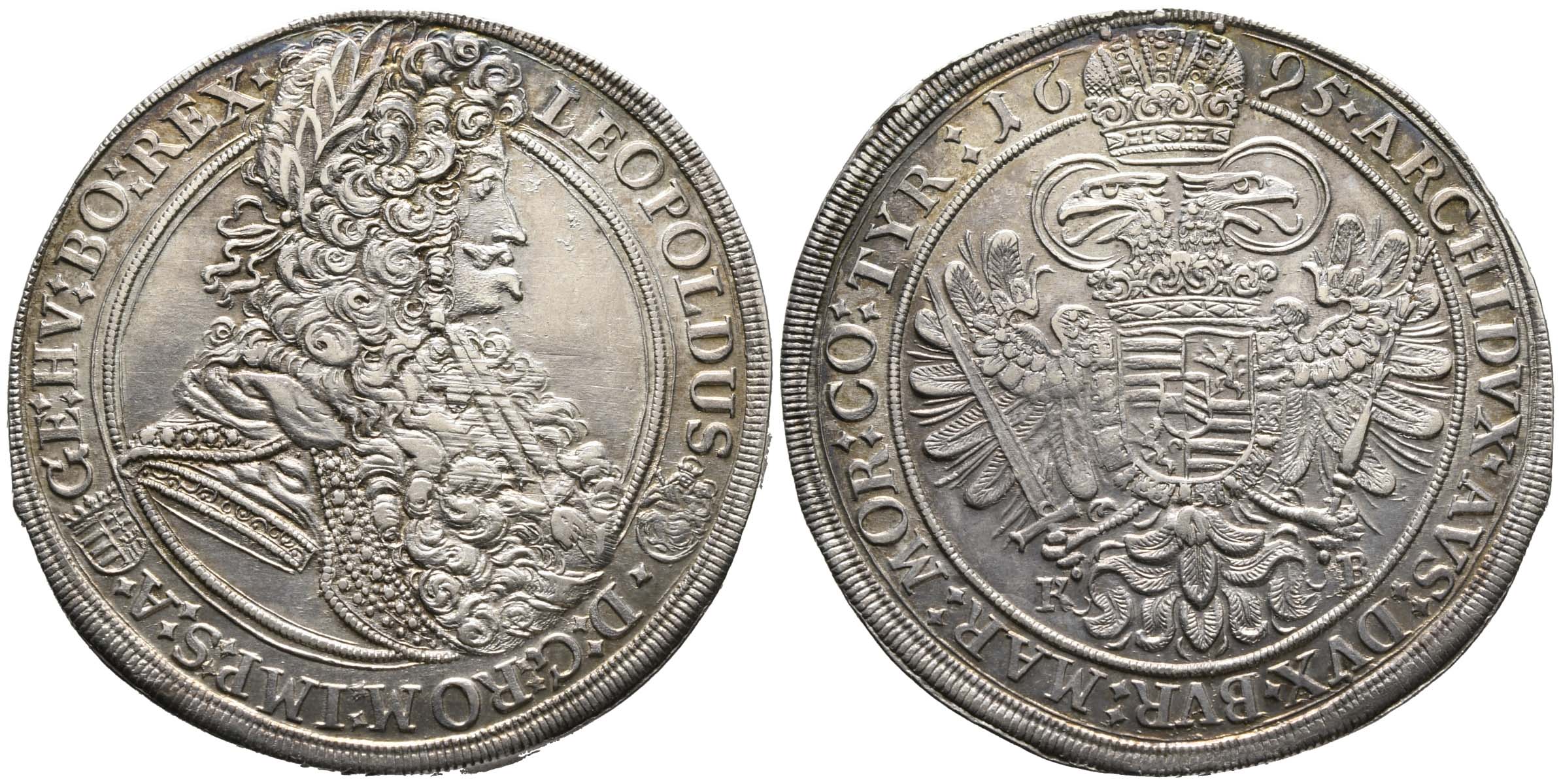 Medals from all over the World

Medals are an insider tip among collectors. The production of medals is way more elaborate, however, their prices are significantly less expensive than coins of the same rarity. Therefore, a glance at the catalogue is worth it, even though the above statement only applies to some of the pieces.

Over the last years, Goetz medals have developed into a popular collecting area. The eLive Premium Auction 332 features an extensive selection of these medals and focuses on the satirical medals of Karl Xaver Goetz (1875–1950). His form of propaganda can hardly be understood by today’s observers; nevertheless, these medals are distinguished testimonies to the tense atmosphere in Germany in the time from the beginning of World War I to the end of World War II. After all, Goetz was first and foremost a businessman who produced whatever his clients were willing to buy. At the same time, he was an amazing artist as you can see by looking at the early portraits, for example the one made in 1905 commemorating the golden jubilee of the first Mass of the archbishop of München-Freising. 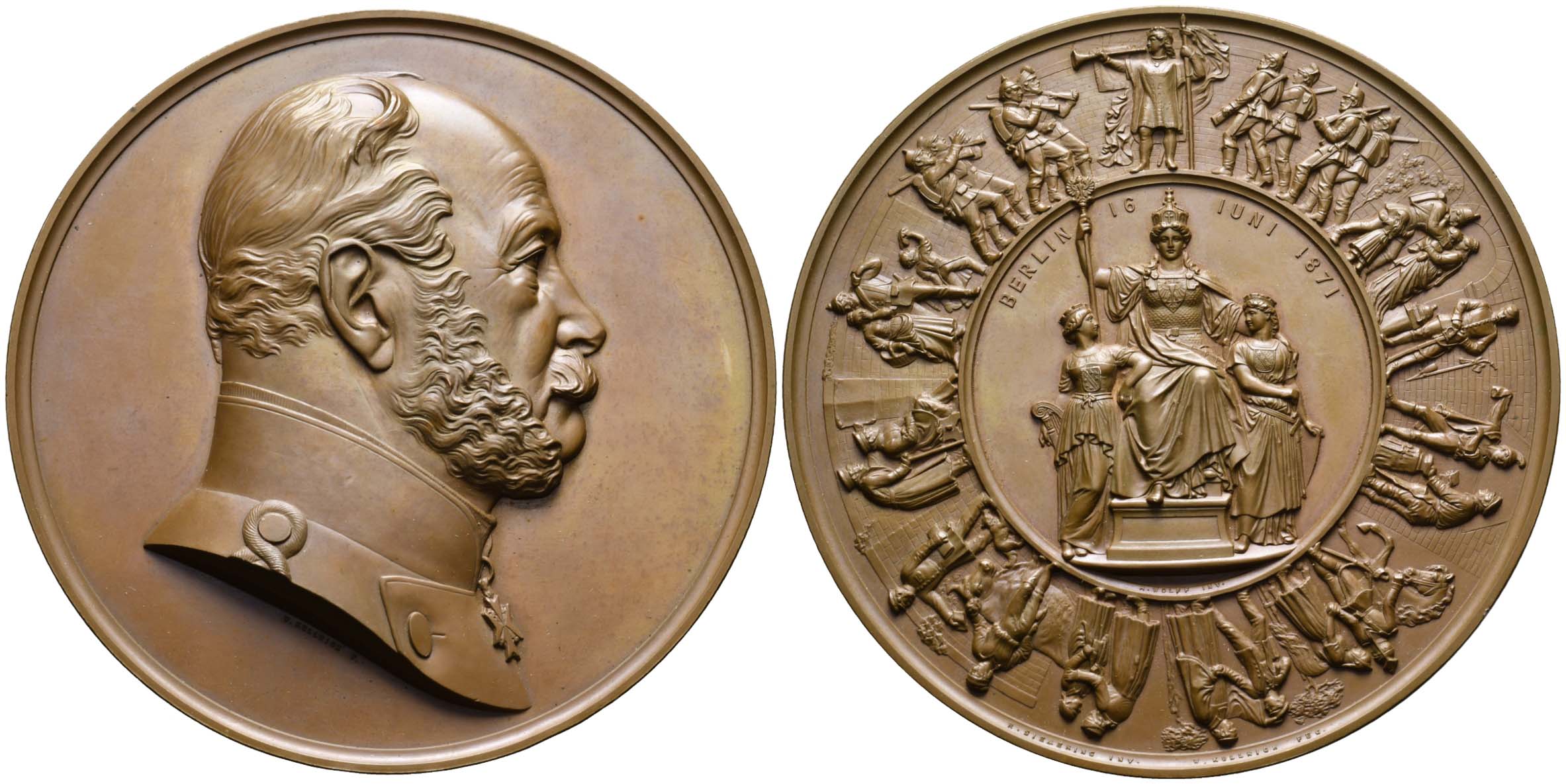 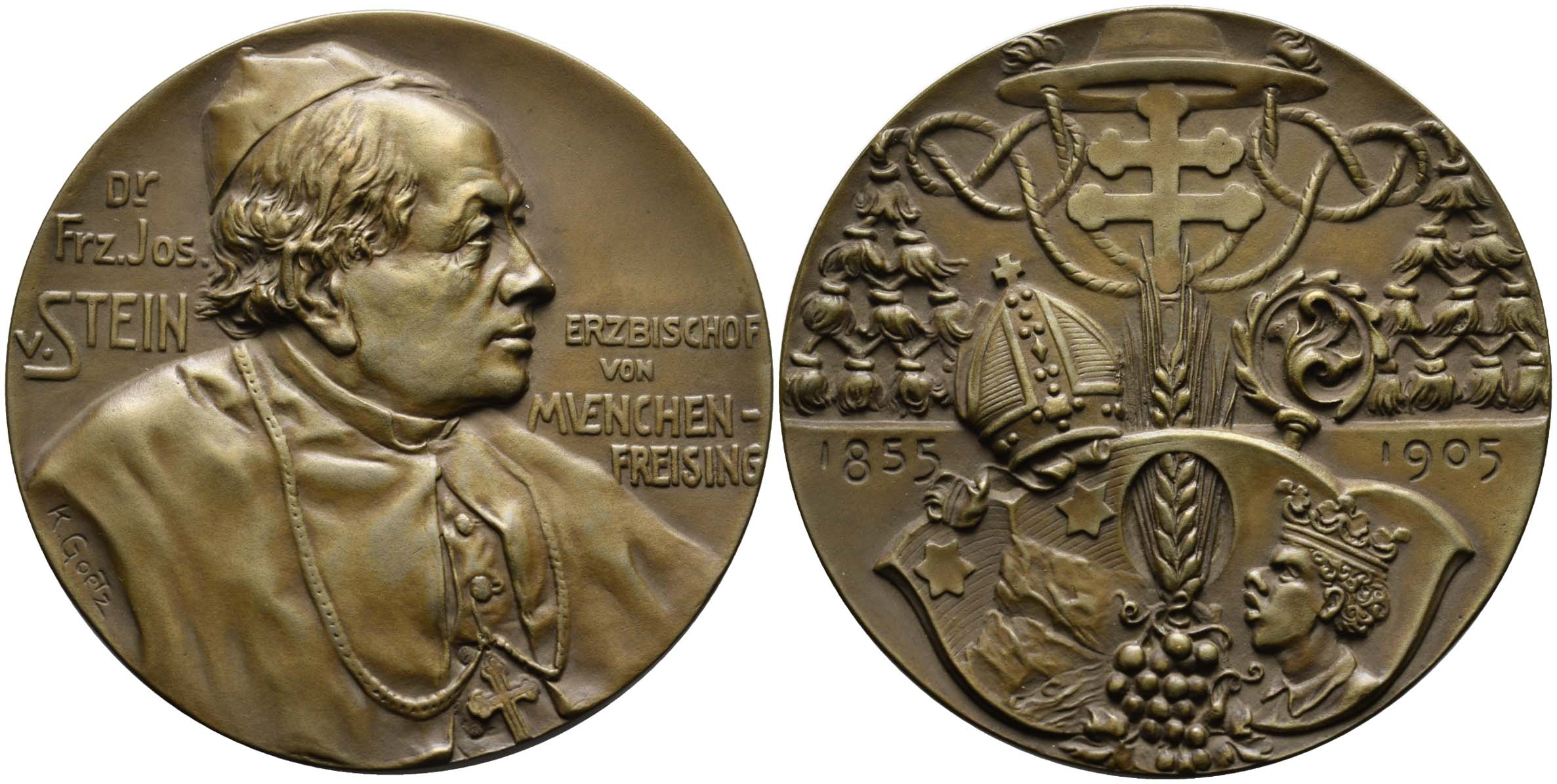 The viewing will take place from 2 to 25 January 2020 – only by prior appointment – in Osnabrück.

Additionally, the coins can be viewed at Estrel Hotel, Berlin on the following days: