The French Second Republic and a Coin Contest

By the end of the February of 1848, the working class and the poor citizens of France had had their fill of so-called Citizen King Louis Philippe. In their opinion, he was a ruler of the rich and denied poorer French citizens political participation by means of the electoral law. When his authorities prohibited a propaganda event in favour of universal suffrage, uprisings began in Paris.
They were successful. On 26 February 1848, the liberal Opposition proclaimed the Second Republic. Until then, the man who was elected president had distinguished himself rather as Romantic poet than as politician: Alphonse de Lamartin. 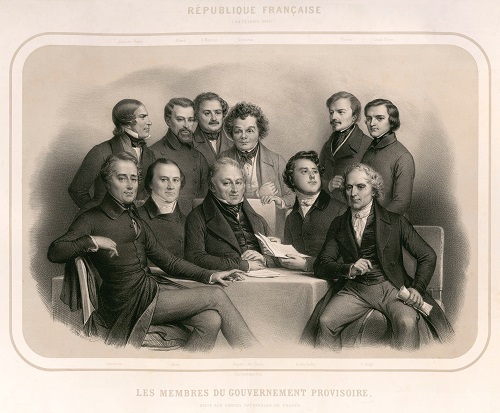 Members of the provisional government of 1848. In the left foreground president Lamartin, at the very right the first of many finance ministers responsible for the contest: Michel Goudchaux.

A Currency for a New Society

While the leaders of the revolutionary forces were debating whether the right to vote should actually apply to everyone – of course, we’re talking about the male part of France – or only to the wealthy social classes, the provisional government decided that the French currency needed a new face. A king’s portrait certainly no longer belonged in citizens’ wallets!
Hence, on 3 May 1848 the finance minister started a contest to create coins “au type de la République”. He called for designs for the denominations of 20 francs, 5 francs and 20 cents. Each participant had to hand in the original die, a coining die and all punches used for the matrix – for the obverse and the reverse. The designer of the winning pattern received 10,000 francs, however, he then had to re-design the piece according to the jury’s instructions. In addition, he was commissioned to work on two to four other denomination as well, and was paid for that on top.
The finance minister awarded 1,000 francs to the second and third place each. The other participants didn’t get anything in return for their work and the considerable sums they had to invest in the production of the dies.

Changing Ministers and Many Questions

First of all, the call for proposals confused many medallists. What did monsieur finance minister mean by a coin “au type de la République”? A joint letter was drafted and, surprisingly, they received an answer already on 12 May. This wasn’t surprising because of the characteristics of sluggish bureaucracy, but because the former finance minister had been replaced by economic journalist Charles Duclerc one day earlier, on 11 May.
He passed an additional edict on 18 May. It stipulated that all participants had to register by 15 June. 23 September was set as the deadline for submitting the patterns. Regarding the design, the new edict specified: “The artist shall invent, not imitate; as new republic we need a new type of coin. Consequently, the Phrygian cap that covered the head of the republic on old copper coins does not need to be shown as headgear on the coins participating in the contest. Nevertheless, this symbol may be used as one of the attributes.”
By 15 June, 45 artists had registered for the competition. 32 of them delivered their patterns by the extended deadline on 31 October. Once again, there was a new finance minister to receive them. Following a change in government on 28 June, Charles Duclerc had been replaced by Michel Goudchaux, who, in turn, was removed from office six days prior to the deadline. 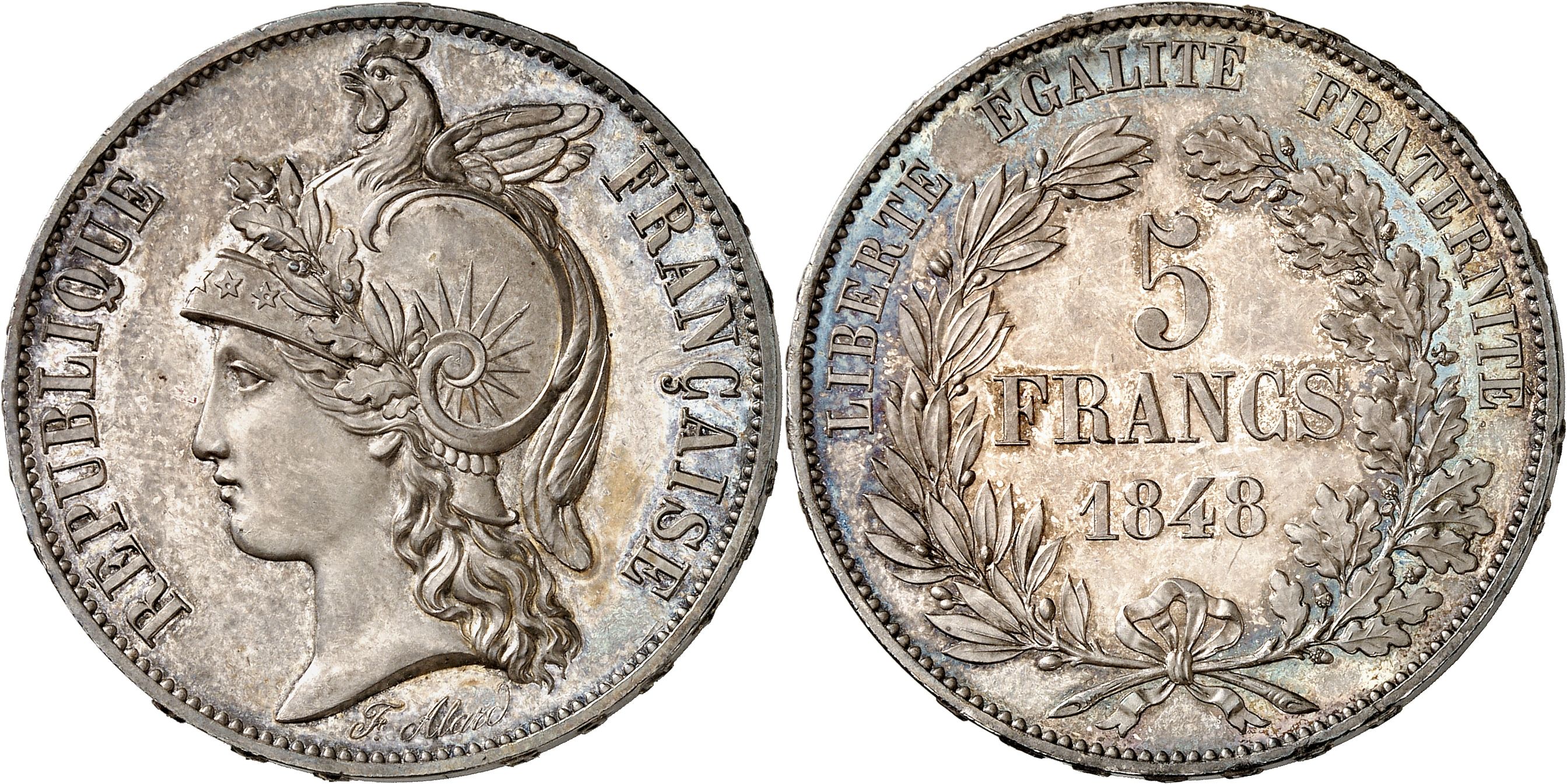 32 Artists with Different Ideas about the Republic

While the 32 artists were still racking their brains about how to best depict a republic, conservative France had regained its strength. And on 6 November 1848, when the jury met for the first time, Napoleon’s nephew Charles-Louis Napoléon Bonaparte, who had returned to France during the February Revolution, had already started fighting for the office of President of the French Republic.
However, together with the liberal forces, we can still dream of a liberal republic and see how French artists imagined that republic to look like.
But who had taken part in the contest? Well, among the artists were famous personalities like the chief engraver of the Paris Mint, Jacque-Jean Barre (1793-1855), Geneva medallist Antoine Bovy (1795-1877) and the “father of the modern medal” Eugène André Oudiné. But there were also unknown figures among the participants such as the then just 30-year-old André Vauthier-Galle and Frank Magniadas, who’s almost forgotten today.
All artists faced the challenge of creating a woman’s head that was to be recognised immediately as personification of the French Republic. A difficult task. Women’s faces look similar, and the attributes associated with the republic were used all over Europe. Thus, they had to create something spectacular in order to convince the jury, which was composed of 11 people with a total of 9 votes and also included famous artists like Jean-Auguste-Dominique Ingres and François Rude, who was very famous back then.
At the latest by 10 November 1848, the jury had received the patterns of all coins. 10 off-metal strikes in the metal the artist wanted his design to be struck from and five additional off-metal strikes in tin were made for each submitted proposal. In addition, 161 complete off-metal strike collections were made for the many enthusiastic collectors. 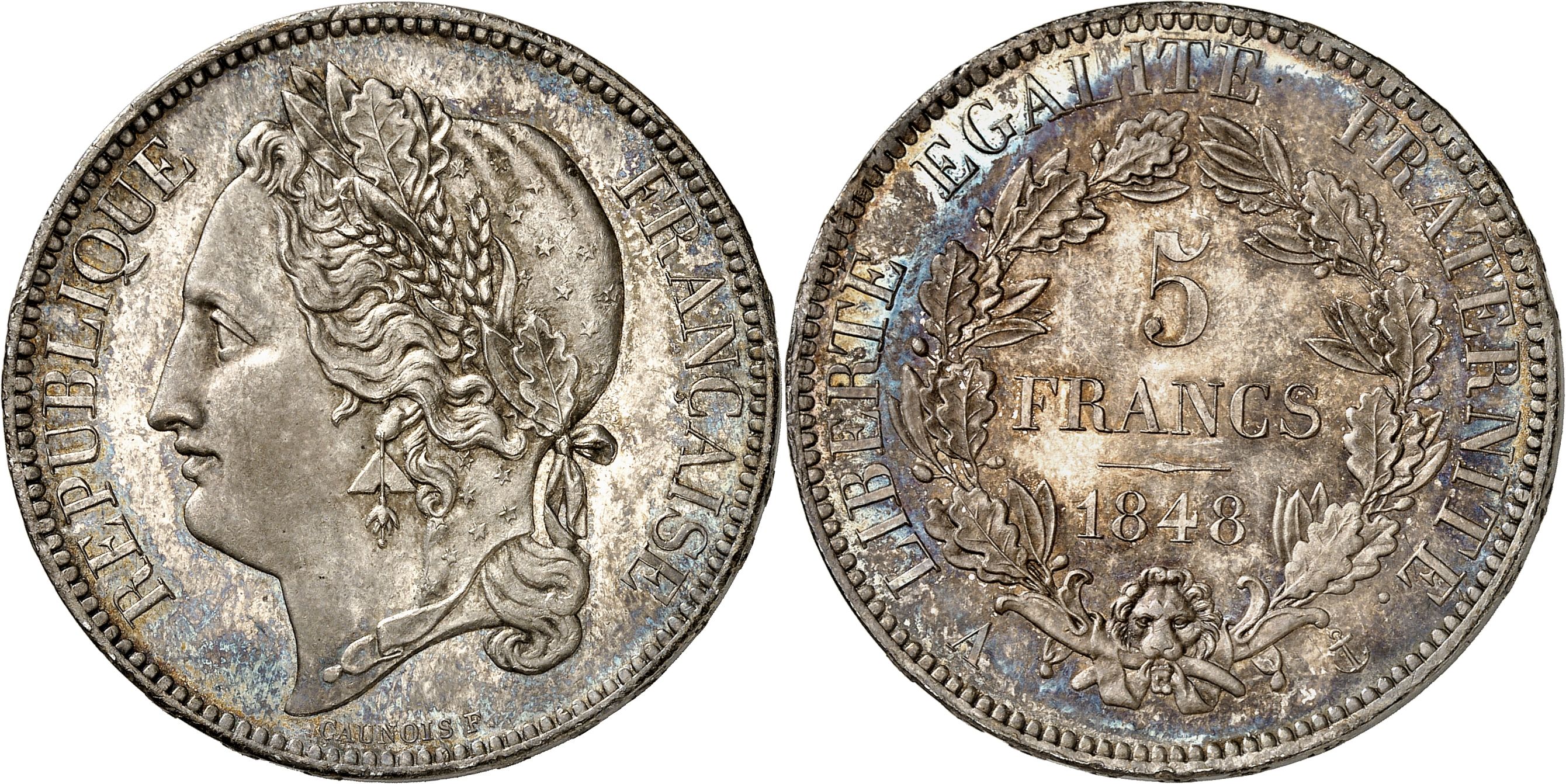 When designing the republic, most artists limited themselves to a classical profile combined with an impressive wreath incorporating almost any leaf, blossom or fruit that was of symbolic value. They used laurel leaves for triumph, oak leaves for proximity to citizens, ears for fertility, ivy and grape leaves for wine production. Some of them also depicted a handshake for unity and a star or an isosceles triangle for equality.

Medallist Jean François Domard (1792-1858) paid particular attention to incorporating the motto of the French Republic – liberty, equality, fraternity – into his image of the republic: the Phrygian cap covering the head, which had once been the symbol of freed slaves, symbolizes liberty, the diadem in the form of an isosceles triangle symbolizes equality. The fasces containing several rods is unbreakable as a whole while the individual rods can be broke easily, it represents the virtue of fraternity. 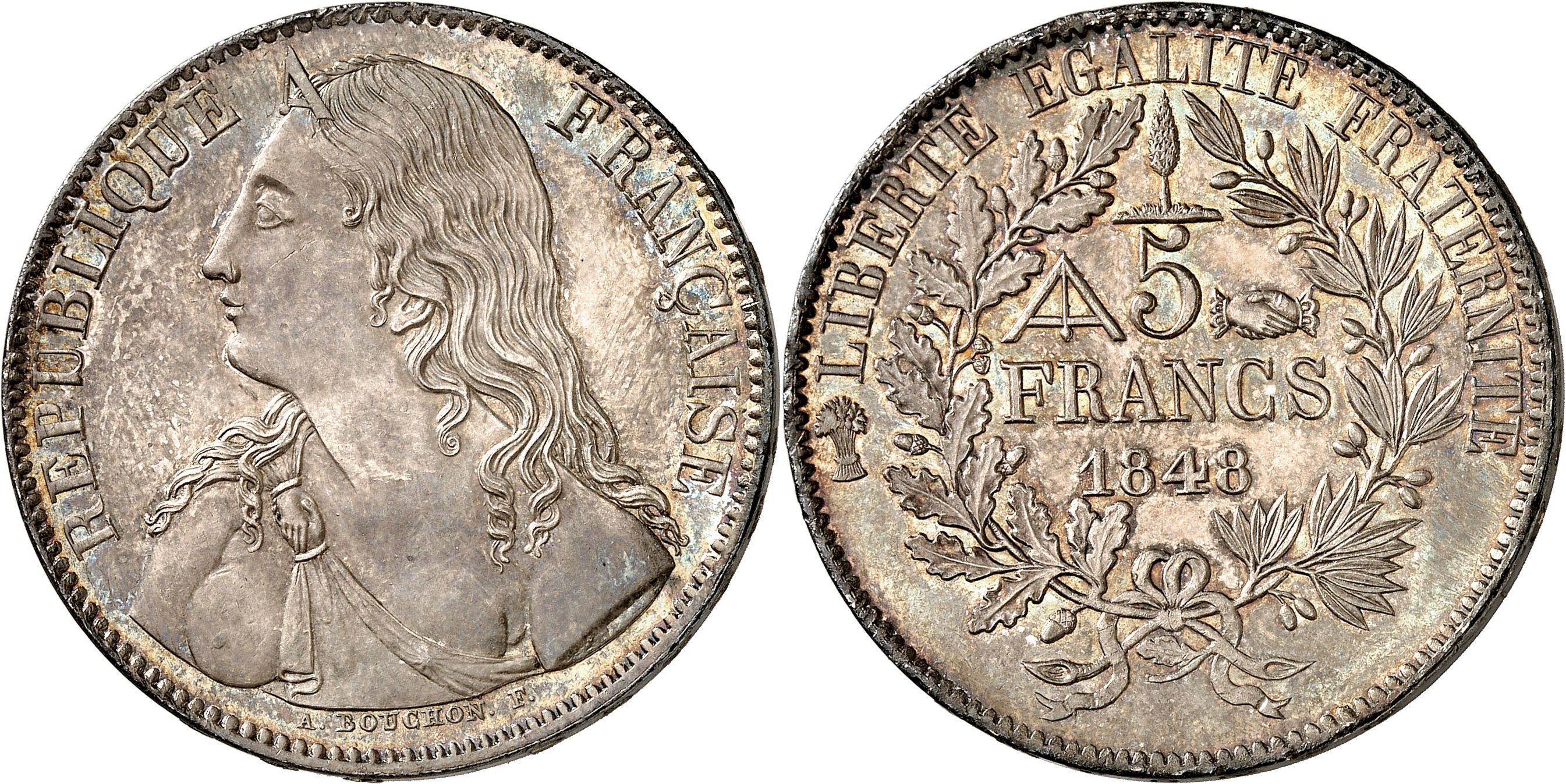 The design of A. Bouchon, who is completely forgotten today, referred to an ancient myth known in art history as “Caritas Romana”: A man called Cimon had been sentenced to death. His daughter, who was allowed to visit him daily, saved him by breastfeeding him. 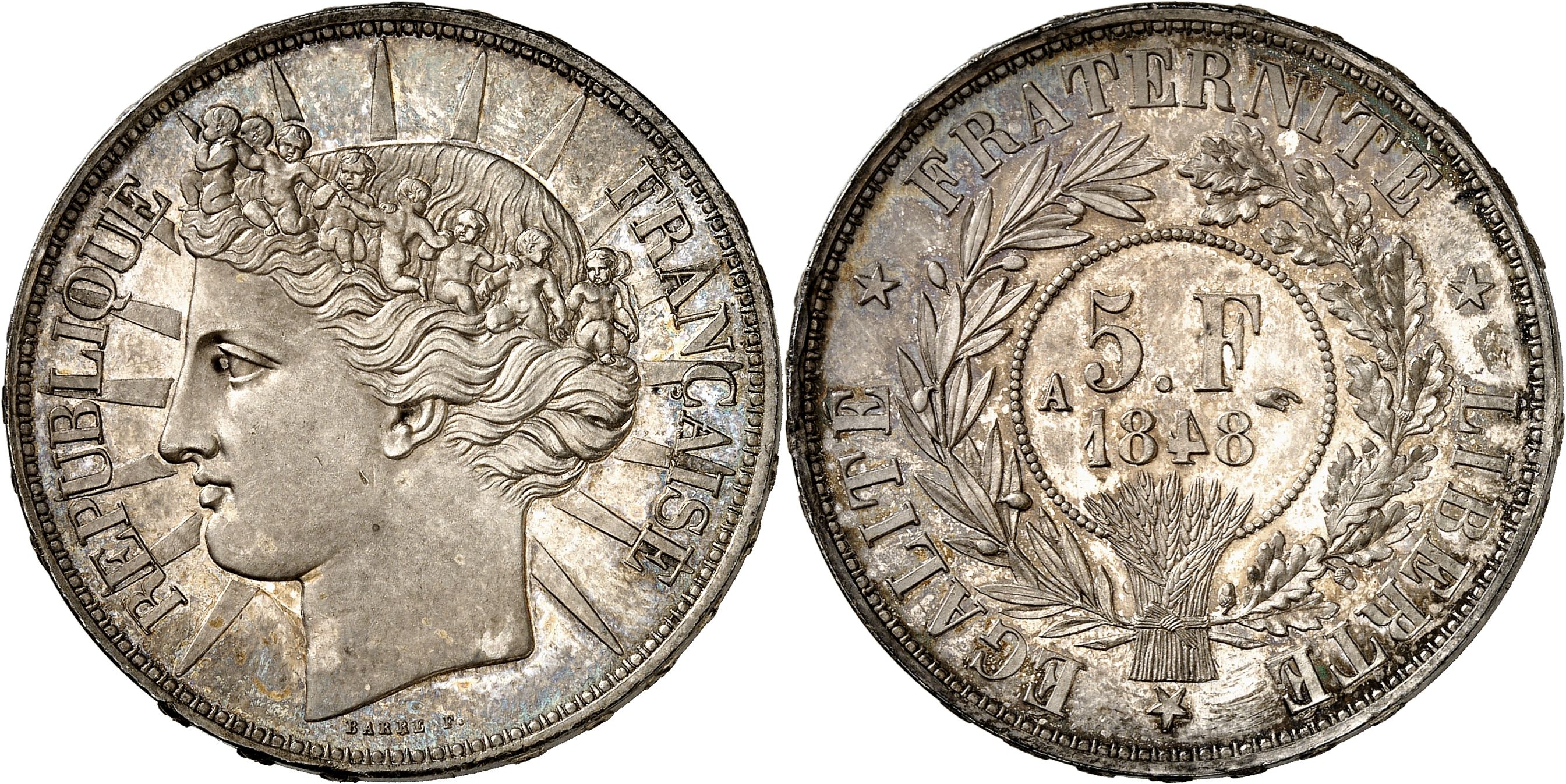 Even though he used a design dating back to 1845,  Jacques-Jean Barre’s personification would have been a truly intelligent innovation: He reinterpreted the mural crown, which had often been used for personifications in ancient contexts. In his opinion, the most important defence of any state was not its fortifications but its citizens, thus, Barre’s mural crone is made of people. 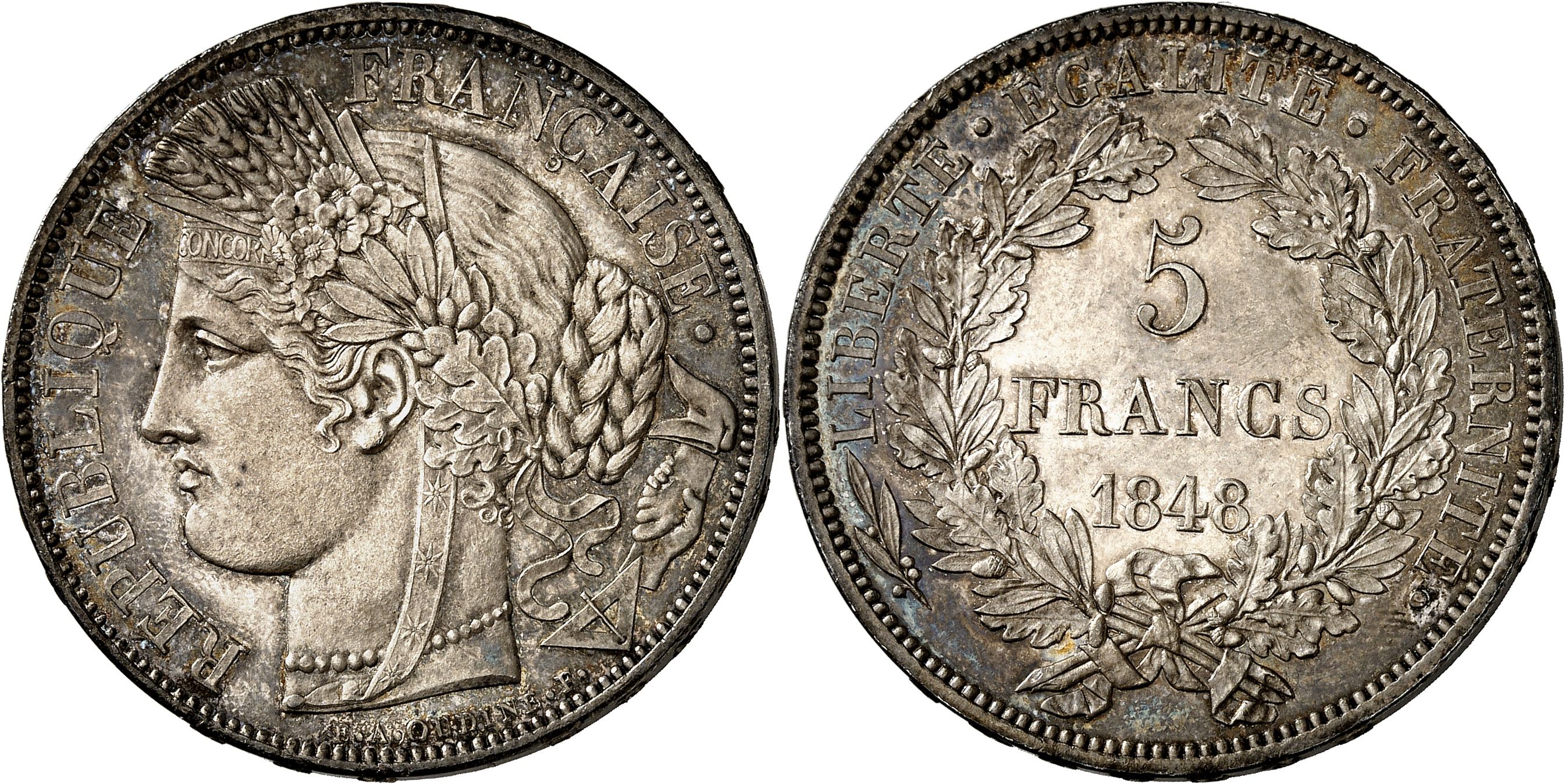 On 25 November 1848 the jury chose the winner. However, only the representatives of eight votes appeared, which means that there was an unpleasant possibility of a stalemate.
Nevertheless, regarding the 5 francs piece there was already an absolute majority in the 4th ballot: Eugène André Oudiné got five votes in favour of his design (fig 7). Perhaps it was an advantage that one of his students was a member of the jury. The second place was awarded to Routinier Barre (fig 6), the third to Jean François Domard (fig 4).
Barre certainly was quite angry about this decision. He ranked second in all three categories, and therefore did neither receive the 10,000 nor the commission for creating other coin types. He merely won a total of 3,000 francs. The other artists left empty-handed were upset, too. They tried to insist on getting a second chance by forcing the Ministry of Finance to re-open the contest. 20 of them addressed the ministry in a letter of protest. Their main argument was that not all members of the jury had been present at the final decision.
The correspondence initiated by the complainant went on until 28 July 1849 and ended with the compromise that the unsuccessful artists at least were given back their dies for further use. Some of them were used to mint new medals, others for the production of collectors’ issues of the patterns.
Due to the dispute, the minting of new coins did not start until September 1849. But by that time the political wind had already changed direction. 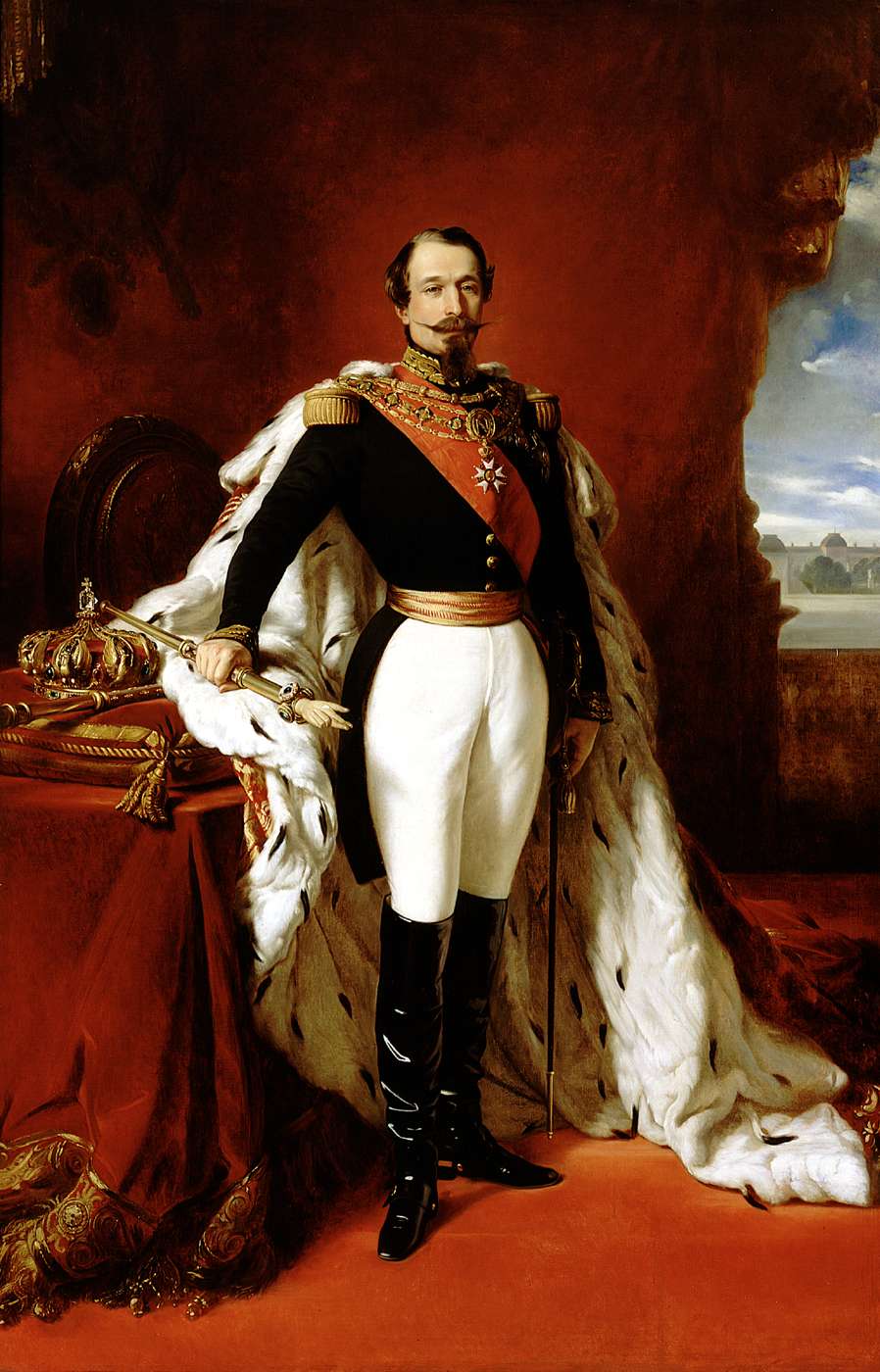 The Nephew of Great Napoleon

On 20 December 1848 it was announced that Napoleon had won 74.2% of the votes in the election of the first president of the French Second Republic. It became clear that especially in rural areas, where men were allowed to vote for the first time ever, conservative believes were far more deeply rooted than urban intellectuals could have imagined.
While the mints of Strasbourg and Paris minted coins featuring the head of the new republic, Napoleon travelled throughout the country and prepared a coup d’état. On 2 December 1851 he dissolved the National Assembly by force. The bloody battles that broke out as a result were won by Napoleon. And, once again, he used the well-known name of his uncle to re-establish the empire by means of a plebiscite. That was the end of the French Second Republic.
And when Napoleon III signed a decree on 3 January 1852 on minting of new coins featuring his portrait, it did not take long for them to be produced in large quantities.
The republic only returned on coins when Napoleon was deposed in 1870.