Special Collections and a Gold Treasure at Künker 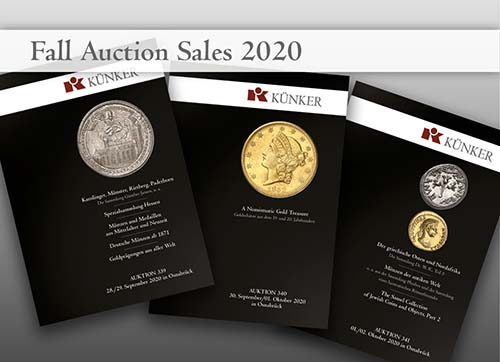 Three auctions will be held during the Fall Auction Sales from 28 September to 2 October 2020. The auction will kick off with the Günther Jansen Collection of Carolingian coins as well as coins and medals from Münster, Rietberg and Paderborn. This will be followed by a special collection from Hesse, before some truly unique pieces from Germany, Europe and around the world will come under the hammer. There’s a separate catalogue dedicated to ‘A Numismatic Gold Treasure’. Under this title, Künker will be offering nearly 1,300 lots for collectors and investors, featuring gold coins from all over the world. Notable series come from Germany, the USA and France. The Auction Sale Week will close with ancient coins from various collections, including the fifth part of the Dr. W. R. Collection, featuring coins from the Greek East, as well as the second part of the Samel Collection of Jewish Coins and Objects.

The Günther Jansen Collection takes us all the way back to the beginnings of European coinage. Mr. Jansen, a lawyer specialising in construction law, came from Münster in the German state of Westphalia. So, he collected coins from his hometown, along with Carolingian pennies.

If you’re familiar with this area, you’ll love the wide range of early medieval rarities, mostly from the 8th and 9th centuries, which will open the 339th Künker auction. The pieces date from the Merovingians to Hugh the Great. Some of the coins have impressive origins, such as the Fürstenberg Collection, the de Wit Collection and the Curti Collection. One impressive highlight is a denarius of Charlemagne, of which only two specimens remain, from the minting period between 812 and 814, possibly produced in Cologne.

The coins from the Diocese of Münster from the Jansen Collection follow on almost seamlessly in terms of chronology. Experts will find early coinage from the 11th century as well as rare gold gulden from the 15th century. The list goes on, featuring ducats, talers and small coins: the collector devoted himself to this area, compiling his collection with meticulous care. As is usually the case with special collections, there truly is something for everyone. Estimates start at 50 euros.

A particularly remarkable highlight is a series of the popular ‘wiedertäufertaler’, in which only specialists would be able to distinguish between the original contemporary pieces and the restrikes, which were minted later for the coin collectors of the 17th century. For those who wish to use a term from Russian numismatics, these coins could be called "Novodels".

There are a few coins from the County of Rietberg, followed by coins from the Diocese of Paderborn, ranging from simple groschen to opulent reichstaler. The reichstaler from 1656, for example, depicts an intricate portrait of Dietrich Adolf von der Recke who, as treasurer of the cathedral, was able to retrieve the Liborius relics, plundered by Christian the Younger of Brunswick (known as ‘Toller Christian’ – ‘Mad Christian’), and return them to Paderborn. This adds an entirely new meaning to the wonderful representation of Liborius on his half taler from 1657.

A splendid guldengroschen from 1502 kicks off the Special Collection Hesse, which features almost 90 lots. Although the collection focusses on talers and gold coins, it also includes small coins and medals. As far as possible, the collector has prioritised excellent condition. So if you want to get your hands on a perfect specimen from the famous ‘Weidenbaum’ (English ‘Willow tree’) series, you’ll find an extensive selection in this collection, as well as rare talers and ducats, graded ‘extremely fine’ or better.

German Coins and Medals / The House of Habsburg

That collection will be followed by German coins and medals, with around 500 lots. At this point, we’ll just mention the two most expensive coins on offer a reichstaler by Count Adolf of Bentheim-Tecklenburg-Rheda, minted in 1618. This piece is extremely rare. It is the only known specimen. Another extremely rare piece is the double reichstaler from Stralsund, which was minted in 1611.

Of course, if you like coins from the German Empire, you’ll find a large selection of them here, in excellent condition as usual. Collectors will find plenty of rarities, particularly among the gold coins for example, a Bavarian 20-mark from 1913 (extremely fine-FDC), 20 mark 1874 by Frederick William, Grand Duke of Mecklenburg-Strelitz (FDC), 10 mark 1882 by Heinrich XIV. von Reuss (FDC) and 10 New Guinean mark 1895 A (PF 64 CAMEO).

Around 140 lots with German gold coins and medals, including many pieces made from river gold and a small series from the Kingdom of Westphalia, complete the selection. One outstanding piece is a gold medal of 8 ducats, which was commissioned by the imperial house in 1706 to mark the second anniversary of the relief of the cities Augsburg and Ulm in the War of the Spanish Succession.

And that brings us to the House of Habsburg. Fans of these coins will have approx. 50 lots of gold pieces and 50 lots of silver pieces to choose from, including pieces that are very rare to find in this condition.

Coins and Medals from Around the World

Whatever your preferred area of collection, it’s definitely worth taking a cLote look at the auction catalogue. Just think of the fascinating gnadenpfennigs by Gustavus Adolphus of Sweden. Pieces like the ones on offer here were once a sign of supreme favour with the King. They were given to favourites, who would wear them as a sign of their loyalty. To do this, people would have to buy long, heavy gold chains, although – if you were a very special favourite – the King would give this to you along with the gnadenpfennig. Gnadenpfennigs are so fascinating because they represent the transition from coins to orders and offer an authentic insight into the extent to which coins and medals were used as diplomatic gifts to initiate and stabilise relations in the early modern period.

The coin with the highest estimate in the auction – 150,000 euros – comes from the USA. It is the Congressional Gold Medal, awarded to Alexander Malcomb for his conduct in the Battle of Plattsburgh.

Both collectors and investors will love auction 340. An extensive batch of gold coins will be auctioned, comprising almost 1,300 lots, including numerous lots with several gold coins of the same type. This batch includes an extremely wide range of grades, not only featuring ‘very fine’ coins but also many pieces graded ‘extremely fine’ and better. These include numerous rarities, so if you’re searching for something special, be sure to take a careful look through the catalogue.

Most of the coins come from Germany, France, Great Britain and the United States of America, but collectors of pieces from Albania, Australia, Italy, Romania, Russia, Spain and the countries of the Habsburg Monarchy should also take a cLote look.

Many coins that are of particular interest to the international collector market have been graded by NGC.

The Auction Sale Week will cLote with a thick catalogue featuring coins from the ancient world, which will be auctioned on 1 and 2 October.

It will begin with the fifth part of the Dr. W. R. Collection, which this time contains coins from the Greek East. There is also an impressive wealth of rare bronze coins in above-average condition, from cities and by rulers rarely featured in coin collections. The small series ‘Armenia and Sophene’ is bound to draw a lot of attention. It consists of nearly 20 pieces that, despite their small size and occasionally crude die cutting, are rarely available in this quality. But collectors of coins from the Seleucid, Parthian and Sasanian empires will also find a wide selection to choose from.

A highlight among the Greek coins is a coin that the painter Oskar Kokoschka was once very fond of. The perfectly preserved didrachm from the city of Panormos was once part of his collection. A very talented die cutter must have been behind this extremely rare coin, which depicts an almost monumental male head.

If you collect coins of the Republic, you’ll find a rich selection of pieces on offer at great prices. The time of the Imperators and the civil war following the assassination of Caesar are especially well documented. Experts will find Republican aurei as well as rare pieces in extraordinary condition. The fact that there are nine different portraits just of Caesar speaks for itself!

In bronze, silver or gold – if you love coins of the Roman emperors, you’re sure to find what you’re looking for. With fascinating and historically relevant designs, pieces in perfect condition and reasonably estimated rarities, this part of the auction has everything a collector could wish for. From the perfect aureus of Pertinax with an estimate of 40,000 euros to an extremely rare quinarius of Galerius for 150 euros – whatever the focus area of your collection, you’re sure to find a coin you like.

After the Migration Period, Byzantium and oriental coinage – among the objects on offer here will be an extensive collection of approx. 1,100 oriental coins with an estimate of 10,000 euros – the auction will cLote with the second part of the Samel Collection of Jewish coins and objects.