Künker Kicks off Its Golden Jubilee

On 1 July 1971, Fritz Rudolf Künker founded a small coin shop in the little town of Schapdetten. Over the course of five decades, this small shop grew into the world-renowned Osnabrück auction house. This means that auction house Künker celebrates its 50th anniversary in 2021. The one-day premium auction on 28 January 2021 will kick off the anniversary year. It represents what Künker stands for: always at the service of their customers and always willing to adapt. Unlike in other years, the auction will not take place in Berlin as the World Money Fair had to be postponed for good reasons. The auction will be held in Osnabrück. Customers from all over the world can participate in the bidding process: whether by letter, phone, fax, email or digitally via live bidding – Künker is committed to offer a reliable service to all customers, regardless of their technical preference.

The same is true for the rarities offered in this auction: whether it be river gold or lösers, rare gold and silver issues, German States, Russia or orders and decorations; if you love outstanding numismatic objects, you will certainly find something to suit your taste in auction 346.

Selected Lösers from the Popken Collection

The spectacular centrepiece of the auction are 40 selected lösers of the Welf dukes of Brunswick-Lüneburg from the Friedrich Popken Collection.

There is probably nothing more impressive than these heavy lösers and their complex depictions. The first pieces were minted under Duke Julius of Brunswick-Lüneburg. On these first specimens, which are referred to as “Julius lösers” in contemporary sources, we can see the seven planetary deities, the twelve zodiac signs as well as quotes from the Bible arranged concentrically next to a small portrait and the coat of arms. Auction 346 offers two pieces of this first löser type of 1574: the extremely rare löser of 10 reichstalers and the even rarer löser of 5 reichstalers.

Another gem is the löser of 5 reichstalers of Augustus the Younger struck during the Thirty Years’ War. It features the duke as a general on a horse. Only a few years earlier, Augustus had established his position as new duke in a very fierce succession dispute. Nevertheless, the exclamation “tandem” (= finally), which can be seen in the left field, doesn’t refer to his accession to power. Instead, this word is intended to recall the “Privilegium de non appellando”, which was granted to Augustus in 1638. By means of this privilege, the emperor made it impossible for his subjects to take legal disputes to the Reichskammergericht (Imerpial Chamber Court) in Speyer or to the kaiserliches Hofgericht (Imperial Manorial Court) after the Augustus had come to a verdict. This variety of the “tandem” issue is especially interesting, as it is featuring a splendid mining scene.

The last of the three lösers we will show you is an example for the wealth of highly interesting pieces in this auction. It was minted to be distributed on the occasion of the funeral of John Frederick on 21 April 1680. The spectacular motif depicted on the reverse – a skeleton tearing off the leaves from a palm tree – picks up on an emblem shown on various wooden structures that were build for the funeral ceremony of John Frederick. 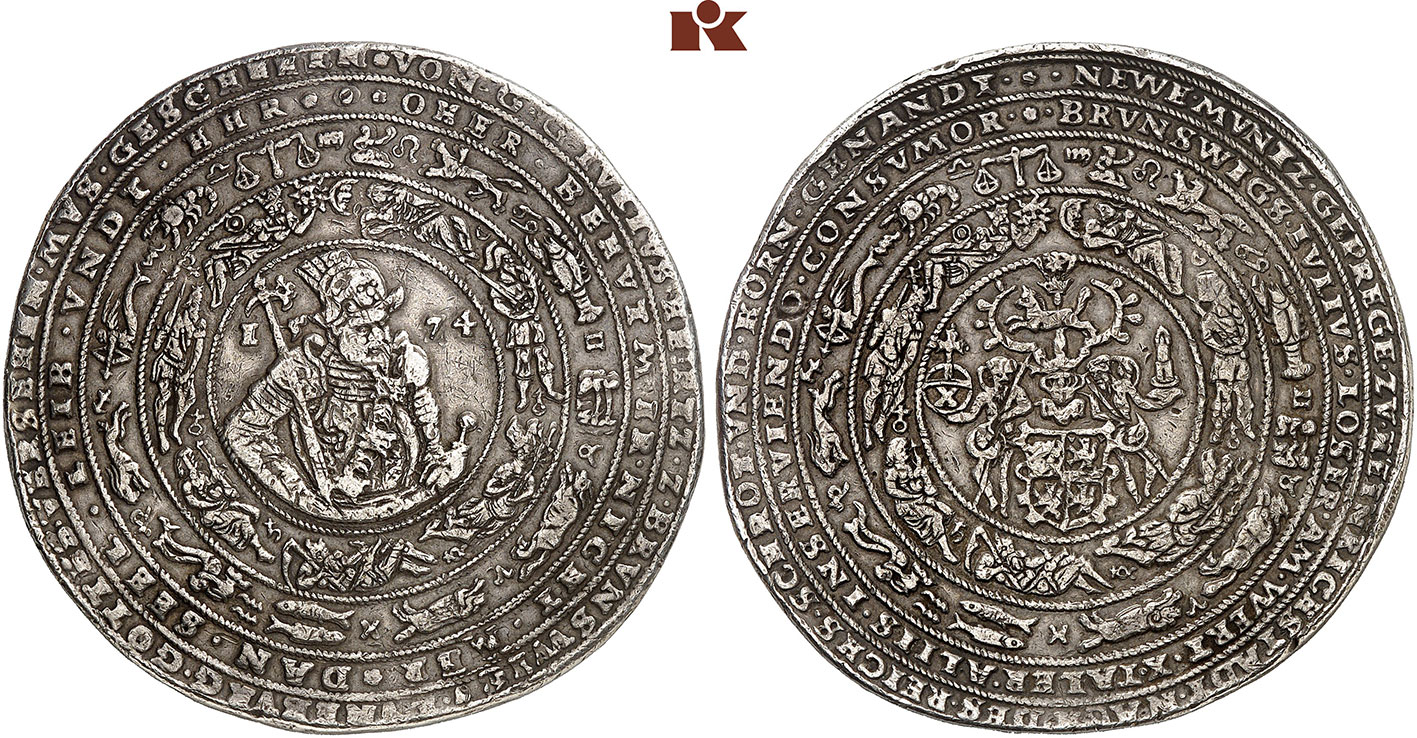 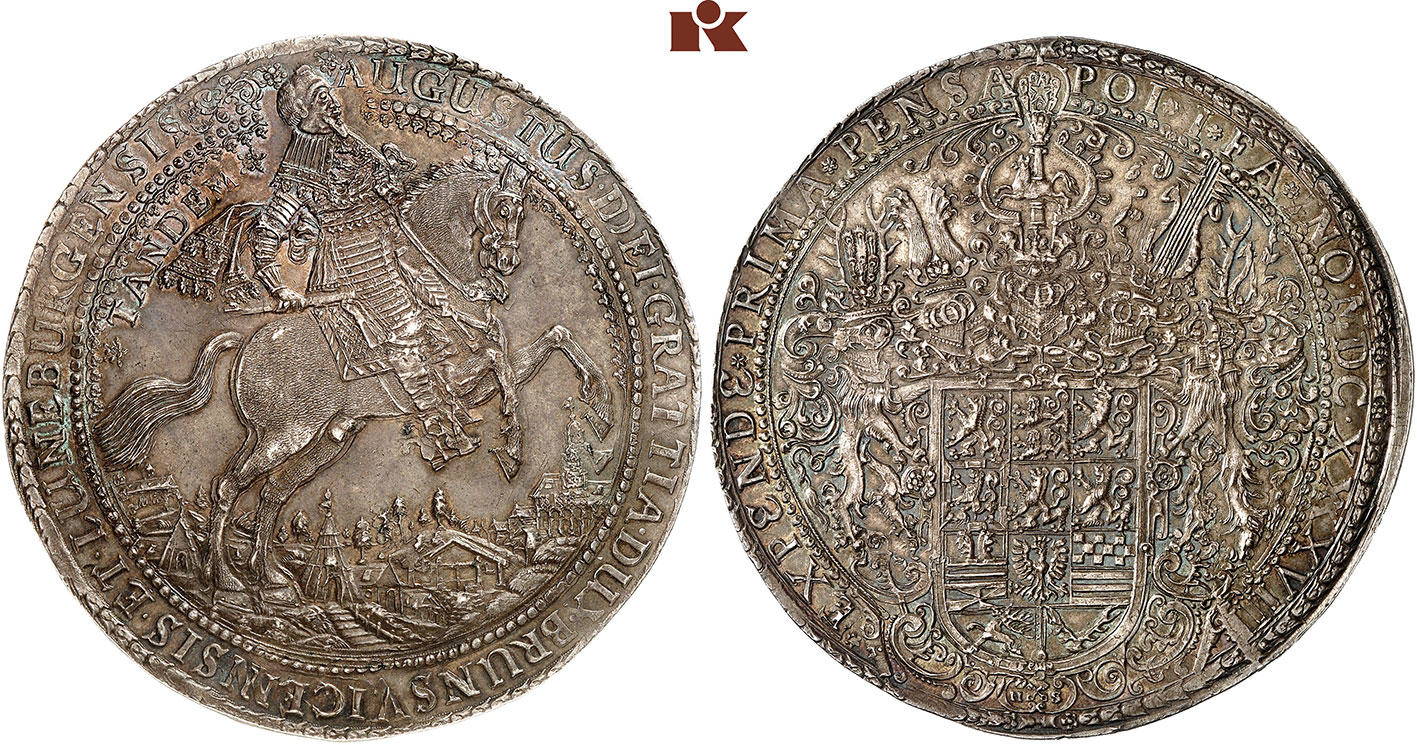 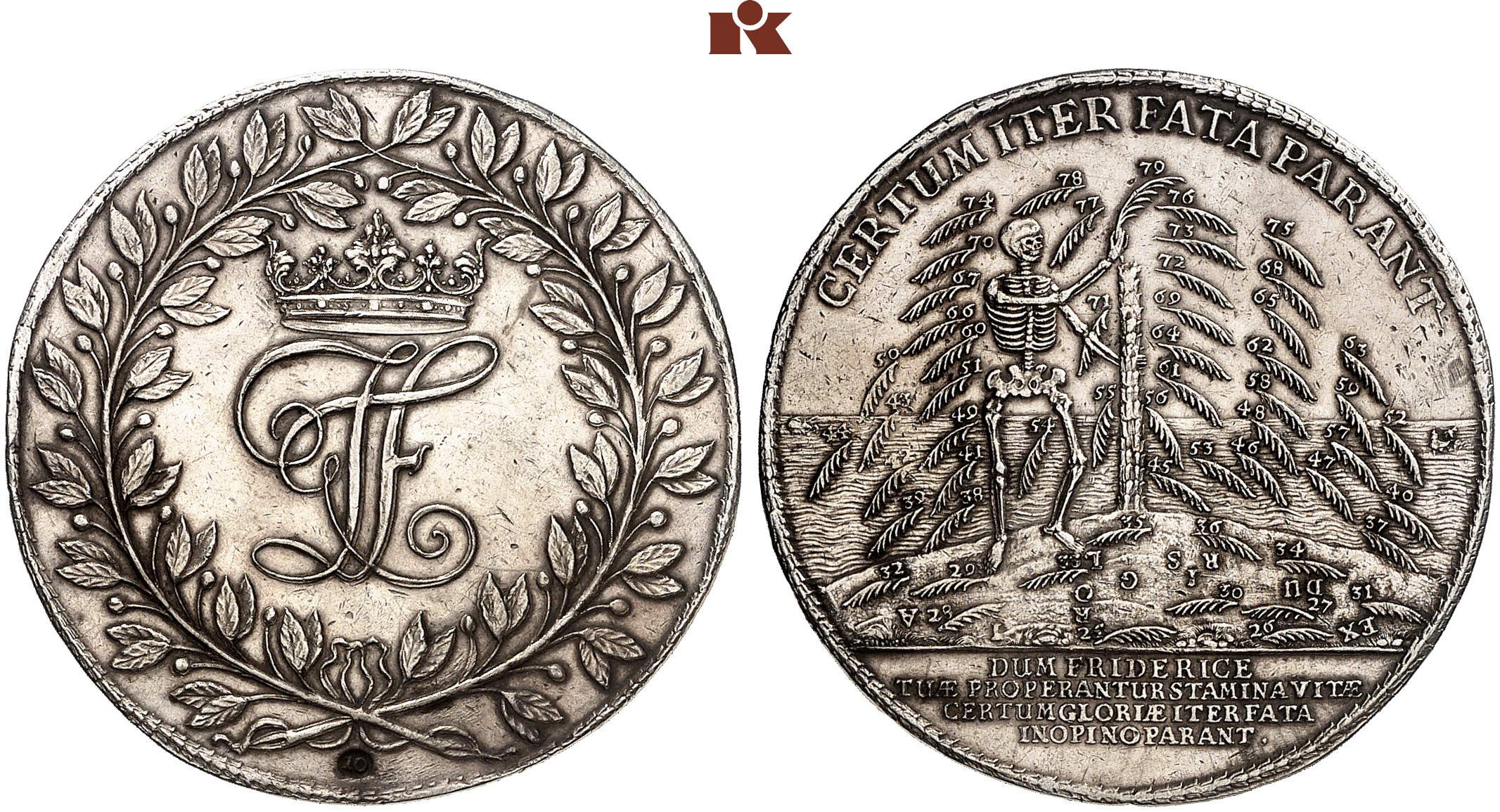 No. 139: Brunswick-Lüneburg. John Frederick, 1665-1679. Löser of 10 reichstalers 1638, Zellerfeld, weighing 9 reichstalers. Distributed on the occasion of the prince’s funeral. From the Popken Collection. 2nd known specimen on the market. Very fine. Estimate: 75,000 euros

A comprehensive series of extremely rare river gold issues can be found in the section of coins and medals from the German States. 25 (!) Rhine gold ducats from Baden, Bavarian issues made from gold of the Rhine, Isar, Inn and Danube rivers as well as a Hesse 5 gulden piece of 1835, of which only 60 specimens were minted, are part of this impressive offer. 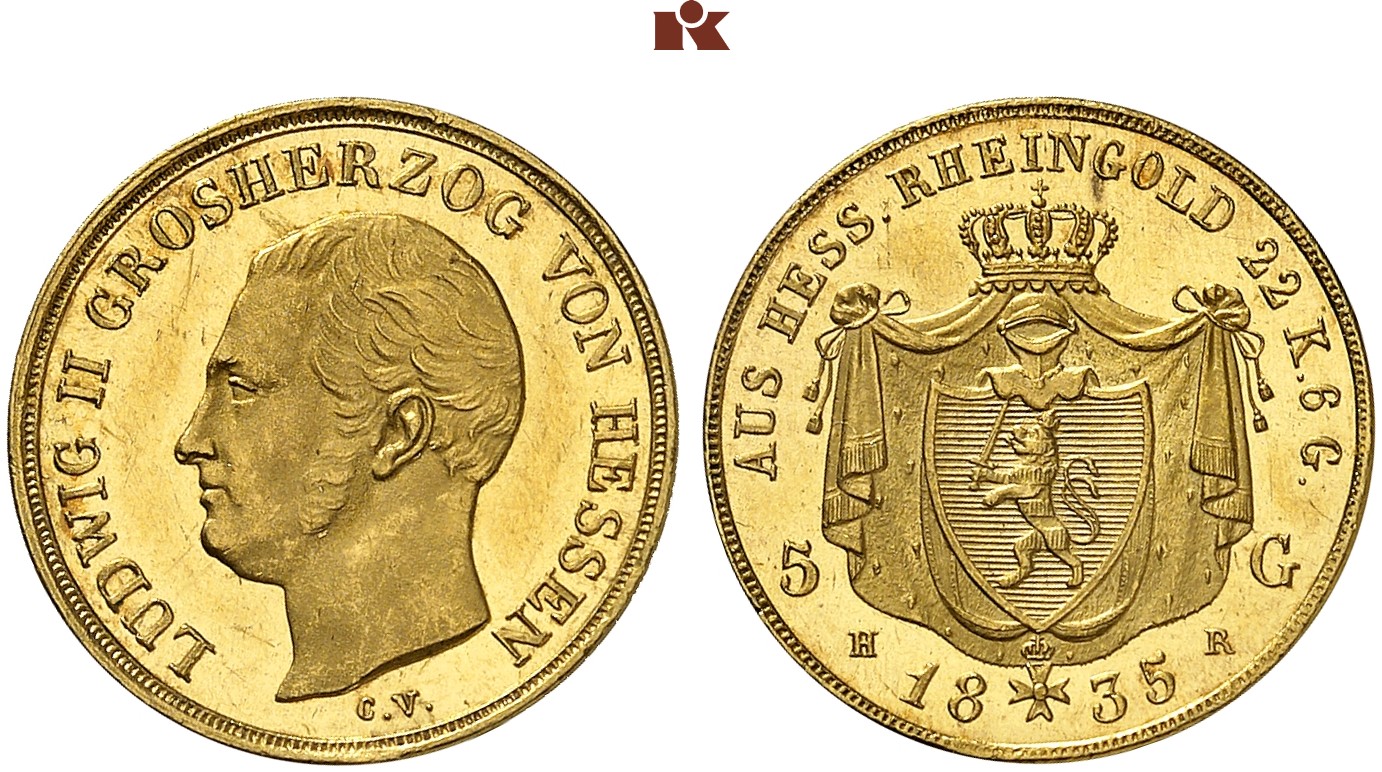 6 lots of this auction are from the Counts of Holstein-Schaumburg, 28 pieces from the County of Schaumburg-Lippe created in 1640: The issues offered in this sale are numismatic highlights of this field of collection.

Among them are a 10fold ducat by Count Ernst III of Holstein-Schauenburg, struck at the mint of Altona. The issue depicts him as general on his horse in full shining armour, the reins in his left hand, a mace in his right. Ernst III moved his residence from Stadthagen to Bückeburg. Not only did he erect a palace there, he also had first mews built, and the horses already amazed visitors at that time. In 1616, for instance, an Englishman wrote: “When I had passed the outer gate, I was shown the stables; I saw excellent and fine horses, including one that was naturally spotted like a leopard, and you could tell that this was the horse of a great prince and not of an ordinary man.” The realistic depiction of the horse on this coin shows how much importance Ernst III attached to noble horses and horsemanship in general. Therefore, it is all the more pleasant to see that baroque horsemanship is still practiced in Bückeburg today.

The most parts of the palace built by Ernst III burnt down on 21 February 1732. The north and the south wings were destroyed within a few hours. By means of a “fire tax”, the subjects paid for the baroque reconstruction of the building. Two splendid medals graded “almost FDC” show how the palace looked like before the fire and the reconstruction. 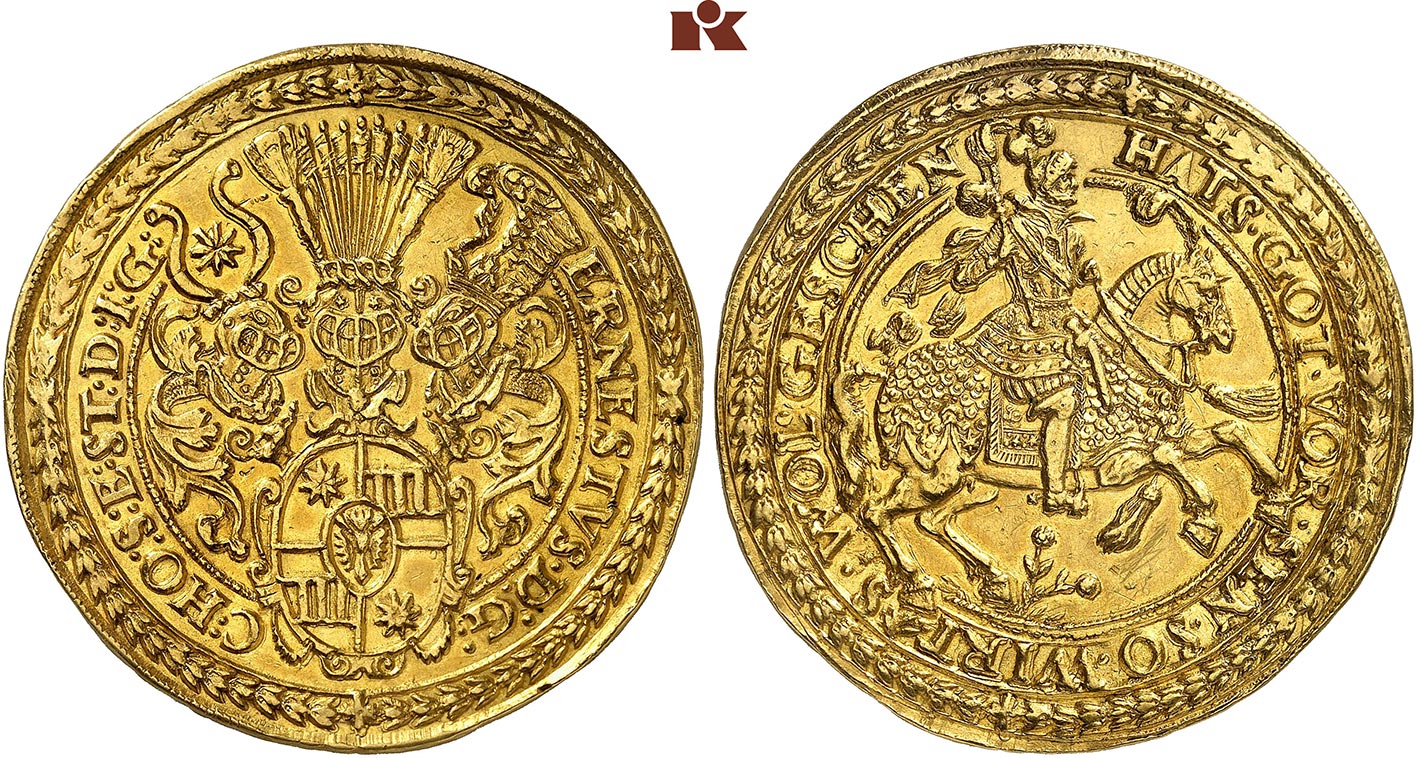 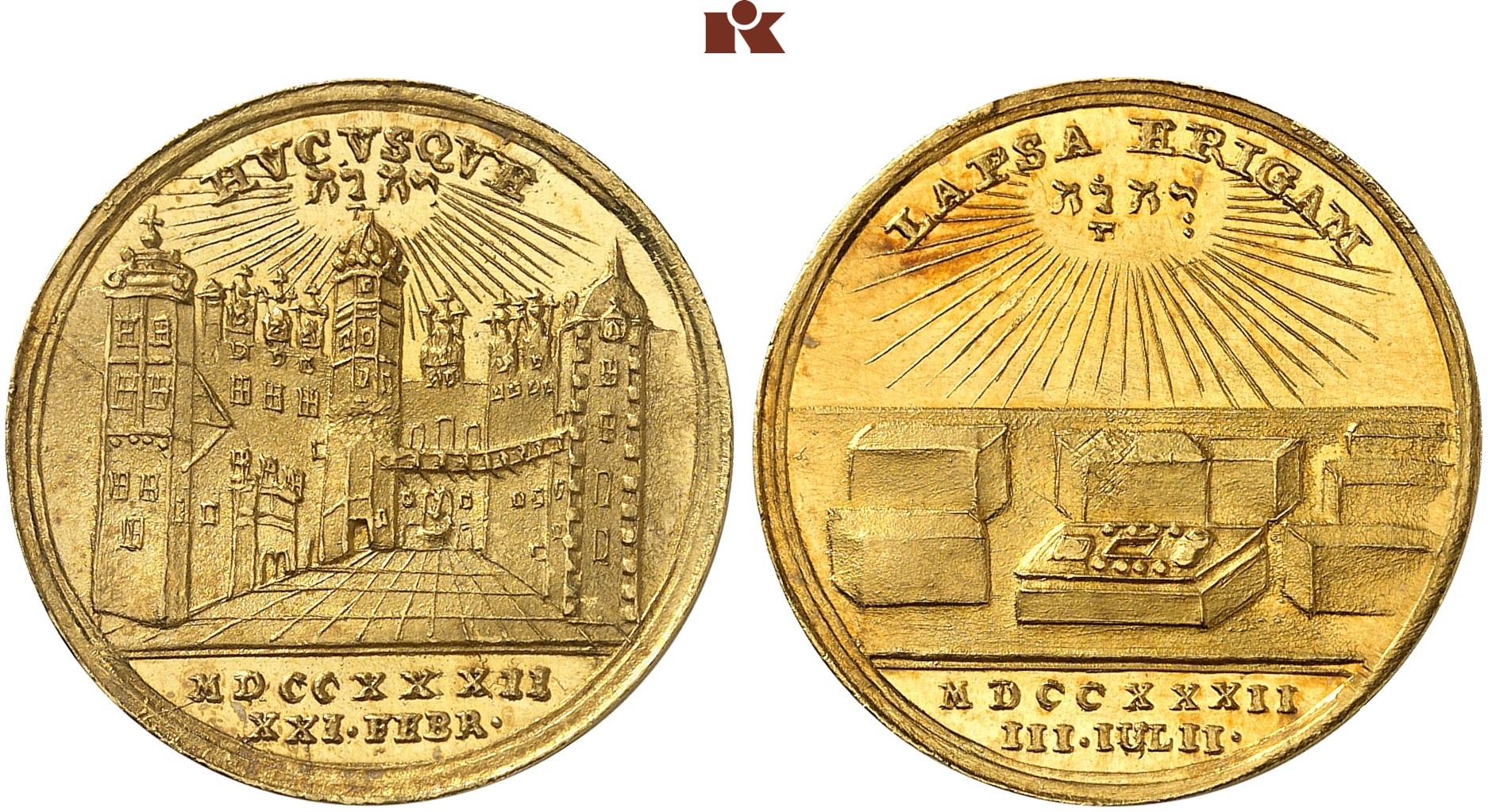 No. 375: Schaumburg-Lippe. Gold medal, unsigned, commemorating the fire at Bückeburg palace on 21 February 1732 and the laying of the foundation stone on 3 July 1732. Extremely rare. Almost FDC. Estimate: 5,000 euros

It is quite telling that we don’t have enough space to mention that auction 346 contains a series of Brandenburg’s Guinea ducats, a Prussian Levantetaler, the Holy Trinity Medal of Hans Reinhart the Elder, and a Hamburg bankportugalöser in FDC depicting a magnificent harbour scene. We had to limit our preview to the coins with estimates in the six-digit range!

A highlight of this auction is without doubt the sixfold gold gulden from Hamburg weighing 19.69g, minted in 1505 and estimated at 400,000 euros. It is a unique specimen, the first multiple gold coin of Germany. The fact that this coin was created in Hamburg shouldn’t come as a surprise. After the decline of the Hanseatic League and the discovery of America, the city of Hamburg was one of the great beneficiaries of the new trade routes. Thanks to its connection to trading cities at the Atlantic – Amsterdam, London and Lisbon –, merchants residing there had access to the international trade network. This gold coin is a symbol for the dawning economic recovery of Hamburg. While about 10,000 people lived there when this issue was minted, the population had tripled a century later.

It’s no surprise that the triple reichstaler of bishop Ferdinand of Bavaria from 1638, depicting the patron saint and the city view of Münster on the reverse, was part of an old collection in Cologne. After all, Ferdinand of Bavaria united no less than five bishoprics under his rule, including Cologne and Münster. His triple taler is extremely rare and estimated at 100,000 euros.

Two splendid gold coins of Augustus the Strong are part of the collection of a connoisseur and art lover. The first one is a sixfold ducat of 1709. The piece is probably unique, has an estimate of 100,000 euros and its reverse shows the AR monograph for Augustus Rex, which we are familiar with from talers made with the same die. This coin refers to the Polish kingship, which the Saxon prince successfully claimed in 1709 after the expulsion of his rival.

A 10fold ducat of 1711, also from the collection of a connoisseur and art lover, relates to a completely different title. The piece with an estimate of 150,000 euros was minted to celebrate the imperial vicariate held by Augustus the Strong between the 17 April and the 22 December 1711. It depicts hin in a pose that we know from the most famous monument of the city of Dresden. There is definitely a connection between the Golden Cavalier and the image on this coin: in both cases, the horse’s back is covered by a lion’s skin instead of a saddle, and in both cases, Augustus the Strong wears the Danish Order of the Elephant, which he received in 1701. On the reverse, the insignia of the German king are depicted on the left, the elector’s hat and sword on the right. The 8fold ducat of the same type which is as rare as the 10 ducat piece will be offered with an estimate of 100,000 euros.

A 10fold rouble of 1757 from St. Petersburg, whose die was made by Jean Dassier, is estimated at 150,000 euros. It shows a wonderful portrait of Elizabeth, the daughter of Peter the Great and future Catherine I. The special feature of this piece is a small punch that proves that the coin was once part of the Hutten-Czapski Collection.

Another piece from the collection of a connoisseur and art lover is one of the most beautiful coins of Basel, a 20 ducat piece of 1741 depicting a city view. The provenance of this exceptional coin could not be better. It comes from the Wunderly von Muralt Collection auctioned off in 1899. Afterwards, it was part of the Bachofen von Echt and Christoph Bernoulli Collection. This rarity has an estimate of 300,000 euros. 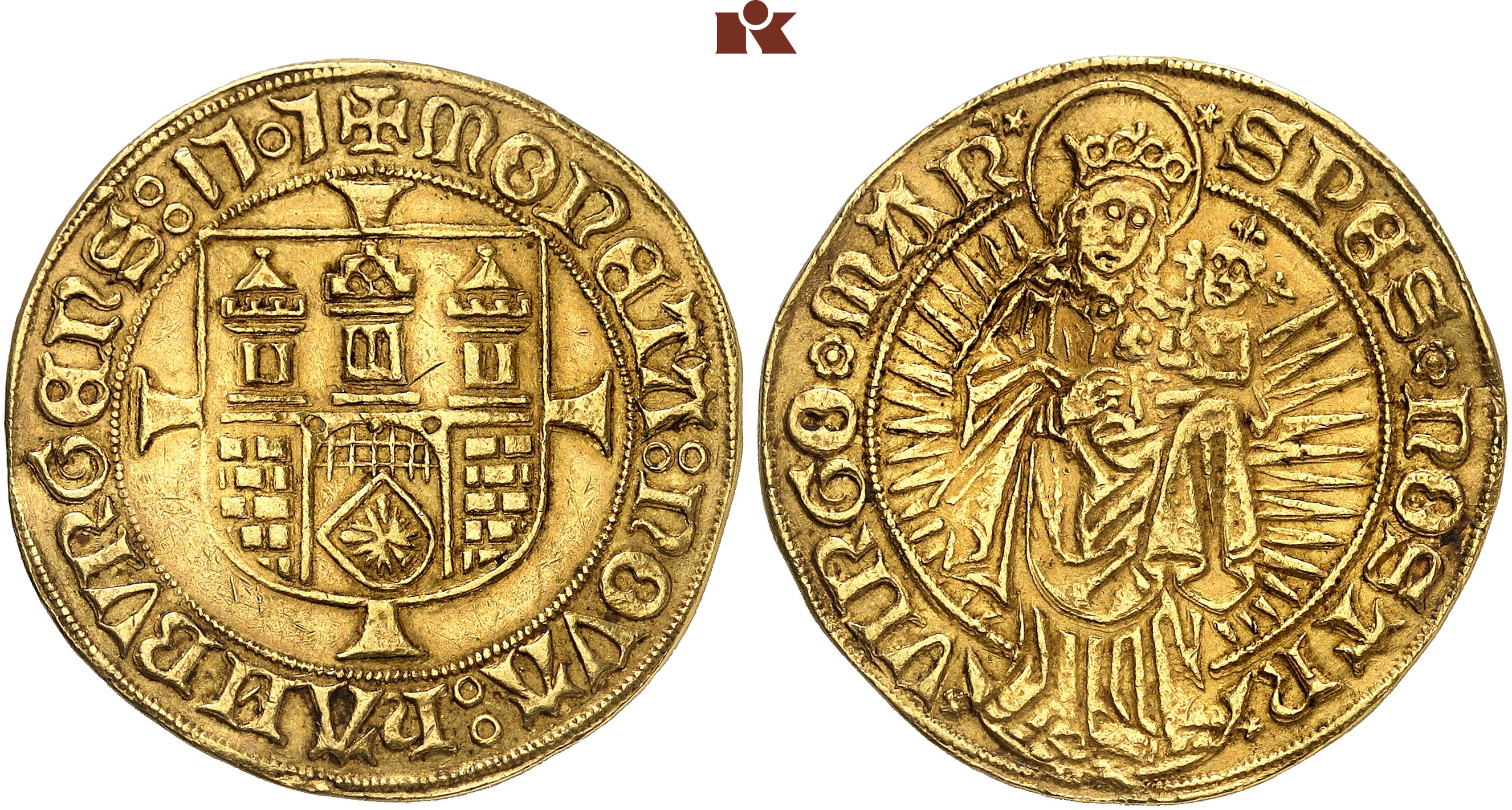 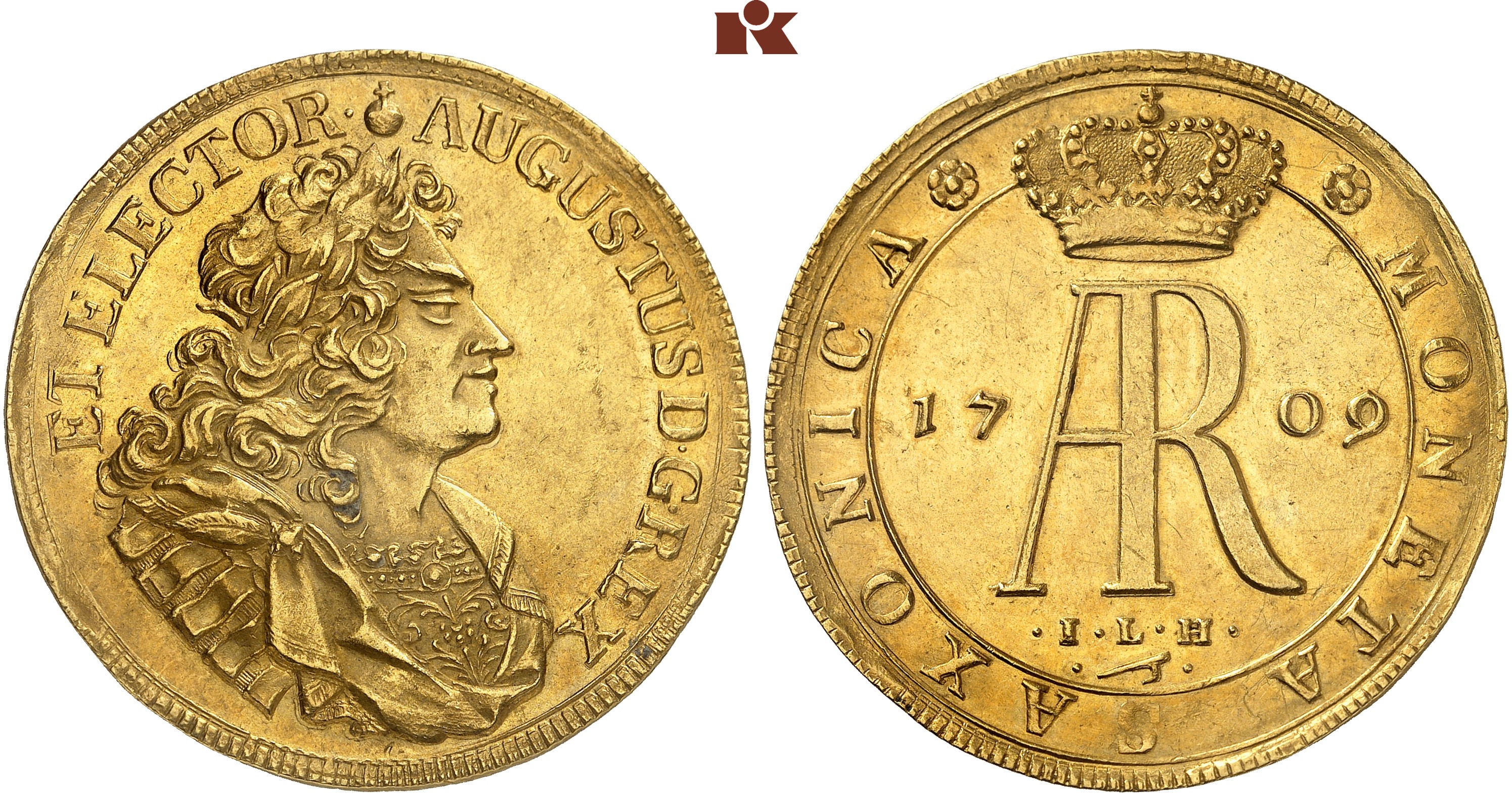 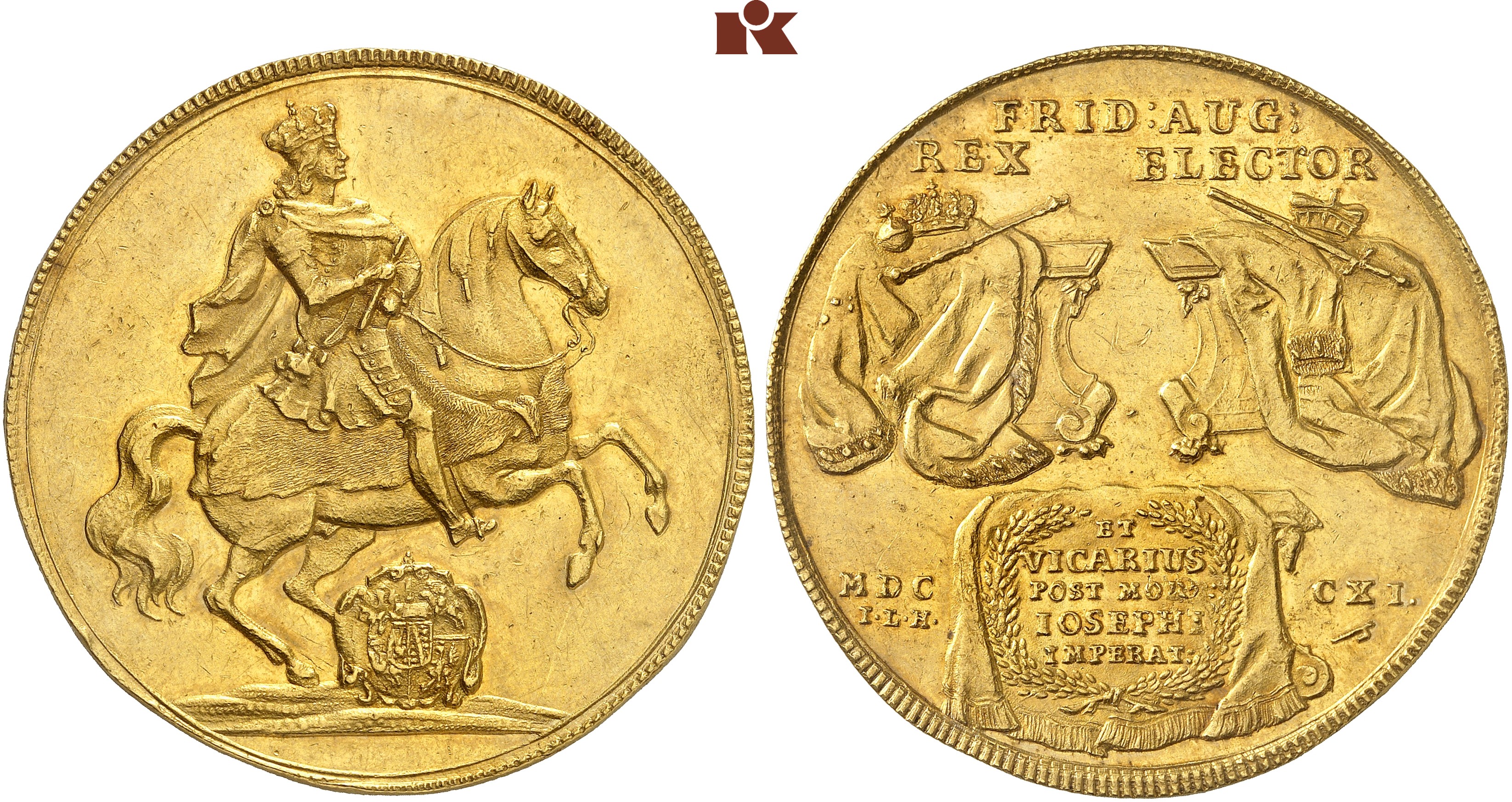 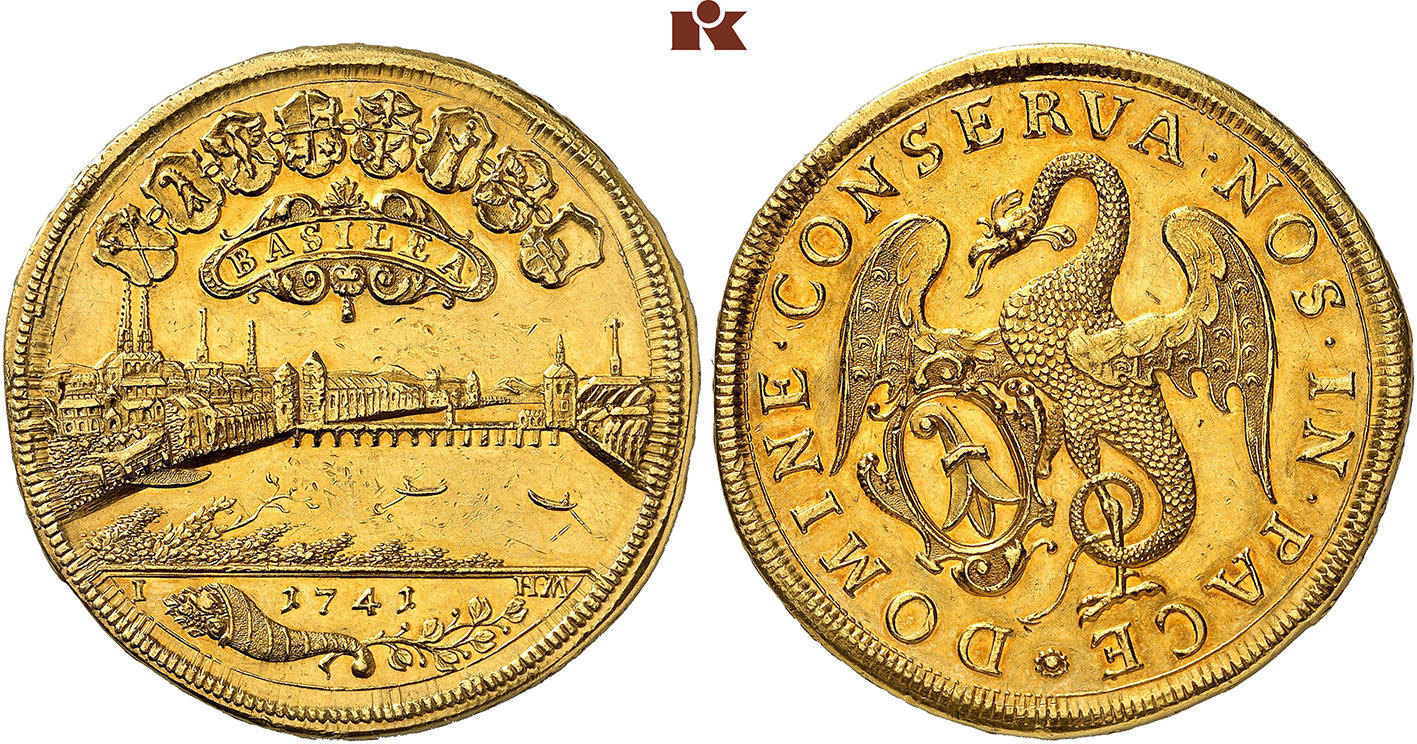 Michael Autengruber presents a total of 43 orders and decorations from Germany and all over the world in the order section of the auction. All of them are rarities, and we will only mention two items in this preview.

The highlight of this part of the auction is an extremely rare order of the Persian Empire called Order of the Sun and the Lion – Nishan-i-Schir-u-Khorschid. The piece with an estimate of 25,000 euros consists of an enamelled centrepiece depicting a resting lion to the left, the sun rises above the lion, 75 large diamond roses are arranged concentrically around it. 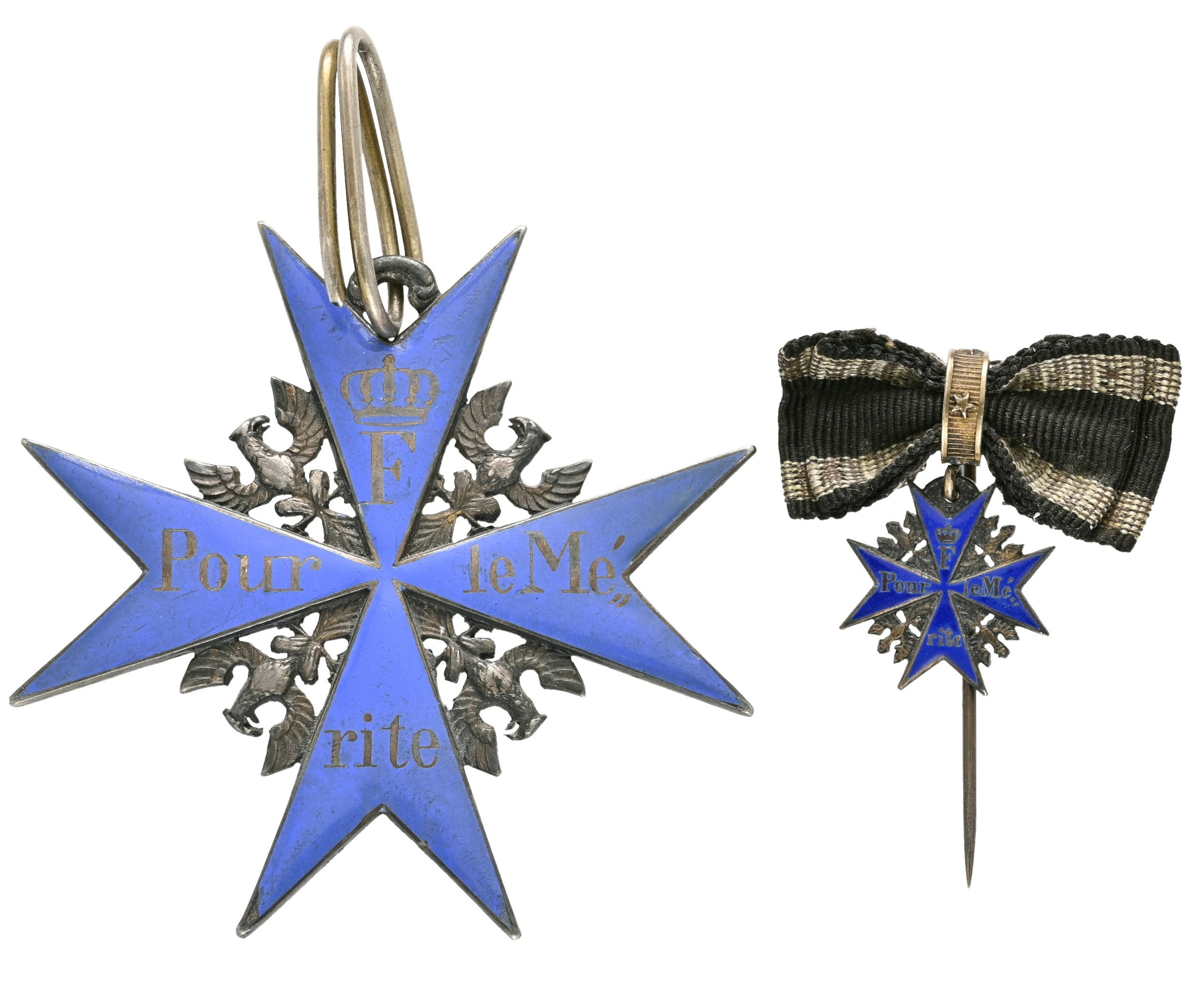 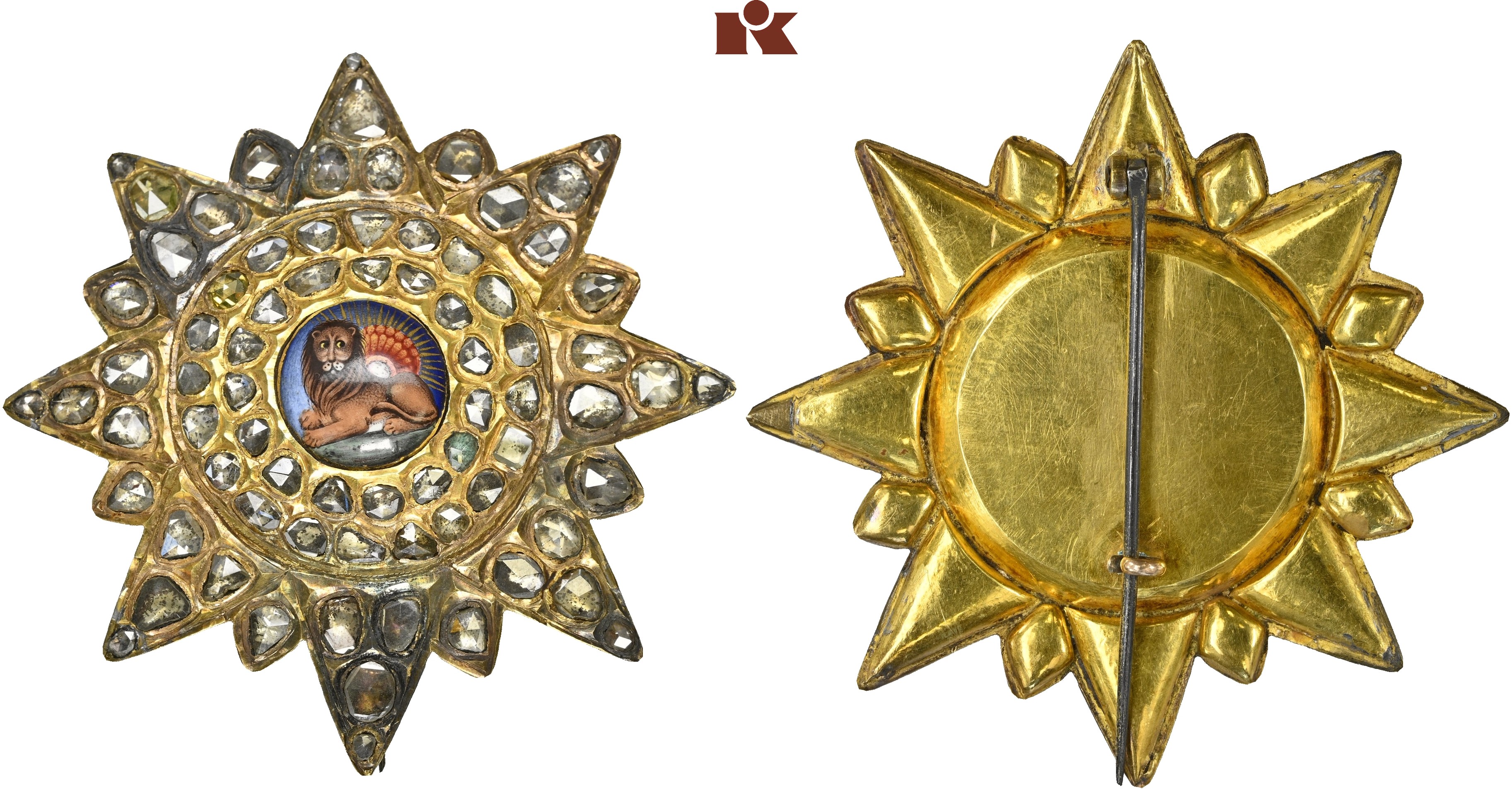 The catalogue can be ordered at Künker, Nobbenburger Straße 4a, 49076 Osnabrück; phone: +49 541 962020, fax: +49 541 9620222; or via e-mail: service@kuenker.de. You can access the auction catalogues online at www.kuenker.de. If you want to submit your bid from your computer at home, please remember to register for this service in good time.