Joachim I: The Power-Conscious Elector Who Minted the First Brandenburg Taler

Minting such “new coins” – Moneta Nova is a common part of the inscription on early talers and can also be seen on our piece – was a question of prestige. For the production of talers was by no means profitable, at least it wasn’t in silver-poor Brandenburg – that’s why they stopped minting them as early as in 1522. The ruler who commissioned this coin was Elector Joachim I (1484-1535). The taler shows his bearded head-and-shoulder portrait. This was another novelty for the Margraviate of Brandenburg: it is the first Brandenburg coin featuring the portrait of an elector!

But who was Joachim I? 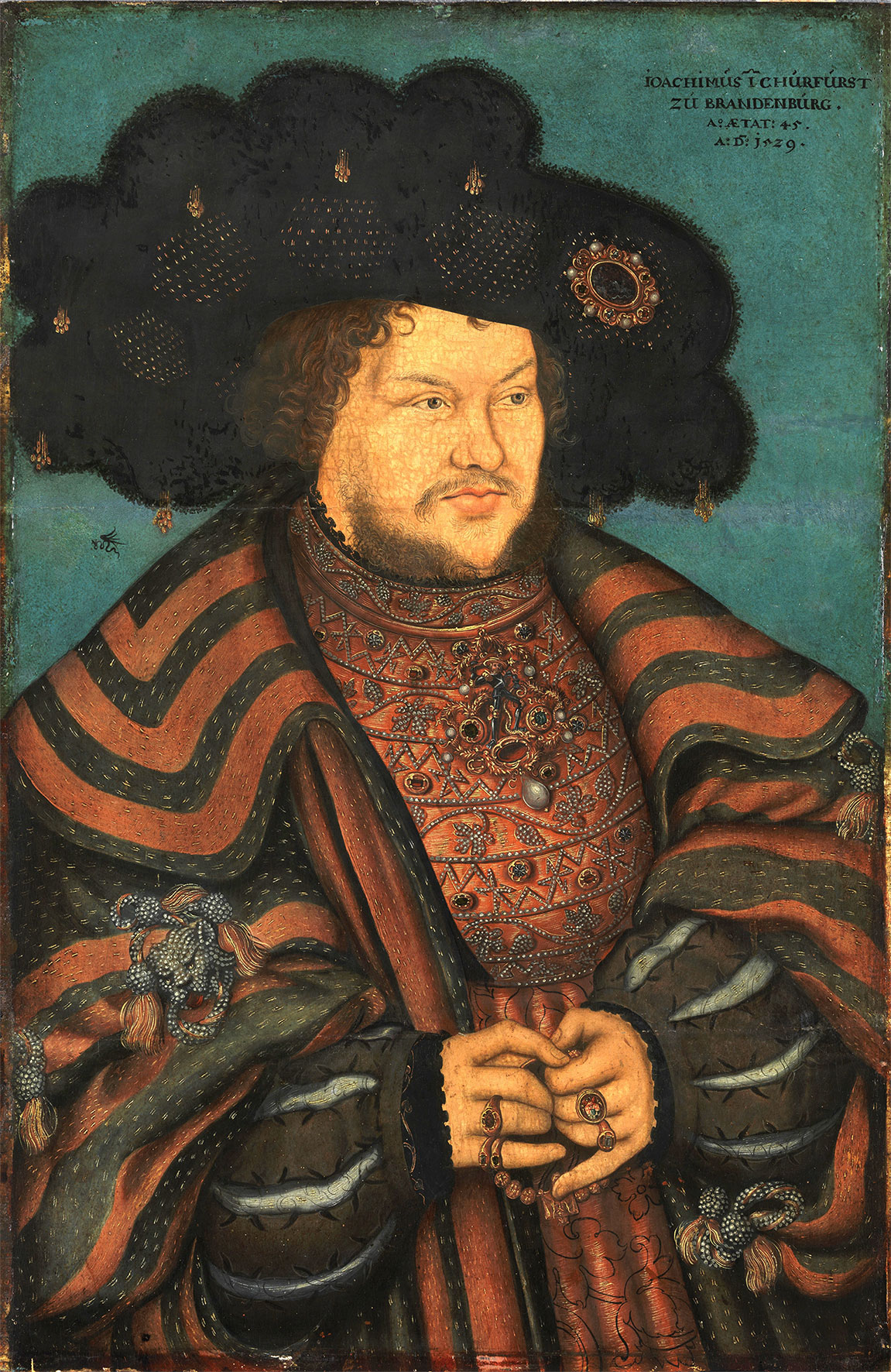 Joachim I in magnificent clothing, painted by Lucas Cranach the Elder.

A Power-Conscious Elector from the House of Hohenzollern

Elector Joachim I was a man of ambition. After the death of his father, he took over the rule at the age of only 15, initially together with his younger brother and under guardianship. He founded the University of Frankfurt an der Oder and fought robber barony in Brandenburg in order to strengthen his position with regard to the local nobility. Due to the eloquence, which he displayed in the assembly of the electors, Brandenburg-Prussian history gave him the epithet “Nestor” as a reference to Agamemnon’s wise advisor. However, we should not read too much into it as it was a family tradition of early Hohenzollern rulers to have a classical epithet: the grand-father was called Achilles, the father Cicero and Joachim’s own son Hector – at least that’s helpful for coin collectors to remember whether the person was more distinguished by military success or their oratory skills.

The Scepter Bearer of the Empire

Self-confidently, Joachim put his own portrait on the obverse of the first taler, as mentioned above, the first portrait on a Brandenburg coin. His clothing immediately alludes to the fact that he was one of the most powerful electors of the Holy Roman Empire: the elector’s cloak trimmed with ermine and the coronet identify him as one of the seven electors entitled to elect the emperor. In his hand he has a scepter, which can be seen once more on the coin, in the center of the coat of arms on the reverse. If you believe the scepter to be the random attribute of a ruler, you are wrong.

It is the imperial scepter of the emperor, one of the imperial insignia. As Arch-Chamberlain of the Holy Roman Empire, the Margrave of Brandenburg had always had the privilege of bearing the imperial scepter at the coronation of the emperor. This was a source of pride, even though no additional powers were associated with the office. That’s why the golden scepter on a blue background remained part of the Brandenburg coat of arms for centuries, depicted on the breast of the red heraldic eagle.

Even if the office was symbolic, the right to elect the emperor was much more. Prior to the election of the emperor two years before our taler was minted, an unprecedented amount of bribes was paid. The French King Francis I and the member of the House of Habsburg we know as Emperor Charles V competed for the seven votes of the electors. Joachim I had initially developed ambitions for the imperial crown himself. But he was persuaded by Francis I: Francis did not only offer financial incentives but also his daughter’s hand for Joachim’s son and the popular post of imperial regent. Joachim was the last elector willing to vote for Emperor Charles V. A fact that Charles never forgot.

Nevertheless, Joachim I of Brandenburg firmly stood on the side of Charles V in the year in which this taler was minted when it came to condemning Luther, despite the fact that the House of Hohenzollern was later to portray themselves as the patrons of the Protestant Church. And there was a good reason for it... 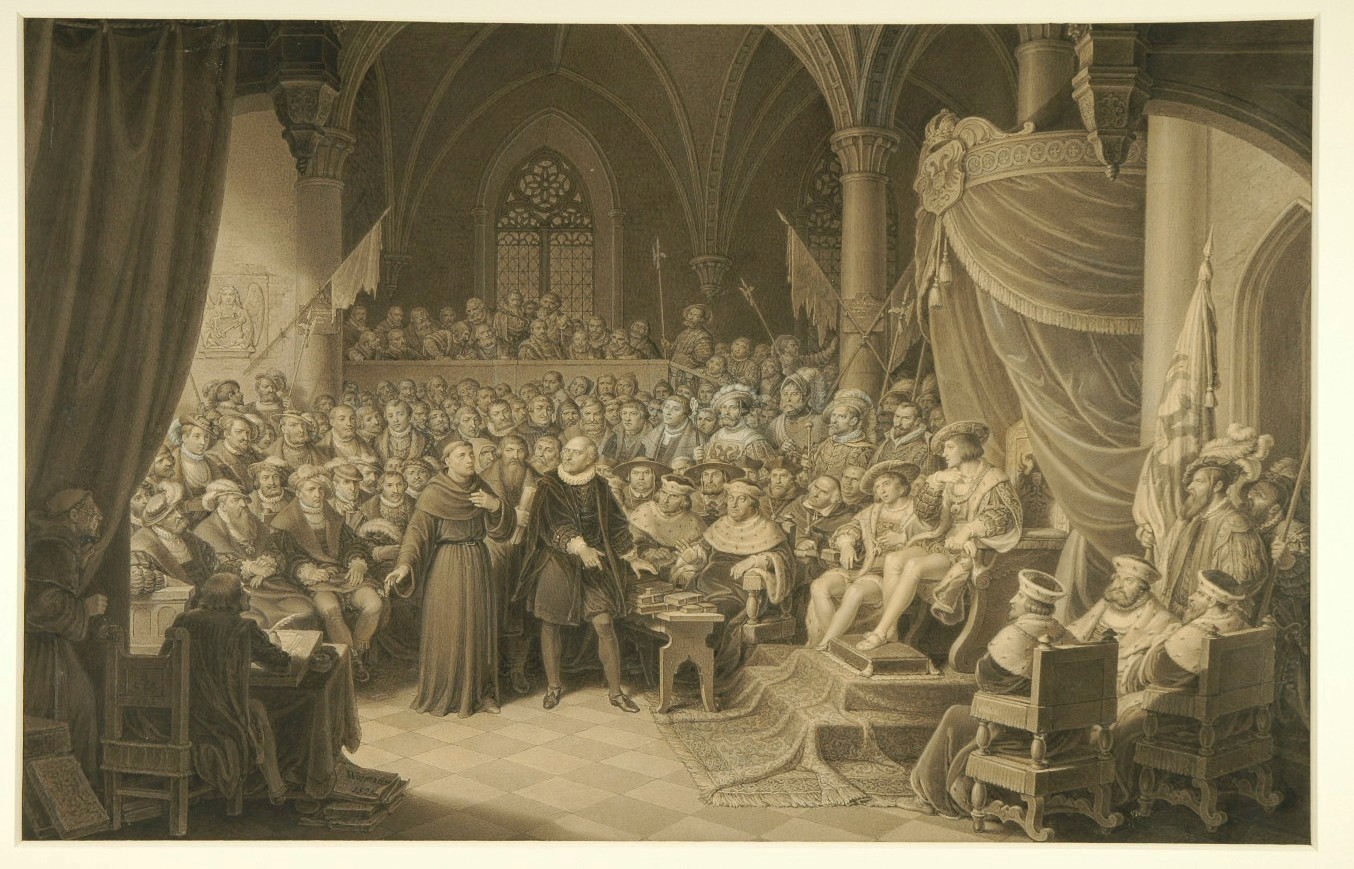 “Here I stand, I can do no other!” At the Diet of Worms in 1521, contrary to expectations, Luther did not recant his writings. Joachim I was present at this famous moment, we see him on this historical depiction of 1853 at the front right below the emperor and, as on the taler, wearing the imperial gown.

An Enemy of Luther

1521 was a year of great historical importance. It was the year in which Luther refused to recant his writings at the Diet of Worms. Being one of the most distinguished electors of the empire, Joachim was obviously present at the history-making Diet. Unlike the Elector of Saxony, who was eventually to give Luther shelter, he was a fierce opponent of the Reformation and advocated to put Luther under the imperial ban. Why? Well, it might have something to do with the fact that it was Joachim’s brother and former co-regent whom Luther had criticized with his theses against the sale of indulgences: Cardinal Albert of Brandenburg, Archbishop of Mainz and Magdeburg.

But let’s get back to our historical taler. It is extremely rare. Only a few specimens of these pieces were minted. Almost all of them were melted down in the following years due to their high silver content. Thus, only a few specimens of the first Brandenburg taler survived – just 23 pieces are known and almost all of them are kept in museums and large collections. Therefore, this auction provides the very rare opportunity to purchase a key piece of early Brandenburg-Prussian history.