The Markstetten Coin Hoard: Witness to a Political Thriller in the High Middle Ages 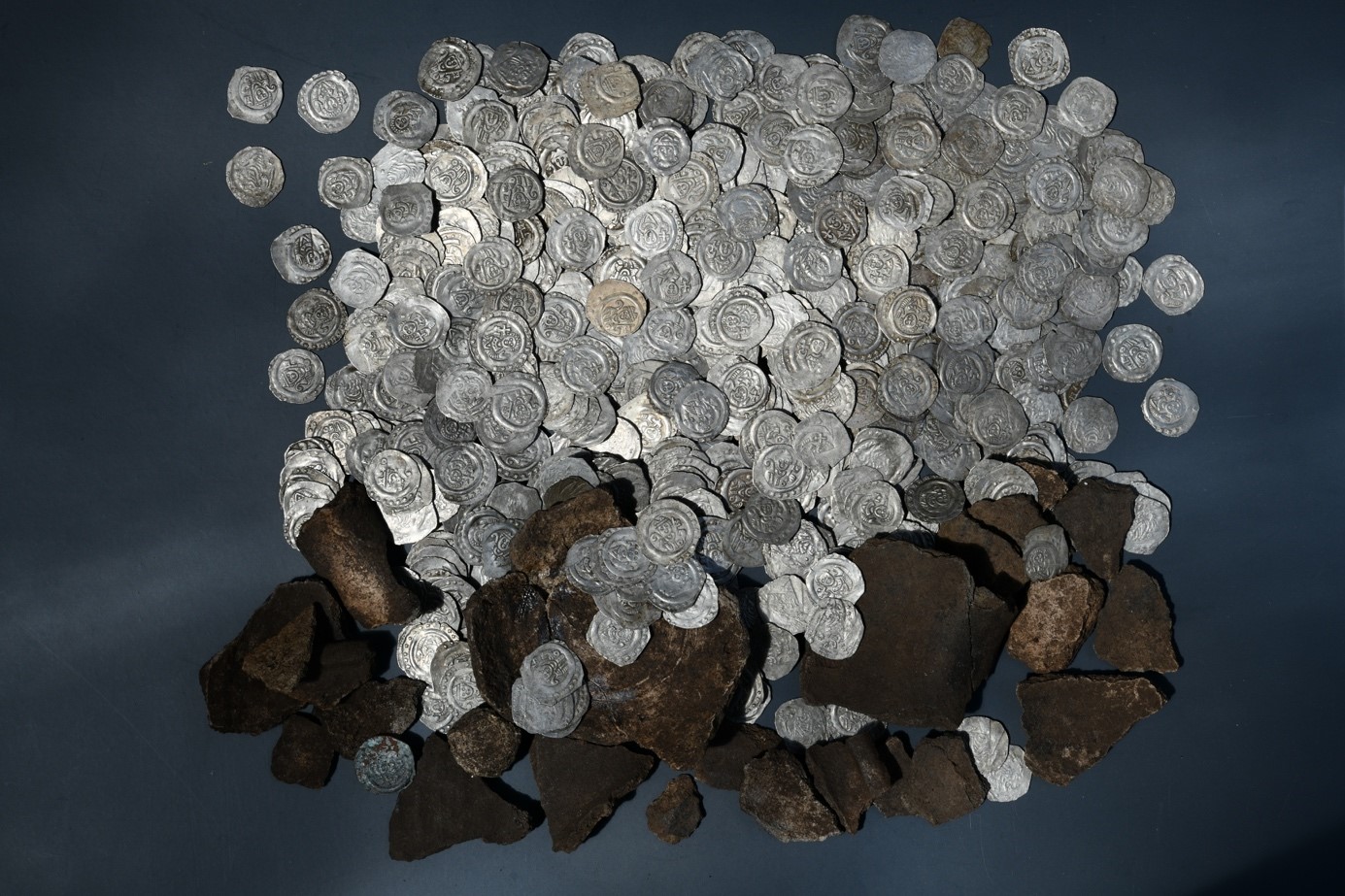 On 18 June 2017, a coin hoard was discovered near Markstetten: at one point after 1228, an unknown person buried a clay vessel, which contained exactly 560 pfennigs. Except for one piece, all pfennigs were minted in Regensburg. At the beginning of the 13th century, the town was not yet the free imperial city as we mainly recall it today, but a powerful bishopric, and several parties tried to control it, including the noble members of the cathedral chapter, rich citizens and the Bavarian duke. 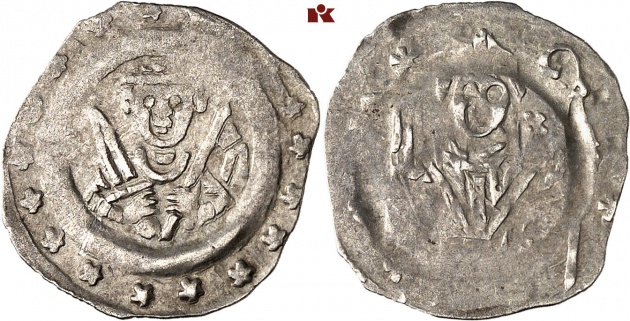 The major part of the Markstetten Coin Hoard consists of two coin types: type “Emmerig 206” with 255 specimens, and type “Emmerig 207” with 292 specimens. Until now, both of them could not be dated more specifically than “around 1225”, an indication that had been laid out by Hubert Emmerig in his work “Der Regensburger Pfennig” published in 1993. Eugen Voronin, who examined the Markstetten Coin Hoard from a numismatic and historical perspective, was able to date the coin types even more precisely. In order to understand his reasoning, we have to recall the political situation in Regensburg.

It would be wrong to assume that there was only one ruler of Regensburg in the late Middle Ages. Quite the opposite: many parties tried to assert their influence in the city. First, there was the cathedral chapter, which consisted of later born sons of noblemen who tried to promote the interests of their families. The cathedral chapter elected the bishop, and the decisive element was not the priestly vocation of the candidate but the power constellation regarding everyday life politics. Which noble family managed to convince enough canons to support them in order to make their candidate succeed?

Next there was the aspiring Regensburg bourgeoisie, which made a lot of money thanks to their famous stone bridge and the Danube river. Another player was the powerful Bavarian duke, who maintained a residence in Regensburg. We should not forget that Munich only became a ducal residence about a generation later.

And being bishop of Regensburg was a very powerful position. How powerful becomes clear when looking at the man responsible for the coin type “Emmerig 173”: Conrad IV, Bishop of Regensburg between 1204 and 1226, was chancellor of the anti-king Philip of Swabia. Frederick II bought Conrad’s support by confirming his unrestricted rule over the city of Regensburg.

When Conrad died on 8 April 1226, the battle for his succession began. 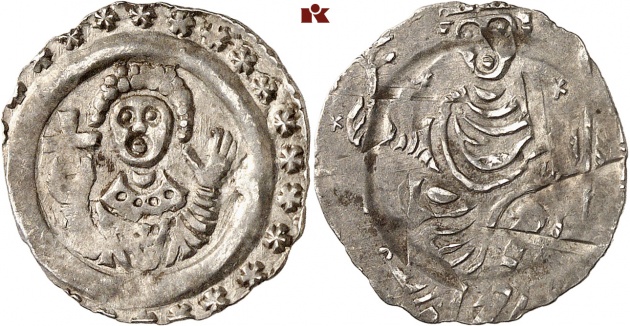 The Bavarian duke made the first move. He was in the city and convinced his supporters at the Regensburg cathedral chapter to elected and immediately enthrone a candidate he liked. He had thus created a fait accompli, with which the majority of the cathedral chapter and the citizens of Regensburg did not agree. Both parties must have feared that the Bavarian duke would be able to significantly increase his influence on Regensburg by collaborating with a bishop who was committed to him. After all, a bishop had to appoint a secular administrator for his possessions. Who he chose for this – a Regensburg patrician, the relative of a canon or a supporter of the duke – was entirely up to him.

The fact that the dispute was indeed about the episcopal fief is confirmed by the remark of an (ecclesiastical) chronicler who spoke of “the old, weak man”, meaning bishop Gottfried, who gave away, loaned out and squandered the episcopal territories. We have to approach this remark with the skepticism it deserves, but we can at least conclude from it that neither Regensburg citizens nor the noblemen of the cathedral chapter agreed with Gottfried’s choice of liegemen. Thus, they jointly sent an envoy to Rome to persuade the Pope himself to intervene in the conflict on their behalf.

And this was quite a promising move because every new bishop had to have his office confirmed in Rome. As long as this did not happen, the bishop was considered an “electus”, elected, but not confirmed bishop. Crosier, ring and miter were only handed over to him when the Church confirmed his office. And if you examine the depiction of the bishop on the coin type “Emmerig 207” very closely, you will notice that these insignia are missing, i.e. that the coin was minted by bishop Gottfried after his election but before the Church confirmed the election. And that never happened. 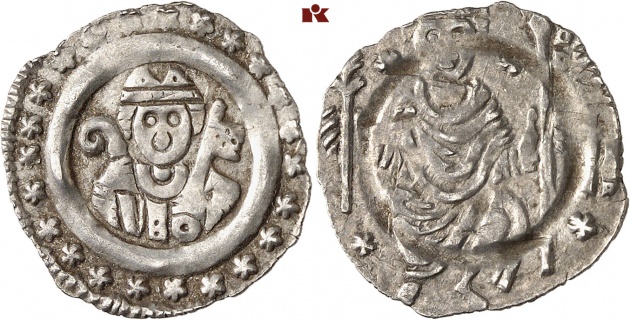 As I said, we are back in 1226, exactly one year before the dispute between Pope Gregory IX and Emperor Frederick II took place. The Regensburg envoy took this into account and presented a candidate who could satisfy both parties: the canon Siegfried, a great-nephew of the powerful archbishop of Mainz, who maintained good relations with both the Emperor and the Pope. Of course, the pope chose the great-nephew of the Mainz archbishop over the candidate of the Bavarian duke. He was quickly elected and anointed as new bishop. On his journey back to Regensburg, Siegfried stopped in Melfi to seek confirmation from Emperor Frederick II.

He returned to Regensburg in the fall of 1227, in full possession of all insignia and with the joint support of the Emperor and the Pope. An ally of the Bavarian duke didn’t stand a chance against him. Thus, Gottfried resigned without a fight and (probably in return) was granted sufficient income by Siegfried to make a living befitting his status.

Bishop Siegfried had new coins minted depicting him with all episcopal insignia of rank: if you look closely, you can see miter and crosier on the coin type “Emmerig 206”. The key that the bishop demonstratively holds in his left hand can be interpreted both as an attribute of the Regensburg diocesan saint St Peter and as a reference to his papal support.

We wouldn’t know any of this if Eugen Voronin, an employee of Künker am Dom, had not scholarly analyzed the hoard. The coin hoard and the coordinates were previously reported to the Bavarian State Coin Collection in Munich and to all responsible institutions, including the Bavarian State Office for Monument Protection, to be examined and scholarly recorded. None of the authorized institutions exercised their right of first refusal, so now that the find has been scholarly recorded and evaluated, it can be offered for sale to the public.

Hubert Ruß, Managing Director of Künker am Dom comments: “It was not only a legal, but also a moral and historical obligation for us to inform the honest finder about the necessary steps and to accompany him through the entire process. In Bavaria, the so-called ‘Hadrian’s Division’ has been applied since centuries. This law goes back to a roman emperor of the middle of the 2nd century AD. It states that the discoverer and the landowner share the hoard, and both are obliged to report it. In addition, the Bavarian state demands that every hoard be scholarly documented for posterity and, if it is a find of special importance, to purchase it. This was not the case with the Markstetten Coin Hoard. However, we decided to offer the find only after it has been scholarly reviewed, and to offer it as one lot hoping that a private or public buyer will preserve it as an ensemble for posterity.”