Our Spring Auction Sales 2021 proved that prices are currently at an all-time high. The total result amounted to €9.3 million, almost double the estimate of €4.8 million. 2,300 bidders from all over the world participated in the auction, many of them live via the internet.

This auction review presents to you the highlights of two very special collections:

We start with the top three coins of Roman Alexandria from the collection of an historian.

Next are the top five from the Tesmer Collection of coins from Brandenburg-Prussia, minted before Prussia was elevated to a kingdom. The realized prices give an idea of what to expect when the second part of this unique collection will be auctioned off in fall.

As always, we end our report with a numismatic treasure that you could have bought for pocket money. For even though six-digit prices sound impressive, the historical importance of a coin does not depend on its price. Collecting coins is fun – regardless of the price segment.

Coins of Roman Alexandria: The Collection of a Historian

Coins from Alexandria certainly are the favorite items of collectors in the field of Roman provincial coinage. The prices that are realized in this field are impressive. Five-digit results are not uncommon.

Thus, among the 325 lots of Alexandrian coinage in Künker’s auction 347 there were nine lots achieving a five-figure result; eleven coins sold for an amount between 5,000 and 10,000 euros. This is exciting because coins of Roman Alexandria aren’t something that might be of interest to investors: they are not attractive enough, and to appreciate their true importance, profound knowledge is required. That’s why we can assume that all those who submitted bids for Alexandrian coins were collectors. Nevertheless, prices skyrocketed, indicating that the strength of the numismatic market is not only due to investors but to a large base of collectors. 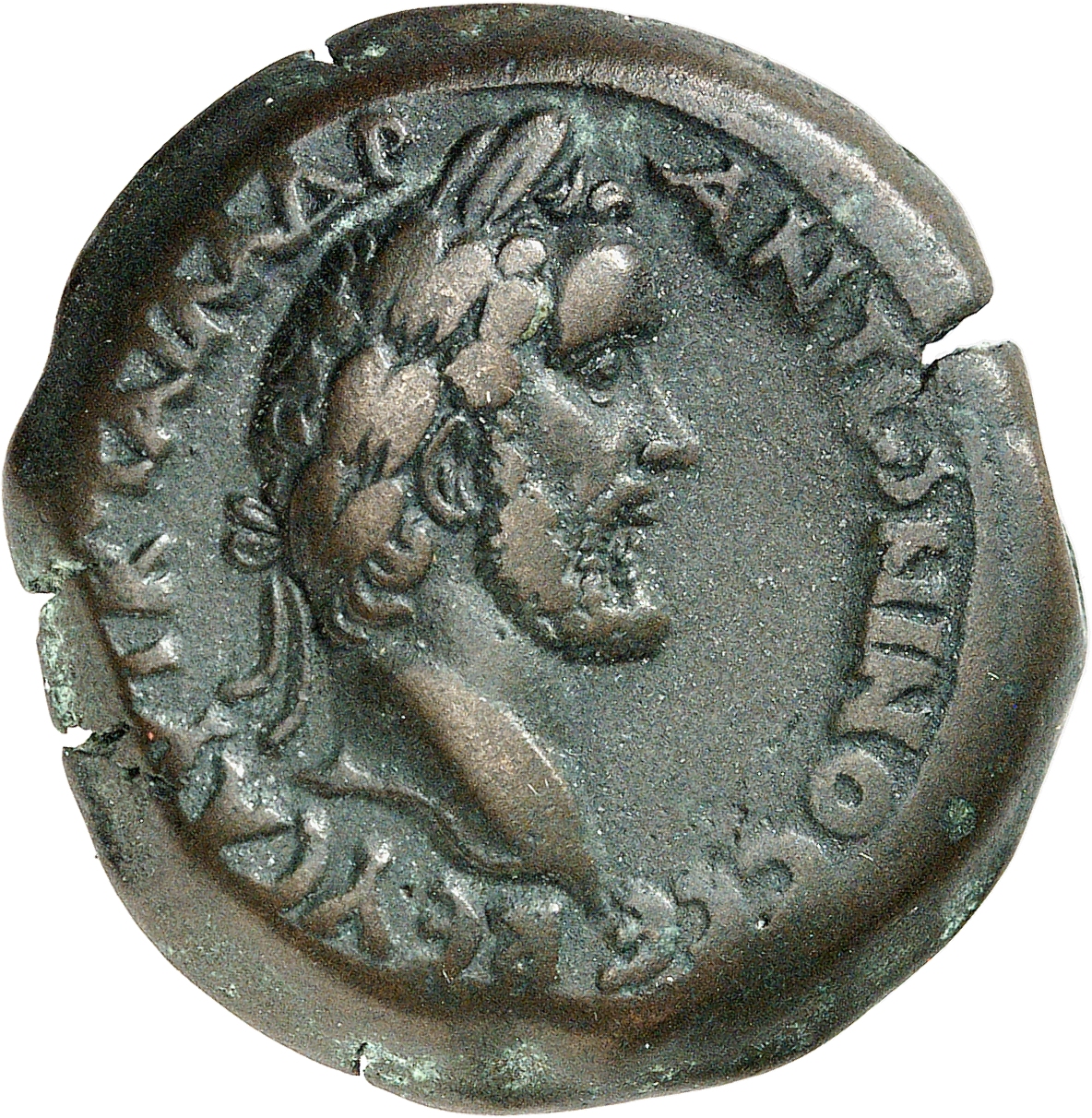 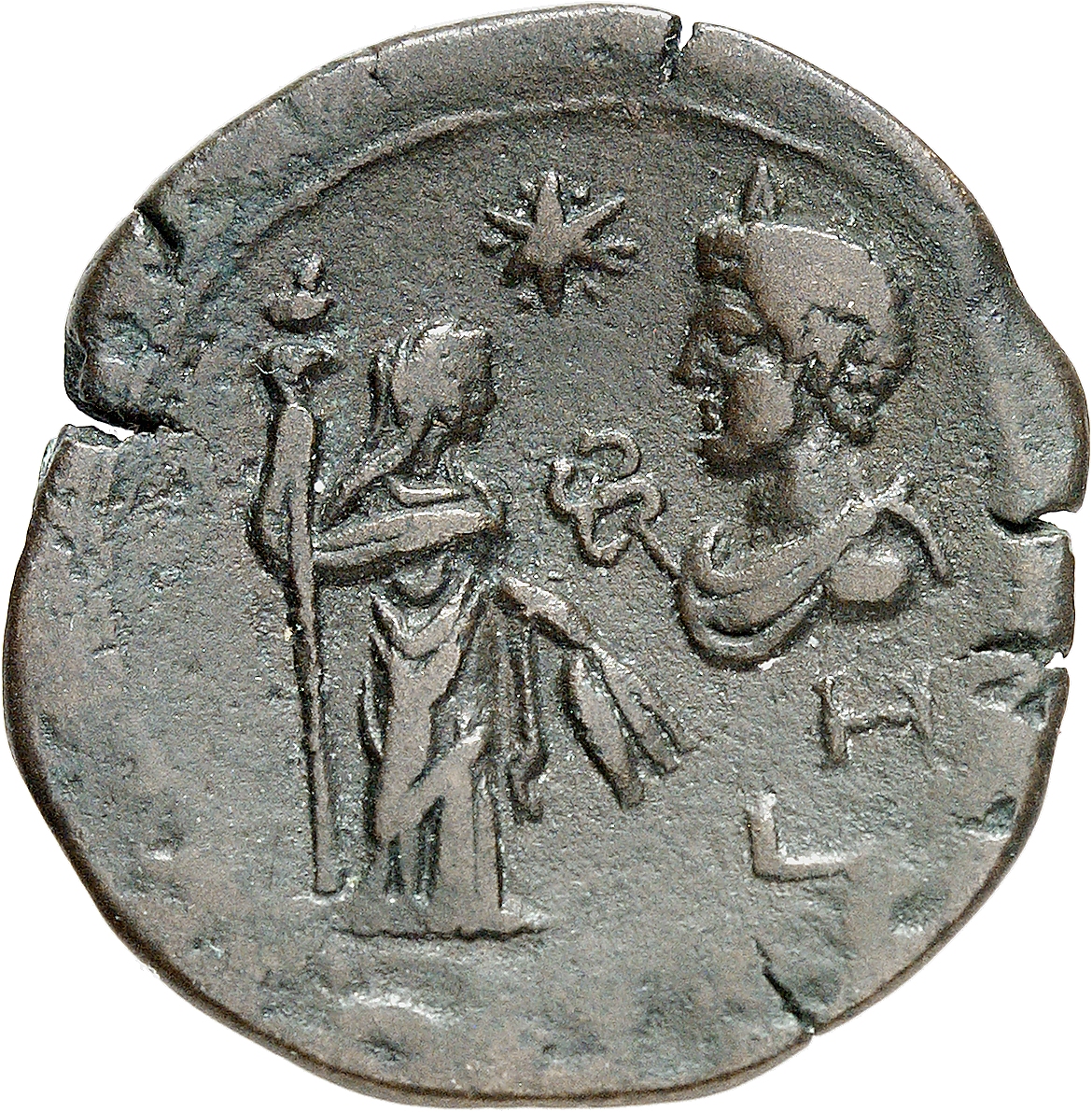 By the way, prior to the Künker auction, the most expensive coin from the astronomical series was a drachm “Aquarius with ascendant Saturn”, which was sold in 2018 for $13,000, i.e. almost 11,000 euros. 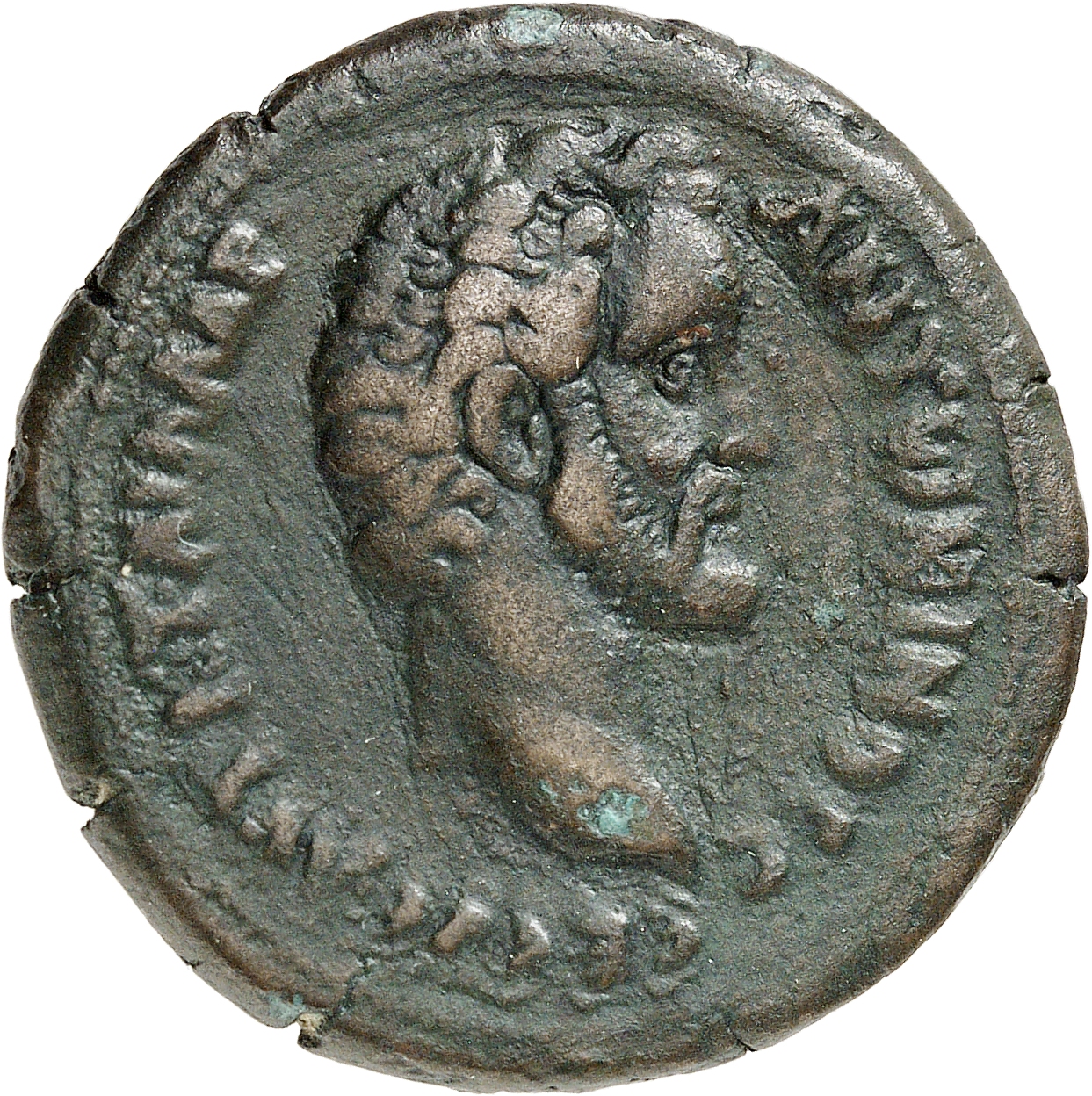 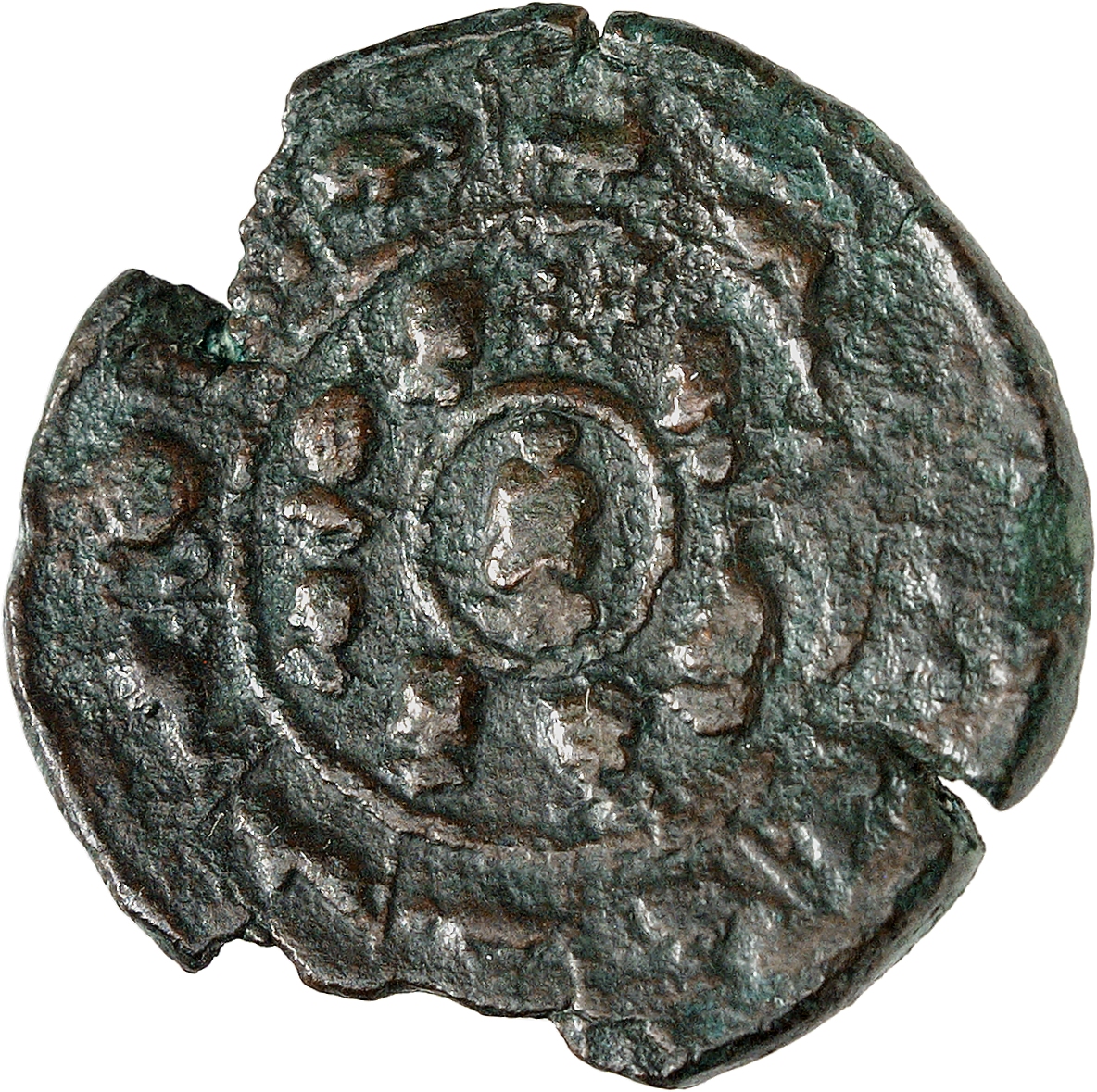 A drachm of Antoninus Pius depicting the entire zodiac on its reverse achieved 22,000 euros. In the center of the depiction are the busts of Helios and Selene, recalling the dualism of the Egyptian calendar. In Egypt, the civil calendar was calculated according to solar years, the religious calendar according to lunar years. When both calendars coincided again after 1460 years, one Sothic period ended. This event took place under the rule of Antoninus Pius, not in the year in which this impressive coin was minted but on 19 July 139, i.e. at the beginning of the second year of the reign of this ruler.

The festival was celebrated throughout Egypt with many feasts and ceremonies. This may have led to many Egyptians becoming interested in astronomy and astrology. At the time of Antoninus Pius, Claudius Ptolemy, a mathematician, astronomer and geographer, was researching this subject at the Museion of Alexandria. We know this scholar most of all because his world view was considered valid throughout the entire western world until Galileo Galilei shook it. However, Claudius Ptolemy did not only come up with the idea of celestial bodies orbiting the Earth on concentric crystalline spheres. He was the first to have the idea of basing the horoscope not exclusively on zodiac constellations but also on the ascendant.

So his calculations might have been the inspiration for the motifs featured on the astronomical-astrological series of Antoninus Pius. 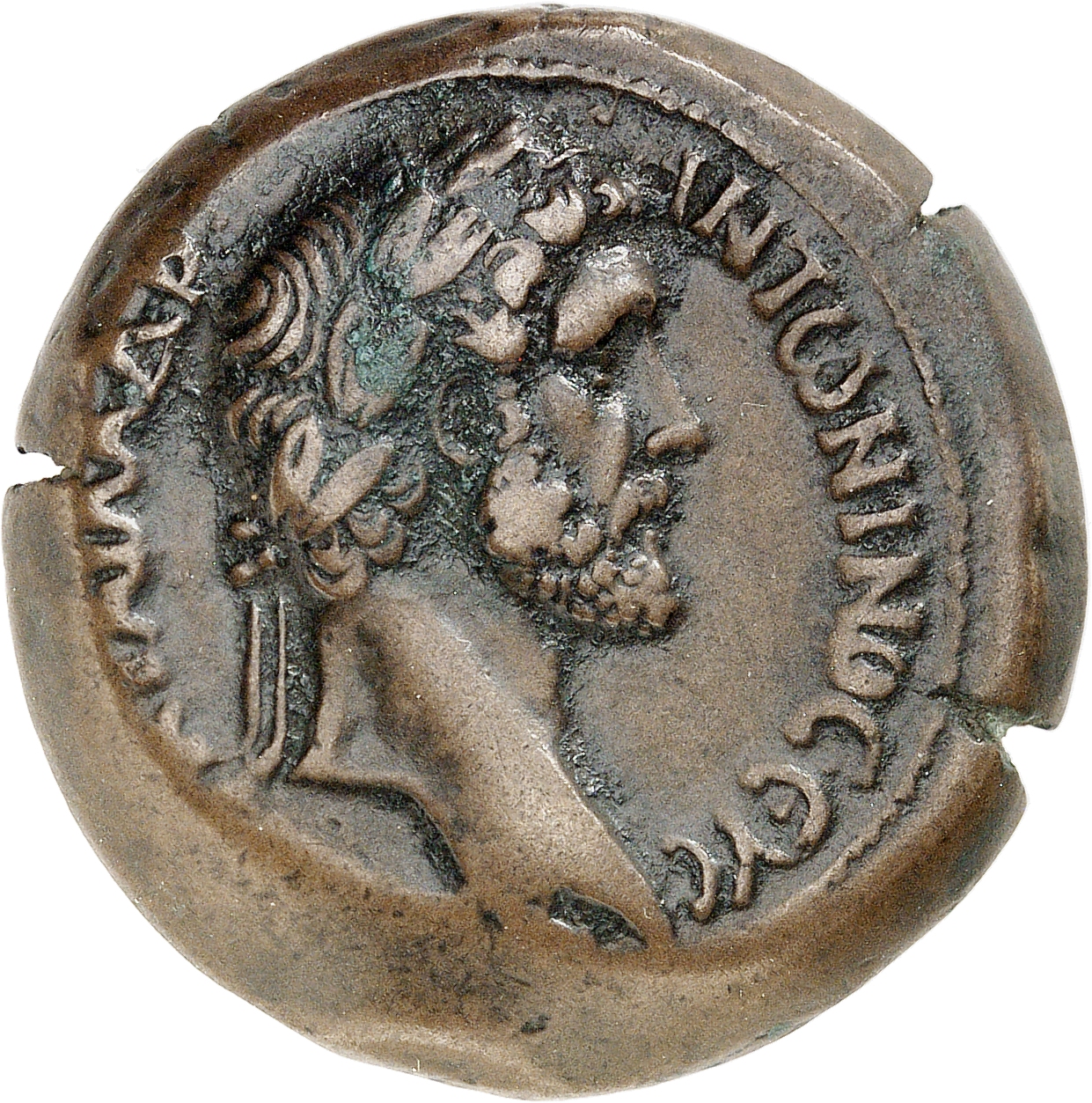 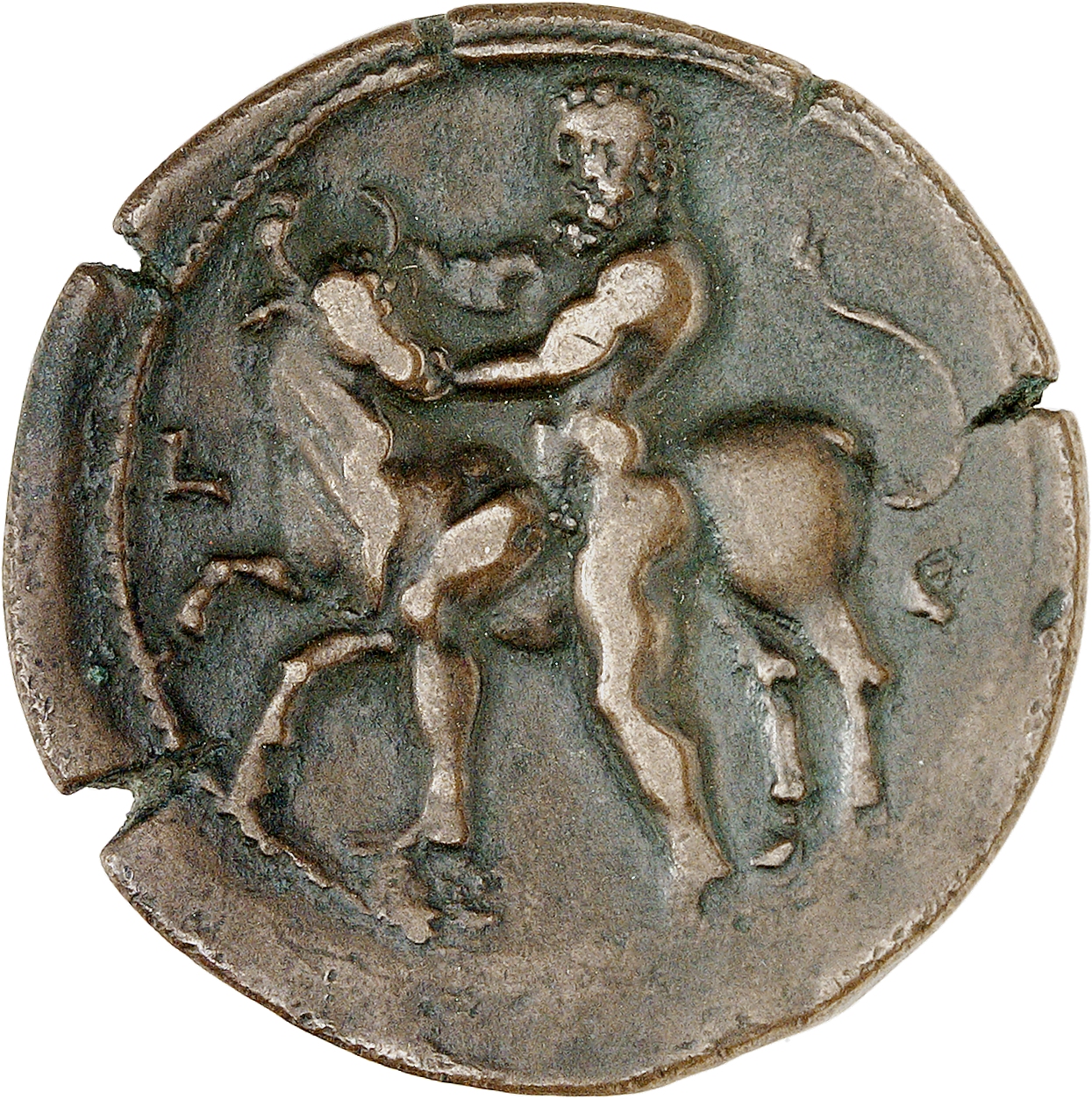 The most expensive coin of the collection, and thus the third most expensive Alexandrian coin ever sold at auction, was a drachm with a hammer price of 38,000 euros featuring the victory of Heracles over the Cretan Bull on the reverse. It was minted under Antoninus Pius and belongs to the series that glorifies the labors of Heracles.

The series isn’t a reference to the Heracles myth. It is mere propaganda of the ruler. Heracles was regarded as the epitome of an unselfish fighter for the good of humanity. The myth of Heracles at the crossroads was widespread in Roman times. It tells how Heracles decides against a comfortable but inglorious life to pursue a strenuous life that mankind will remember for a long time. This myth was used as a parable for the hard life of a ruler until the Baroque era. Whereas this sounds like mockery in view of the life of luxury that some Baroque princes led, it certainly applied quite well to the situation of Antoninus Pius. He had already been a rich man before he came to power and could have spent his life in luxury if Hadrian hadn’t convinced him to be his successor. Being an emperor was an exhausting task for those who were serious about it. This task could well be compared to the labors of Heracles.

Let’s turn our attention to the coins of the Tesmer Collection. Brandenburg-Prussia is currently an extremely popular field of collection, which is reflected in the prices. 60 pieces hit the 10,000 euro mark!

We present the five most expensive pieces of the collection. In the case that two coins achieved the same hammer price, we chose the piece that experienced a greater increase in price compared to its estimate. 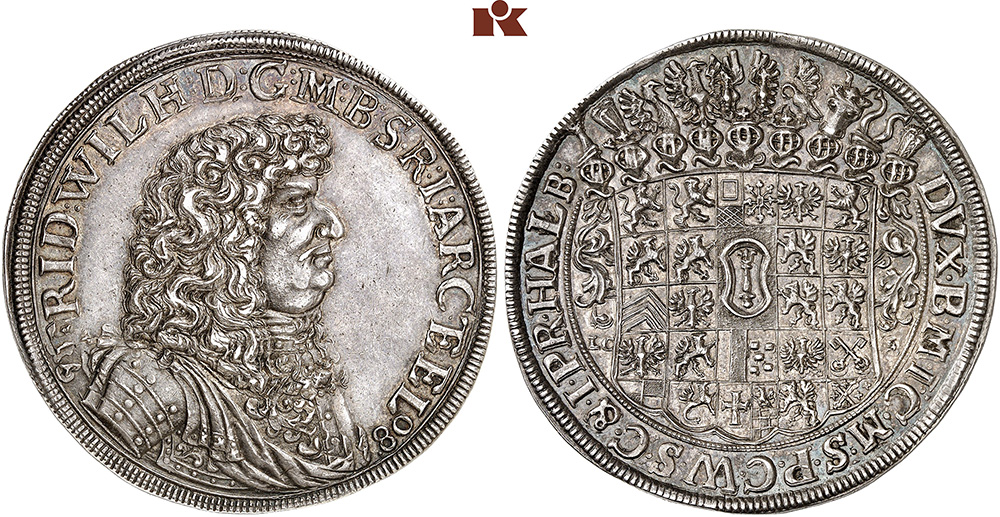 It is the only taler of the Great Elector that was minted in the old episcopal city of Halberstadt. The prince-bishopric was permanently secularized with the Peace of Westphalia and annexed to the Electorate of Brandenburg. The Prussian ruler used the right to mint coins of Halberstadt for his own purposes. However, he only commissioned a single issue of talers. One specimen of this issue changed hands at a hammer price of 44,000 euros and became the fifth most expensive piece of the collection. The obverse features a splendid baroque portrait of the Elector. 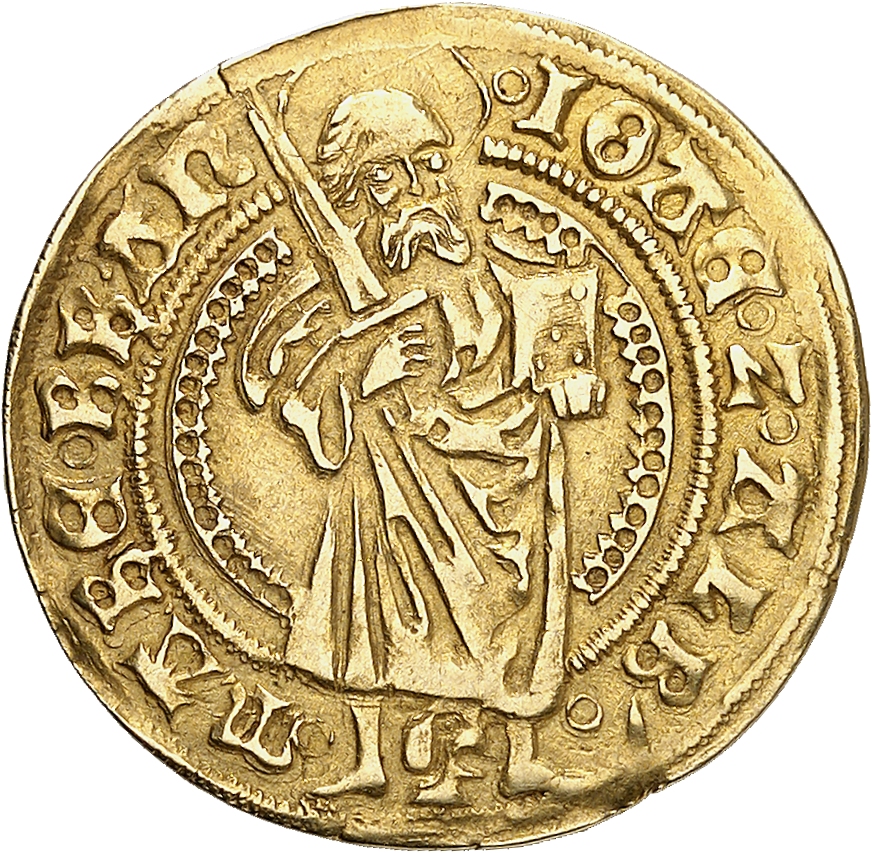 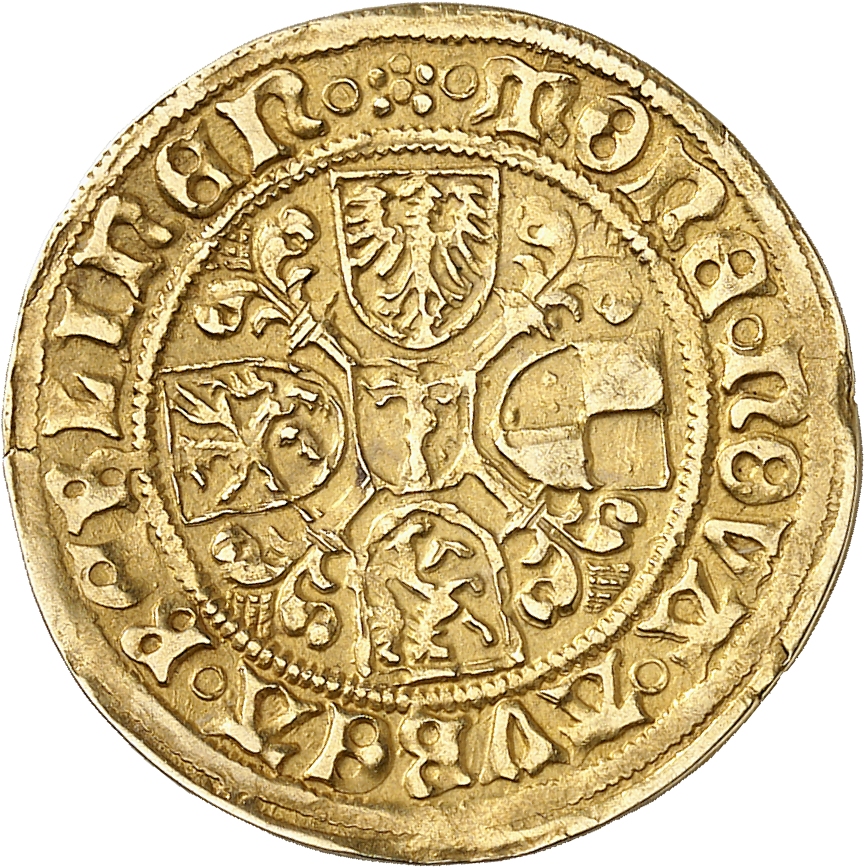 The first gold coin struck in Berlin, which is also the first gold coin of the Electorate of Brandenburg, jumped from an estimate of 20,000 euros to a hammer price of 55,000 euros. The undated gold gulden was minted during the joint rule of Joachim I. Nestor and his brother Albert in the years between 1499 and 1514. The piece is not only extremely rare and of great importance for monetary history, it is also reminiscent of two princes who played an important role in the dispute regarding Martin Luther. Albert, who resigned from the regency in 1513 to pursue a career in the Church, is the ecclesiastical prince whom Luther attacked with his 95 theses. That’s why his brother Joachim Nestor continued to be a bitter opponent of the Reformation. 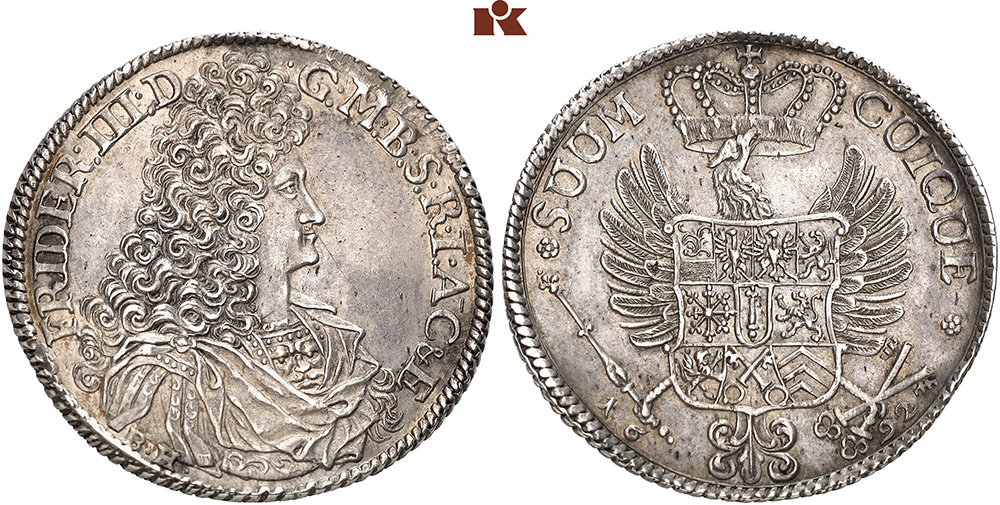 Suum cuique – to each their own – is written on the half reichstaler minted in 1692 by the Minden mint. Its provenance can be traced back to the Klaus Marowsky Collection; the piece is so rare that Marowsky, as he told himself, cancelled a holiday trip in 1957 – the year in which he purchased the coin – to be able to afford it. The Prussian eagle holds the keys of Minden in its fangs, an indication to the mint.

This extremely fine piece had an estimate of 15,000 euros. It realized a hammer price of 55,000 euros. The reason for this is probably that the piece is incredibly rare: it’s the second known specimen. 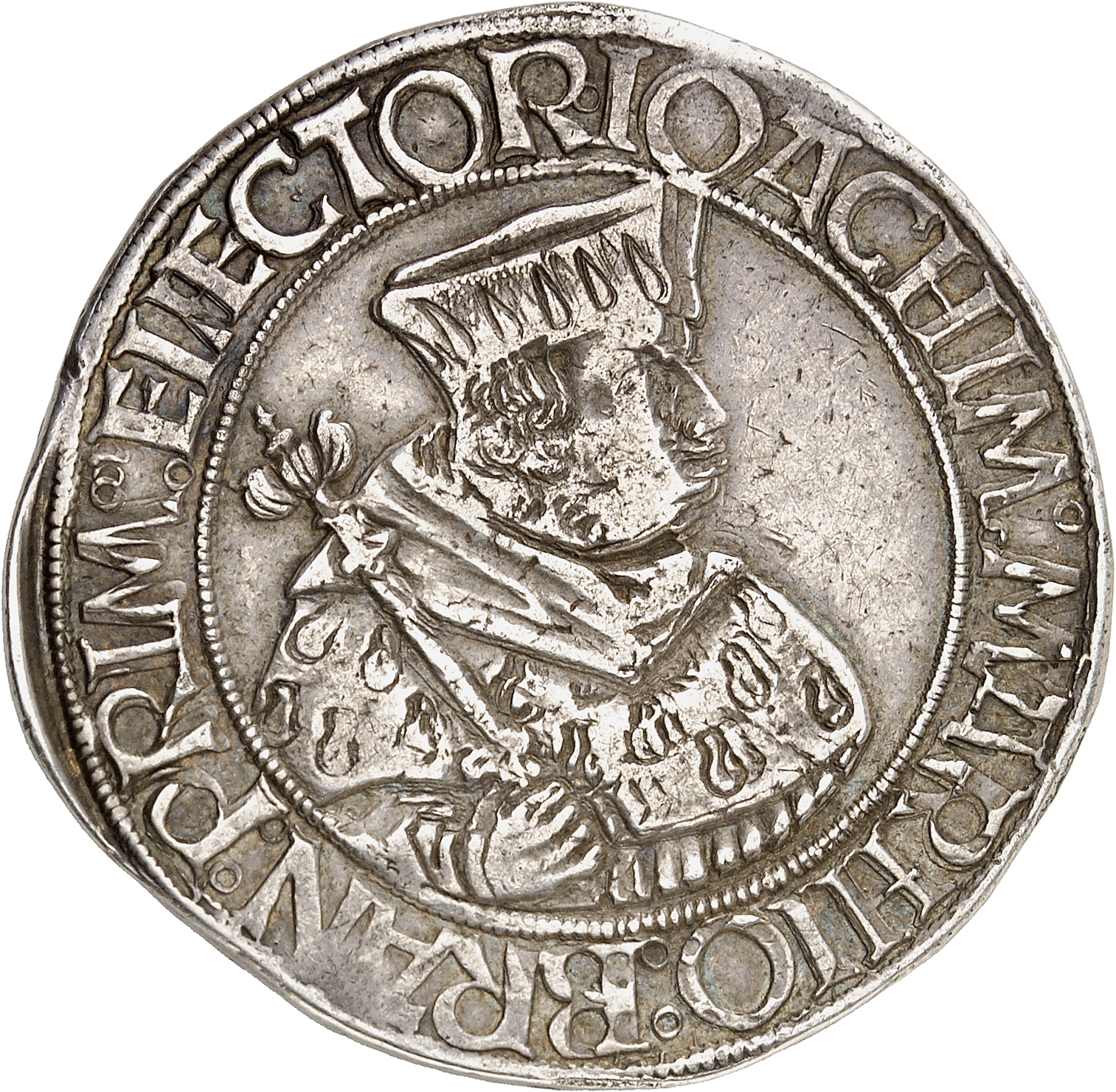 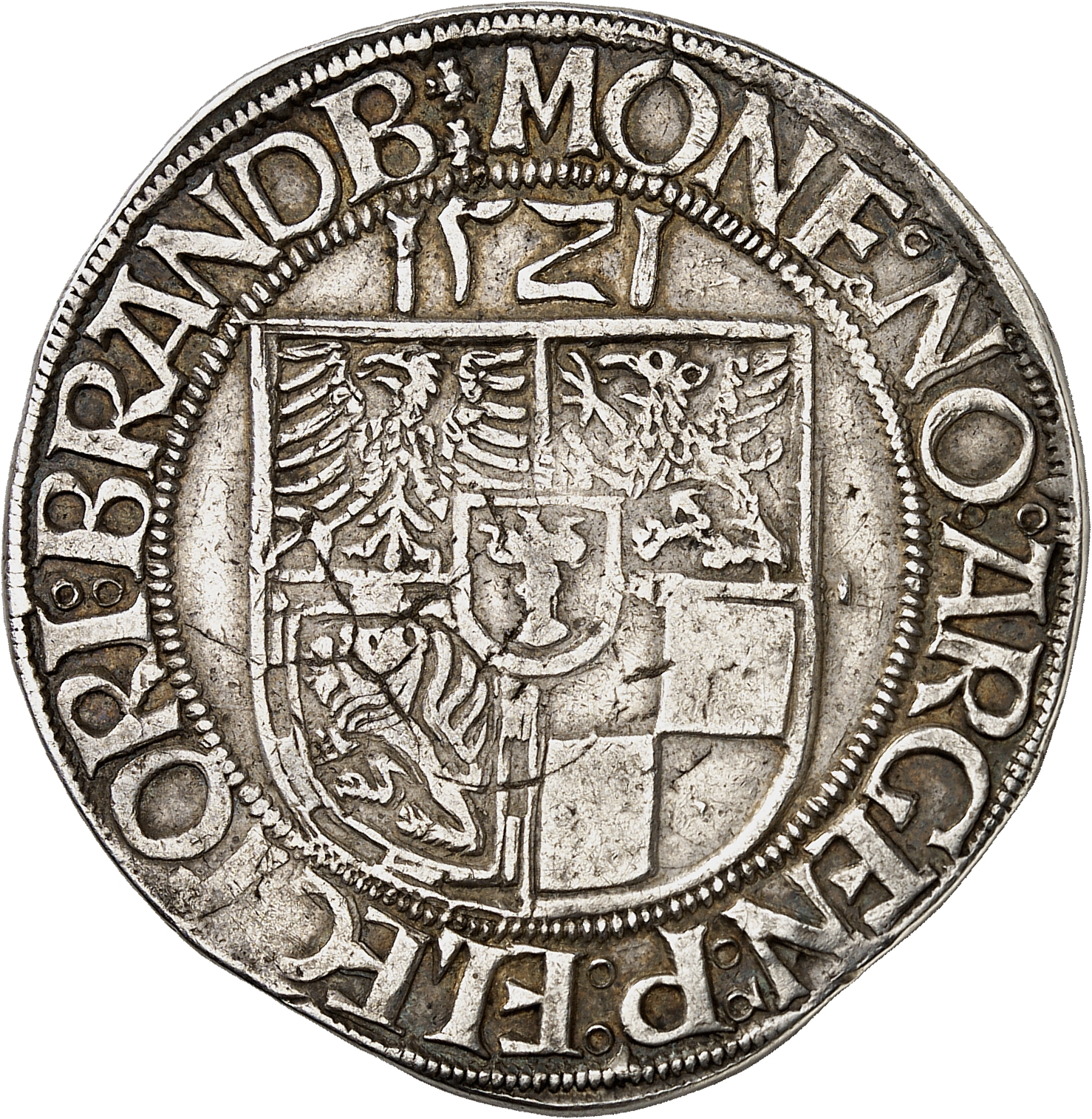 The first Brandenburg taler: it was obviously one of the most sought-after coins of the auction. Its price increased from an estimate of 50,000 euros to a hammer price of impressive 130,000 euros. And rightly so: only 23 specimens of this issue have survived to this day. Most of them are kept in museums which is why only very few specimens are available on the market.

The coin bears testimony to the great ambitions of Joachim I. called Nestor for his electorate. He, too, wanted a prestigious silver coin in the form of a taler in order to show off how important he was. To this end, the ruler was the first in the history of Brandenburg to feature his own portrait on a coin.

1521 was a year of great historical importance. In 1521 Luther refused to recant his theses at the Diet of Worms. It’s a happy coincidence that Künker was able to offer the first Brandenburg taler, which was minted in that very year, exactly half a millennium after it was minted. 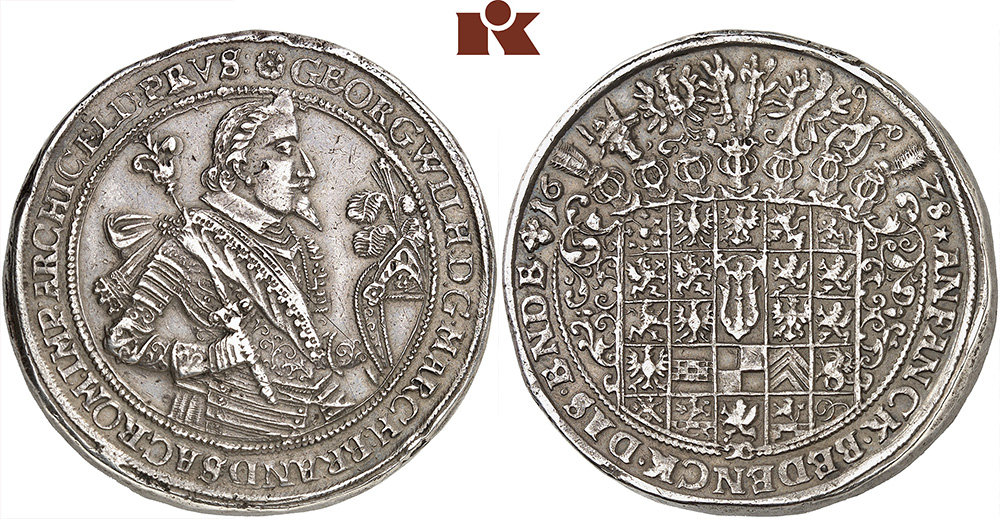 The first place was conquered by a broad quadruple reichstaler minted in 1628 in Königsberg by George William. It is probably the only known piece in private possession. The dies are that of the so-called “Spruchtaler” because the reverse of the coin bears the legend: Anfanck - Bedenck - das - Ende. This German motto is an abbreviated translation of the Latin phrase quidquid agis prudenter agas et respice finem, which translates as: whatever you do, do it with intelligence and with the end in mind. A fitting motto for a coin that was created in the first years of the Thirty Years’ War.

Being a loyal prince to the emperor, the Calvinist George William, who had close family ties to the Protestant side, was caught in the middle of the conflict. He was married to a daughter of Count Palatine Frederick V, the ruler who went down in history as the Winter King. In 1626 he married his sister to the Protestant prince of Transylvania. At that time, Brandenburg already suffered from the invasion of the Danish ruler Christian IV, who did not care about the neutrality George William wanted to maintain.

This quadruple taler is one of the coins that was minted in 1628 to pay the troops and the war contributions imposed by the Danes. One may well wonder to whom the motto that is featured so prominently on this coin was addressed. 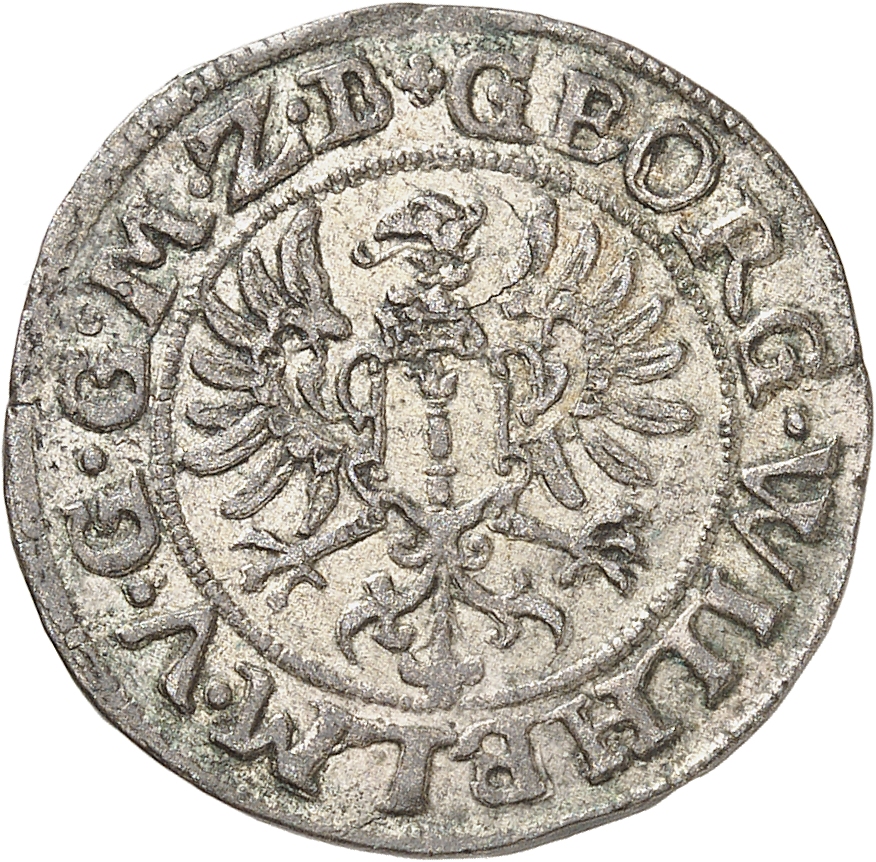 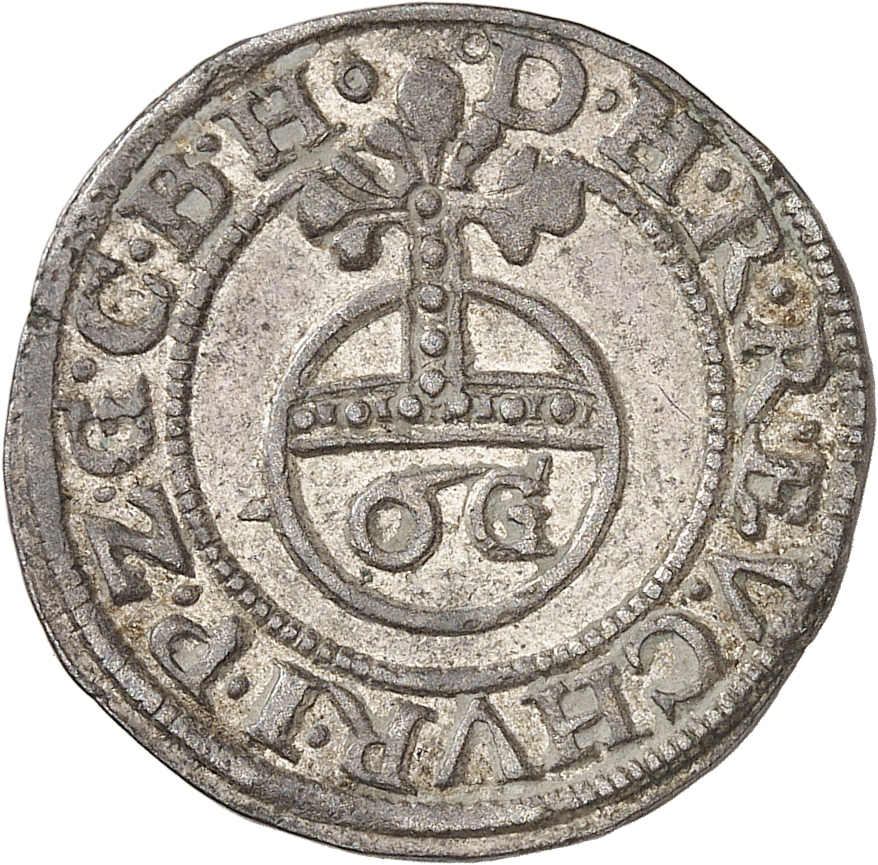 As always, we would like to present an interesting coin that you could have bought for little money. It stems from the same historical context as our most expensive piece; it bears witness to the actions of George William at the beginning of the Thirty Years’ War.

The Brandenburg ruler also joined the exploitation of the population during the financial crisis called “Kipper und Wipper”. Advisers to the emperor had triggered the deterioration of coins that soon became rampant throughout the empire. The emperor procured the money he needed for the war over Bohemia by renting his mints to entrepreneurs for a high advance fee. Those who operated the mints earned their money by constantly lowering the quality of the coins they minted. The fortune of Prince Wallenstein, for example, can be traced back to this form of coin manipulation.

As Gresham’s Law states, bad Kipper and Wipper coins drove out good money. Many princes also began to mint poor coins in order to make profit themselves. One of them was George William. He even founded an additional mint in Krossen for this purpose. This piece was not minted there but in Cöln. Cöln has nothing to do with the city of Cologne, it was a district of Berlin. Cöln was located on the Spree Island, whose northern part is known as the “Museum Island” today. By the way, George William did not only fool his own subjects. He also produced Kipper and Wipper coins that were exported to Mecklenburg and Pomerania.

You want to know what the ruler used the money for he gained with these action? Well, we do not know. Surely, he did not use it to create a standing army. That’s why he could not defend himself when the Danish king used Brandenburg as a deployment area in the war against the emperor.

As I said, a coin like this gets you a lot of history for little money.