The Peace of Augsburg was signed in 1555. The key point of this treaty was the principle that a ruler was allowed to choose the confession of his principality and thus of his subjects. There was only one exception: the ecclesiastical reservation.

If a ruler of an ecclesiastic state abandoned the Catholic faith, he had to resign from office. Whereas the emperor failed to enforce this provision in the Protestant north of the empire – which is why the Catholic Church lost Magdeburg and Bremen, among others, – the situation was different when Gebhard I Truchsess von Waldburg and Archbishop of Cologne decided to convert to the Reformed faith. 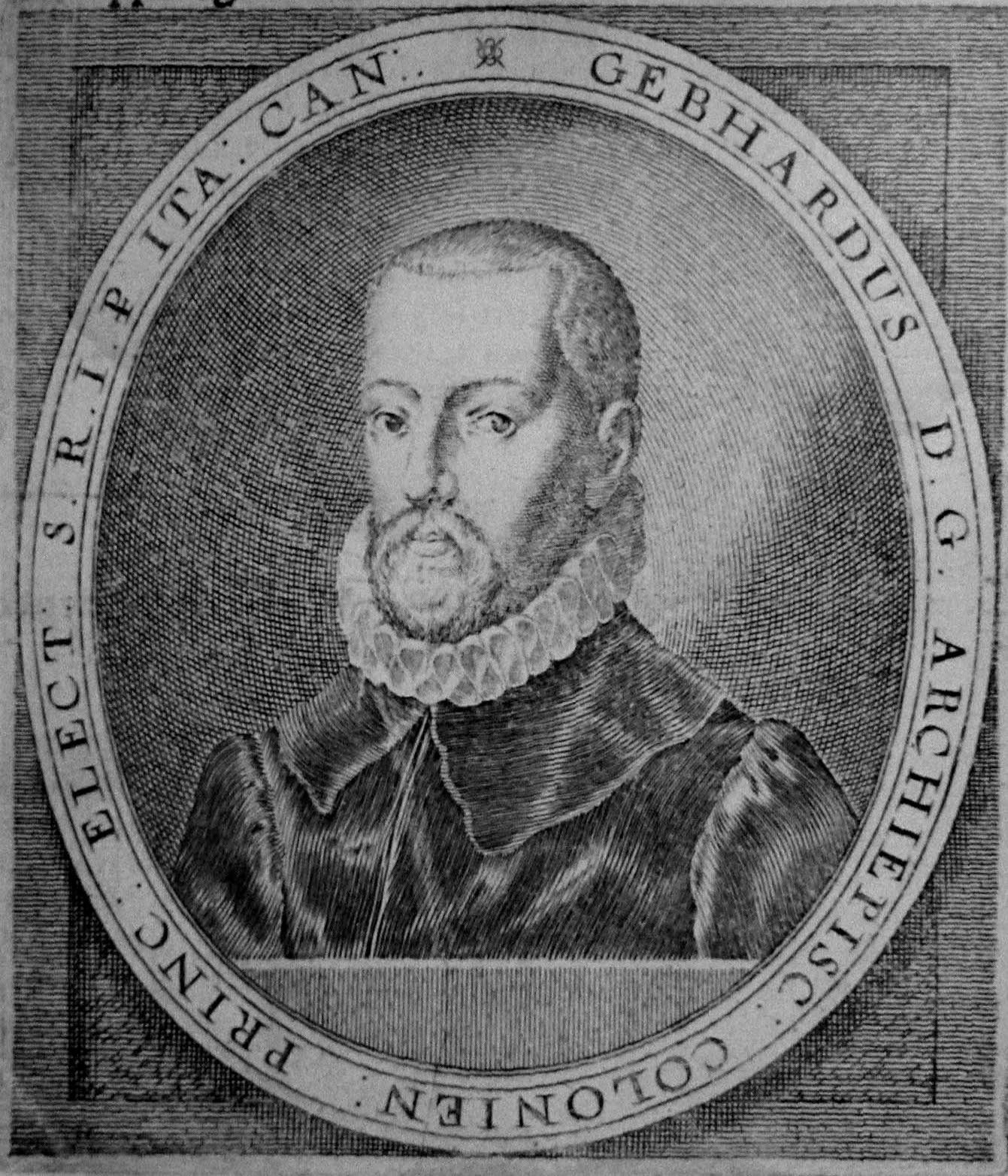 The Background: Gebhard’s Election as Archbishop

On 13 September 1577, the Cologne Archbishop Salentin von Isenburg resigned from his office in order to marry. A central post of the Catholic Church in the Holy Roman Empire was thus left vacant: in fact, the Archbishop of Cologne not only controlled an important territory along the Rhine river, he was also among the princes who elected the emperor. This was of utmost importance because three of the seven electors had already converted to the Protestant faith. Another Protestant elector would have threatened the supremacy of the Catholic Habsburgs.

Thus, the pope and the emperor wanted someone who was as steady in his Catholic faith as possible to be elected Archbishop of Cologne. However, they only had the power to confirm an elected candidate. The choice was made by the Cologne Cathedral Chapter. And this body did not choose Ernest of Bavaria, the son of the Bavarian duke, but Gebhard I von Waldburg, a descendant of a rather mediocre noble family from Swabia. At the time, cathedral chapters preferred a bishop with limited power.

At first, Gebhard seemed to be quite Catholic. He had himself ordained to the priesthood, which had not been a given for an archbishop anymore for a long time because it involved celibacy. By doing so, Gebhard achieved what he needed: he was confirmed by the emperor and the pope.  On 29 March 1580, Gebhard of Cologne became both elected and confirmed Archbishop of Cologne. 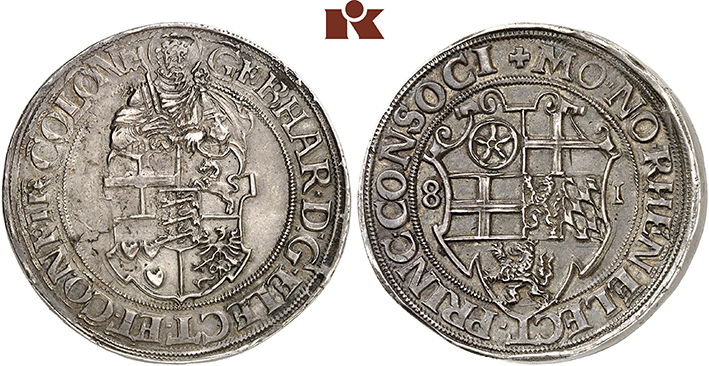 A Unique Testimony to Gebhard’s Confirmation as Archbishop

An extremely rare 2 1/2fold thick taler, which is offered by Künker in its anniversary auction 350 with an estimate of 100,000, is reminiscent of this: the translation of the legend on the obverse reads: Gebhard, by the Grace of God Elected and Confirmed [Archbishop] of Cologne. The depiction is quite usual for such a specimen: we can see the personal coat of arms of the bishop with the small coat of arms of the Waldburg family in the center, above it St. Peter with the key. St. Peter is still the patron saint of Cologne Cathedral today.

The reverse reminds us of the fact that the Rhenish electors still coordinated their monetary policy in the 16th century. The translation of the inscription reads: New Coin of the Coinage Union of the Rhenish Electors. The coat of arms on the reverse consists of the coats of arms of all those who participated in the coinage union.

We should be aware that it was not usual to issue talers every year in the 16th century. Talers were only minted when they were needed. And Gebhard needed them in 1578 to celebrate the fact that the emperor granted him his fief, in 1581 to celebrate him being confirmed by the pope – and in 1582 and 1583 when he had to buy soldiers and allies during the war. 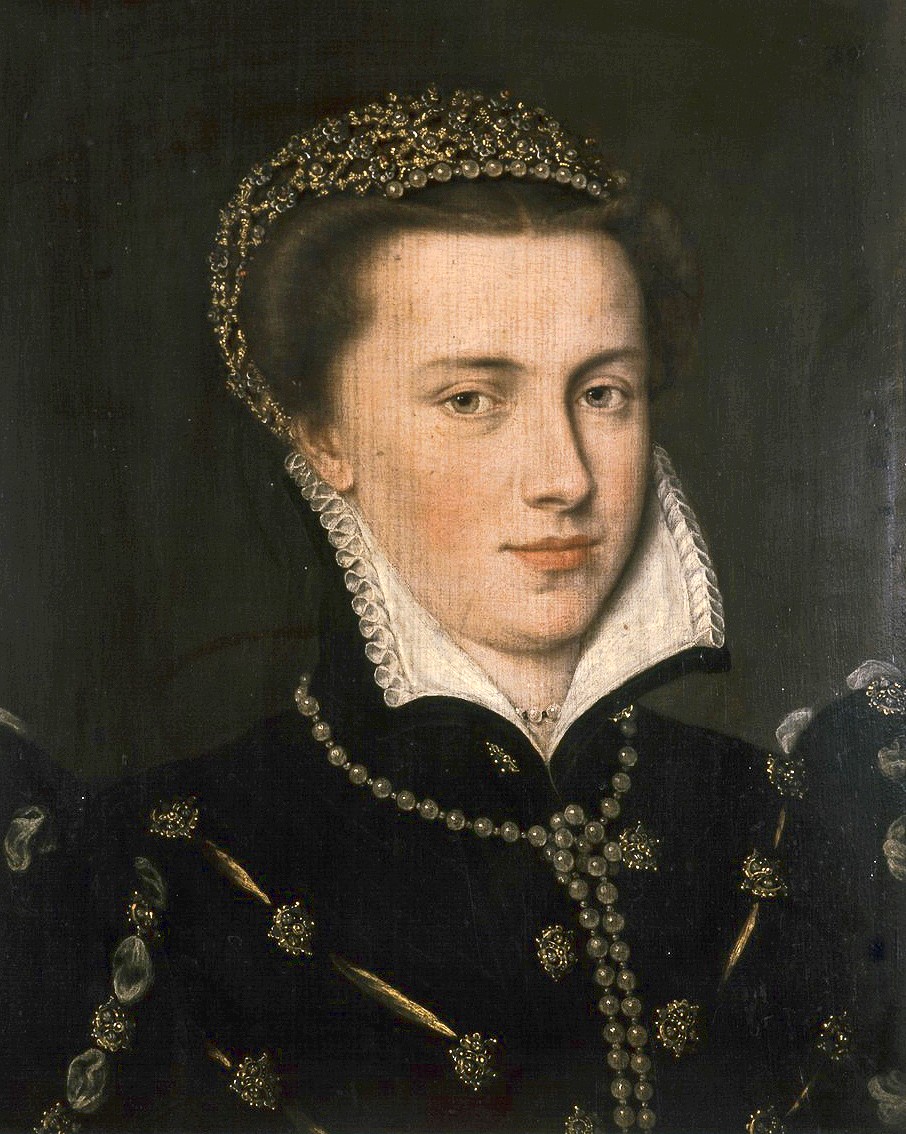 The Archbishop Who Fell in Love

At some point between 1579 and 1580, Gebhard fell in love with the daughter of a Protestant count, Agnes von Mansfeld who was known as the beauty of Mansfeld. The Mansfelds were not just any count’s family. They were among the most prominent supporters of the Reformation and had the financial means to provide active help. They owned profitable silver mines in the southern Harz. For Gebhard, this meant that there was not just a beautiful woman waiting for him. Due to her relatives, he got the opportunity to turn his ecclesiastical into a personal principality, as the Hohenzoller Gotthard Kettler had done before him with the State of the Teutonic Order. This might have convinced him.

Thus, Gebhard converted on 19 December 1582 to the Reformed faith, triggering a war. 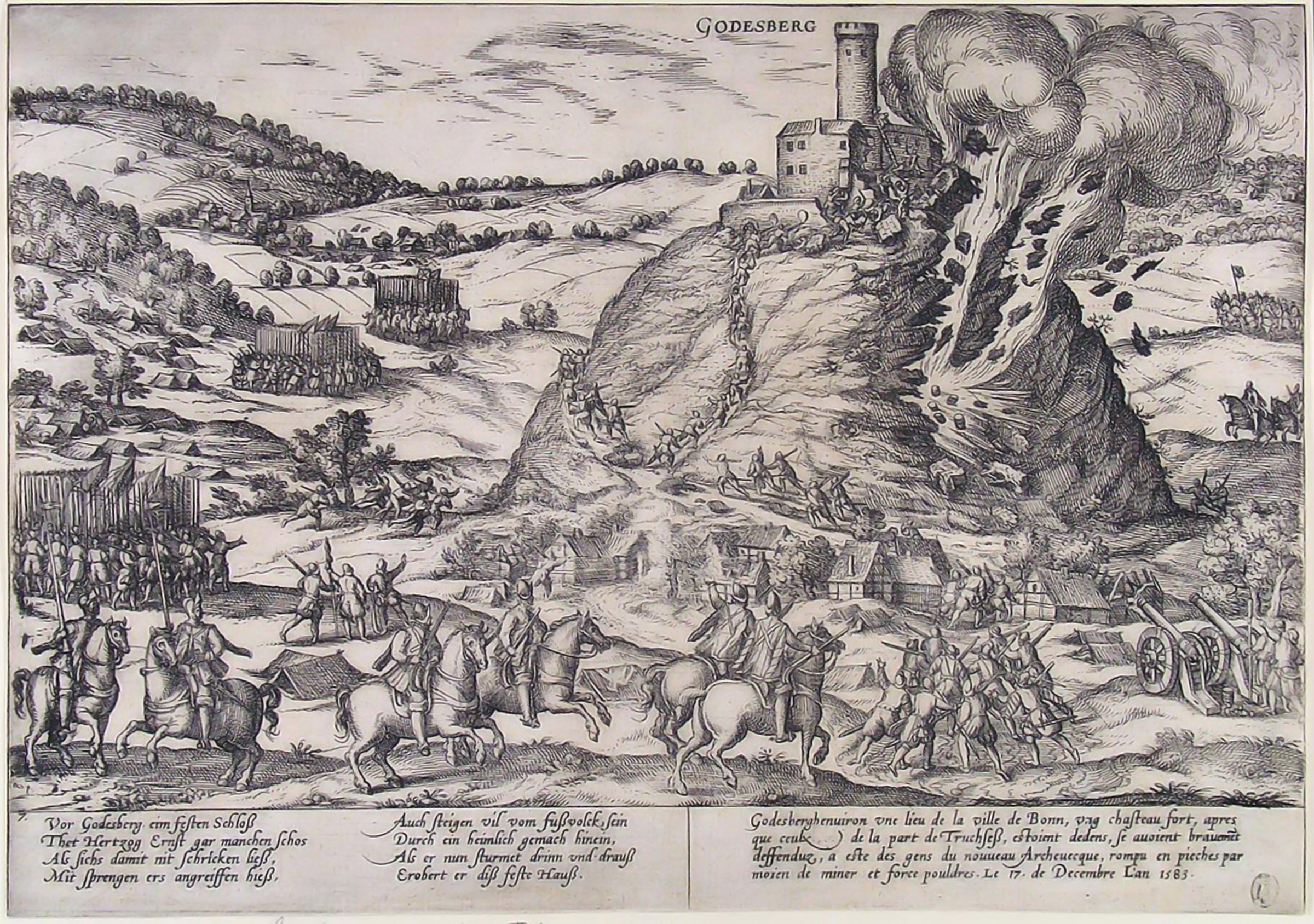 The destruction of the Godesburg in the Cologne War.

Of course, the emperor did not put up with this violation of the ecclesiastical reservation. His rule was at stake. The former competitor for the office, Ernest of Bavaria, became the figurehead of the Catholic side. The Cologne Cathedral Chapter officially elected him on 23 May 1583 and asked Bavaria and Spain for military help.

Gebhard found supporters, too, but his conversion to the Reformed faith had been a mistake. At the time, Reformed-Calvinist Christians were considered extremists. Therefore many moderate Protestants did not want to support him. That may be one the reasons why Gebhard was not able to find as many allies as his competitor, Ernest of Bavaria. There was no question about who was to win the war. The conflict ended with the conquest of the city of Rheinberg in February 1590. 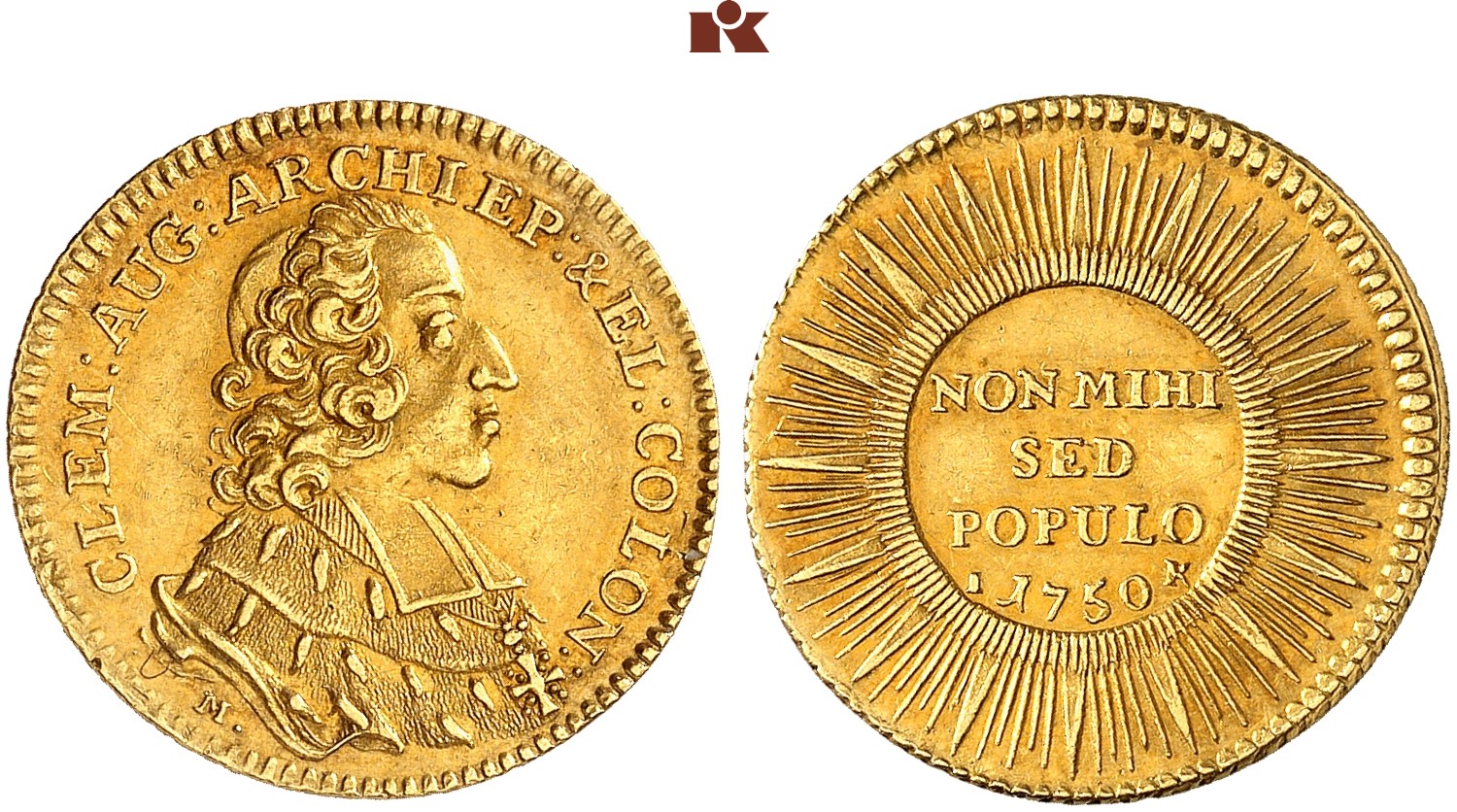 Gebhard von Waldburg fled to Strasbourg, where Protestants and Catholics were also fighting for the office of the bishop. He died there as early as in 1601. His wife Agnes found refuge with the Dukes of Württemberg and lived there until she died in 1637. Ernest of Bavaria became Archbishop of Cologne, and of Freising, Hildesheim, Liège and Münster. He thus was one of the powerful ecclesiastical princes the Council of Trent had wanted to avoid. He laid the foundation for the Cologne archbishopric to become a Bavarian secundogenitur. The reign of the last archbishop from the Wittelsbach dynasty ended in 1761.

By the way, the new Archbishop Ernest of Bavaria obviously had a mistress, too. She bore him two children. Ernest lived with his Gertrud von Plettenberg for many years at Arnsberg Castle. He might have even married her.

You can find all coins of this auction at www.kuenker.de