A New Currency for a New Japan

The fast industrialization of Japan, which started in the years after 1868, did already amaze and impress those who witnessed it at the time. While other Far Eastern countries of the 19th century became more and more dependent on western countries, Japan managed to stay independent while making use of European technology and know-how. The foundations for this development were laid during the Boshin civil war.

The Battle of Toba–Fushimi at the gates of Kyoto. Wood engraving from 1868.

“... So That We Would Not Suffer the Same Fate as India and China”

The Boshin War marked the beginning of the Miji era, i.e. the period between 25 January 1868 and 30 July 1912. The opponents were, on the one side, the supporters of the Tokugawa shogunate, on the other side all those who wanted a strict central government under the rule of young Emperor Mutsuhito. The underlying cause for this military conflict was Japan’s economy: the opening of Japan had triggered a rampant inflation. Every Japanese was affected. Prices had risen by more than 650% on average, and the price of rice, a highly important foodstuff, had increased by as much as 800%.

Above all, educated young people blamed the policies of the Tokugawa shogunate for the economic misery. When Emperor Komei died on 30 January 1867, they hoped for a new beginning under the rule of the just 14-year-old Emperor Mutsuhito, who chose the meaningful throne name Meiji (= enlightened rule). What remains remarkable about the Boshin War is the fact that both the victors and the defeated deliberately rejected foreign aid, which, by the way, would have certainly been offered. France, in particular, could only be kept from intervening in the war with much effort and diplomacy.

The reason why the political powers of Japan did not want aid from other countries were expressed by the commander of Edo on the occasion of the surrender on 6 April 1868: “Since the outbreak of the so-called foreign crisis, the Tokugawa did not only hold council among themselves but informed the [entire] empire, not thinking about their own benefit so that we would not suffer the same fate as India and China.”

Japan as a Client

Thus, Japan was not politically obliged to any western power after the change of rule and could choose its business partners based on economic rather than diplomatic considerations. It became a client eagerly courted by all countries.

The corps formed by young civil servants (the average age of them was just over 30 years) were ready to break new ground. The Iwakura Mission – during which high-ranking politicians negotiated the repeal of unequal treaties and, at the same time, studied and evaluated western institutions – became legendary. When this mission started at the end of 1871, Japan already had a new currency and its own mint, where western-style coins were produced – a clear sign of the importance the government attached to a new currency for the recovery of Japanese economy.

The Mint of Hong Kong Was Transferred to Osaka

As early as in 1868, the Japanese Minister of Finance took care of the monetary issue. He was lucky: the British mint in Hong Kong was dissolved, and Japan was able to obtain the entire equipment of the mint. The minister even succeeded in convincing the former mint director Thomas William Kinder to come to Japan. He received a salary of $1,045 per month, making him one of the best-paid foreigners in Japan. When he came to Osaka in 1870, another foreigner, Thomas James Water, had already erected the buildings for the new mint.

The location they chose was Osaka, the trade hub of the time, which was to develop into “Japanese Manchester” over the following decades. One reason for this was the mint, which turned out to be a center of innovation. Here, western-style manufacturing methods were adapted for numerous products that Japan had not produced industrially before. Thus, mint director Kinder equipped his mint with gasworks for lighting and began producing sulfuric acid in Osaka. Sulfuric acid was then, as is today, one of the most widely produced chemical substances, which is why its production volume is considered an indicator of a country’s degree of economic development.

Incidentally, western habits spread from the mint to the city of Osaka: the employees demonstratively wore western-style clothes and decided to go without the sword and the traditional samurai topknot. 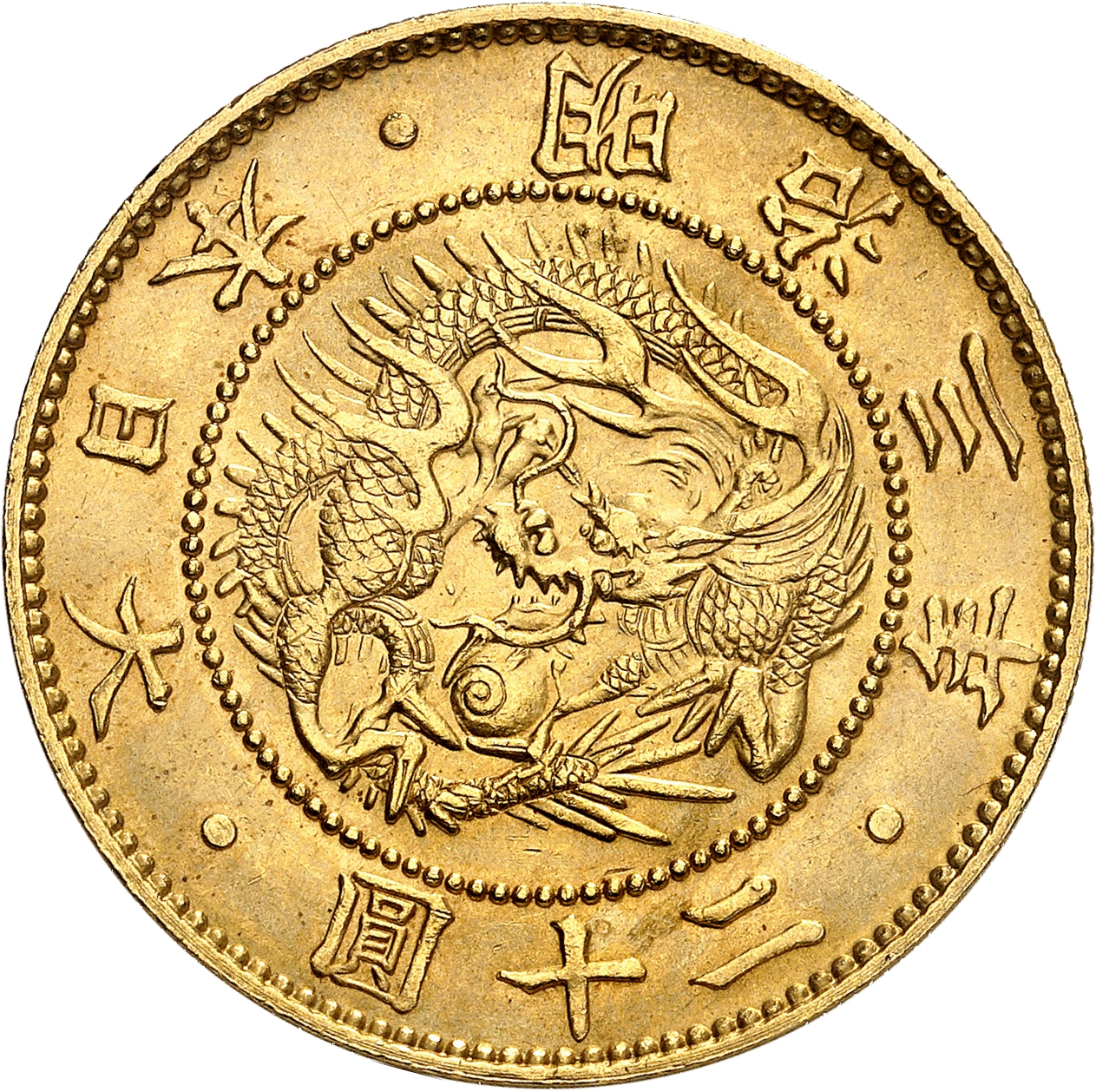 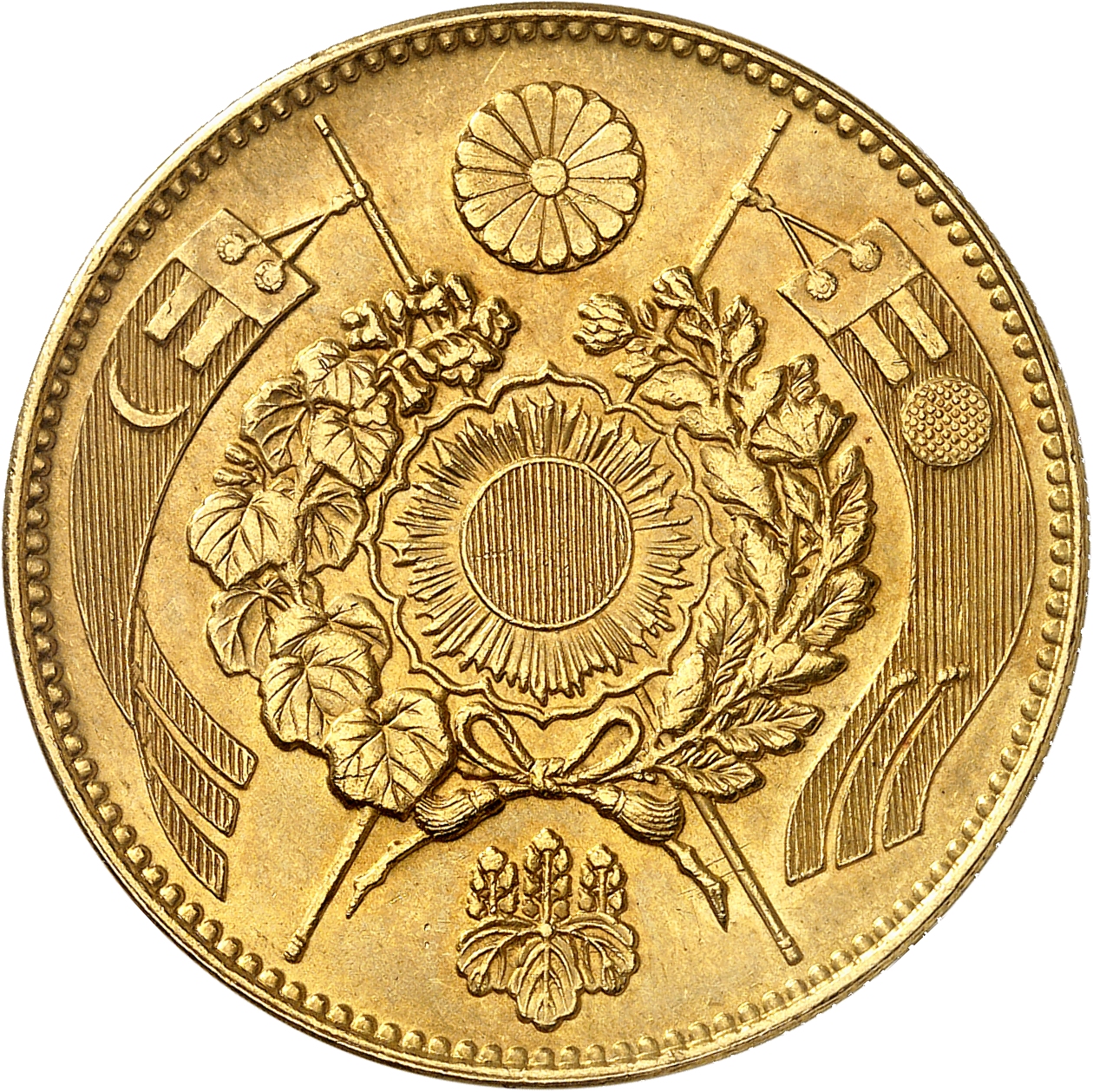 In 1869, the Japanese government decided to abandon the old currency hotchpotch in favor of a single national currency. What this means is illustrated by a survey of the Japanese Ministry of Economy of 1868: it found that between 1603 and 1867, a total of 1,694 different denominations had been issued and were still circulating. They were all to be replaced with new western-style coins based on the decimal system. They were called “yen” due to the circular shape of the coin. “Yen” simply means “circle” or “round”.

Three important Japanese artists created the design for the new single currency: it depicts a dragon on the obverse and the sun on the reverse as a reference to the Japanese Tenno – the emperor was considered to be the descendant of both Amaterasu, the sun goddess, and Watatsumi, the dragon god.

This design was sent to the Royal Mint in London, where Leonard Charles Wyon created dies for eight denominations. This resulted in patterns created by the Royal Mint, probably in the hope of winning Japan as a customer. But when the patterns arrived in Japan in April 1870, the mint in Osaka was already well-equipped to mint their own coins.

Was it a matter of national honor not to adopt the British design but to modify it? Anyway, the reverse was extensively revised and an additional denomination was created: the golden 20 yen piece.

Künker is able to offer one of these icons of Japanese coinage as an outstanding object from the of the Schwarz Collection, which will be auctioned off in sale 352 on 27 September 2021. The piece was purchased in 1937 at the Munich coin dealer Helbing. Since then, it has been part of the Hermann Schwarz Collection. Its outstanding quality, NGC graded it MS 65+, is due to the fact that it never entered circulation.

We can think of this 20 yen piece as sort of a pattern that was created before the law on the new currency was adopted in 1871. The few pieces that were minted before this date were probably exclusively given to the emperor and high-ranking officials. One might even assume that they were presented on the occasion of the Tenno’s visit to the Osaka mint. After all, we know that the Japanese Emperor visited the mint in person. How proud Thomas William Kinder was about this is demonstrated by the fact that this visit was even mentioned in his obituary. The Tenno seemed to have honored his mint master: Kinder was officially received at the imperial court three or four times before his departure in 1875.

Kinder left behind a well-functioning mint and qualified technicians capable of supplying their country with the coins it needed for its economic advancement. Thus, the 20 yen piece of 1870 is an impressive symbol for Japan’s ability to make use of western-style technologies to the benefit of its own prosperity.