Neuchâtel – or Neuenburg how it is called in the German-speaking part of Switzerland – was a so-called allied territory [pays allié] of the Confederacy. That means that although Neuchâtel was allied to the Old Confederacy by means of treaties, it was not a Swiss canton such as Bern, Basel or Schaffhausen. Even though Neuchâtel did send representatives to the Tagsatzung – the Swiss parliament – they were not entitled to vote.

This enabled the principality to pursue independent foreign policies, in the course of the 17th century, however, this situation became increasingly dangerous: the French King Louis XIV conquered one border area after the other in order to create a powerful, great French empire. Neuchâtel would have fitted perfectly into his portfolio. The principality could have become a bridgehead into the Swiss Confederacy for Louis. Protestant Bern, which shared a long border with Neuchâtel, was anything but thrilled about such French ambitions. Therefore, the situation became very tense when Marie de Nemours died childless on 15 June 1707. She had been the last hereditary princess of Neuchâtel, and after her death not less than nineteen potential heirs claimed the rule, including the nephew of the French king, the King of England and Frederick I, who had been King of Prussia since 1701. 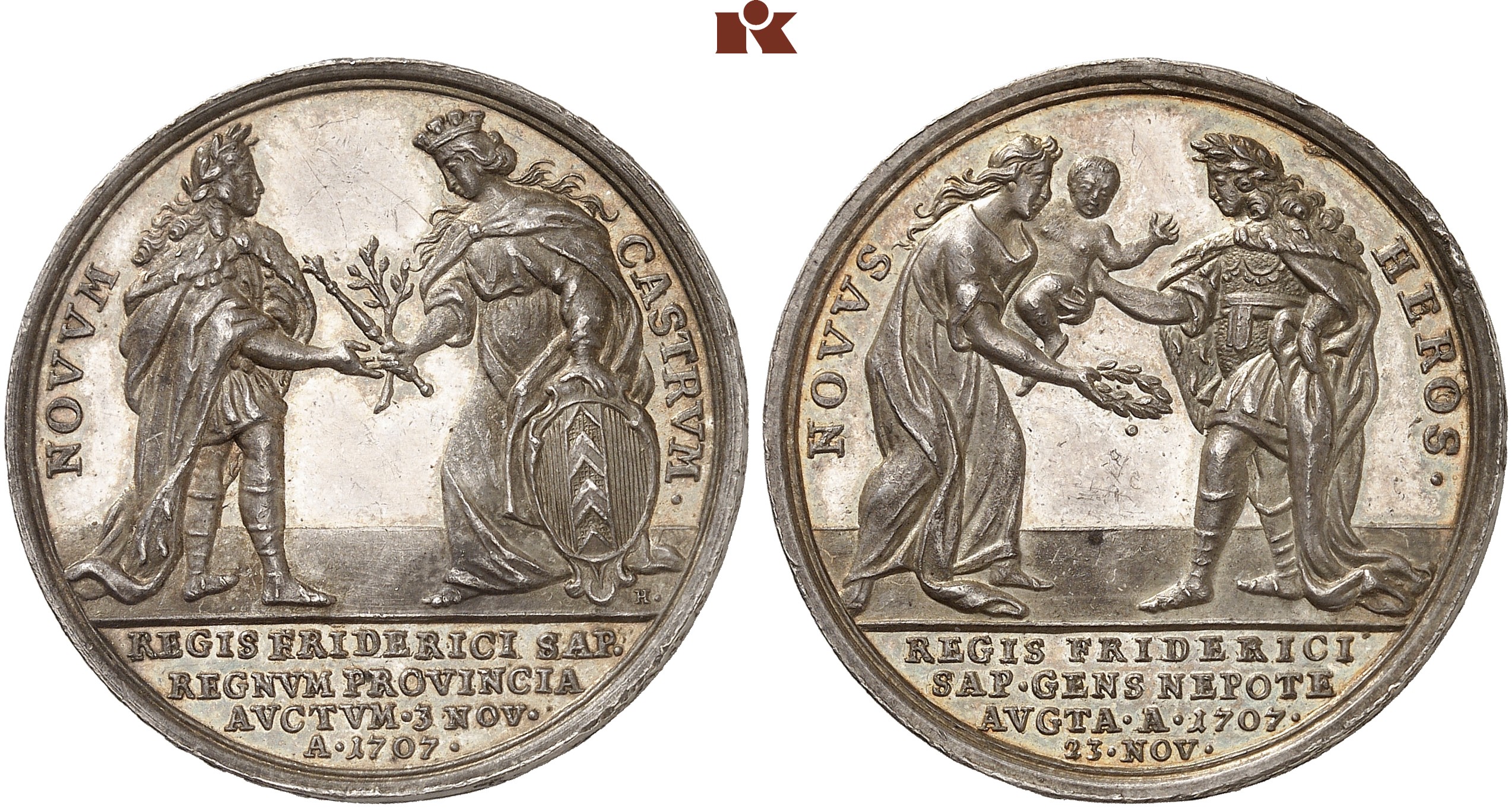 Silver medal 1707 by G. Hautsch commemorating the introduction of Prussian rule in the Principality of Neuchâtel and the birth of a grandson. Extremely fine to FDC. Estimate: 300 euros. From the Axel Tesmer Collection, Künker auction 353 (2021), No. 3239.

A Prussian Ruler for Neuchâtel

The decision was probably rather easy for the court of the Three Estates of Neuchâtel, which had to confirm the new ruler. They did not want a French prince who would have tied them even more closely to France. They needed a man who was known to be an energetic opponent of Louis XIV, and Frederick I fit this description.

He had – while still being an elector – abandoned the alliance with France that he had inherited from his father in favor of an alliance with the reformed Netherlands, and had sided with the Emperor in the War of the Spanish Succession. And he was known for his tolerance. After all, he had himself anointed by two bishops when he was crowned King of Prussia: by a reformed bishop – Frederick I was a convinced Calvinist – and a Lutheran – the majority of his subjects were Protestants. And, in addition, Frederick I was marvelously far away from Neuchâtel. He was not to be expected to intervene in day-to-day politics. Neighboring Bern, the most important Swiss power, had also declared its support for Frederick. What more could one wish for?

So, on 3 November 1707 the twelve judges of the court of the Three Estates appointed Frederick I the new Prince of Neuchâtel, a decision that almost resulted in a war. Louis XIV planned to march his garrisons to Neuchâtel. But the citizens of Neuchâtel got lucky: the French troops were needed more urgently on other battlefields. 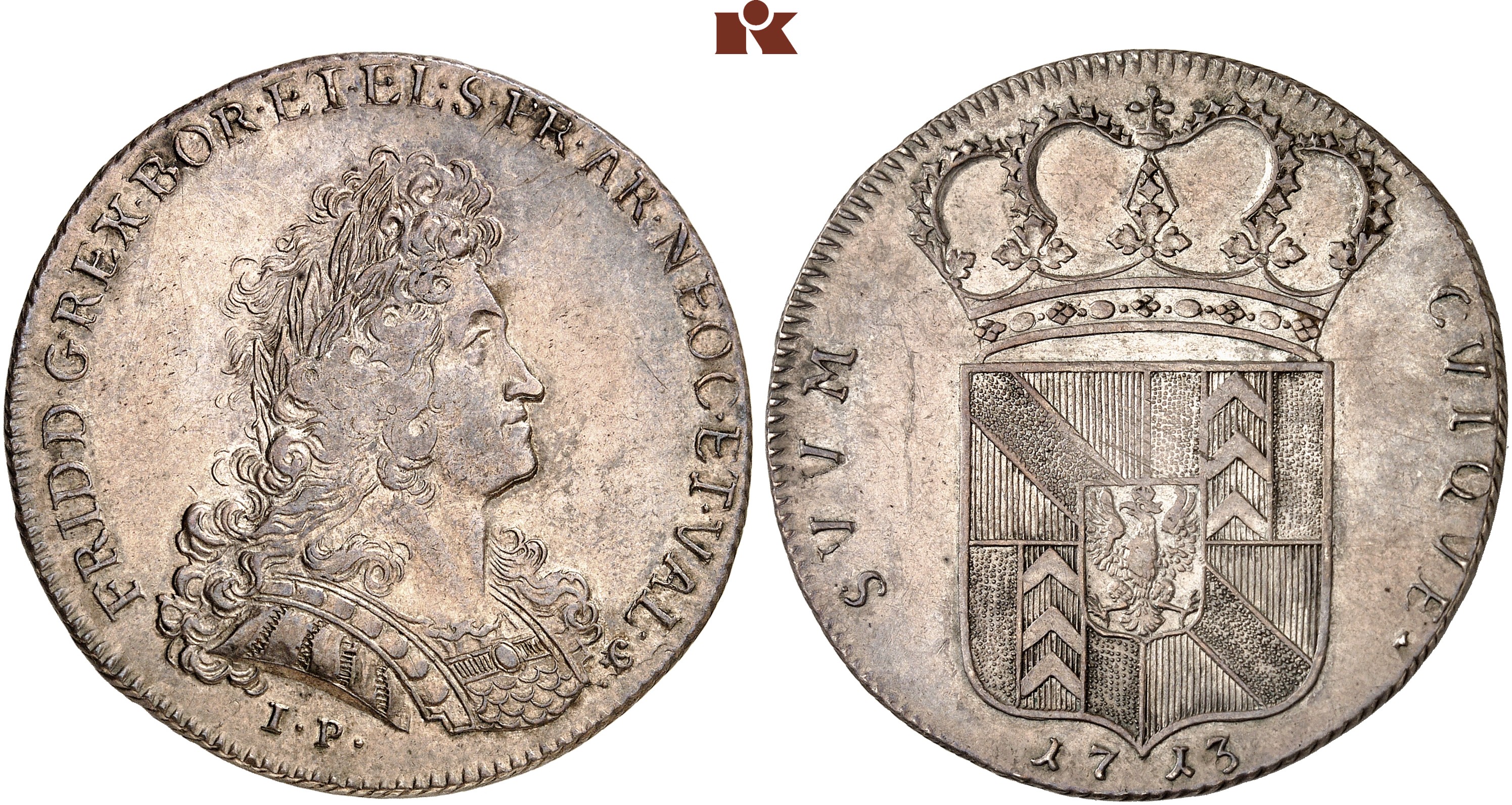 On 17 April 1711, Emperor Joseph I died without a son. His brother Charles, who was also the Habsburg pretender to the Spanish crown, inherited his rule. Thus, there was the risk of one man uniting both parts of Emperor Charles V’s realm, on which the sun never set, under one crown – a nightmare for English politicians. And what did this mean for the mint of Neuchâtel? Well, London forced everyone involved to gather around the negotiation table. Among the parties involved were also Berlin and Neuchâtel diplomates, who had represented the interests of Frederick I of Prussia in Utrecht since the spring of 1712. In 1713, the Peace of Utrecht established Prussia’s claim to the succession of Marie of Nemours.

Let us take a look at what had happen in the meantime at the Neuchâtel mint: There, Frederick I had already made clear at the end of 1711 that the production of coins with his portrait finally needed to be started. British preparations for the peace congress were in full swing, and Frederick I thought that he was in need of numismatic means of propaganda for the negotiations: Neuchâtel coins featuring his portrait were to underline his claim to the principality. Thus, dies were ordered. But there was a problem: an ugly dispute with the former mint master of Neuchâtel. Thus, Frederick sent a Neuchâtel state councilor to Geneva to settle the argument. In the autumn of 1712, Frederick finally gave the order to mint the coins he needed. In the same year, a first pattern for gold pistols was produced, as well as numerous half batzens.

While the mint of Neuchâtel started to mint coins of small denominations on behalf of Frederick, the latter died on 25 February 1713 before the Peace of Utrecht had even been signed. This raised the question of whether coin production should be stopped until dies with the name of the new ruler Frederick William I were created. Being the thrifty head of state he became known for, the man we know as the Soldier King decided against it. The mint continued to produce coins with the existing dies. The coin we see here was not made in 1713 but in May 1714. Only 1,622 pieces of it were produced.

On the obverse, the piece features the royal portrait and on the reverse the crowned coat of arms of the counties of Chalon and Neuchâtel with the Prussian eagle on the surtout. Frederick’s Motto “Suum cuique” – to each their own – is quoted on the reverse. The signature I.P. on the neck commemorates Jean Patry, the mint master of Geneva and wardein of the mint of Neuchâtel.

This means that Neuchâtel talers of 1713 were actually minted in 1714. And they were not created in Neuchâtel but in Bern. This was because the mint’s balancier broke during the production of half talers, and without this press, large silver coins could not be minted. Following the advice of the mint master, the production was then carried out in Bern where these coins were minted in May 1714. 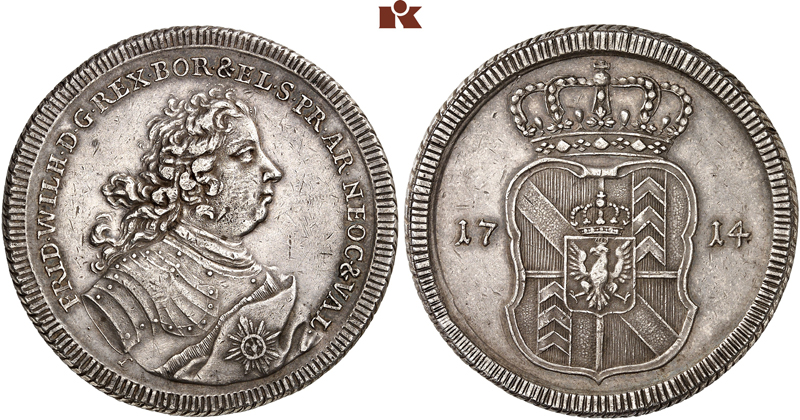 A Broken Balancier and Its Numismatic Consequences

So the balancier was broken. That is why the mint of Neuchâtel was closed on 1 June 1714. But despite all his modesty, the Soldier King wanted at least a few Neuchâtel talers with his portrait to use them as gifts. Therefore, he commissioned the Berlin mint to produce such talers. Christian Friedrich Lüders, to whom the tiny L under the arm section of this coin refers, created the dies that were used to produce the extremely rare taler with the year 1714 and the even rarer half taler with the year 1715.

Frederick II also considered reopening the Neuchâtel mint for his own purposes. However, the cost put him off and given the monetary situation it did not seem likely to make a decent profit with this mint. And soon Frederick II had other things to worry about.

The fact that the people of Neuchâtel would not have been willing to give up their good reputation and their mint to be involved in the royal monetary frauds of the Seven Years’ War can be deduced from their radical reaction when Frederick II tried to get more tax money from them to finance his war: they murdered the Prussian viceroy in 1768. Through Bern’s mediation, this revolt went unpunished. The new governor, the Bernese patrician and Prussian lieutenant general Robert Scipio von Lentulus had too much else to do to take the time to travel regularly to Neuchâtel.

The numismatic information comes from the standard work on Neuchâtel coinage written by Charles Froidevaux, which was published in 2019 under the title “Histoire économique et monétaire en Suisse occidentale (1589-1818)”.