Throughout his life, Elector Maximilian I of Bavaria carried a mysterious box with him, the contents of which he never showed to anyone. When the box was opened after his death, it was found to contain several bloodstained scourges, a spiky penitential chain and a sackcloth. The prince of the Thirty Years’ War had regularly undergone painful penitential exercises in the silence of his bedchamber.

Could there be better proof for the profound faith of this major player in the Thirty Years’ War? Today, we may no longer comprehend his piety. But it certainly embeds the efforts made by Maximilian I to convert his subjects to the “one true” faith in their context. 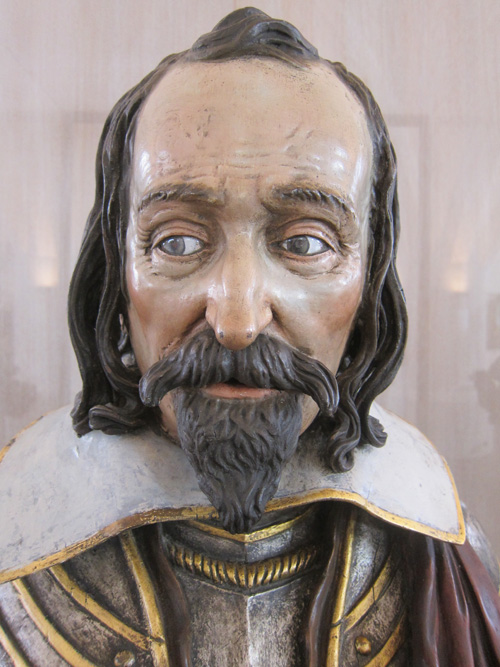 Maximilian lived at a time when a prince understood himself as a patriarch that was appointed by God and had the duty of making use of his greater insight to ensure that the subjects entrusted to him would enter the kingdom of heaven. For this purpose, he used every means of power available to him. First and foremost, of course, his privilege to enact laws. As it happened in all other states at that time, Maximilian intervened in the private lives of his subjects in order to prevent them from committing sins against the commandments of the Church. He decreed that every Bavarian citizen had to go to confession and attend Holy Communion at least once a year – at Easter to be precise. To prove that the confession had been made, citizens received a confession slip from the father confessor, which they then had to present to the priest in charge of them. One also had to adhere to this duty when travelling abroad. Anyone who failed to present a confession slip was reported to the authorities, which could then impose fines, prison sentences, or even expulsion in the case of persistent offenders.

Attending church services – including the sermon – was mandatory on Sundays and holidays. Of course, there were also laws against swearing, gambling, breaking the fast and much more. Infamous to this day are the Bavarian marriage laws, which imposed death penalty as a punishment for repeated adultery – a legal stipulation that was probably intended as a deterrent since such a sentence has never been pronounced. 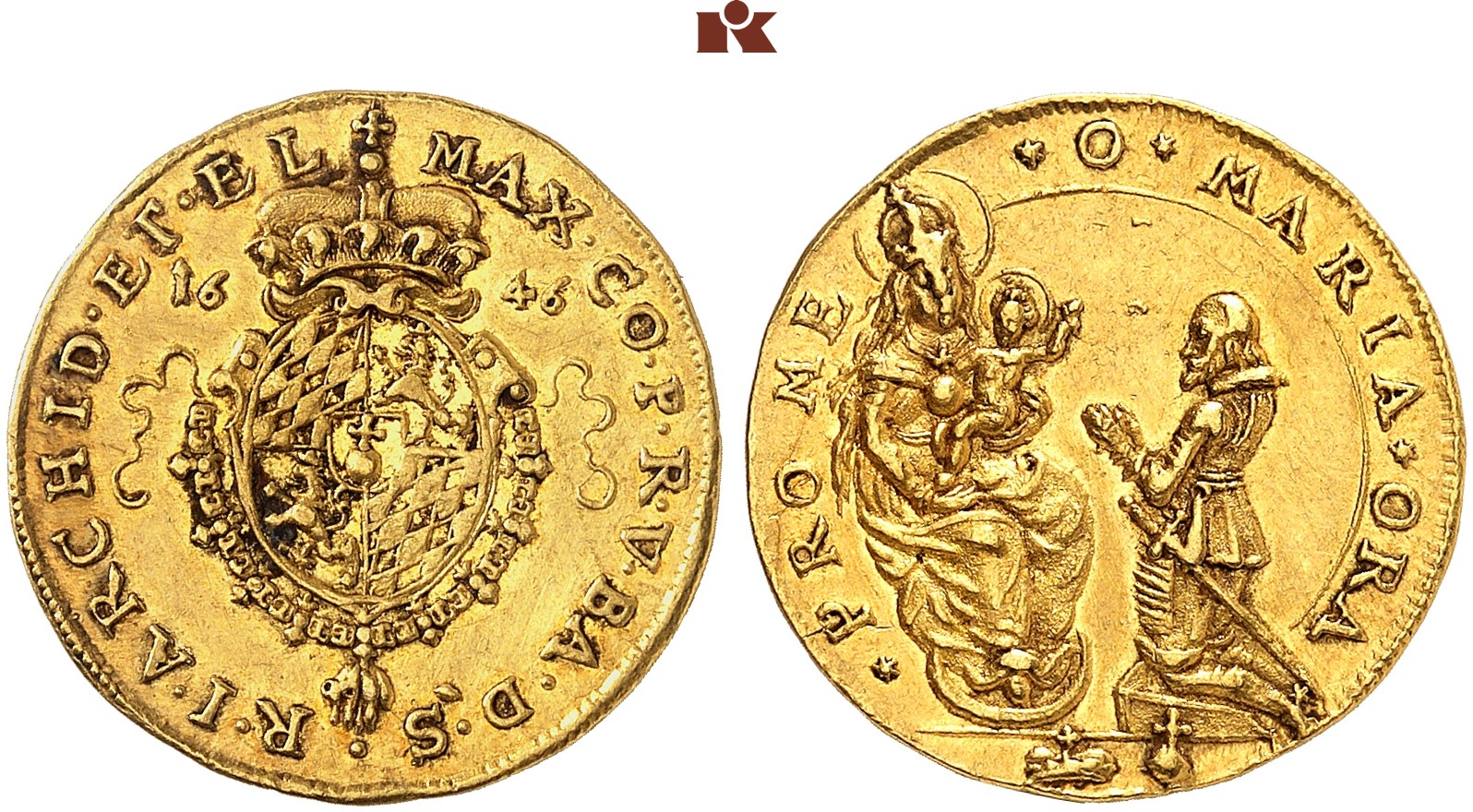 Maximilian was particularly devout to Mary, the Mother of God. While Protestant and especially Calvinist theologians claimed that the saints of the church did not have the power to intervene in the process of salvation, the Catholic Church virtually turned Mary into an exemplary saint. She was considered to be of great help, be it against Protestants, Turks or Swedes.

So when Maximilian had depicted himself on ducats kneeling in front of the Mother of God, he really meant it. He prayed to her to make sure that he himself and the Catholic cause had Mary’s support. We know that the Duke retired to pray at least three hours a day – in addition to attending daily church service. In this context, the prayer of the rosary, which he promoted, played a major role. And he also wanted to enforce this among his subjects: he decreed that everyone had to have a rosary at hand at any time.

However, Maximilian did not only rely on mandates and regulations. He promoted the veneration of the Mother of God by creating as many small and large places of worship as possible – in the ecclesiastical but also in the secular context. This included, for example, supporting the major Marian pilgrimage sites of Bavaria. The best-known is probably Altötting, where the hearts of Bavarian prince-electors have been buried since Maximilian I, and where a letter of consecration by Maximilian to Mary written with his own blood is still kept today. 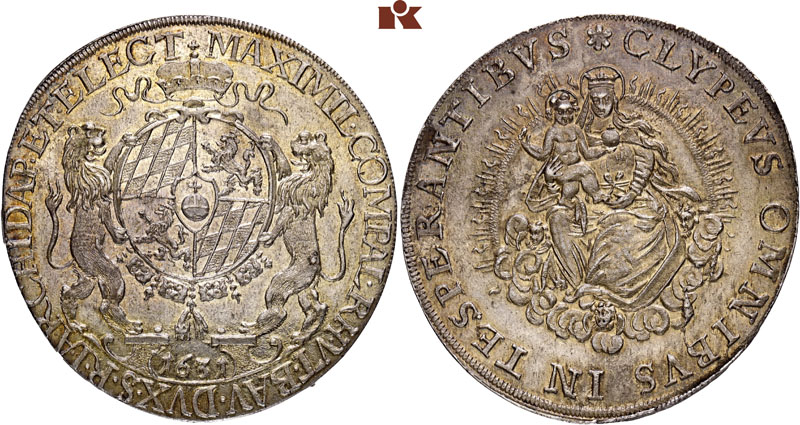 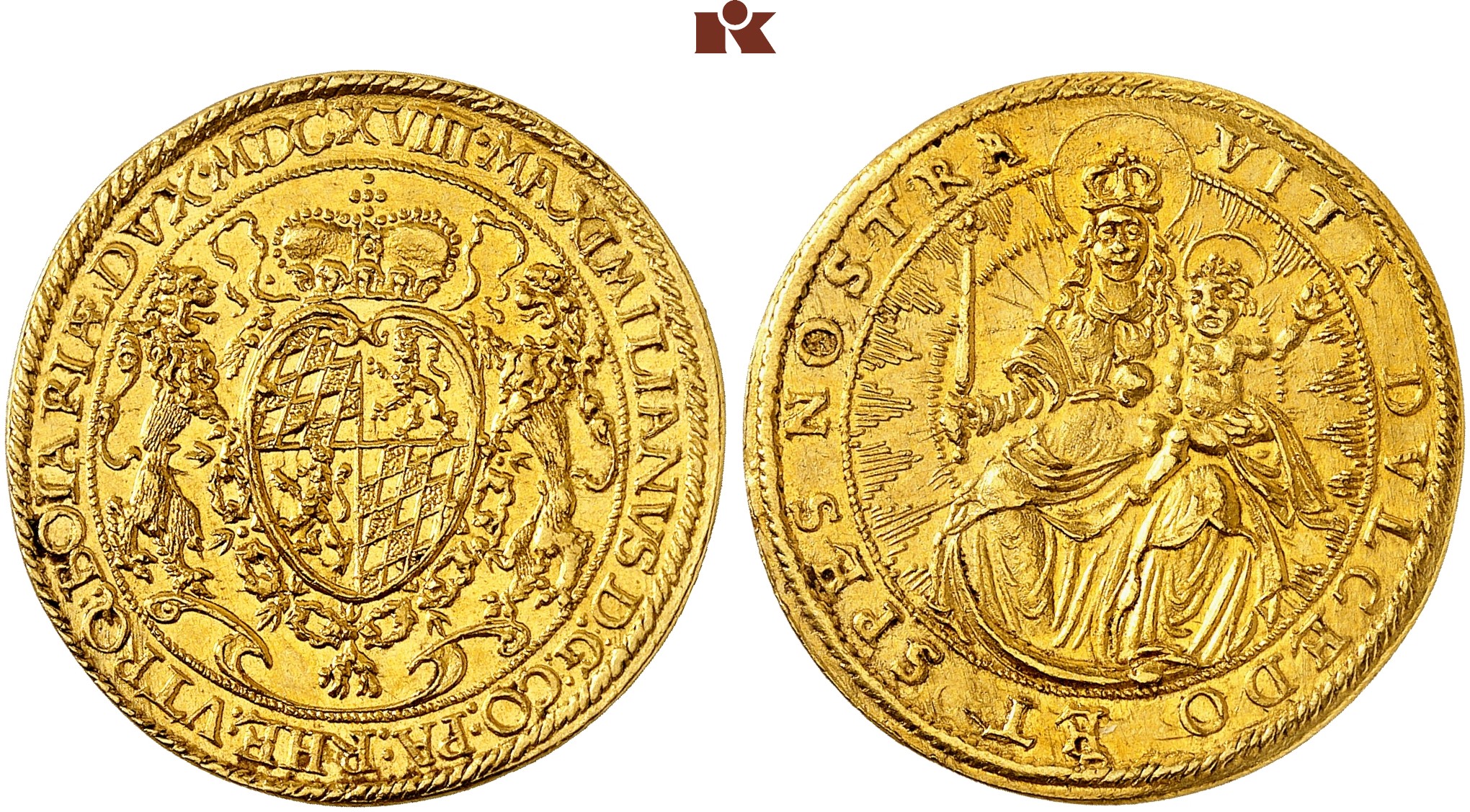 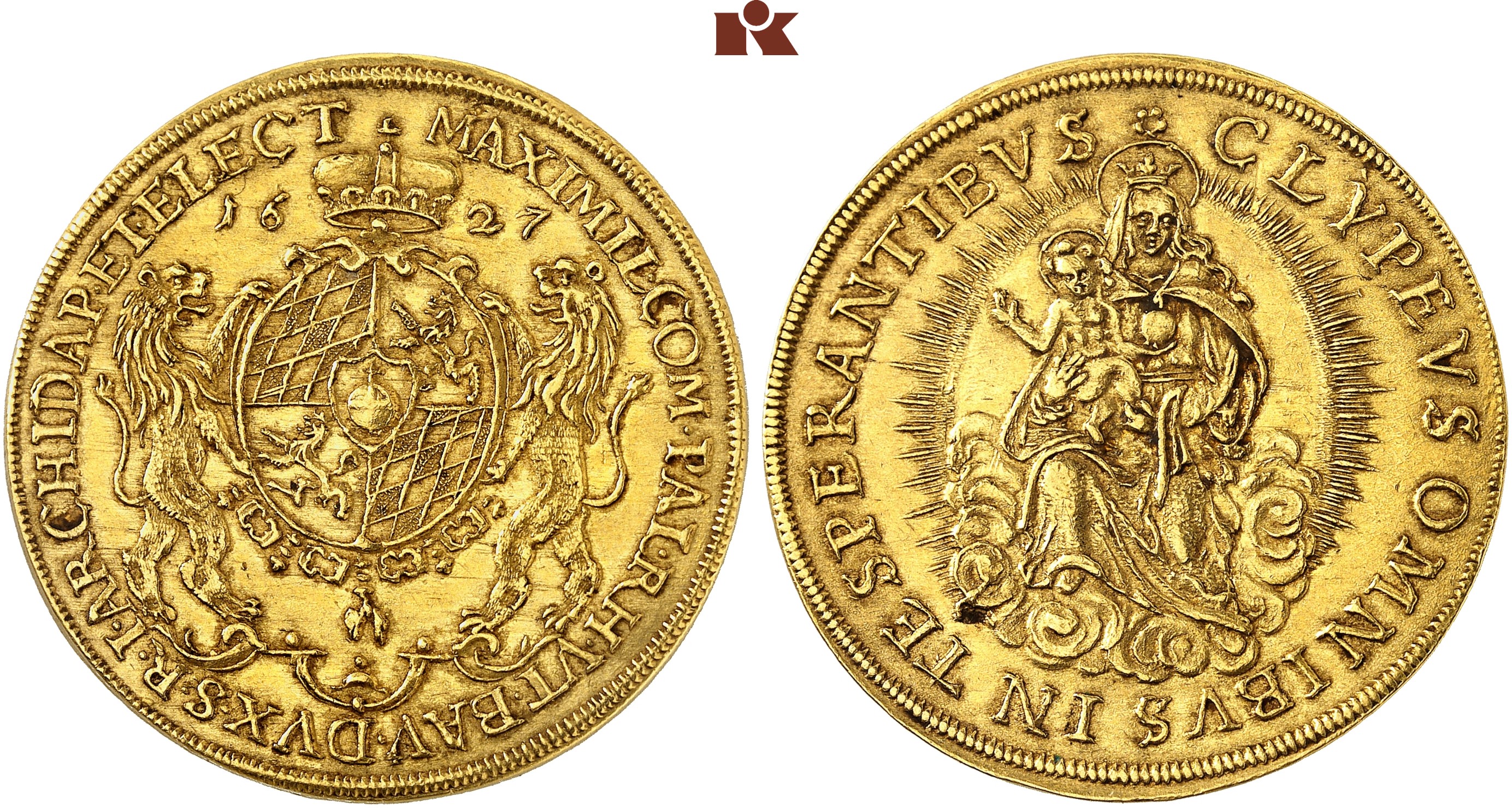 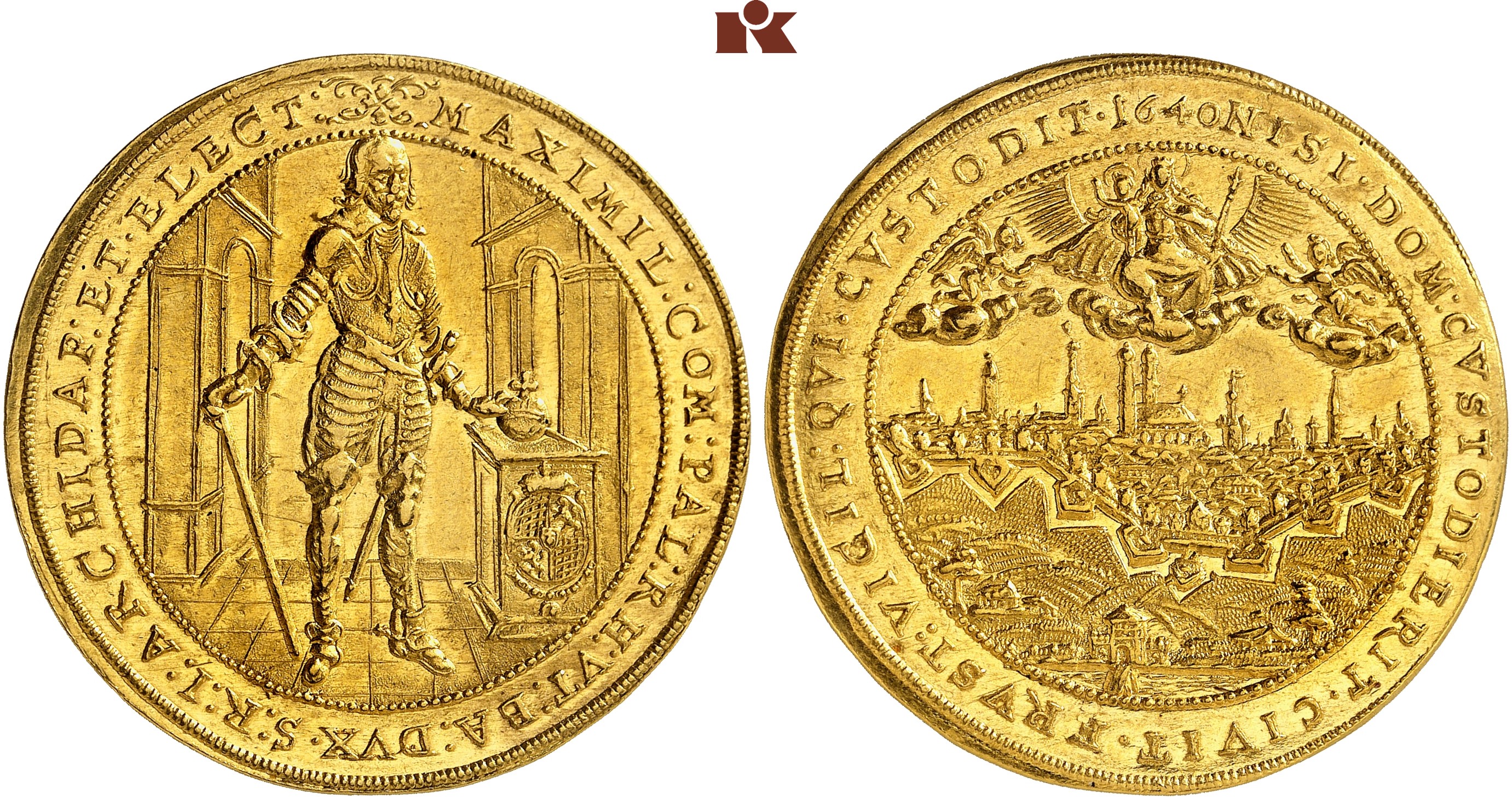 Since the rule of Maximilian I, Mary has played a major role in Bavarian coinage. She is depicted on numerous coins, always using a similar image. In Bavaria, people did not venerate the humble maiden of the Annunciation, nor the poor fugitive who had to give birth in a stable, nor the mourning mother under the cross – they worshipped the glorious Queen of Heaven. On all Bavarian coins, Mary sits on a throne of clouds, surrounded by a halo. Occasionally, – in our case on the 1646 ducat – we can see a crescent moon at her feet, alluding to the pregnant woman of John’s Apocalypse who became the mother of the ruler of the world. Scepter and crown, sometimes an orb, refer to Mary’s rule over the heart of her son Jesus Christ, who cannot refuse any of his mother’s requests. She wears a large coat, under which she protects all those in her care from the dangers of the world. This is how she is worshipped in Bavaria – as can be read on Bavarian talers – as the shield of all those who place their hope in her.

Maximilian turned his coins into little manifestos of Marian devotion that were intended to remind his subjects of their religious duty in everyday life. Similarly, he had the wall of his residence decorated with a statue of the Queen of Heaven, an idea that was to become a new trend. The fact that Madonnas still have a place on the walls of many Bavarian houses today goes back to Maximilian I, just as, incidentally, does the Feast of the Assumption of Mary, which is still celebrated in Bavaria.

Mother Mary, Pray for Us: The Victory of White Mountain

Maximilian I believed that the support of the Mother of God was responsible for many of his successes. He therefore demonstratively started important military campaigns on Marian feast days whenever possible or dedicated the battle to her at least.

In November 1620, the forces of the Winter King Frederick V of the Palatinate and the imperial troops supported by the Bavarian army faced each other outside Prague at White Mountain. While the Bohemian army consisted of only about 14,000 men, the imperial commander Bucquoy and the Bavarian commander Tilly had a joint army of 26,000 men at their disposal. Nevertheless, Bucquoy hesitated to attack while Tilly and Maximilian wanted to seize the opportunity. Only the charismatic Carmelite Domenico a Jesú Maria was able to persuade Bucquoy. He is said to have promised Mary’s support if the army went into battle in her name. So, while Bucquoy, Maximilian and Domenico a Jesú Maria jointly prayed one “Salve Regina” after another, Tilly went into battle with an army roaring “Sancta Maria”. He won, and legend imaginatively altered the story.

Now it was said that the Carmelite Domenico a Jesú Maria had shown the soldiers a picture of the Holy Family that had been desecrated by Protestant looters. They had poked Mary’s and Joseph’s eyes out! The Catholic troops were so outraged by this sacrilege that they went into battle crying “Sancta Maria” without anyone telling them to. Mary then gave them the victory, whereupon the Carmelite took the miraculous picture to Rome where it became the center of the Carmelite church of Santa Maria della Vittoria. Do not bother trying to find it there, it was destroyed by a fire in 1833. 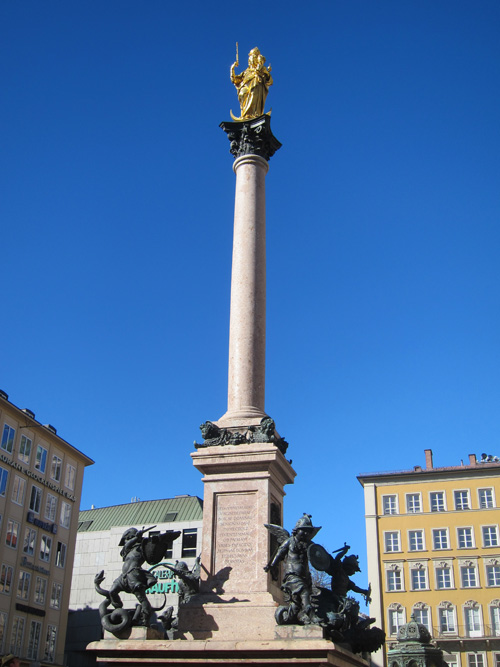 Mary’s Column in the center of Mary’s Square in Munich. Photo: KW. 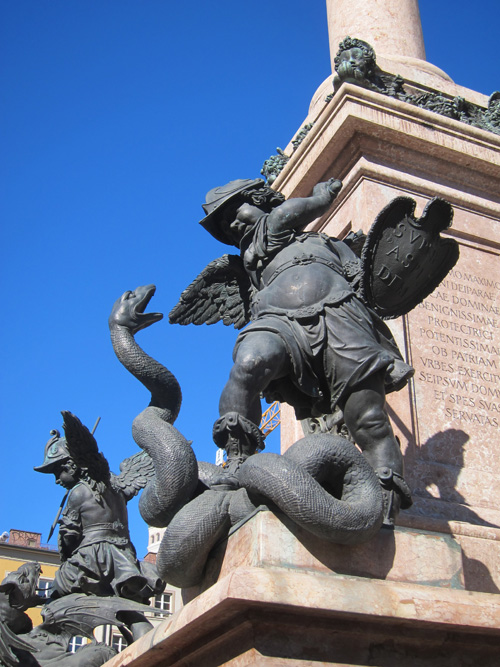 At the foot of the column, armed angels still fight against evil, here symbolized by a snake. Photo: KW.

In 1632, the Swedes invaded Bavaria. They could have sacked Munich. But Gustavus Adolphus preferred to be paid contributions. Maximilian I interpreted this as the work of the Mother of God, to whom he had made a vow if his residential cities of Munich and Landshut were spared.

In 1635, he asked the Privy Council for suggestions on how to honor the vow. Drawing on the great victory columns of antiquity, the Chamber President Johann Mändl suggested Maximilian to build his own votive column. The suggestion was immediately put into practice.

In 1637, the Duke informed the Munich City Council of his decision to erect Mary’s Column at Schrannenplatz (Grain Market Square). The consecration by the Bishop of Freising took place one year later and, of course, on the anniversary of the Battle of White Mountain: 7 November 1638.

Since then, Mary has stood in the center of Munich. We are familiar with many of her attributes – crown, scepter, crescent moon – from Bavarian talers. At her feet, four armed angels fight against evil according to a verse of Psalm 90: “You shall walk upon the asp and the basilisk: and you shall trample under foot the lion and the dragon.”

For the people of Munich, Mary’s Column became the center of their city. They identified with it so much that Schrannenplatz became “Marienplatz” (Mary’s Square). 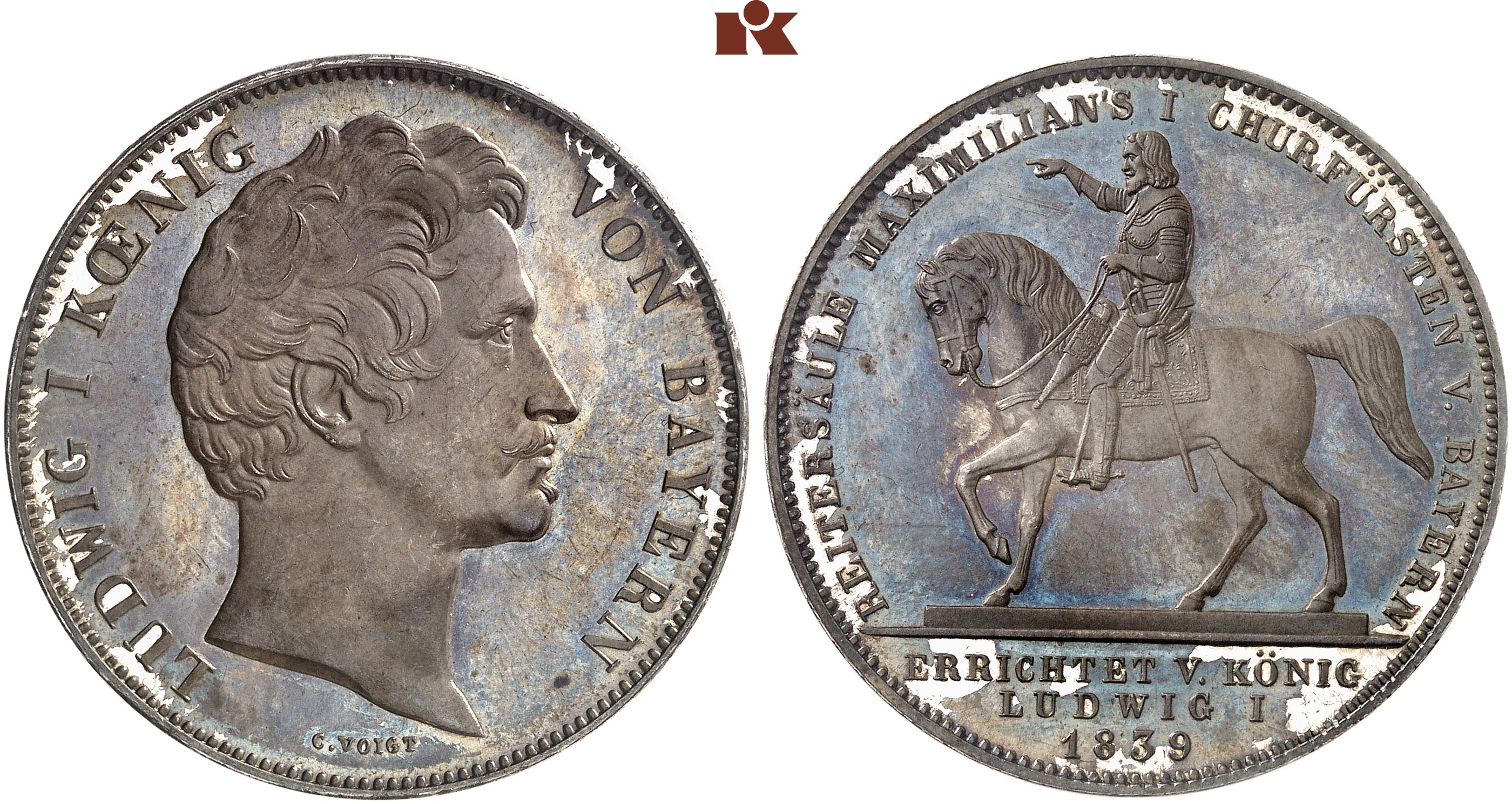 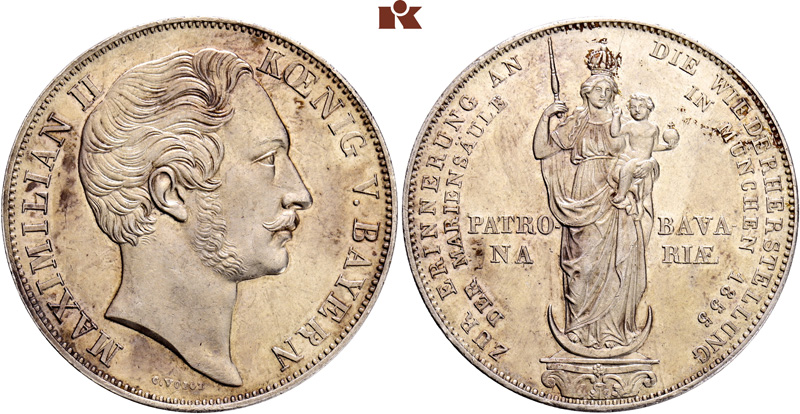 Maximilian I had a lasting influence on Bavaria and Munich. Many forms of piety initiated by him are still practiced in Bavarian churches today, many buildings he erected are now popular backgrounds for selfies taken by tourists from all over the world, unaware of the fact that Mary’s Column, for instance, that can be seen in the background, has its very own story.