A Testimony to the Habsburgs’ Claim to Power: The Three Emperors Issue

They are among the most enigmatic issues of Habsburg numismatics, those representative coins with the face value of one resp. half a taler that depict three important Habsburg Emperors on the obverse: Maximilian I, Charles V and Ferdinand I. The problem: the legends on the coin don’t mention the man who commissioned the issue. The circumscription on the obverse simply reads: Emperors of the Romans and Kings of Spain by the grace of God. The inscriptions on the reverse vary and are combined with different coats of arms or the imperial eagle, in rare cases they even depict the image of a long-dead Habsburg, namely of Frederick III, who held the office of Emperor between 1452 and 1493.

To approach the background story of this issue, or rather these issues, we have to recall that the office of Emperor was by no means reserved for Habsburg rulers – even if this might seem to be the case after the 16th century. On the contrary: the ruler of the Holy Roman Empire of the German Nation was chosen by the Electoral College. The Archbishops of Cologne, Mainz and Trier, together with the Margrave of Brandenburg, the King of Bohemia, the Count Palatine of the Rhine and the Duke of Saxony, had the privilege of choosing freely between all potential candidates. For centuries, the electors used this privilege to make future emperors agree to important concessions in exchange for their vote in the Electoral College. An electoral capitulation, as it was called, was a written contract by means of which a candidate stipulated the concessions he promised to make if he was to be elected.

But ever since Frederick III had been elected Roman-German king in 1440 and crowned Emperor in 1452, the long line of Habsburg rulers was only interrupted on rare occasions. This was because Frederick III had the brilliant idea of having his son Maximilian I elected Roman-German King while he was still alive. Charles V triumphed over the competing French and English Kings, and when he abdicated, he handed over the office to his brother Ferdinand I, an act that was approved by the electors.

By this time, however, the Reformation had completely changed the conditions that prevailed in the Holy Roman Empire. Most of the secular princes had become Protestant. Thus, they had no chance of obtaining the votes of the three ecclesiastical electors. And as Kings of Bohemia, the Habsburgs held the fourth vote in the Electoral College. Thus, they could almost be sure to get the majority of votes since they provided the candidate for the Catholic side. 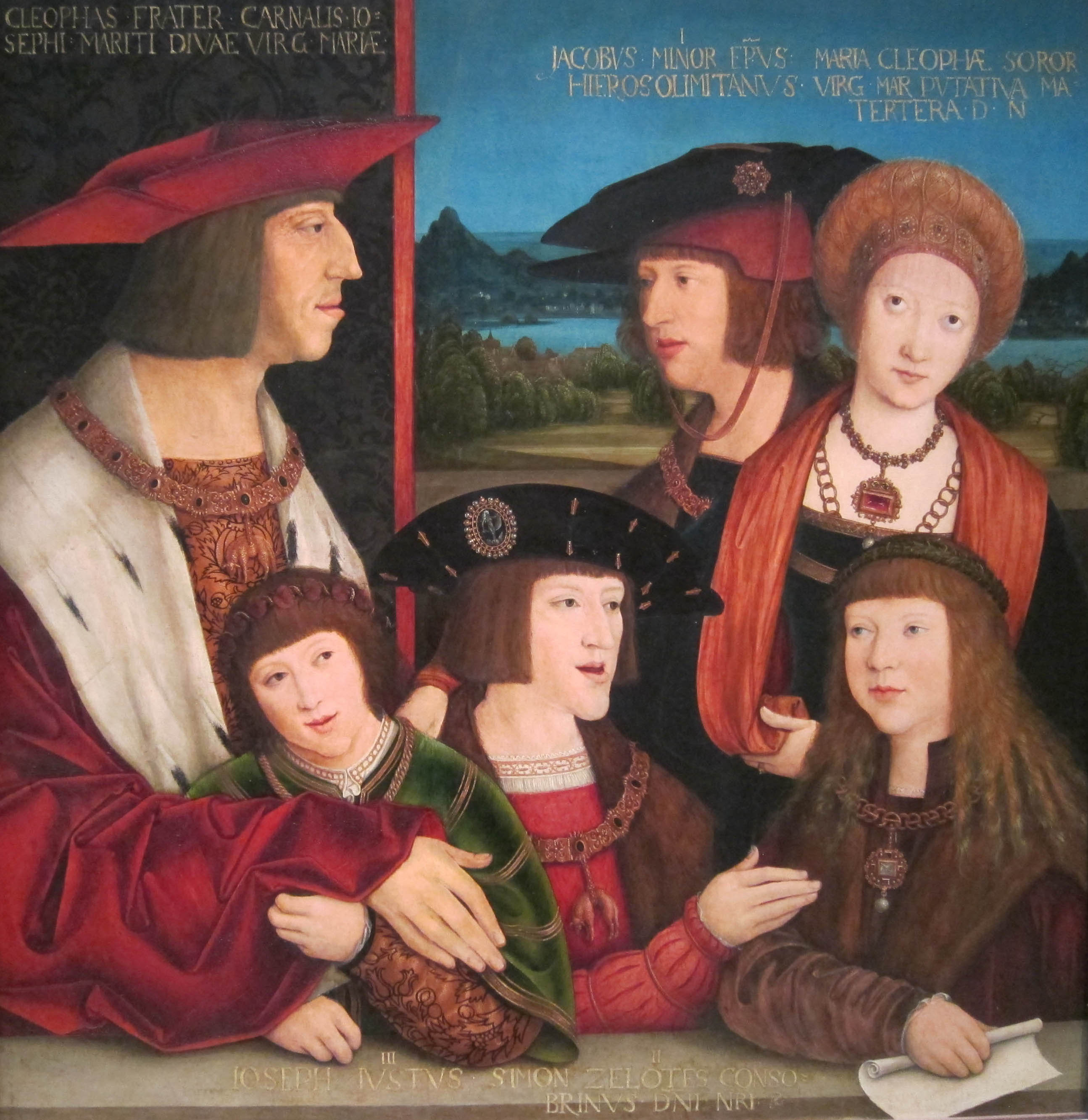 Family portrait of Maximilian I; he holds his grandson Ferdinand I in his arms. The future Emperor Charles is standing in the middle. In the background on the right is Mary of Burgundy, behind her Philip the Fair. Painting by Bernhard Strigel. KHM, Vienna. Photo: KW.

Since then – and with each successive Habsburg ruler who was elected – the Habsburgs gradually established themselves as the only dynasty worthy of imperial power in Europe. The Three Emperors Issue is nothing but their claim to power over the Holy Roman Empire, crystallized into a representative coin. 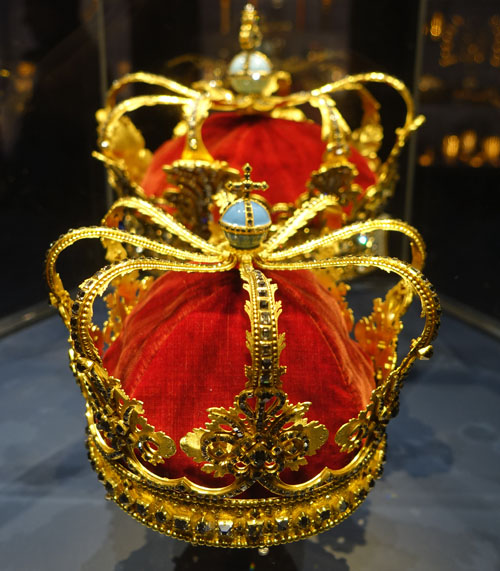 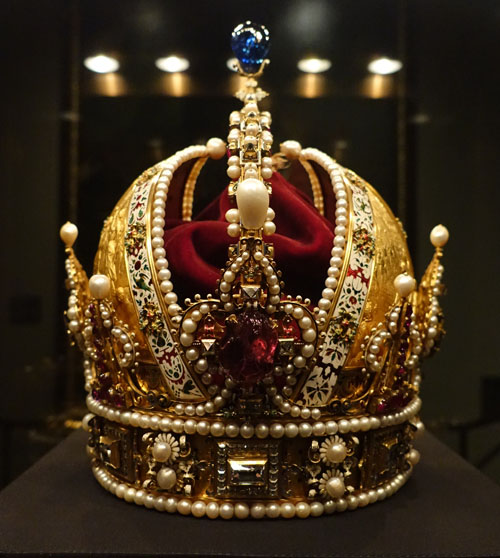 But Who Issued Our Coin?

In general, it must be stated that two different obverse dies were used for the Three Emperors Issue. One of them – fig. 1, see above – depicts the emperors with hoop crowns, the other one – fig. 6, see below – depicts them with so-called miter crowns.

To answer the question of who was responsible for the Three Emperors Issue with hoop crowns, we can employ a method that is readily used in numismatics when it comes to determining the ruler who commissioned an issue. This method is called die comparison. It is based on the fact that producing dies was expensive, which is why many mints used already-existing dies to create new issues. Although we know of some rare cases in which a certain die was only re-used after many years, the fact that coins were minted with the same die usually indicates that they were minted shortly after one another.

In our case, the die with the coat of arms of fig. 1 was also used for representative coins that feature the portrait of the Tyrolean Archduke Ferdinand II on the obverse. In his 2013 catalog of Habsburg medals and representative coins in the Kunsthistorisches Museum Vienna, Heinz Winter draws attention to the fact that these coins were minted with the same die – an observation that was first made in the 1977 work by Heinz Moser and Heinz Tursky on the coinage of the Hall mint. Winter therefore argues that the first group was probably commissioned by the Tyrolean Archduke Ferdinand II. Due to stylistic reasons, he believes that the coins were struck between 1564 and 1580. 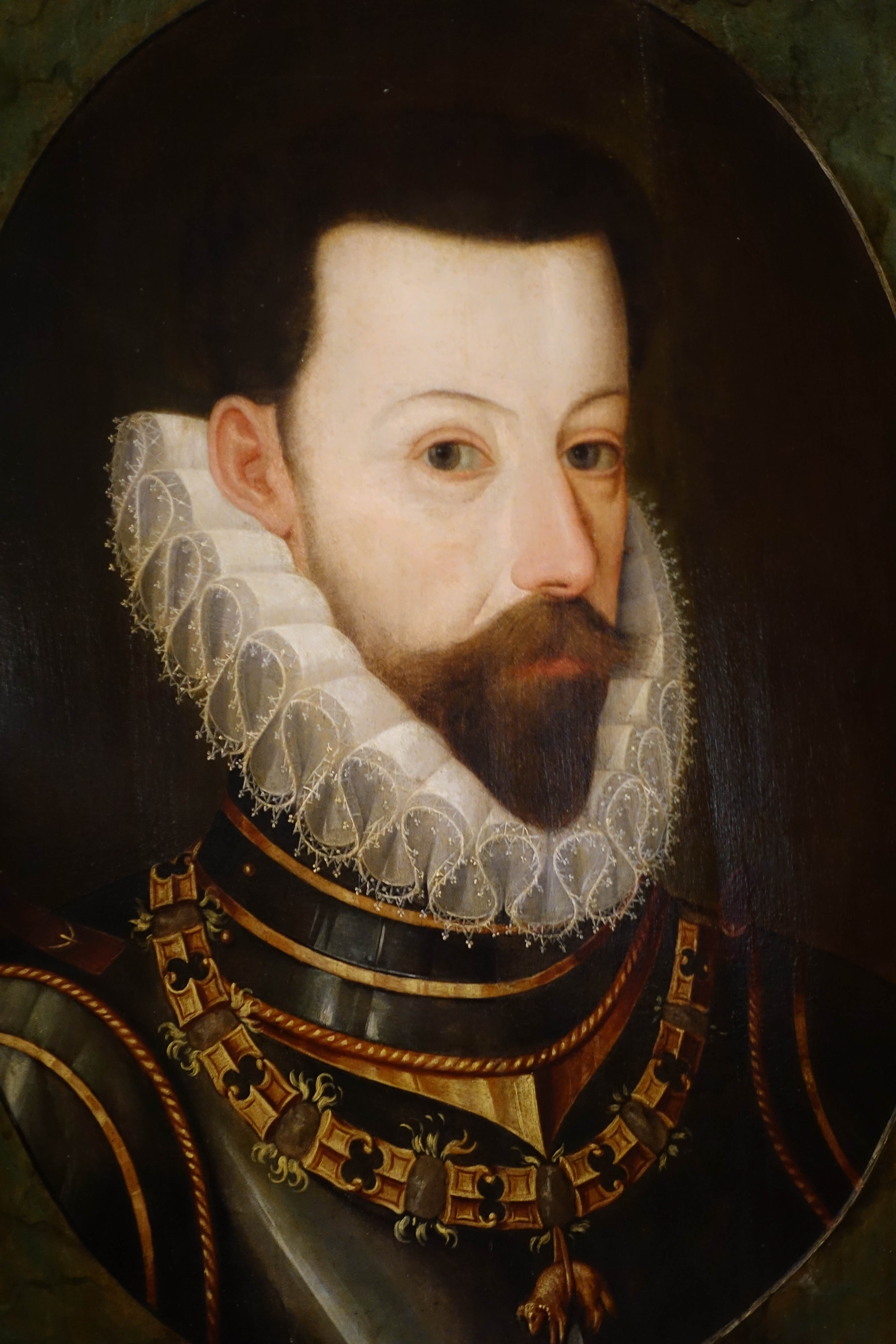 One may well imagine Archduke Ferdinand II of Tyrol to be the one responsible for this brilliant choice of imagery. He was born in 1529 in Linz, and was first at the head of the Bohemian administration before the county of Tyrol was placed under his responsibility in 1564. Tour guides at Ambras Castle love to tell that he married a commoner, Philippine Welser from Augsburg, and that his brother only allowed him to do so on the condition that no one would find out about it. Only a few know, however, that Ferdinand II asked for the hand of Anna Caterina of Gonzaga, whom he married in the year of Philippine’s death, while his wife was still alive. Three daughters were born from this second union, the youngest of whom married the later Emperor Matthias, a fact that is not entirely unrelated to the subject of the Three Emperors Issue.

In any case, one fact is obvious to every visitor to Ambras Castle: Ferdinand II was an enthusiastic collector, whose art and treasure chamber could certainly compete with the collection of Emperor Rudolf II. And, of course, Ferdinand II possessed an impressive coin collection, which may well have served him as an inspiration. After all, it was under his reign that the mint of Hall became an innovative center of Habsburg coinage and that roller minting was perfected.

So we can certainly believe this connoisseur of ancient and contemporary coinage to be capable of coming up with the concept of the Three Emperors Issue in collaboration with the craftsmen who worked for him at the Hall mint.

These coins must have been a huge success because Ferdinand II commissioned a second issue, which also depicted the three Emperors. This time, however, they were looking to the left. This second issue is dated 1590. 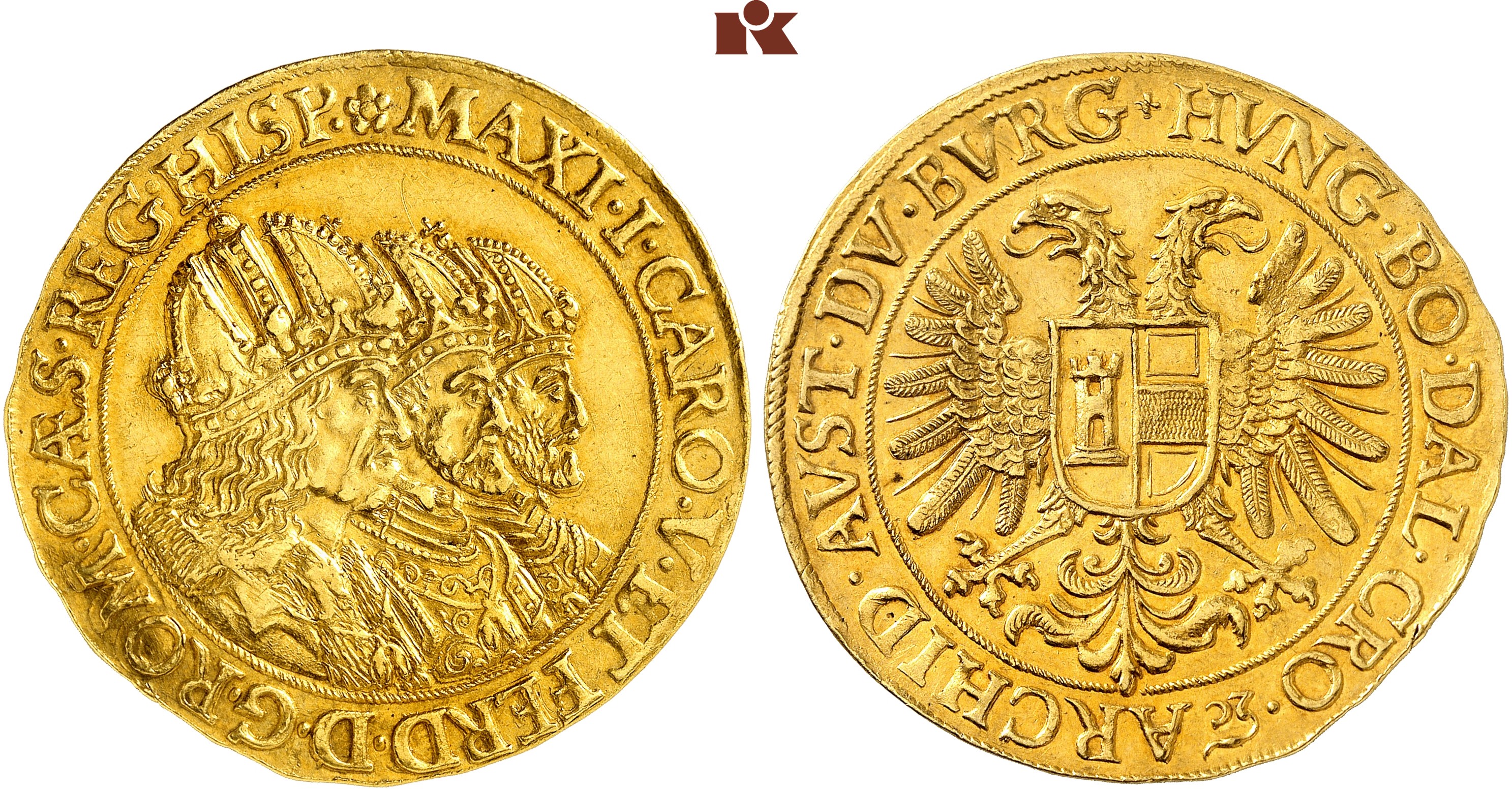 Fraternal Quarrel in the House of Habsburg

Another issue followed, which – again by means of die comparison – can be associated with Emperor Matthias. Ivo Halačka proved that the issue was minted under his rule, i.e. in the period between 1612 and 1619. It was not created in Hall but in Bohemia, probably in Prague.

But why did Matthias revive this image? The answer is simple, he had done something unheard of: he had used military force to pressure his brother Rudolf II to cede him his office while he was still alive. In 1608, Matthias became King of Hungary and Croatia, in 1611 King of Bohemia, in 1612 – after the death of his brother Rudolf – he became Emperor of the Holy Roman Empire.

Matthias mastered all facets of public relations. This is evidenced by the fact that many people still see Rudolf II as a madman who strolled through his collections in Prague Castle. Without going into too much detail at this point: Rudolf II accomplished a lot during his reign. And Matthias had to perform the balancing act of emphasizing the Habsburg monopoly on the emperorship while completely discrediting his predecessor.

Resorting to the three most important rulers of the Habsburg dynasty was probably a perfect fit for his PR campaign. And given the fact that his wife was the daughter of the man who “invented” the Three Emperors Issue... 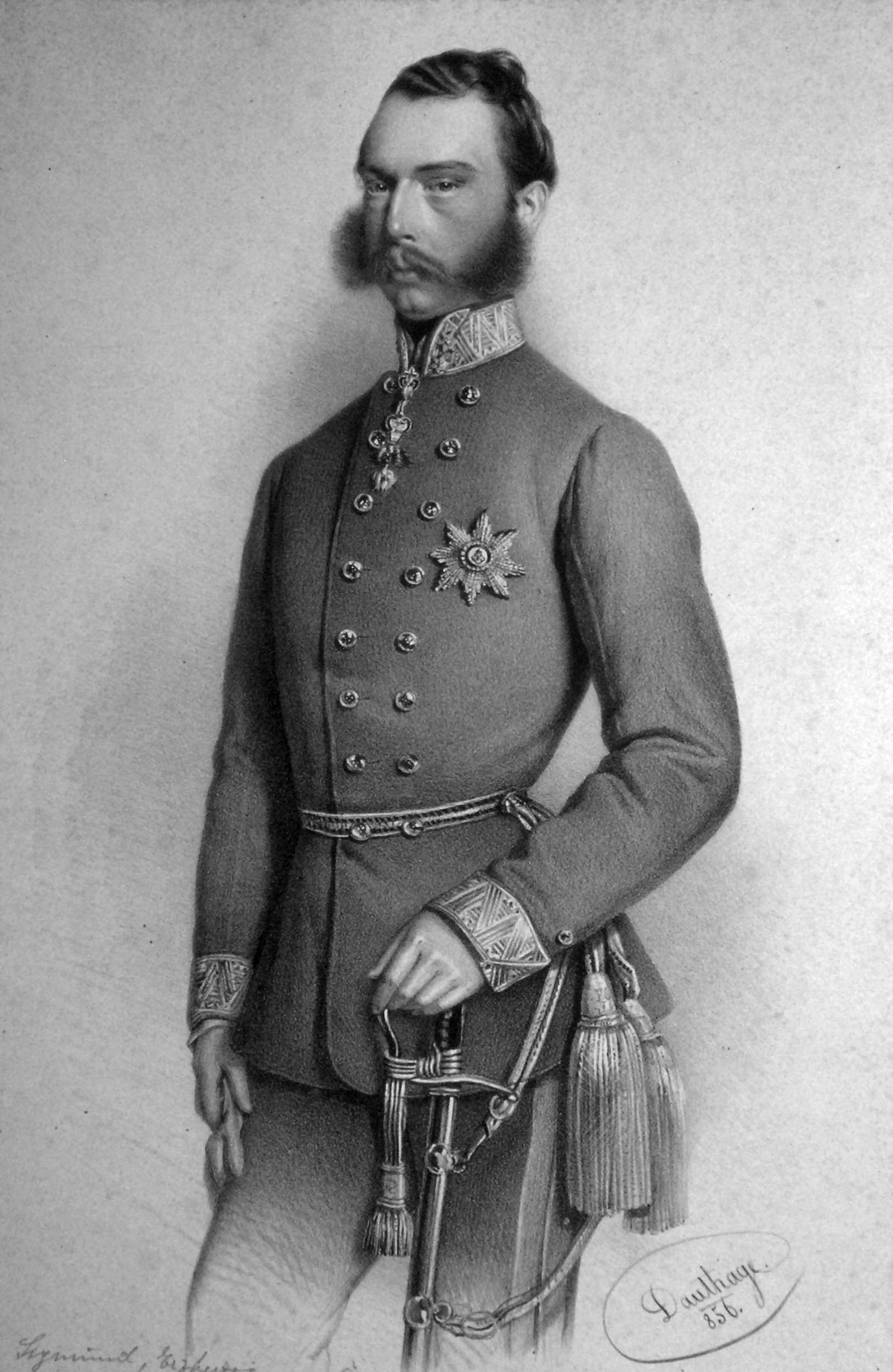 An Object from the Habsburg Estate

The rare off-metal strike in gold of the Three Emperors Issue, which was certainly made for an important historical figure, gains additional significance due to its provenance. It stems from the estate of Sigismund of Austria (1826-1891). Sigismund was a private scholar, as there were many in the 19th century. He was interested in botany, but also in numismatics. His collection was sold by the Adolph Hess Nach. auction house in 1933.

Mark Salton was particularly proud of owning this coin, and its new owner surely will feel the same.