The Liberator: Augustus the Younger and His Bell Talers

On 14 September 1643, the imperial troops withdrew from the fortress and the ducal seat of Brunswick. The imperial army lost this important location as a result of the separate peace concluded between Emperor Ferdinand III and the Welfs. The Brunswick people were the winners of the agreement: the withdrawal freed them from quartering, special taxes and all the annoying side effects that come with a hostile army being present in your city. They owed this freedom to their new ruler, Augustus the Younger. The latter celebrated his efforts in the service of the city with an extensive coin series. Numismatists usually refer to these pieces as “glockentaler” (bell talers) although – as is to be expected from a series of showpieces – the issue did not only comprise talers but pieces of many different denominations. 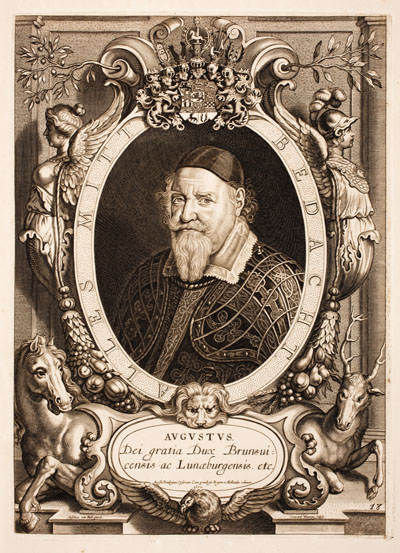 Augustus the Younger and His Cultural Assets

When Augustus the Younger took office, he was anything but readily accepted by his subjects. After all, he had faced six competitors in the diplomatic struggle to succeed Frederick Ulrich of Brunswick-Wolfenbüttel – and he had done so as an outsider: as the seventh and last child of Henry of Brunswick-Dannenberg, his position was more than weak from a legal point of view; on the other hand, Augustus the Younger had extensive cultural assets. And that was quite important in the 17th century. An illustrious author and owner of a widely praised library, Augustus the Younger was a man whose acquaintance was sought and cultivated by anyone who wanted to be considered educated.

Although Hitzacker, where Augustus the Younger resided, was nothing but a fishing village on the Elbe River with a population of only 500 inhabitants, his messengers brought letters from his peers throughout the whole Holy Roman Empire. An important part of his networking was being a member of the Fruitbearing Society, which was probably the most exclusive association of the educated nobility in the 16th century. This society had been founded by Protestant princes in 1617, on the eve of the Thirty Years’ War. Its goal was to establish the German language as the standard language, eliminating the Latin of the Catholic Church and the French of the diplomatic world. In 1632, Augustus the Younger was admitted to this society. Like all members, he was given an honorary name: the Liberator.

Thus, Augustus had numerous allies among Europe’s princes and, especially, among their educated counselors who were quite willing to use their influence to help him get the title despite his weak legal position. Even the Catholic Emperor Ferdinand II was willing to support him. Augustus the Younger became a duke by means of a contract of inheritance of 14 December 1635. But, for the time being, he could not enter his ducal seat. It had been occupied by imperial troops since 1627. A military attempt to reconquer the city had miserably failed at the beginning of 1642. Thus, his primary political goal was to liberate Wolfenbüttel. 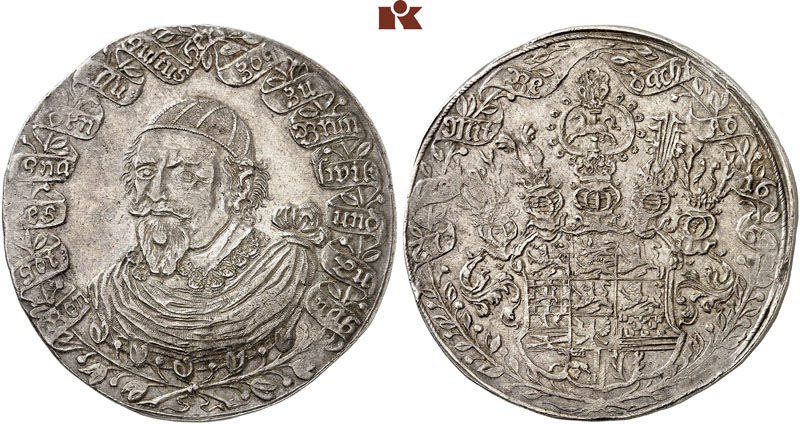 A prerequisite for liberating Wolfenbüttel was to conclude a separate peace between the Welfs and the Emperor. Negotiations about this matter had been taking place in Goslar since 1641. Did Octavio Piccolomini’s being appointed a member of the Fruitbearing Society in 1641 have anything to do with this? After all, Octavio Piccolomini was a Catholic and one of the most important commanders of Emperor Ferdinand III. In any case, the negotiating parties signed the Goslar Accord in the April of 1642. The treaty stipulated that the Welfs refrained from further military operations, and the Emperor promised to give back the ducal seat of Wolfenbüttel. However, at the end of the Thirty Years’ War, quarters where the troops could be supplied were very rare and extremely valuable. Therefore, negotiations about the withdrawal of the imperial troops from Wolfenbüttel continued.

The culture-loving duke kept numismatic records of these negotiations. His bell talers are comments that refer to the epithet of Duke Augustus the Younger: we witness the Liberator carrying out the liberation of Wolfenbüttel.

Are There Seven or Only Four Bell Talers?

The files of the ducal administration paint an impressive picture of how actively the duke was involved in the design of the coins. He laid down legends, sketched designs and had patterns sent to him to check whether his instructions had been carried out to the letter. We know that Augustus did not only mention his new coins in his correspondence but also sent along designs and commented on them. The surviving correspondence with the Württemberg theologian Johann Valentin Andreae and his memoirs bear witness to this. For Andreae took pride in the fact that Augustus added a fourth type to the three planned types of bell talers upon his advice.

This shows us that the much more detailed subdivision into seven different coin types adopted by numismatists falsifies historical facts. We must assume that there were four coin types, which were issued at four different steps in the negotiation process and the withdrawal, and which can be divided into different varieties based on the details that were changed according to the requests made by Duke Augustus the Younger.

The Negotiations – A Bell Without Clapper

The first three varieties of the bell taler, which – according to archival sources – were created at the end of 1642, i.e. during the negotiations, depict a bell as a symbol of the city’s freedom. The town bell in the town hall summoned all citizens to court and election meetings; and if it remained silent, there was no autonomy. The missing clapper illustrates that the town bell was forced to remain silent during the imperial occupation.

The meaning of the two varieties of the legend SIC NISI and UTI SIC NISI has been explained by Duke Augustus himself: like a bell without clapper, the negotiations of Salder, Goslar and Brunswick are worthless if the results are not implemented.

However, there is no contemporary interpretation of the letters TSGEB that can be seen on the bell. Later numismatists tried to make different sentences out of them, all of them implying that the withdrawal of the imperial army from Brunswick was to take place at some point in the future. 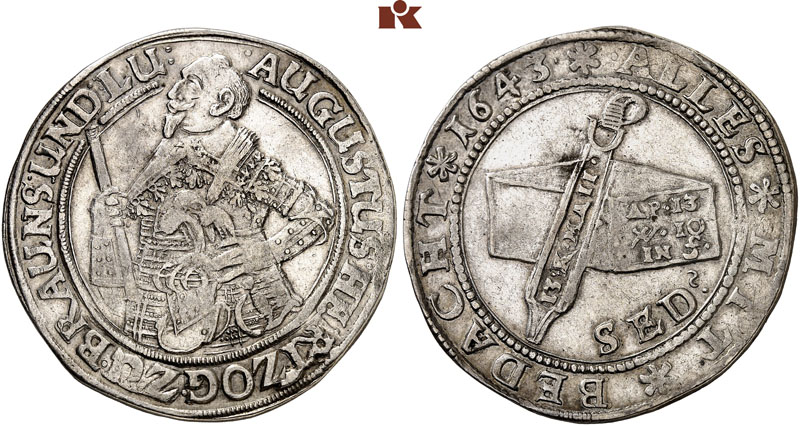 The Breakthrough – A Clapper on the Cornerstone

On 19 April 1643, the Duke and the Emperor concluded the Brunswick Treaty, which specified the details of the handover of Wolfenbüttel. We can find this date on the clapper, even though it is depicted in a coded manner. By using the Roman version “XIII Kal. of May”, Duke Augustus once again demonstrated his education.

His knowledge is also expressed by the biblical quote that adorns the front of the stone. The end of Revelation 13:10 reads as follows: here is the patience and the faith of the saints!

And from a letter from the duke to the theologian Johann Valentin Andreae we know what the Latin question “SED?” is supposed to mean. It must be read in the context of the biblical quote: When will Wolfenbüttel finally be handed over? Here we need patience and faith!

And what is the cornerstone supposed to mean? Nobody seems to have thought about that yet. One might think of the biblical saying according to which “the stone that the builders rejected has become the cornerstone” (Psalm 118:22), i.e. the outsider Augustus the Younger became the basis of Wolfenbüttel’s freedom through his negotiations. 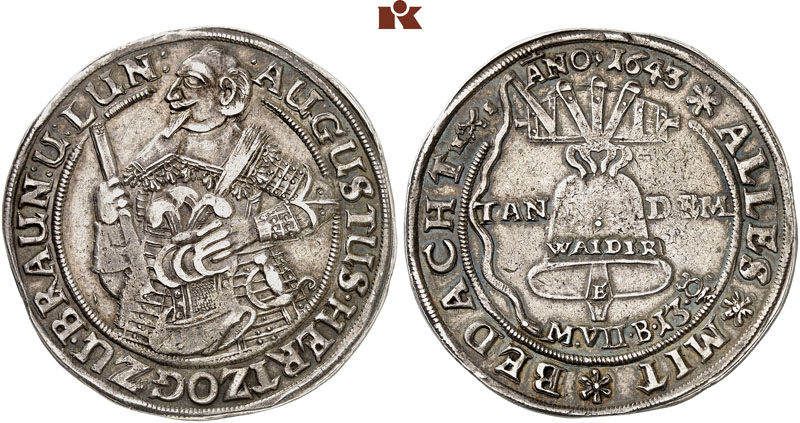 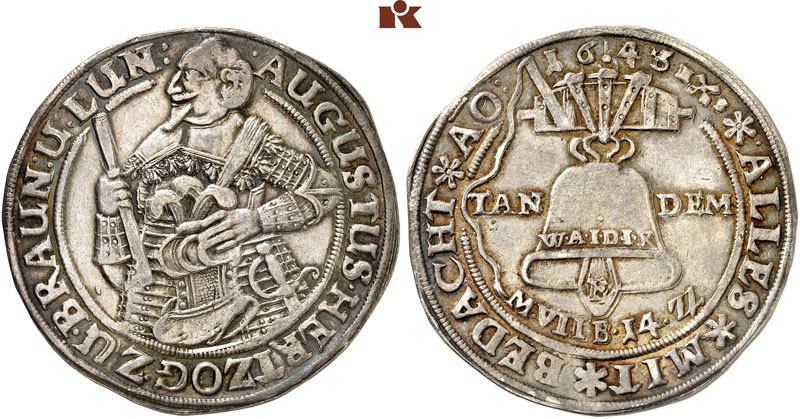 The Withdrawal – A Bell with Clapper

TANDEM – finally! This is what you can read on the third type of the bell taler, which was minted on the occasion of the withdrawal of the imperial troops. We know what the letters on the bell mean from a letter written by Duke Augustus to Andreae. “On 16 September 1643 he wrote: last Thursday, on the Feast of the Exaltation of the Cross, the 14th day of the month, the wrongful occupiers finally – albeit reluctantly – departed.” This sentence, written in early New High German, contains some Latin phrases that numismatists traditionally use to understand the meaning of the letters on the bell: Wolfenbüttelum Ab Injustis Detentoribus Invite Restituitur (= Wolfenbüttel is given back by the wrongful occupants against their will).

The duke himself explains what the E on the clapper refers to. It stands for EXECUTIO (= execution).

We know from a letter – this time one of the mint master – why this taler type was minted with two different dates. The departure of the imperial troops had been planned for 13 September 1643, then it turned out that they could only leave on 14 September. The mint master thus asked whether he should change the coin dies. 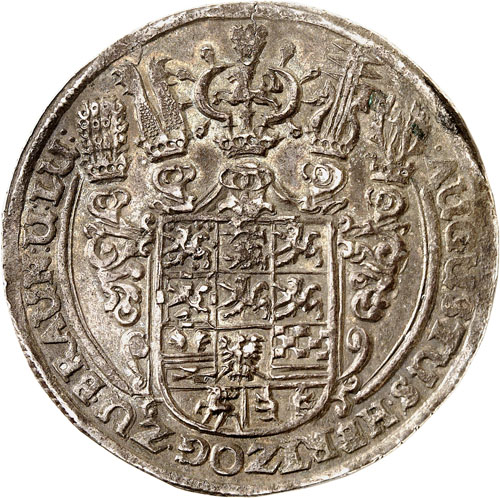 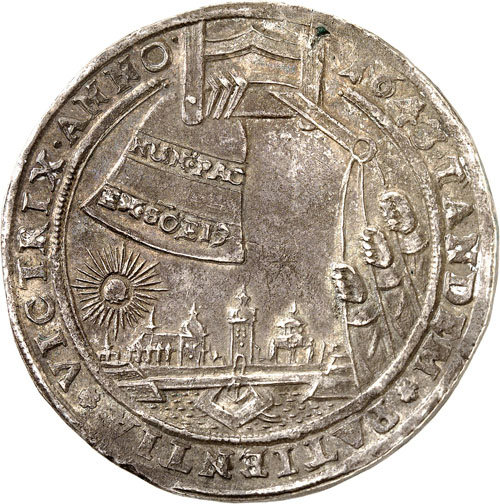 Patience is victorious at last – this is how the legend of the last taler type celebrates Wolfenbüttel’s freedom. It depicts the ringing bell, on which an abbreviated Latin inscription proclaims that the sound of the bell spreads the message of peace. Might this be the coin type of which the theologian Andreae thinks that he inspired it? After all, on 20 September 1643, he sent the duke a poem of his own composition praising the duke for the liberation of Wolfenbüttel, translating the images used on the bell talers into words – which, by the way, other well-wishers also did in their letters. The illustrations of the bell talers seem to have already been widely known among educated contemporaries.

Did the duke issue a modified version of the original bell talers, which show a bell without clapper, once again at the time of the withdrawal? After all, we know pieces of this type on which the world GLORIA was subsequently engraved or cut into a modified die. 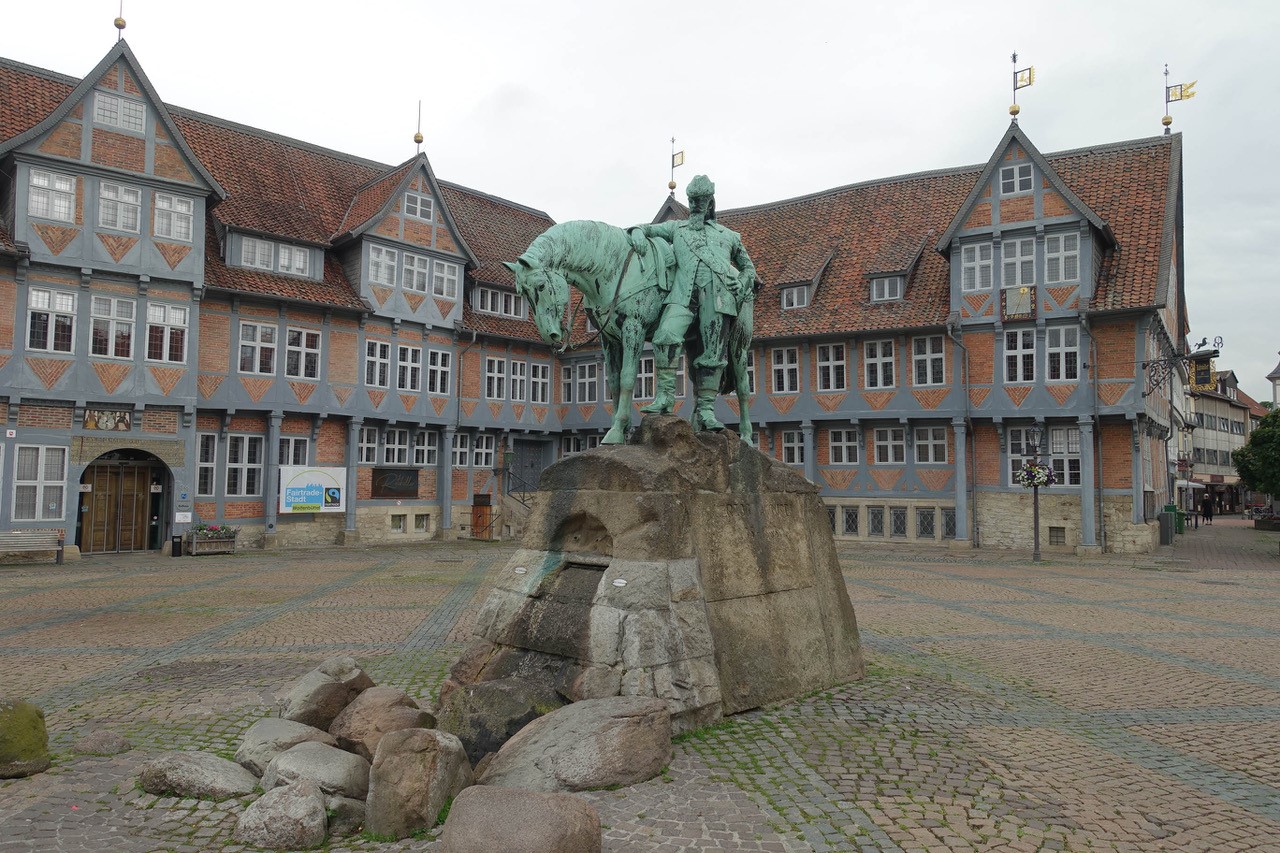 Monument for Duke Augustus on the market square of Wolfenbüttel from 1904. Photo: KW

Even those who travel to Wolfenbüttel today cannot avoid Duke Augustus the Younger. The most famous sight of Wolfenbüttel is the Herzog August Library, which had already been celebrated as the eighth wonder of the world during the lifetime of its founder.

What might be even more remarkable is the fact that Duke Augustus the Younger had earned the loyalty of his subjects by liberating Wolfenbüttel in such a way that he was chosen when, in the early 20th century, it was discussed to whom a monument was to be erected on Wolfenbüttel’s main square.