The Last Coins of Independent Syracuse

The year is 214 BC. Hannibal keeps the Romans on their toes. Only two years earlier, he had practically wiped out the Roman army in the Battle of Cannae. It is said that one third of the entire Roman leadership class died in the battle. The ancient world was shaken to its core. This is the only way to explain the fact that even the trading city of Syracuse seriously considered a change of allies. The city had faithfully stood by the side of the Roman Republic since 263 BC. Rome honored this by granting Syracuse a special legal status. The Roman proconsul of Sicily had no power there.

But then old Hiero II died. His grandson Hieronymus ascended the throne, and the 15-year-old found a war hero like Hannibal far more impressive than Roman senators who were losing battle after battle at the time. At the beginning of 214 he sent envoys to Hannibal, and they forged an alliance in his name. Hieronymus planned to expand his own empire in Hannibal’s shadow. But before his army, which was assembled in Leontinoi, could start the planned campaign to Messina, Hieronymus fell victim to an assassination. As a result, a civil war almost broke out in Syracuse. 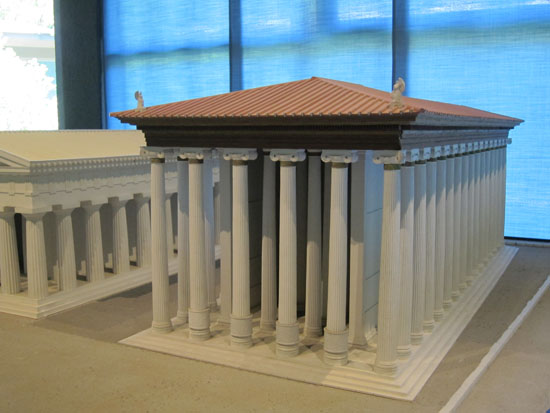 In the foreground, the temple of Artemis, in the background that of Athena, both shared this sacred precinct. Model in the Archaeological Museum of Syracuse. Photo: KW

Between Peace and War

We tend to forget that – even in antiquity – people with different interests and different values lived in the same cities. Thus, after the murder of Hieronymus, the Syracusans fiercely argued about whether to form an alliance with Carthage or with Rome. Those who backed Rome sought to talk with the Roman consul Marcus Claudius Marcellus. But their efforts did not result in anything. The army in Leontinoi ruined the peace negotiations.

The reason for this was that the young soldiers went on profitable raids throughout the Roman territory, thinking of themselves as being extremely heroic. And the Roman proconsul Marcus Claudius Marcellus obviously could not and would not tolerate this. He ordered his army to attack Leontinoi and his legionnaires took the city by storm. Many Syracusans died defending Leontinoi, and many civilians were killed in the looting that followed. By doing so, the consul naturally aroused the anger of the Syracusans, and the number of those in favor of an alliance with Rome shrunk drastically. An election held in the winter of 214/3 placed two of Hannibal’s envoys at the head of the city, and they used this strategic office to open a second front against Rome in Sicily.

A Coin Series to Finance the Fight against Rome

Somewhere in this context, an extensive series of Syracusan coins was issued that don’t show a ruler’s portrait on the obverse but the most important gods of the city. We can assume that the coins’ main purpose was to pay the wages of soldiers so that they could pay for their food instead of stealing it. For a rich and densely populated city like Syracuse, this was the only way to maintain peace while a large army was present.

In the context of the Dr Guy Sylvain Paul Bastin Collection, which will be on offer in auction 367 on 6 April 2022, we are able to present three different denominations from this series, some of which are extremely rare. 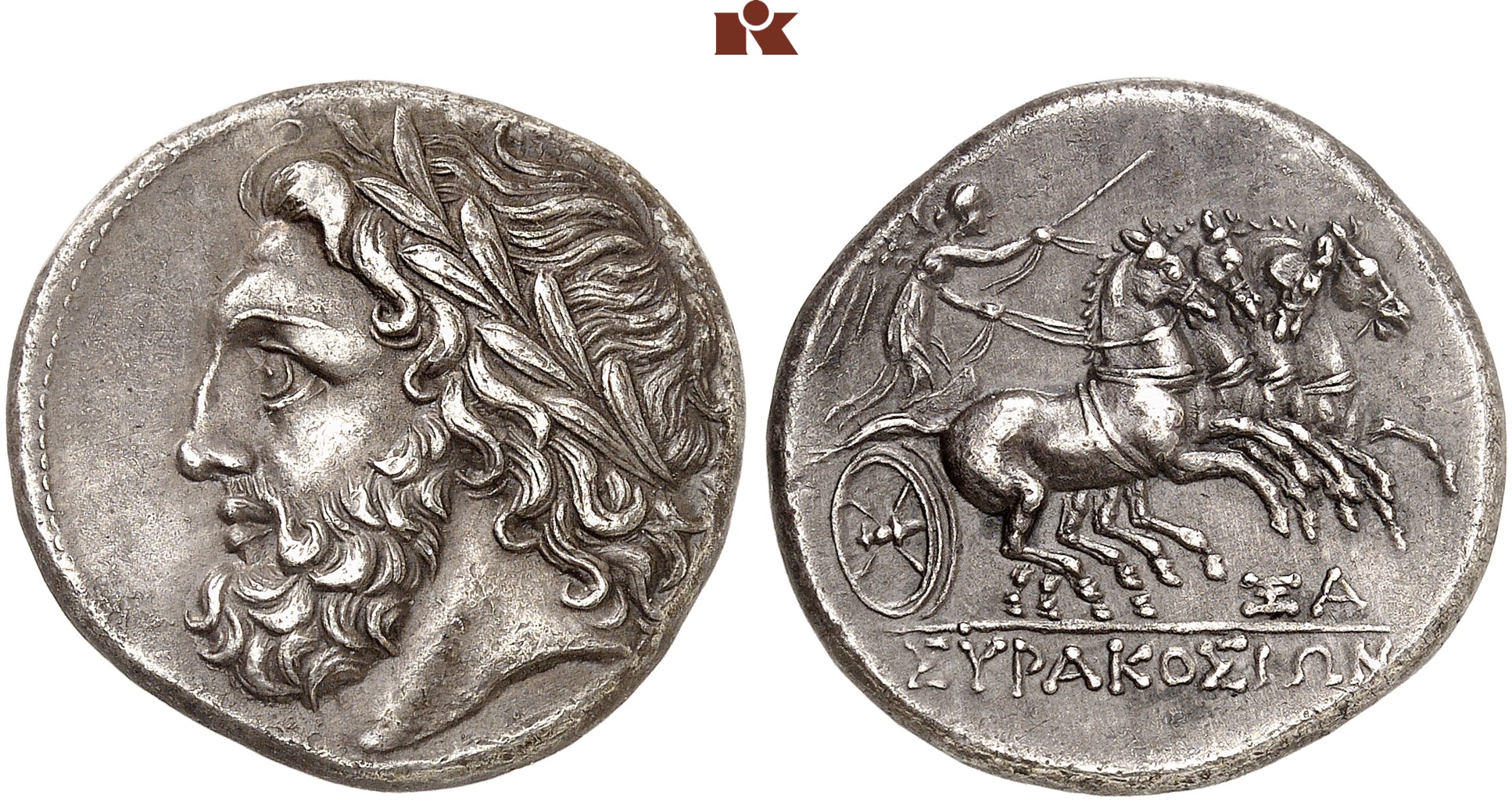 Undoubtedly, the engraver who created the dies for this 16 litrae piece was among the many particularly gifted artists of Syracuse. The obverse depicts the monumental face of Zeus, for whom the Syracusans had built a temple a little outside the city proper. They worshipped Zeus as Olympios, recalling that priests from Olympia had accompanied the first settlers on their journey into the unknown. Therefore, the reverse presents a victorious quadriga – an allusion that has been known since the beginnings of the city’s coinage history and that represents Syracuse’s regular participation in the chariot races of the Olympic Games. 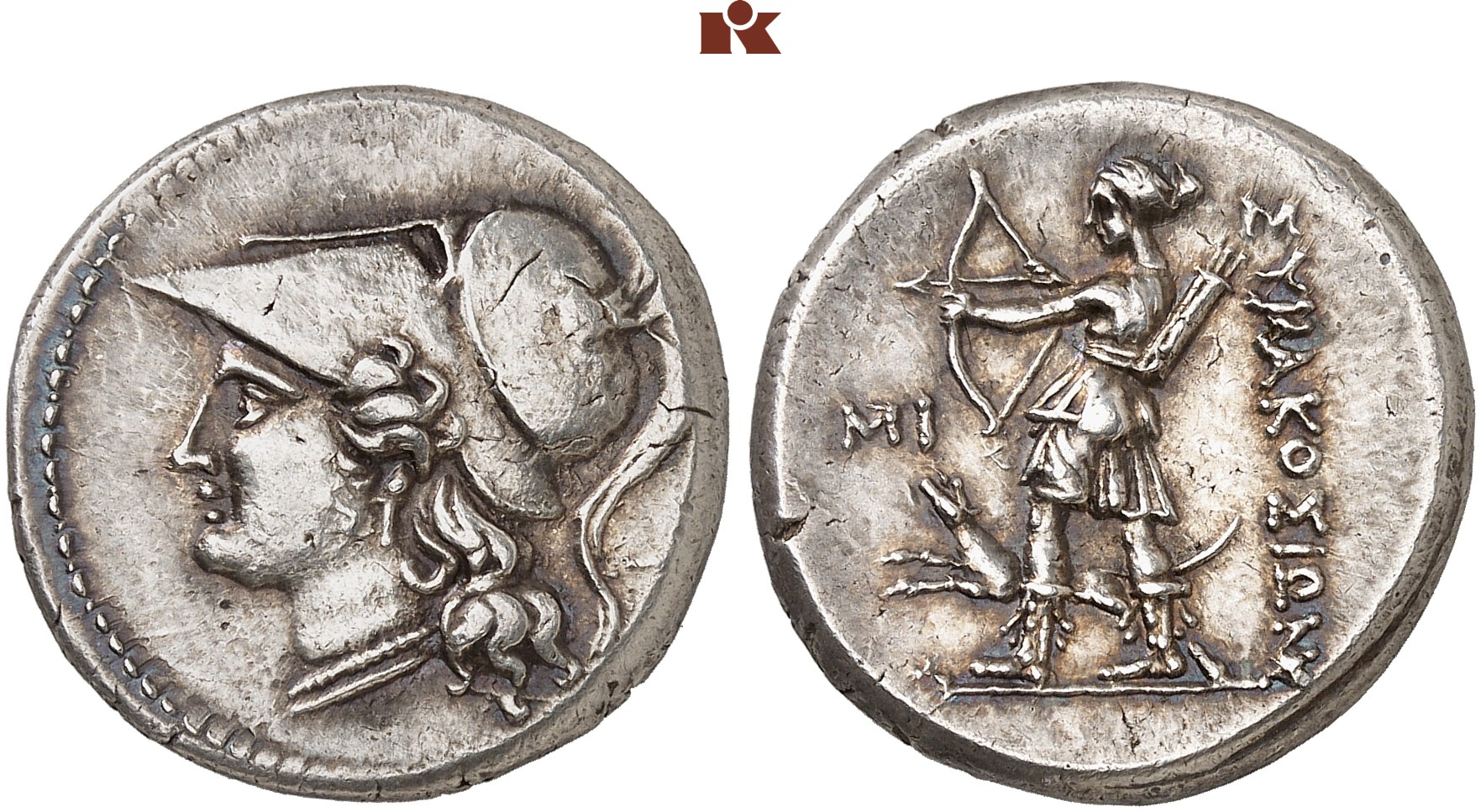 The 12 litrae piece was the most frequently struck denomination of this issue. Whereas only three different obverse dies were used to mint the 16 litrae pieces, at least 14 dies were created for the 12 litrae coins, as Andrew Burnett discovered in his die study. 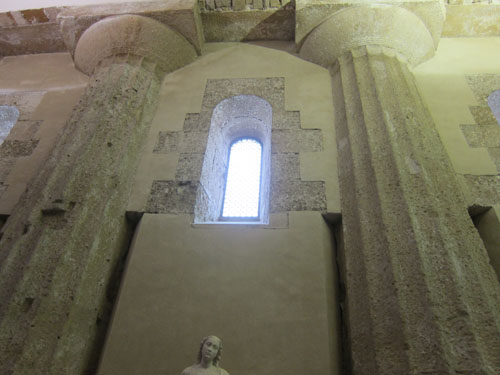 The Cathedral of Syracuse was built into the temple of Athena. The Doric columns are still clearly visible. Photo: KW

Athena and Artemis were both important deities in Syracuse. Anyone who has ever visited the city will remember how impressive it was to see that the columns of the old temple of Athena are still a visible part of the masonry of today’s cathedral. Artemis shared the sacred precinct with Athena. She had an elegant Ionic temple right next to it. This geographical proximity is numismatically reflected by this coin. 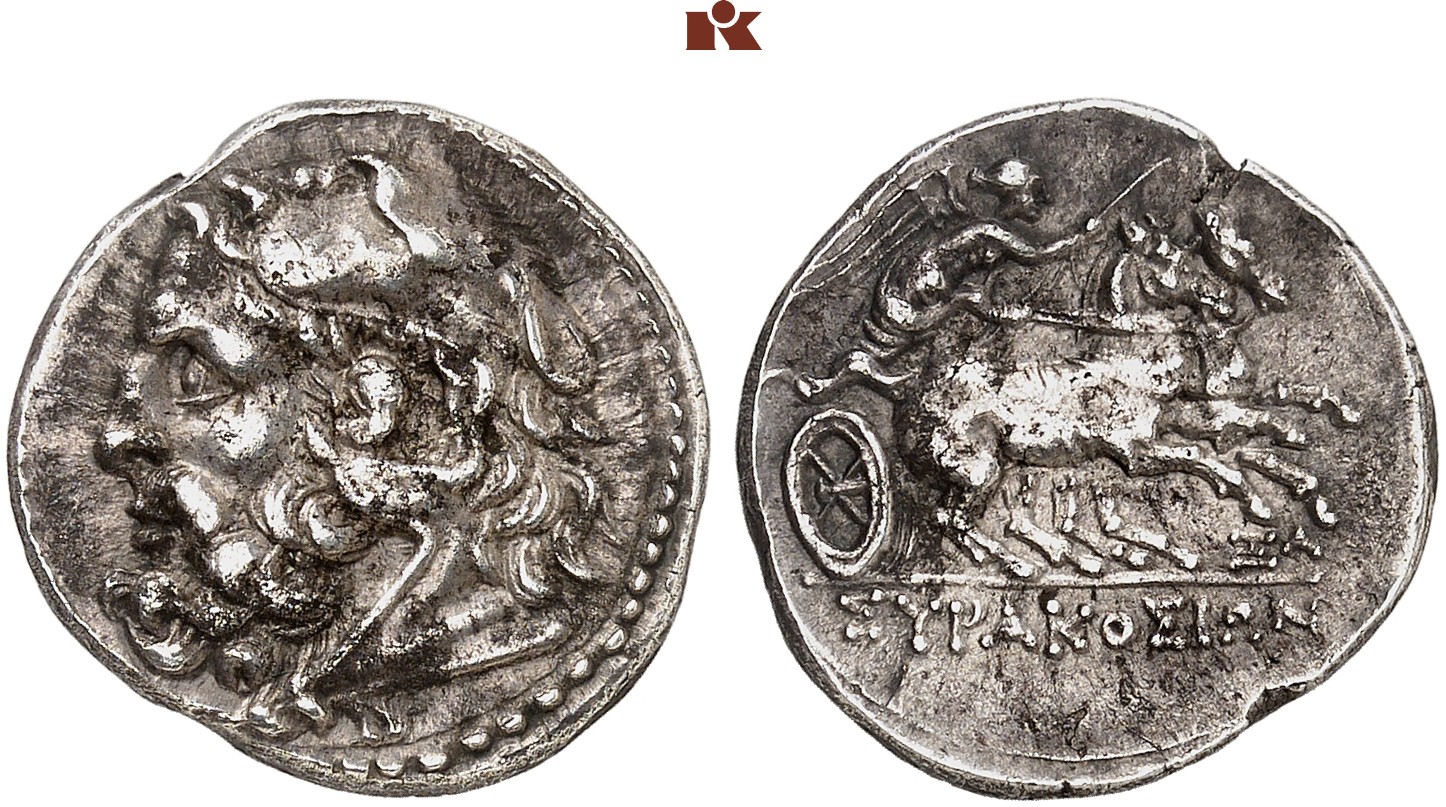 Nine obverse dies exist for the 6 litrae piece, which shows Heracles on the obverse and a biga driven by Nike on the reverse. A local myth links Heracles to the spring of Cyane, which – although Arethusa is much better known – played an important role in the religious calendar of the Syracusans. 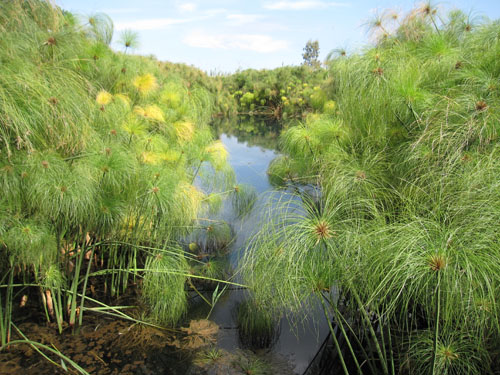 The spring of Cyane. Photo: KW

While travelling through Sicily, Heracles is said to have determined how this festival was to be celebrated: the ox that is sacrificed on the occasion should not be slaughtered as usual but be led into the water to drown there. We know from Cicero’s speech against Verres that this feast was still celebrated in Roman times.

Archimedes and the Siege of Syracuse

And this brings us to the catastrophe caused by the Syracusans’ change of allies. Syracuse relied on its walls, which were considered unconquerable. Marcellus attacked the city anyway. And wasted his men in an unreasonable assault.

At this point, historians always talk about the brilliant mathematician Archimedes, whose war machines are said to have caused many Romans to lose their lives. Apparently, it was easier for Romans to blame the failure and the many deaths on a genius than to deal with the fact that their proconsul had calmly stood by for decades while Syracuse became increasingly unassailable. We can be quite sure that the city walls were the main reason why an immediate conquest of the city failed, however interesting Archimedes’ throwing machines and grappling cranes may have been.

The Death of Archimedes – and of Many of His Fellow Citizens

The plan of Hannibal’s envoys worked: Rome divided its forces and Sicily became a new supply base for Hannibal. In the late autumn of 213, a large part of the island was in his hands, but this did not keep Marcellus from besieging Syracuse.

He patiently waited until an opportunity presented itself. It was easy to find out when the Syracusans celebrated their festivals. And it was also common knowledge that large quantities of wine were drunk during the annual Artemis festival. Marcellus took advantage of this. He sent shock troops to climb an unguarded section of the massive city wall and to open the Hexapylon gate to let the entire army in. But this was just the first city wall. The actual city center had its own fortifications. 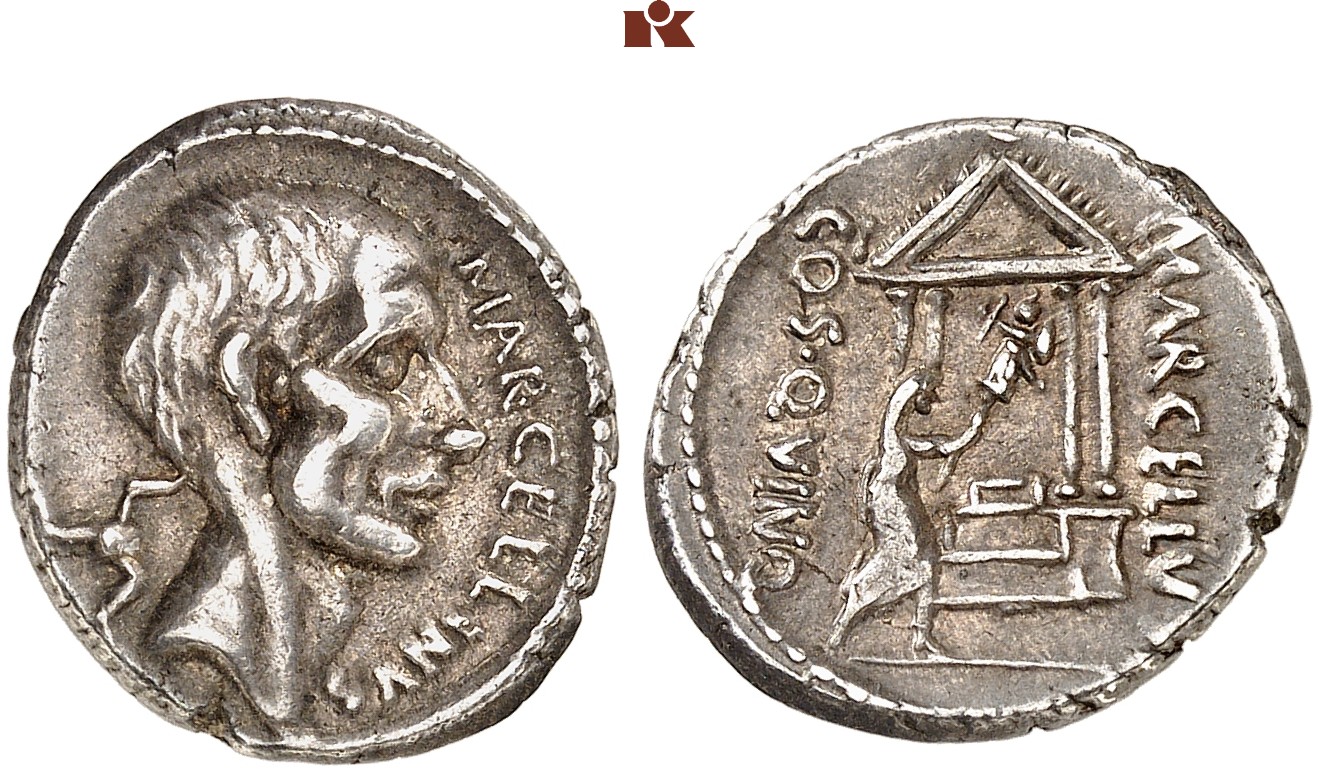 P. Cornelius Lentulus Marcellinus. Denarius, 50 BC. Rare. Very fine +. Estimate: 500 euros. From Künker Auction 367 (6 April 2022), No. 7868 – The depiction of the triskeles behind the portrait of another member of the Marcelli family recalls the conquest of Syracuse, while the reverse commemorates the heroic deeds of Marcus Claudius Marcellus, which he is said to have performed in the battle against the Insubres.

So the siege continued, and it continued until the Carthaginians gradually fell behind throughout Sicily. As soon as the Syracusans realized that they could no longer expect anything from their allies, they sent messengers to Marcellus. But he did not react. He was the victor. And when an Iberian mercenary leader opened him a gate to the island fortress of Ortygia, he sent a small group of soldiers to bring him the Syracusan treasury and let his army loot the rest of the city.

Thanks to Livius we have a detailed description of the horrors that followed. The ancient world did not know international law or the concept of protecting civilians. This is the context of Archimedes’ death and the well-known quote: “Do not disturb my circles.” Did he actually say that? Who knows. Se non è vero è ben trovato.

Perhaps Archimedes is also a symbol for the Roman grief about having destroyed one of the greatest homes of art and culture that ancient Greece had produced.

The creative power that Syracuse was able to mobilize before the siege, even in 214 BC, is not only shown by Archimedes’ inventions but also by the magnificent 16 litrae piece with the head of Zeus, which can certainly stand comparison with the best works of classical art.