The Battle of Poltava 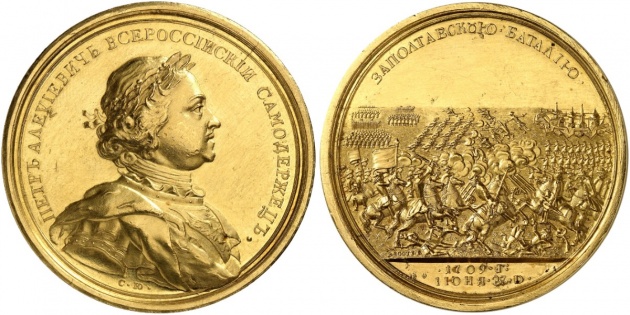 Lot 714:
Gold medal on the Battle of Poltava, 1760, based on the original medal of 1709.
This specimen in extremely fine condition, which will be auctioned off on February 4th, 2016
at the Künker Berlin Auction, is estimated with 20,000 euros.

Charles XII had already lost the battle of Poltava in the course of the winter of 1708/1709. This is when his army was marching through Russia. There, it was cold, much colder than the Swedes had imagined. Their clothes were insufficient and their supplies non existent. Charles set off with 60,000 men and by early spring only every second man was still alive. But what was worse, in military terms, were the deaths of the horses. They transported the artillery. Without them, Charles had to leave the majority of his cannons behind.

And for that, he had to pay the price at Poltava, which he started to lay siege on in the beginning of April of 1709. Because he was missing gun powder, ammunition and cannons, he was not able to launch an artillery barrage. This gave Peter time to bring the Russian army closer: 42,500 men with 102 cannons. A powerful opponent was created and even Charles acknowledged that. He hesitated to attack. And again, the Russians used the time to fortify their position by building trenches. The Swedes were caught between the fortress of Poltava and the Russian camp.

Charles must have been pretty desperate when he saw all this on one of his survey trips. Plus he sustained a bad injury, the first the young man ever endured. His left foot was shattered by a bullet. Nonetheless, he called an attack.

When the Swedish soldiers attacked on July 8th, 1709, at 2 in the morning they ran straight into a trap. Peter’s scouts had reported the movements of the enemy troops. No more surprise effect. The Swedes were pushed back and the Russians started to form their combat formation.

It was nine in the morning when the real battle began. The Russian front was about 500 meters longer than the Swedish - that’s how predominant their position was. But still, instead of calling for retreat, Charles called for an attack from his sick bed. Perhaps, having been a successful army general so far, he just could not imagine defeat.

Peter lead the counter attack himself and got so close to enemy fire, that a bullet struck his hat.

Many Swedish soldiers would have been happy, if a bullet would have only caught their hats. They were cannon fodder for the Russian artillery. It is this moment that we see on the medal, which will go over the auction block on February 4th, 2016 at the Künker Berlin-Auction: the artillery takes over the battle field. Commanded by Russian generals - Peter himself, on a rearing horse, is shown in the center of action – musketeers and cannons are firing away. While more and more Russians are marching towards the scene, there is only a small number of enemies visible, shot dead on the ground.

How many Swedes died? Nobody counted them and the numbers vary. What is certain, is that it were many more than the 1,345 dead Russians on the battle field. A great number of Swedish soldiers also were taken prisoner. On the night of the battle, Peter held a great banquet for them, during which he called his guests great teachers on the subject of the art of war.

Charles XII had fled. He stayed in exile in the Ottoman Empire for six years. The Nordic War still was not over, but an important turn of events had taken place, which favored Russia.

The victory at Poltava was decisive for the self-esteem of Russia. Therefore, it was publicly celebrated. That is also why for centuries every Russian coin collector wanted to own one of the medals which was handed to the officers who took part in the battle. At first, they were re-struck with the original dies, but when the dies were too worn Catherine II ordered to produce new dies after the design of the originals. The reverse of the new dies was cut by the Englishman Benjamin Scott, who, between 1748 and 1761, was working in Russia. His student, Samoil Judin, was responsible for the obverse. Finally, about 1760, the medal was struck.

It not only displays a great Russian military achievement, but also represents the commitment of Russian coin collectors, who, for centuries, have been proud to own a medal, which commemorates one of the biggest victories of a Russian Czar.