On February 6th, 2016, 42 Chinese coin dies and 36 punches from the holdings of Otto Beh’s company will be handed over to the state coin cabinet of Saxony-Anhalt. They attest to an exciting chapter of German history of technology.

When Theodor Choulant, mint master of Muldenhütten, visited Louis Schuler’s machine factory in Göppingen in April of 1905, he was able to admire the latest minting machines, which were just assembled to be shipped off to China. In his official report, he writes:

“Upon request, one of the 29 minting machines was turned on. It functioned flawless and in comparison to the “Uhlhorn” machines, its die onset was easier and faster. Furthermore, similar to the Berlin minting machines from Naumann, they feature an automated disengaging mechanism in case that 2 or no planchet comes under the dies. The price of one such a machine is 6,000 marks.”

At the time, Schuler of Göppingen was market leader with international connections – and it stayed that way till today. In part, this was achieved by Schuler cooperating with other local companies in order to produce complete packages. Otto Beh, who, since October 17th of 1884 operated a shop for sophisticated engraving in Esslingen, was most likely commissioned to produce dies for trial strikes in connection with a minting press delivery to China. 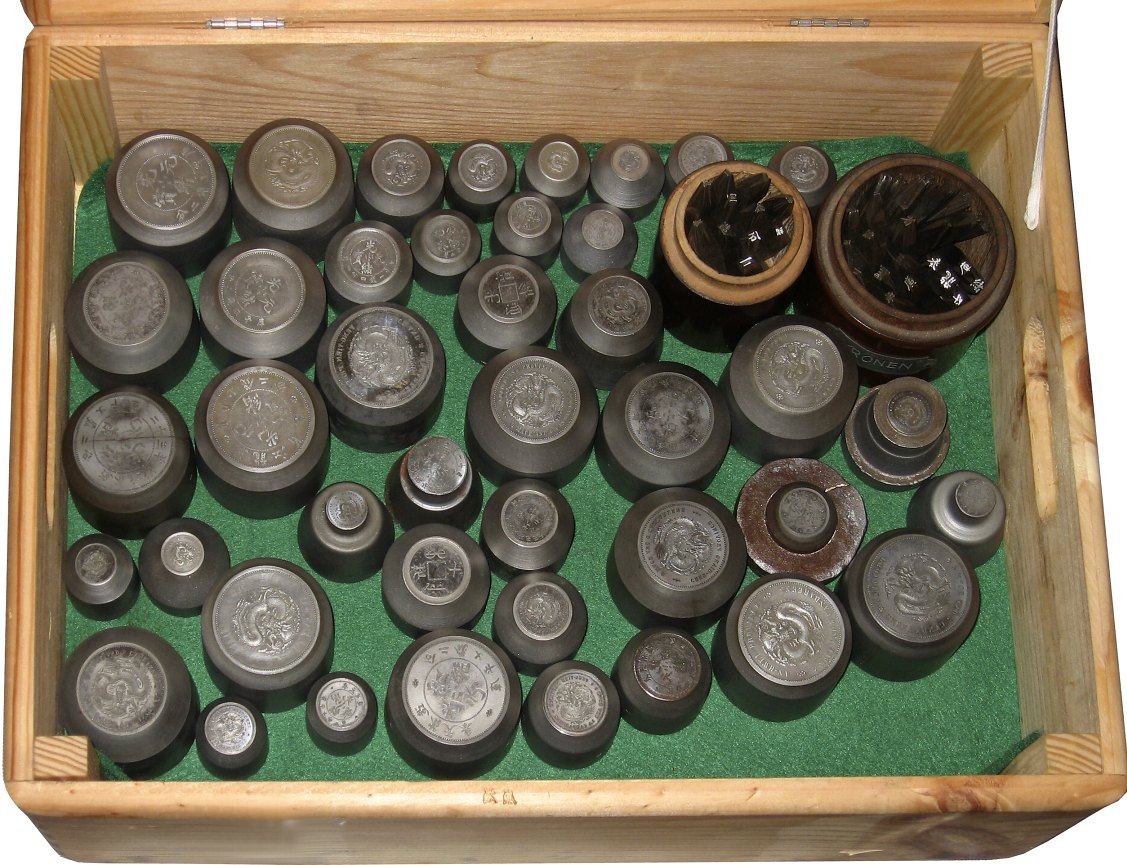 It was a coincidence that these dies were preserved. All together, there are 42 coin dies, produced for the following Provinces: Anhwei, Chekiang, Fengtien (Fungtien), Heilungkiang and Sin Kiang (Sungarai). Additionally, there are also 36 punches, which could be used to strike Chinese letters onto the dies.

Originally, this convolute was supposed to be auctioned off on July 18th, 2011 at Künker Auction 211. But out of responsibility, Künker withdrew the dies, from which only a few trial pieces exist. Criminal intentions had to be averted, because trial pieces of dies of the Otto Beh company belong to the great rarities in Chinese numismatics and are routinely awarded with prices in the 5-digit euro region at auctions. Together with Michael Hans Chou, owner of Champion auction house in Hong Kong, Künker convinced the owner to not sell the dies. In order to prevent misuse, the coin striking tools were marked by laser engraving by Foba of Lüdenscheid, which made them unusable for the production of counterfeits.

Because of their important historic significance the tools were to be given to a museum. In cooperation with Michael Hans Chou, Künker auction house decided to hand the dies and punches to the art museum Moritzburg in the city of Halle (Saale). It already gave a home to an extraordinary collection of Chinese coins, which is the second largest in Germany, and it pursues an interesting concept to mediate the history of money. Additionally, it is also in charge of a unique museum of coin technology in Stolberg (Harz). The state coin cabinet of Saxony-Anhalt, part of the art museum Moritzburg Halle, will receive the dies and punches under the condition to include them in a permanent exhibit. But first, they will be part of a special exhibit about the history of Chinese coins and currency, opening on September 17th, 2016.

In a celebratory ceremony on February 6th, 2016, at the World Money Fair in Berlin, Michael Chou and Ulrich Künker will be handing over these extraordinary pieces to Dr Christian Philippsen, director of the Foundation of Domes and Castles of Saxony-Anhalt and Ulf Dräger, chief curator of the state coin cabinet of Saxony-Anhalt. 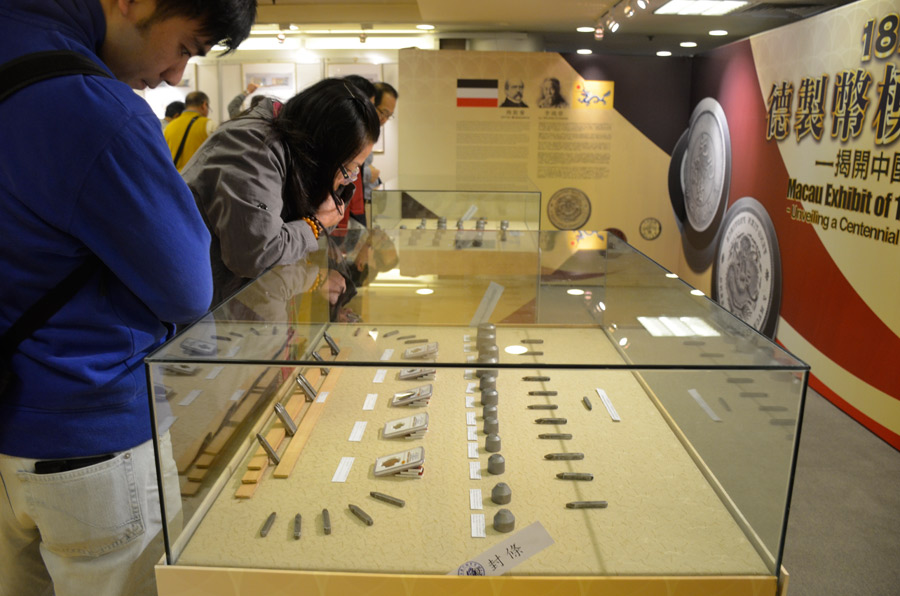 The die exhibit in Macau was visited very well.

Beforehand, the dies and punches were on display in China. In the context of the International Coins and Precious Metals Expo in Macau, they were on view for a few days in the beginning of December of 2015. The amount of visitors reflected the enormous and unusual public interest. 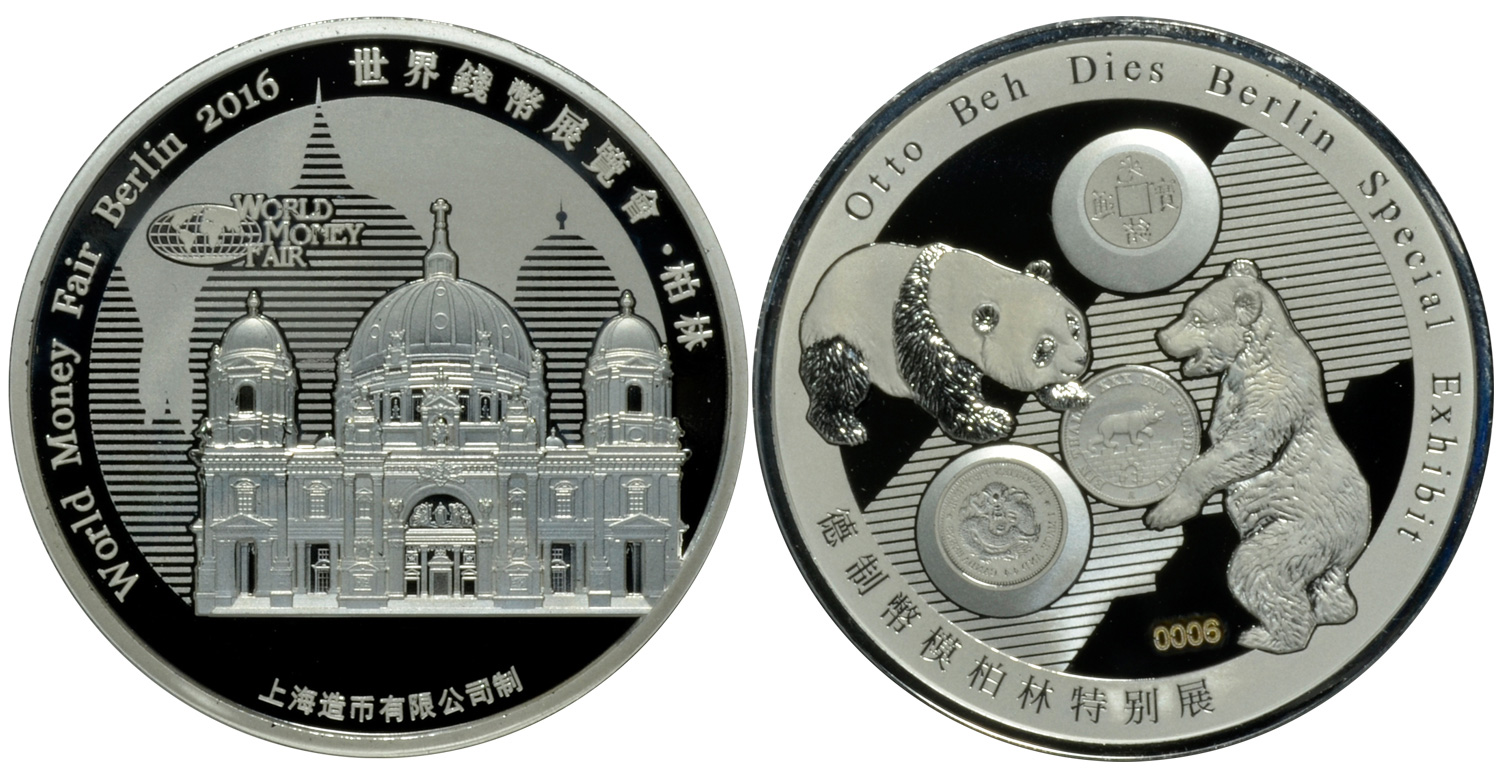 You can purchase these medals for 69 euros at booth D6 at the World Money Fair.

On this occasion, the Shanghai mint struck two Panda-medals. The first commemorates the exhibit in Macau, where it was presented. Because of its popularity, it was quickly sold out. The second piece will be presented at the upcoming World Money Fair. On the obverse it displays the Berlin Dome and in the upper field the logo of the World Money Fair. On the reverse it displays a Chinese Panda and the Berlin Bear. Between them a coin of Anhalt is situated, which also displays a bear, as well as two of the dies, which will be handed over. This medal pays tribute to the ceremony in Berlin. The newly minted “Berlin-Panda” medals can be purchased for 69 euros at booth D6 at the World Money Fair.