No other period of the Roman Republic generated more innovative imagery than the civil war between Octavian, Marc Anthony and Sextus Pompey. During the upcoming Künker Fall Auctions of 2016 a splendid testimony to this thesis will be auctioned off. Sextus Pompey created an aureus referring to his father, Pompey the Great and his brother, Gnaeus Pompeius. 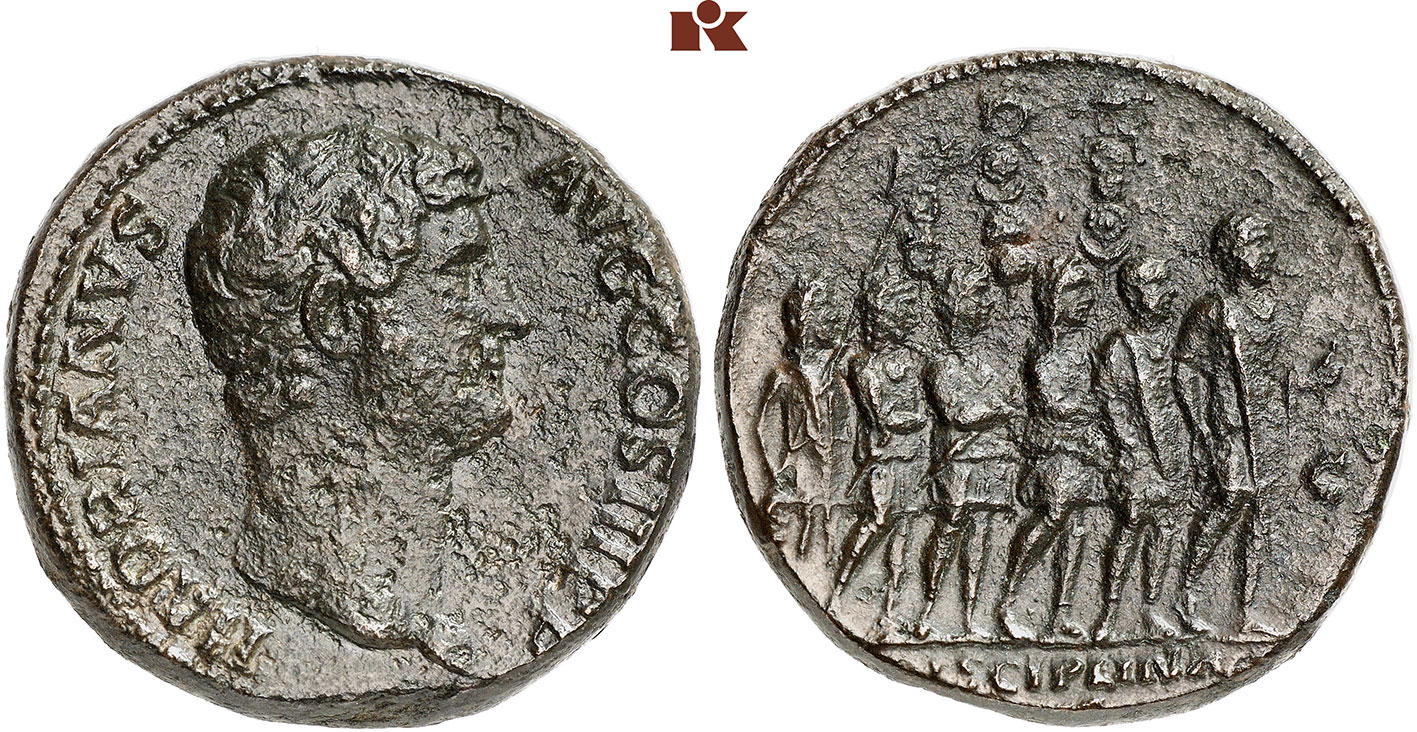 It’s a memorable coin image: It shows the portrait of a man on the obverse; he is wearing a beard, what the Romans did when mourning for an in-law or being at war. Both goes for the portrayed figure. The legend reads his name: MAG PIVS, which stands for Magnus Pius. But hold on a minute, it’s not the great adversary of Caesar, it’s his son, Sextus, which is signaled by the word “Pius” in the legend. The Romans didn’t mean devoutness when using the word pius, rather it was defined as a submission to the guidelines of their ancestors, the precise observance of their traditions. That, of course, included revenge when ones ancestors had been subject to injustice. In the eyes of Sextus Pompeius this injustice had happened to his father and brother, displayed on the reverse of the coin. Pompey the Great, to the left, was murdered during his flight to Egypt. Gnaeus Pompeius, whose portrait is placed on the opposite of his fathers’, was murdered after the Battle of Munda by a follower of Caesar.

Sextus Pompeius followed their tradition. The imagery he created for this purpose was both very traditional and very modern at the same time.

Ancestor worship was rooted deeply in Roman thinking. Every house had its own little shrine, called the lararium. That is were all dead ancestors were honored. And for that reason the shrine also included images of the dead. They were death masks made of wax, which played an important role in the mortuary practices. When an important man died, for example, there was a long procession accompanying the body. Among them were actors, who, with the help of the wax masks, transformed into dead ancestors.

It was through such death masks, many mint masters were able to produce realistic portraits of their ancestors on denarii. And if they came from prominent families, they employed this method to improve their reputation.

That’s just what Pompeius did. Brutus had done it before and of course Octavian. But Pompeius strengthened the motif by accumulating more portraits. He had his father and brother portrayed together on the reverse, in order to display himself in a larger manner and therefore as the focus point on the obverse.

Interesting are also the attributes Pompeius uses. As a sign of his father’s belonging to the priesthood of Augurs, he is combined with a lituus. By showing his brother with a tripod, he is characterized as a member of the fifteen, the quindecimviri sacris faciundis, who were responsible for the Sibylline Books.

For himself, Pompeius claims the civic crown made of oak leaves. It was awarded for the rescue of a Roman citizen from mortal danger and really is a very mean allusion, because it refers to his adversaries, Octavian and Marc Anthony and their proscriptions haveing threatened the lives of many citizens. People affected fled to Sicily under the protection of Pompeius and it was through their requests, he concluded the pact of Misenum with the triumvirs. It contained many concessions in regards to Pompeius and one of them was the end of the proscriptions, which meant all banished were able to return to Rome. Nevertheless, not long after a new war started. Neither Octavian nor Marc Anthony were willing to fulfill the concessions made.

Thus far the coin motifs. But when exactly was the piece minted? This question is a matter of intense debate. Bernhard Woytek (JNG 45 (1995), 79-94) proposes on good reasons, that the striking of the coin took place between fall of 37 and early summer of 36. The coin therefore, would be a document of the final fight between Sextus Pompeius on the one side and the triumvirs on the other.

As mentioned, the war had started again. Octavian assembled an enormous fleet in order to drive away Pompeius from Sicily. But at Messina he was devastatingly defeated. It was a storm that damaged his fleet to the extent that Octavian had to temporary abandon his plans. Pompeius celebrated this incident as a victory. He took on the title of Emperor a second time, as we can read on the coin (IMP ITER) and prepared for a new attack of Octavian. He had ships built, many ships. And for that he needed money, a lot of money. It is in this context the aureus belongs. It was minted to finance shipbuilding.

But it was all for nothing. In August of 36 the Battle of Naulochus took place. Agrippa, a friend and ally of Octavian, was able to sink or capture almost 163 of Pompeius’ ships. That was it, the war was over. Although Pompeius and a few of his faithful followers made it to Asia Minor, his power was broken. In the summer of 35 Pompeius was executed in Miletus without a trial.

Octavian, by the way, knew how to profit from this death twice: first, he would not have to worry about the grain supply of Italy anymore. And second, the ‘murder’ of Pompeius served him as yet another pretext for a civil war against his former ally Marc Anthony.