On 1 November 2016 London Coin Galleries, in cooperation with Künker, will be selling the second part of the Preussag collection of mining coins by auction in London. The collection had been put together since the 1970s under the supervision of Karl Müseler. The first part of the collection, which included, among others, 217 lösers, was already dissolved with great success in October 2015.

The second and last part of the Preussag collection – altogether 772 lots with a total estimate of 630,000 GBP – doesn’t offer quite so spectacular material, but collectors and experts in this area will still find attractive pieces. Especially collectors of German coins will be pleased. After all, the largest part of the auction with almost 600 lots comes from the German States. 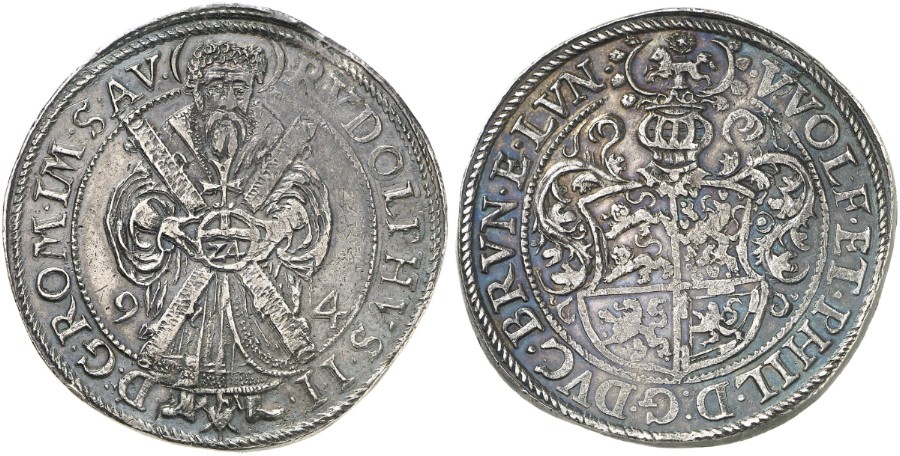 By far the most comprehensive series of 260 lots comes from the different principalities of Brunswick-Lüneburg. It begins with a series of rare reichtsthalers of the Principality of Brunswick-Grubenhagen, minted in the years between 1594 and 1596 from the yield of the St Andrew’s mine. Take, as an example, a reichsthaler of 24 groschen featuring the title of Rudolf II from 1594, graded very fine to extremely fine. 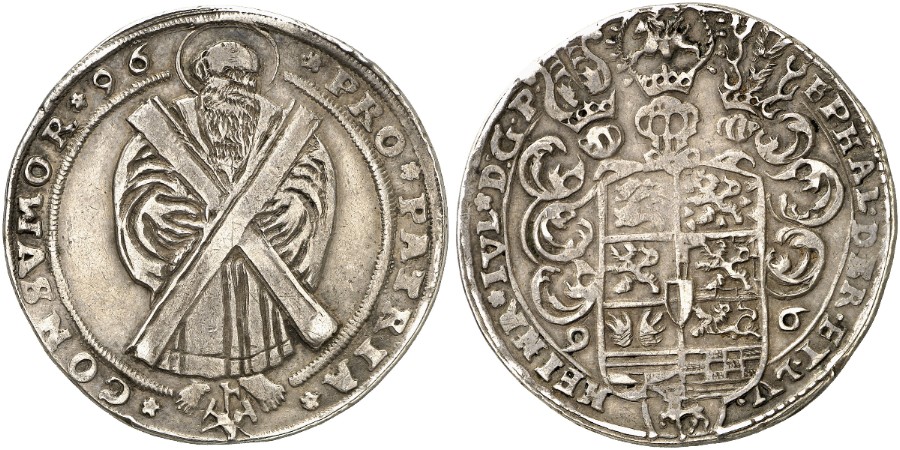 After the death of Philipp II, Henry Julius of Wolfenbüttel occupied the Principality of Grubenhagen and took over the profitable St Andrew’s mine so that the section Brunswick Wolfenbüttel also starts with thalers which show Saint Andrew and were minted from the yield of the St Andrew’s mine. The earliest pieces date back to the year of the occupation, 1596, like this extremely rare mule from 1596 graded very fine.

Frederic Ulrich had been using the St Andrew’s mine during the first years of his reign but, at the Reichskammergericht’s command, had to hand it over to Christian I of Brunswick-Lüneburg, whose turn it was now to mint thalers from the silver of the Andrew’s mine. Frederick Ulrich, however, could take comfort in the fact that the St Jacob’s mine in Lautenthal yielded great profits. Its silver was minted into the stunning jakobslösers, of which a last specimen of the Preussag collection will be auctioned off in this part of the auction.

In this auction impressive medals featuring mining themes as well as a large number of Harzgold ducats are up for sale. In addition, there is yet another batch of lösers this time, for instance the type from Christian Louis from Clausthal, which shows the Saxon Steed jumping over a mining landscape, or the lösers from Zellerfeld depicting the Wild Man. 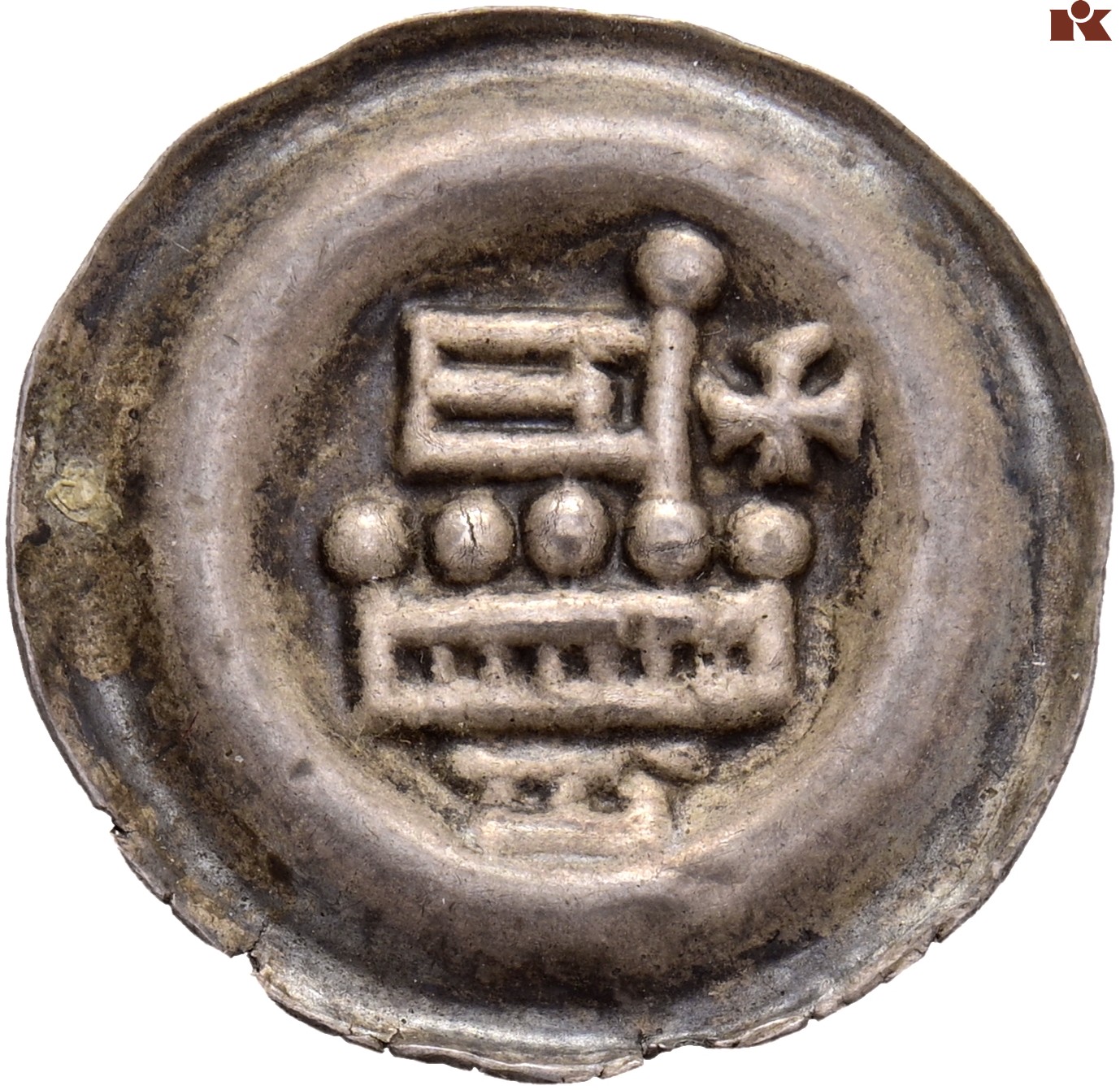 Lot number 1277: HANOVER. Gold medal, 1830, by R. V. Jeuffroy, on the breakdown of the Treaty of Amiens and the occupation of Hannover by Consul Napoleon. Extremely rare. Probably unique specimen in gold. Extremely fine to FDC. Estimate: 5,000 GBP

Lot 1277 lists a very special piece, which is not strictly a mining coin. We are dealing with a specimen of the medal of 1803 that R. Jeuffroy created on behest of Napoleon on the breakdown of the Treaty of Amiens and the occupation of Hannover, cast in gold. Until now this piece was known in silver and bronze versions only. For the former, Napoleon must have used silver from the Welf mines, as can be read on the medal. This description, however, was kept on the bronze and gold medal. The latter seems to be the only surviving specimen, if not the only specimen struck, and, on top of that, from the possession of the Bonaparte family.

The auction also presents a comprehensive series from Henneberg, Hesse, and especially from Hohnstein County. Let a piece of Henneberg be mentioned, which is likely a unique specimen, a half reichsthaler from 1696, a thick thaler to be more precise, minted with the dies of the 1/4 reichsthaler in Ilmenau. 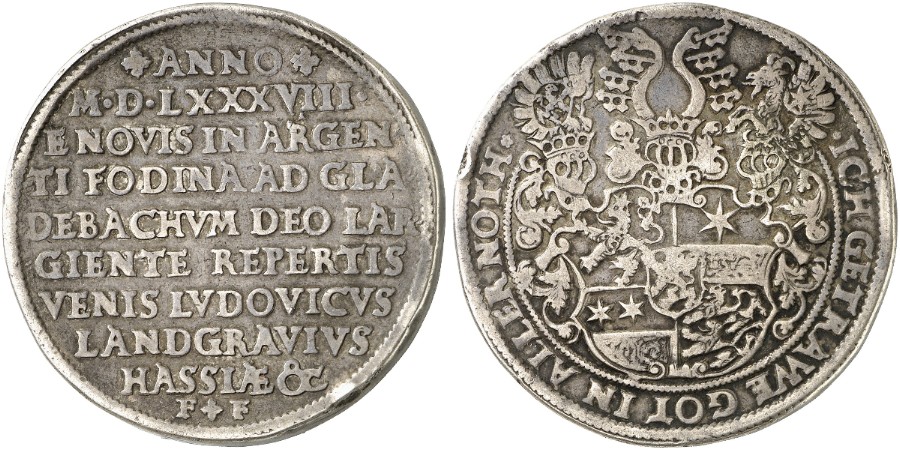 Hesse is represented in our preview by a thick double reichsthaler from 1588 from the yield of the Gladenbach mines, of which there are only three known specimen. The Gladenbach mint, which minted this piece, was moved to Marburg, the capital of Louis IV, as early as 1590. 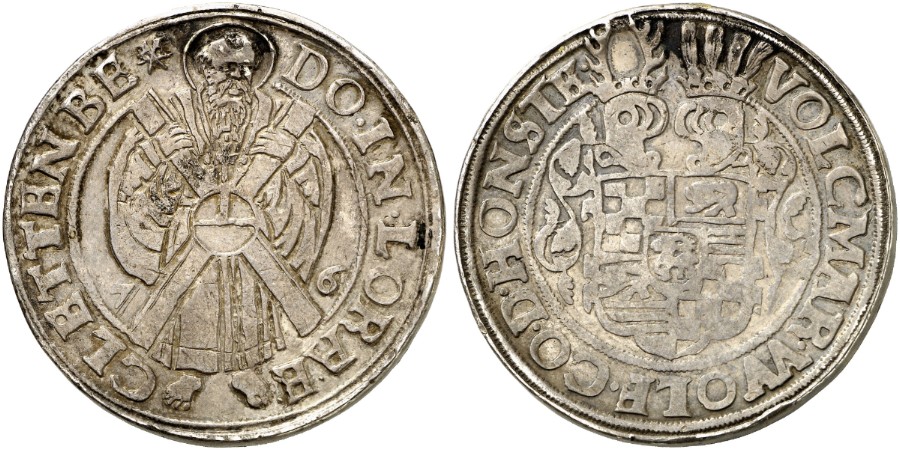 The coinage from Hohnstein County brings us back to the depiction of Andrew that we already know from Brunswick. In fact the Andrew’s mine was originally located on territory of the Count of Hohnstein. When the house died out in 1593, the Duke of Brunswick-Grubenhagen confiscated the land in his position as overlord to bring the profitable silver mine in his possession. Even though the real heirs filed a suit at the Reichskammergericht, they were poorly compensated with several insignificant territories, while the valuable silver mine remained in the possession of the House of Welf.

Many thalers and other coins testify to the former wealth of the House of Hohnstein, so for instance this thick double reichsthaler from 1576, produced in Ellrich from the yield of the St Andrew’s mine. 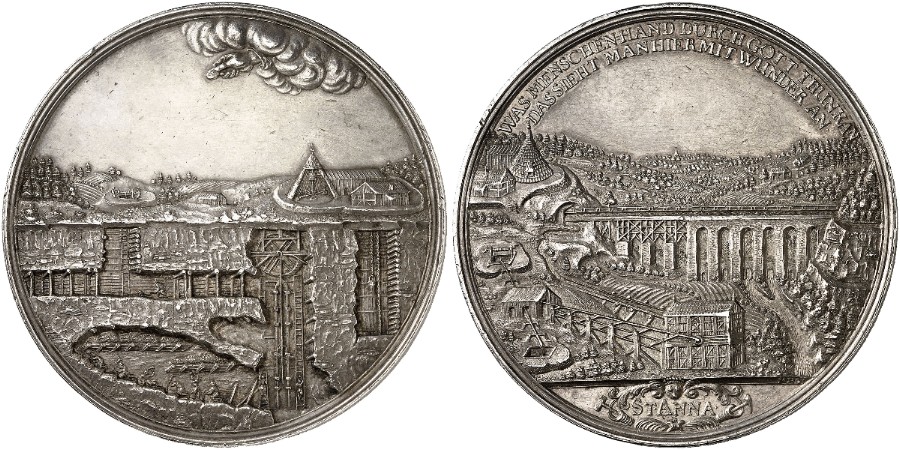 Let us turn to Saxony, represented with just under a 100 lots. The Elector of Saxony controlled the mining area surrounding Freiberg and thus had one of the richest silver resources at his disposal, which was one of the defining factors that enabled his taking an important role in the German States. Numerous thalers from 1542 onwards are on offer, also magnificent medals such as a stunning silver medallion of 8 reichsthalers from 1690, which accurately depicts how silver mining worked with the latest technology at the time. 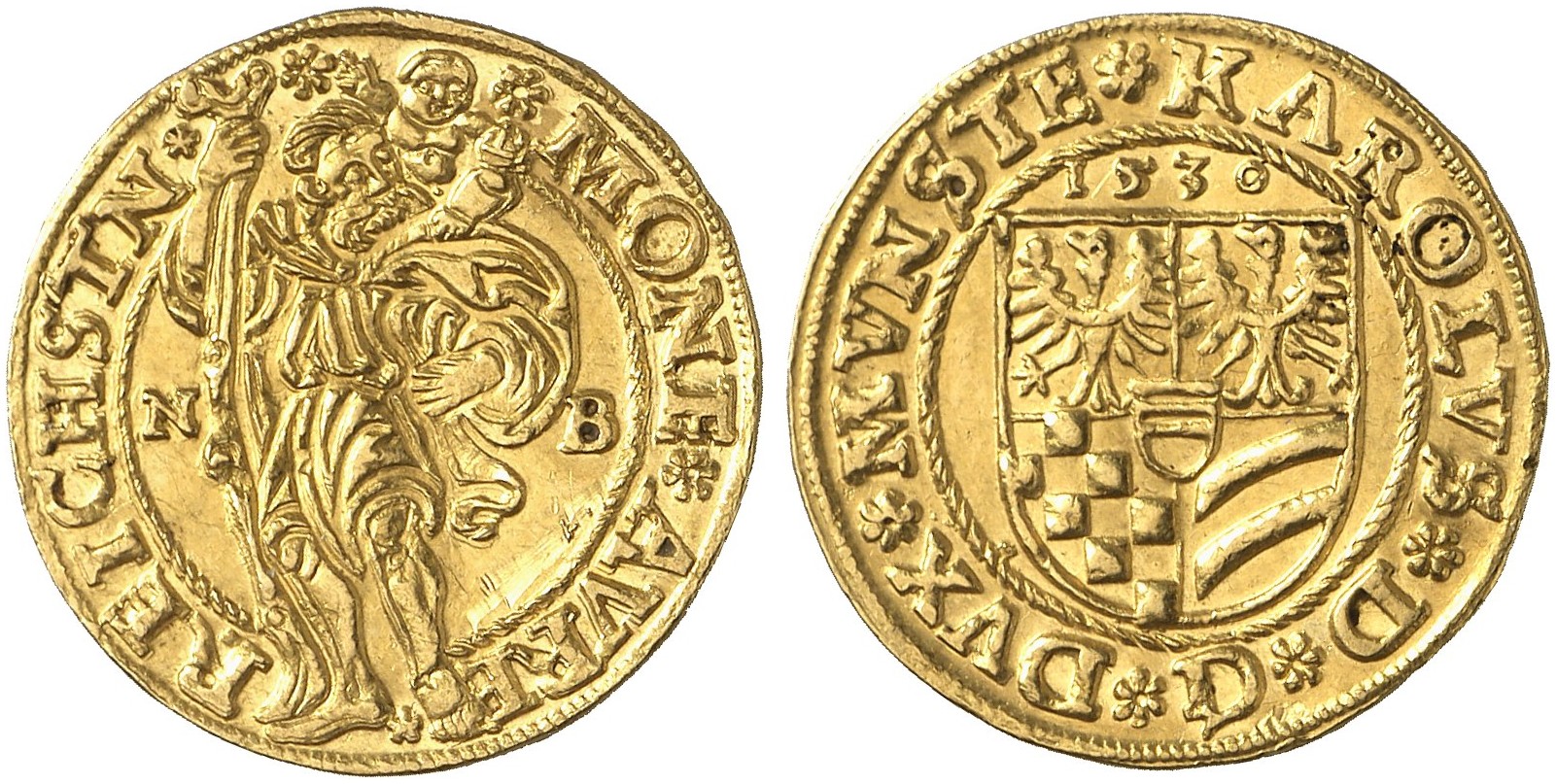 Silesia, or the Duchy of Münsterberg-Oels respectively, is represented by a series of gold guldens and ducats from the yield of the Reichenstein mine, today Kasperske Hory.

The current assumption concerning the descent of the lords of Stolberg is that they descended from the Dukes of Hohnstein. That would explain why the Stolberg family was in possession of large silver resources in the Harz mining areas. The auction offers a comprehensive series of Stolberg thalers, whose legend on the reverse reads in translation “God bless and preserve our mines”. 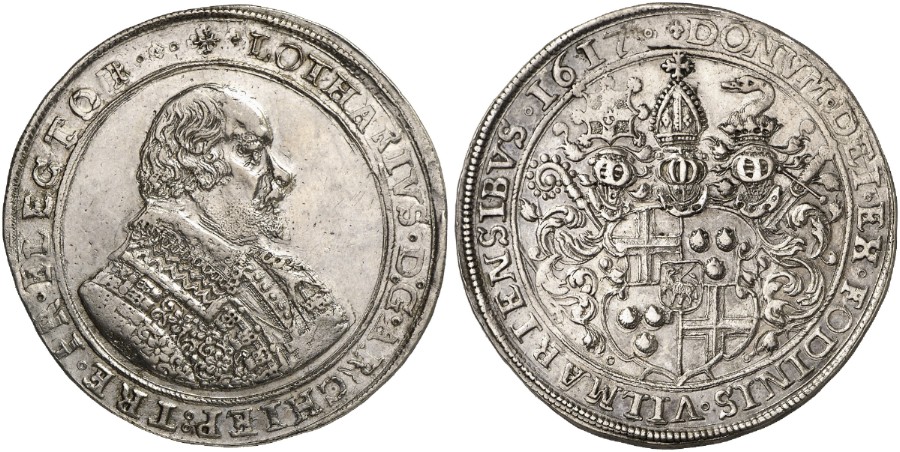 Of course there are rare and stunning coins with mining themes or inscriptions from still other German territories, which indicate that the pieces were minted from mining silver or gold. 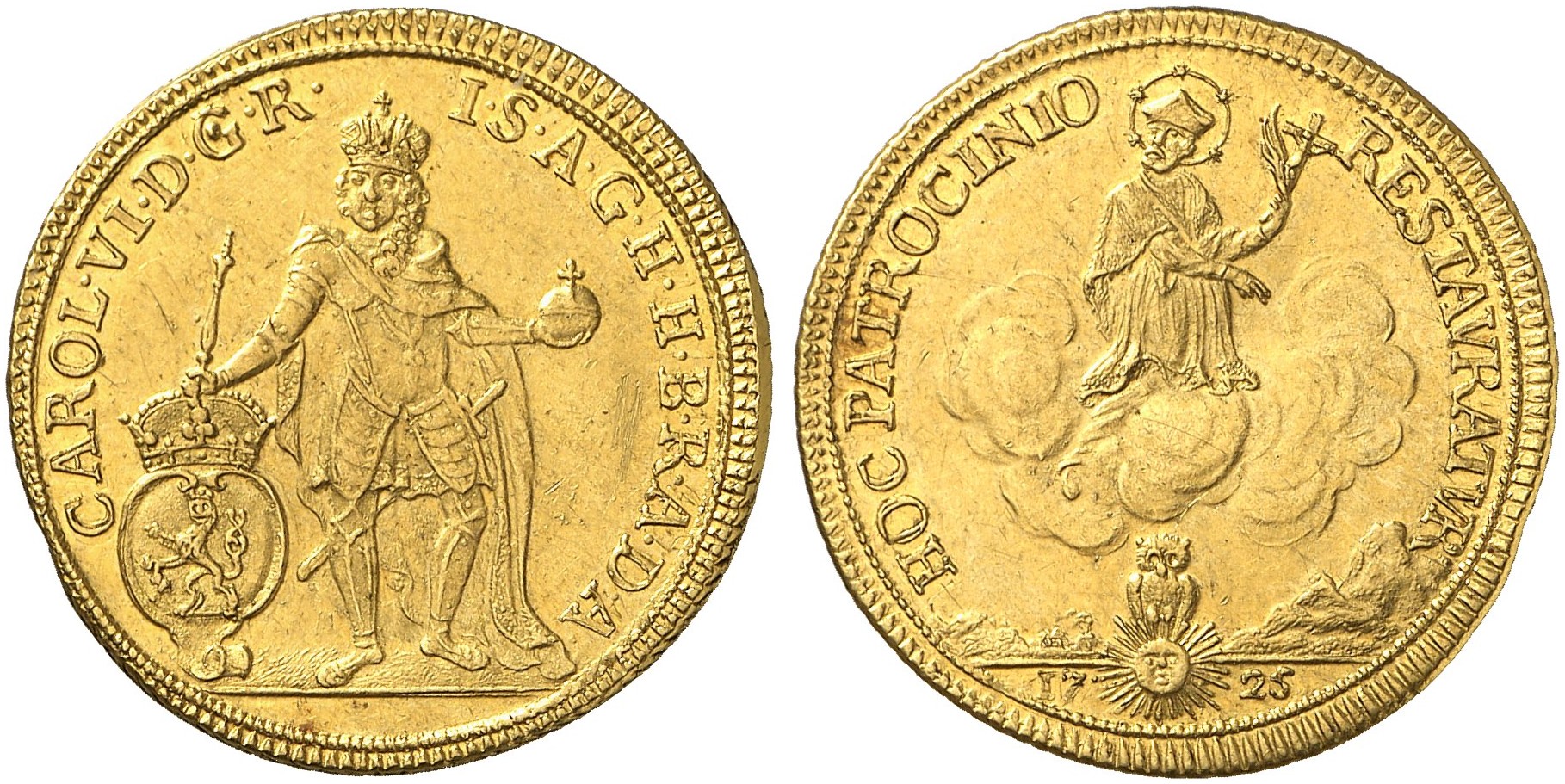 Next up are round about 50 lots of coins from the Holy Roman Empire and Austria with a small series of gold ducats from the House of Rosenberg from the yield of the Reichenstein mines.

The outstanding piece in this series is a double ducat of Charles VI, minted in Prague in 1725 from the yield of the Eule (Jílové) mines. The abundance of the mine was legendary: So the old chroniclers fabled that, at the time of Libussa, the mythological tribe mother of the Premyslids, golden nuggets had supposedly been found there, which were heavier than the duke and the duchess.

Further, the auction offers c. 120 lots of coins and medals from Europe and overseas. The emphasis is on Denmark, France, and Norway.

The section multiple lots is remarkable. Up for sale are comprehensive but cleverly chosen assortments on the whole. For instance, lot 1762 could be of interest for a collector interested in gold investments. It comprises 151 objects altogether and primarily contains gold medals from the 20th century, but also a series of gold coins from the American Gold Rush as well as a platinum coin. The highly attractive object, which absolutely needs viewing, is currently estimated at 50,000 GBP.