When Alexander the Great conquered Persepolis, he found not only precious robes, elaborately manufactured furnishings and unique gemstones in the royal treasury; he mostly captured jars made of silver and gold, whose metal value ancient writers have quantified at 120,000 talents of silver. 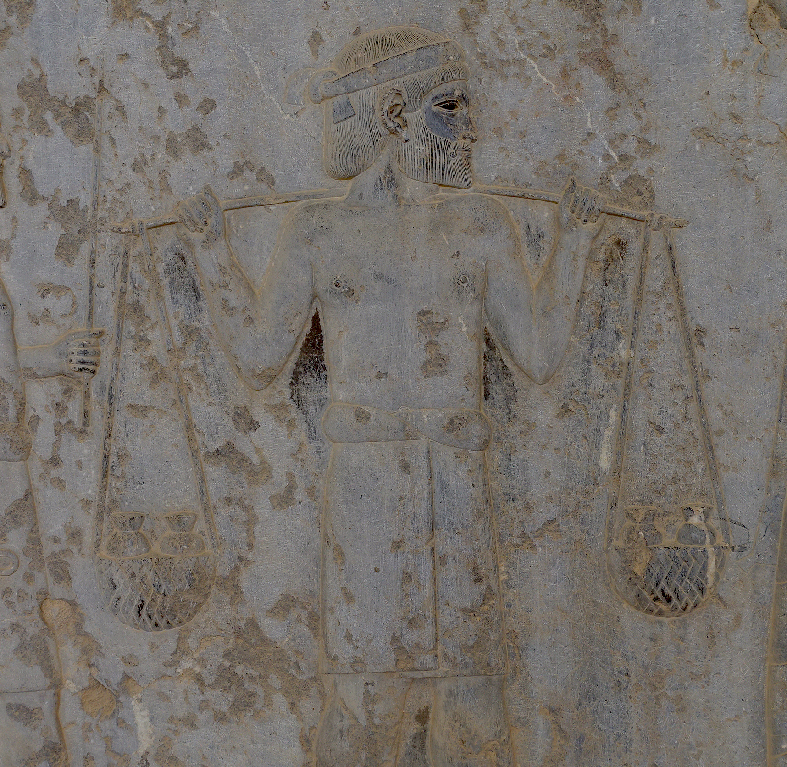 Apadana in Persepolis: An Indian brings the famous gold dust from the Indus Valley as a gift to the King. Photo: KW.

Coins however were hardly kept in the treasury. Why would they have been? They were only needed when the Persian King had business in the Mediterranean. And starting with his intervention in Asia Minor, at the latest, there was plenty to be done (and to be paid) right there. Namely, the Persians kept a large fleet there, the set-up and maintenance of which was financed with royal silver. 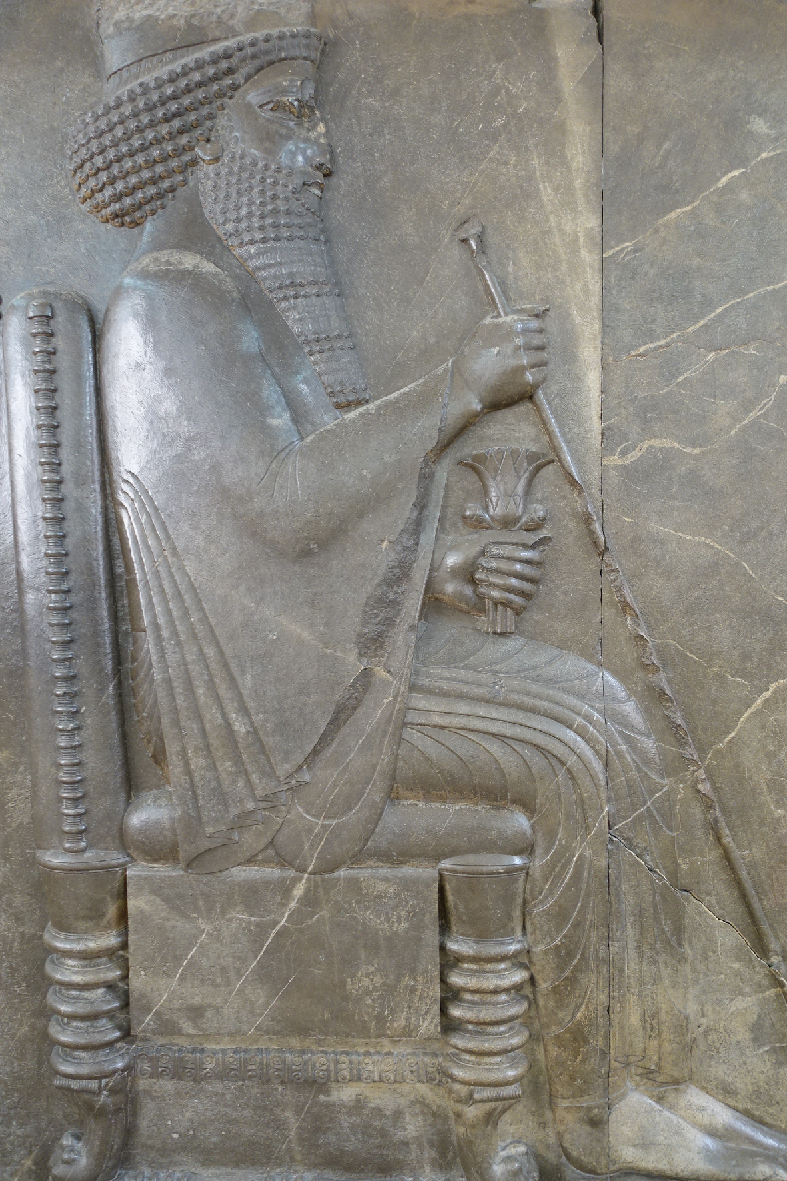 The Persian King Darius I enthroned; he greets the legations delivering their gifts to him. Photo: KW.

Not only the gold darics and silver sigloi created by King Darius I were used for that. Far from it. On the King’s orders, the responsible satraps had the budgeted amount minted in the locally most popular coins. In doing so, they were not limited to “Persian” currency, but used several different coin designs. However, these were not allowed to give the impression of the satrap being the monetary authority, which is illustrated by the fate of Aryandas described by Herodotus. Darius I is said to have had Aryandas executed in 500 BC for the crime of minting silver coins bearing his own portrait. Unfortunately, no coins of Aryandas are known in the world of numismatics, thus there is no proof for Herodotus’s words. 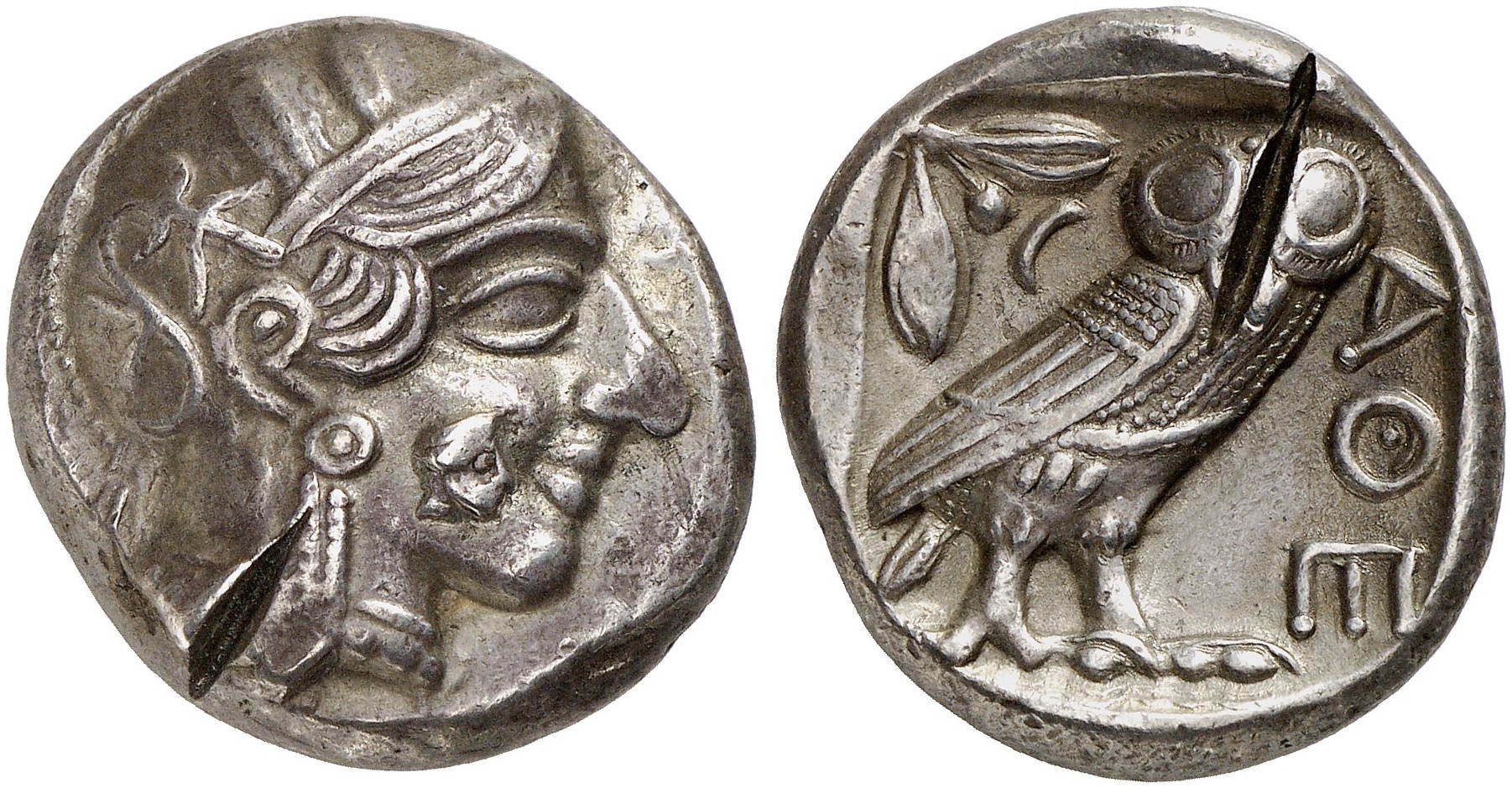 In 1993, Leo Mildenberg stated in his article on the monetary system of the Persian Empire that the Persian satraps used to imitate especially the Athenian owls. At first glance, many of these imitations are not even recognizable as such. They can be only identified as being Persian, if they deviate from the originals in style or even image. 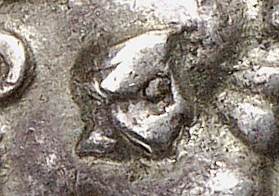 Detail of the Tetradrachme of Cyrus the Younger.

This is the case for the coin offered at Künker’s as lot 548. This unique specimen inspired Wolfram Weiser to a well-elaborated theory about the historic situation in which these coins may have been minted. For him, it is of vital importance that the small head pictured on this coin is, on the one hand, characterized as royal by the erected tiara, but does not, on the other hand, wear the long goatee customary in the Persian Empire. Weiser therefore seeks to identify this portrait as Cyrus the Younger, who was named general (Karanos) by his father in 407 BC and equipped with special powers (and his own budget). Cyrus was probably no more than 16 years old at the time, which is why his father assigned him the experienced satrap Tissaphernes as his aide. 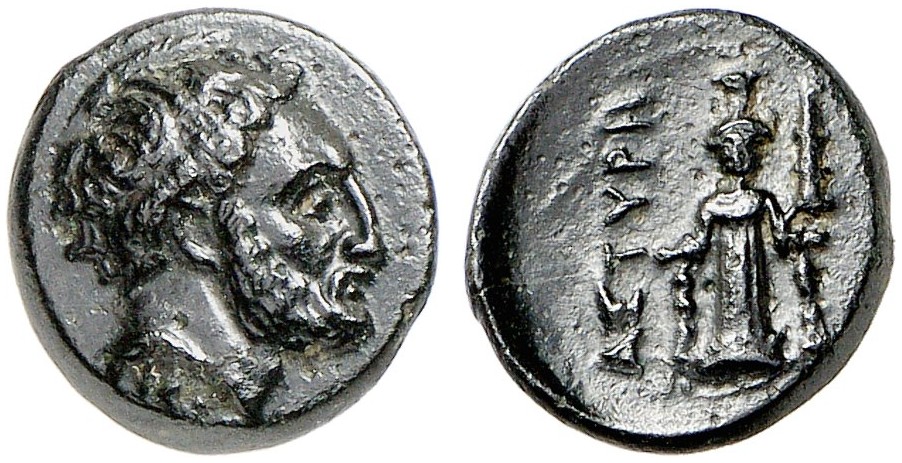 Identifying the small portrait as Cyrus the Younger is all the more fascinating as we have a lot of information about the pay he used to offer. But let us first look at the historical situation of Cyrus becoming Karanos:

We’re at the end of the Peloponnesian War, where Sparta and Athens fought for the supremacy in the Greek world. Athens had run out of money, and Alcibiades, who, after the vandalizing of the Athenian hermai, had defected to Sparta, lured the Athenians with the promise of financial support from the Persians, should Athens replace democracy with oligarchy and call him back with all honors due. That was, in fact, followed by an overthrow, though short-lived and resulting in the takeover of power by the radical democrats under Cleophon, against whom the Spartan general Lysander then collaborated with Cyrus the Younger.

For this purpose, Lysander paid Cyrus the Younger a diplomat’s visit in Sardis, the occasion for a pact between him and the young Karanos. Cyrus had a budget of 500 talents. Thus, he was unable to simply accept Lysander’s slightly exaggerated request for a pay of one drachm a day for each man. Up until then, the Persians had paid mercenaries only three oboloi. After long negotiations, they agreed on four oboloi per day and soldier. That meant 4,000 drachms resp. 1,000 tetradrachms per ship and month, which equaled five tetradrachms a month for each man. 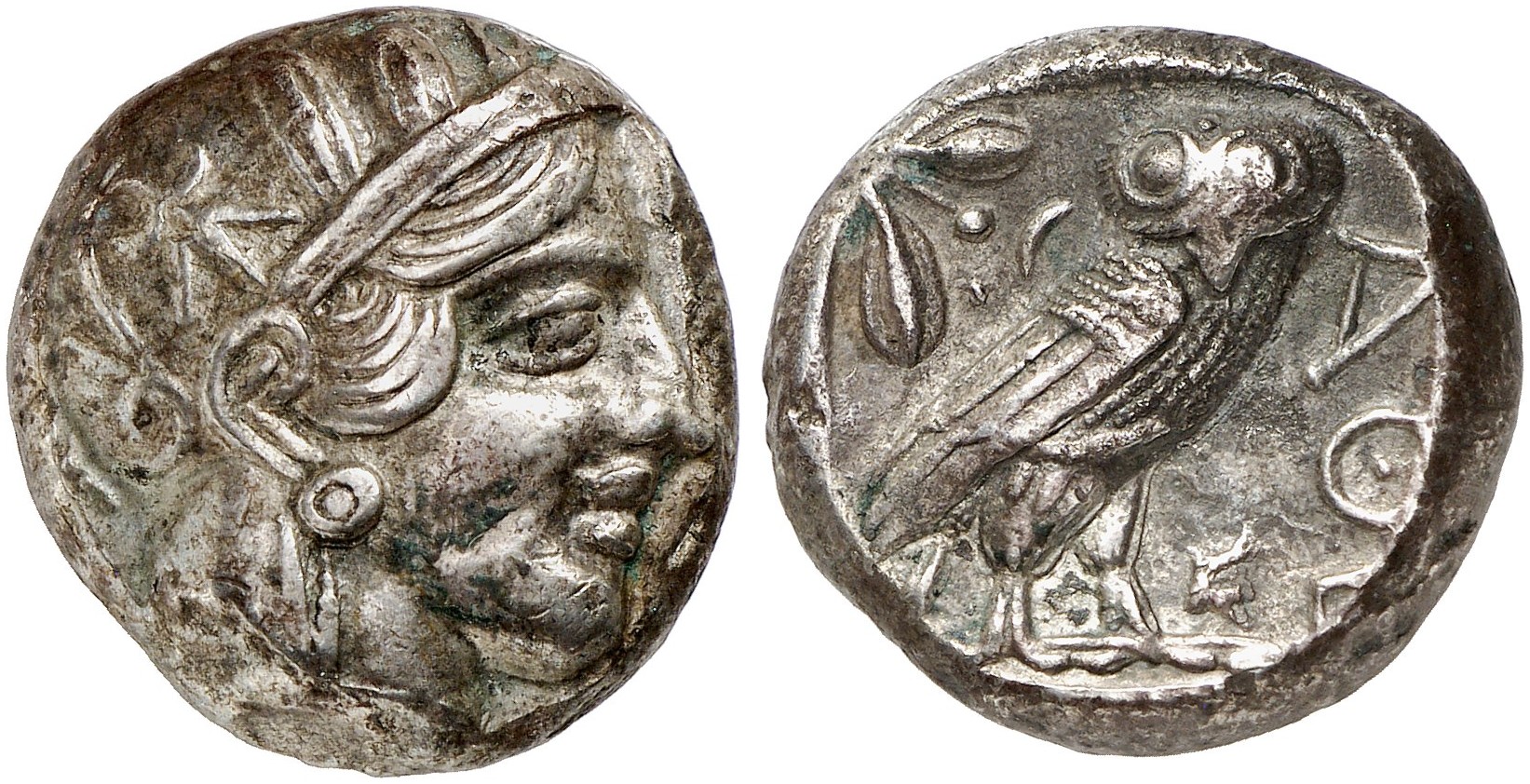 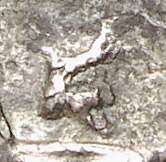 These workers solved the problem of creating Persian coins based on Athenian models by adding Aramaic lettering or – all the more spectacular – small heads of Persian authorities as mint marks. However, Persian royals were not pleased with these portrayals and had the heads removed from the dies. Later-on dies without portraits were manufactured.

Weiser’s theory is attractive. It relates these coins to a man known to (and perhaps admired by) many since their school days from the Anabasis, the great work of Xenophon about the Greeks’ returning march to the sea. However, it should not be forgotten that the theory is in fact just that. And that these coins may well have been created in a different historical context. After all, the Persians had coins minted again and again for paying mercenaries or for intervening in Hellenic disputes. Thus, Hilmar Klinkott in his book on satraps cites no less than 40 quotes from the works of ancient writers dealing with Persian subsidies. 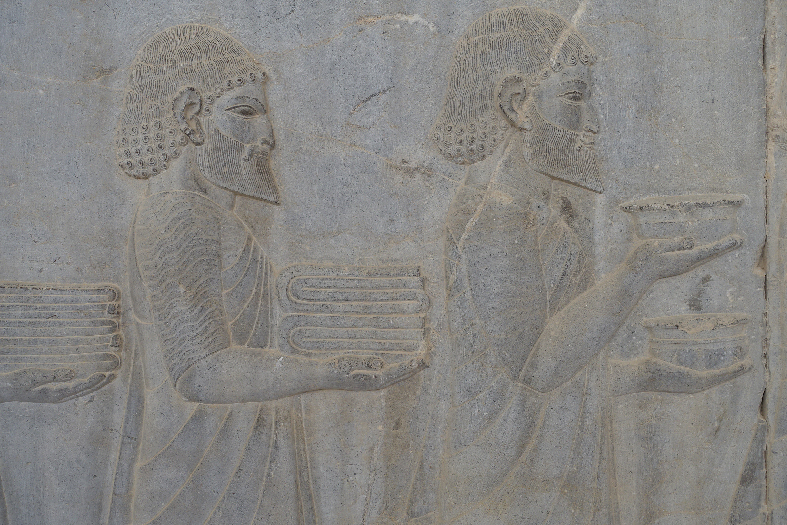 In any case, the tetradrachms of Athenian type offered at Künker’s, which through their mint marks clearly show that they were minted on Persian orders, are of highest historical-numismatic interest and a key issue for understanding the monetary entanglements of Persians and Greeks.

Last but not least, they are a wonderful testimonial for showing that the relationship between Greeks and Persians was a lot more complex than some modern Hollywood fairytales make believe.