Caught Between all Stools: Simon V of Lippe

On 2 April 1511, Bernard VII of Lippe, “the Bellicose”, died. By the standards of his time, he reached the incredible age of 81 years. And that made him, who had already come to power as a toddler, the longest-ruling nobleman of Europe. As a result, his eldest son Simon was already a mature (and reasonable) man, when he took over the rule at the age of forty. And the reign was in desperate need of such a man.

The Pressing Problem of the Lack of an Heir
Simon faced an existential problem, well, at least it was existential to a ruler. He lacked a male heir. Historical sources give us a little insight into how desperately the ruling couple wanted a son: we meet Simon and his wife in the autumn of 1515 on a journey to Cologne, where they hoped to buy a letter of indulgence. This is all the more remarkable keeping in mind that Lippe belonged to Paderborn, which means that it was part of the Archbishopric of Mainz, where Albert of Brandenburg had the monopoly on the sale of indulgences. This means that the ruling couple could have simply stayed in Detmold waiting for the passing preacher of indulgences. However, the next year the childless couple travelled again to Cologne to buy another indulgence.
Why? Well, on 1 January 1515 Emperor Maximilian I, who constantly faced the risk of bankruptcy, had confirmed – obviously in exchange for a rather high amount of money – that Duke Henry the Middle of Brunswick-Lüneburg would be entitled to 86 castles, towns and villages if Simon V died childless. In other words, the House of Lippe would lose its territory following Simon’s death. Simon could not hand it over to one of the sons of his two sisters.
In this situation, Simon approached the problem in two ways: first, he begged God to give him a son and, at the same time, he negotiated with his mightier neighbors asking them for protection against the Duchy of Brunswick. For one thing was clear: despite his promise, the emperor wouldn’t do anything to enforce the legal right of the Duke of Brunswick. If the duke was facing a strong military front, he would probably refrain from conquering Lippe.
Thus, Simon did homage to the Bishop of Paderborn and Osnabrück, among others, for Lemgo and Detmold. He made the bishop guarantee that he would be able to rule completely independently during his lifetime and that, in case he died childless, his property would be handed over to a nephew. Under the same conditions, he did homage to Philip of Hesse, perhaps with the intention of counterbalancing the power of the bishop of Paderborn.
By means of this feudal homage, Simon secured his family’s claim to Lippe. Then, Walpurgis died on 21 December 1522. And so the ruler, who was more than fifty years old by then, had the chance to produce an heir with a young woman after all.
He didn’t waste time and married three months after becoming a widower. In fact, two sons and three daughters were born from this marriage. The succession in Lippe was secured. However, by doing homage to the Bishop of Paderborn and the Landgrave of Hesse Simon had imposed an uncomfortable obligation on himself.

Between Paderborn and Hesse
The story became more complicated because a monk called Luther sent 95 theses to the Archbishop of Mainz on 31 October 1517 initiating the Reformation. While the Bishop of Paderborn remained true to the Catholic faith, Philip introduced the Reformation in Hesse in 1526. So, faithful Catholic Simon stood between the fronts. While the Protestant faith spread among the citizens of Lippe – and Hesse fostered this  development –, the Bishop of Paderborn insisted on taking action against the Protestants. Therefore, Simon faced a dilemma: whatever his decision would be regarding the question of faith, it would upset one of his two feudal lords. 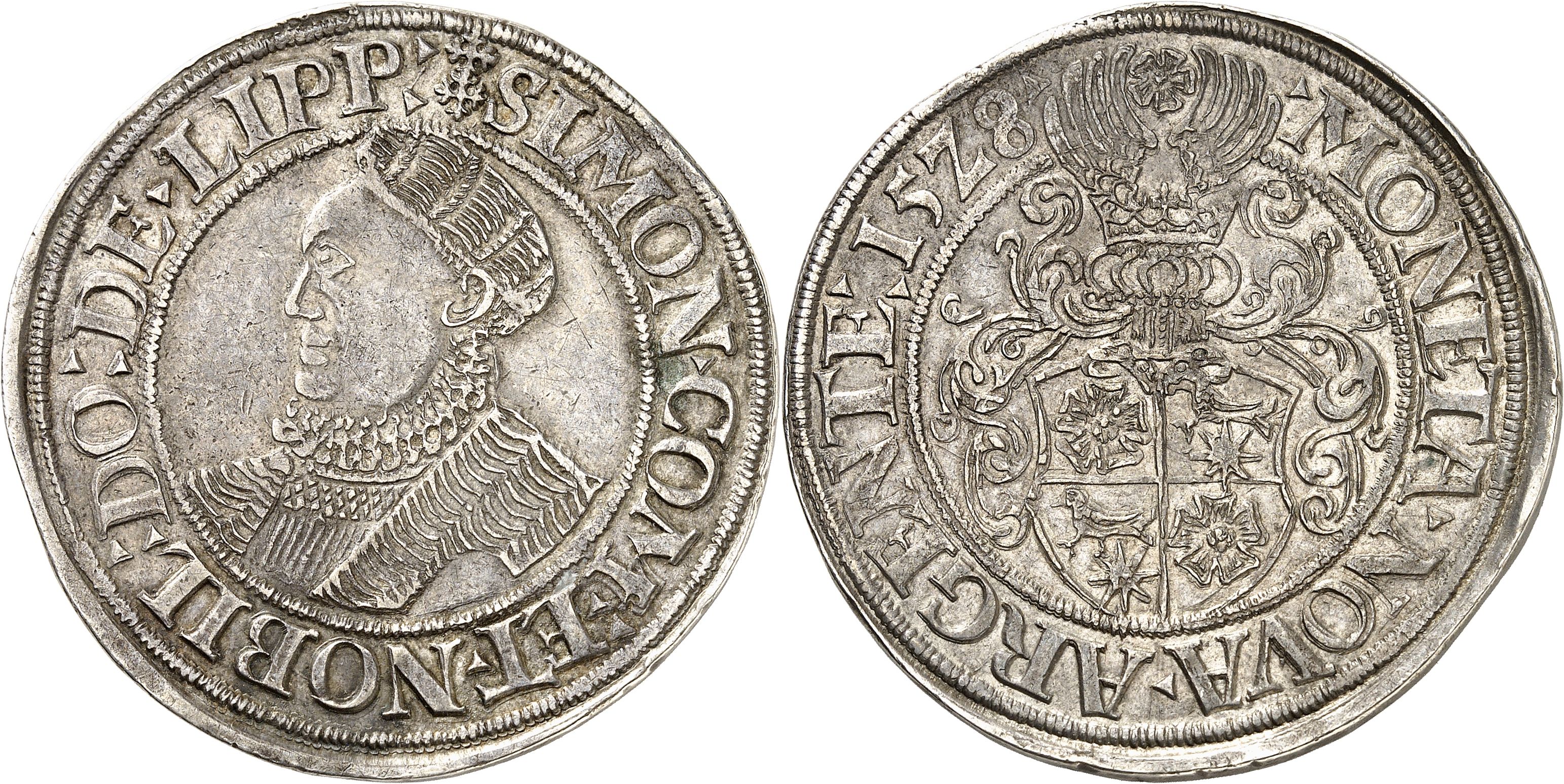 Was there a connection between this messy situation and the fact that Simon raised himself to Imperial Count? Anyway, he had held this title since the spring of 1528. And he was right to do so, because since the last Count of Schwalenberg had died in 1365, the Noble Lords of Lippe had been possessing everything the counts had left and, therefore, they were also entitled to be raised to counts. However, they hadn’t done this for almost 200 years, which is why we can assume that there was an important reason for this decision. As a count, Simon probably had more liberties, and he was in urgent need of those liberties for his religious policies. After all, counts were considered either members of high or low nobility depending on their importance, whereas a Noble Lord clearly belonged to low nobility.
The extremely rare guldengroschen from 1528 now offered by Künker was minted in this context. On the obverse it features the portrait of the almost sixty-year-old ruler surrounded by the inscription “Simon, Count and Noble Lord of Lippe”. The reverse depicts the coat of arms of Schwalenberg for the first time in a quarterly parted shield: now, the star with the swallow alternates with the five-petalled rose of Lippe.
By the way, this is the only multiple silver coin that Simon V had had minted. It was probably intended to be sent as a New Year’s gift to other rulers to inform them that he had raised to count. Thus, it was rather important to Simon to make this fact widely-known.

Silver from the Köterberg
This taler is also known as Köterberg taler because there’s a connection between its production and the discovery of copper ore and lead ore containing silver in Köterberg. Shortly after becoming count, Simon concluded a contract with mint master Gerhard Loys, and the document has been preserved. They agreed that Loys was to establish a mint in Lippstadt, where coins hadn’t been minted for about 200 years.
However, the mining work in Köterberg stopped as early as in 1543, without Simon having made a fortune from it.
This suggests that Simon proceeded in this matter just like he did with regard to becoming count: The Esslingen minting ordinance prohibited anyone who didn’t have their own mint from minting coins. The act said nothing about whether these silver mines had to be profitable or not.
By the way, the dies for this guldengroschen of 1528 were most definitely supplied by a medallist in the service of the counts of Mansfeld, that is, the family of the second wife of Simon V. Perhaps the Mansfeld family, whose mines were extremely productive, did not only supply the dies but also the material for this issue?

Lippe Becomes Imperial Fiefdom
Simon V died eight years after becoming count. Despite his two feudal lords, he had succeeded in pursuing independent policies. His son Bernhard VIII wasn’t as lucky. When his father died, he was only eight years old. His feudal lord, Philip of Hesse, insisted on being one of the three guardians of Bernhard VIII. The young count was raised at Philip’s court and became a loyal supporter of the Reformation, which caused Lippe to be among the losers of the Schmalkaldic War. And Charles V remembered only too well the tricks Simon V had used: he made Lippe an imperial fiefdom once and for all.