On 10 April 1638, Augustus the Younger celebrated his 59th birthday. How important such festivals were for baroque royalty is still illustrated by the Queen’s Birthday Parade. This event has been taking place since 1748. The fact that the so-called birthday parade is not held on the actual birthday but on a day in June, when fair weather is guaranteed, demonstrates that there was and is more to a prince’s birthday than celebrating the fact that the ruler turned one year older.

In the Baroque era, festivals such as birthdays were the perfect opportunity for celebrating oneself and one’s importance. After all, such a celebration reinforced one’s rank within the hierarchy of the Holy Roman Empire. And Augustus the Younger had every reason to boast about climbing up the ladder in April 1638: Emperor Ferdinand III had granted him the privilege de non appellando. It was both a financial privilege and the emperor’s approval for Augustus the Younger to act as head of the wealthy principality of Brunswick-Wolfenbüttel. Augustus had been fighting for this since the death of Frederick Ulrich in 1634. Now he achieved his goal. Finally! A reason to announce it to the entire world. And in the Baroque era, nothing was better suited for this than a celebration. 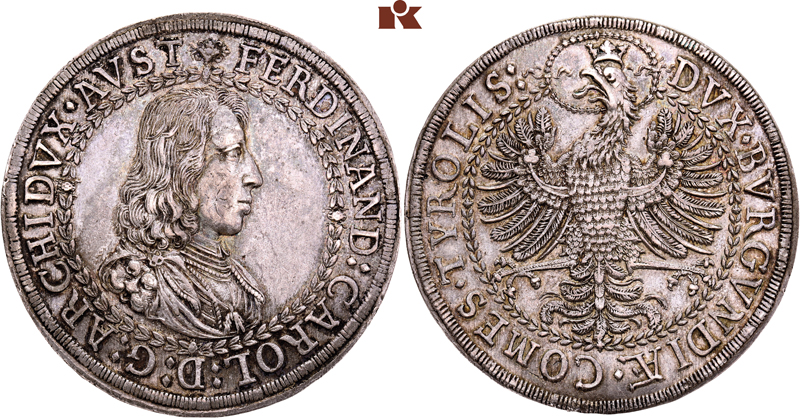 Lot 1041: Augustus the Younger, 1635-1666. Gilded bronze cast medal, unsigned. Gnadenpfennig with the ruler’s portrait. About extremely fine. Estimate: 2,000 euros. Medals like these were worn on long chains by the ruler’s favorites as a sign of the ruler’s favor, the material and the weight of the medal represented the status of those who wore it.

When we stand in front of the magnificent castles of the Baroque era today, we’re likely to forget that they were rather used as a stage than as a home, and that they only unfolded their true importance when a prince sent out invitations for a celebration. Whether it was a christening, a funeral, a marriage or a birthday – there was always an occasion. Courtiers, ambassadors and noble neighbors came and entered the castle in grand parades, dined sumptuously, enjoyed concerts, operas and ballets, hunted and admired fireworks. The rank of a host was determined by how high-ranking his guests were and to what extent he succeeded in astonishing them. And to make them remember this astonishment even after the celebration was over, the host distributed gifts to his guests at the party.

In theory, it was up to the prince what he wanted to give his guests as a gift. But he obviously thought about what would have the greatest effect. Let’s recall that in the Baroque period, every self-respecting prince had a coin collection. This coin collection wasn’t a carefully kept secret but a possession that was shown to all noble visitors that came to the prince’s estate. Thus, an eye-catching coin was not only seen by the recipient but also spread the news about the glory of the issuer among those who took a look at these coin collections.

For the Dukes of Brunswick, who had rich silver deposits in the Harz, it was therefore easy to decide for impressive coins to be used as gifts, which immediately caught the attention of the observers due to their size.

The lösers that Augustus the Younger presented his guests with on the occasion of his birthday party are very impressive, too. These representative coins offered the additional advantage that they could be issued in different weights. That was crucial: for every guest and every ambassador it was important to receive a gift that corresponded to their status. And a löser issue with different versions of various weights made it possible to determine the value of every gift as precisely as possible. 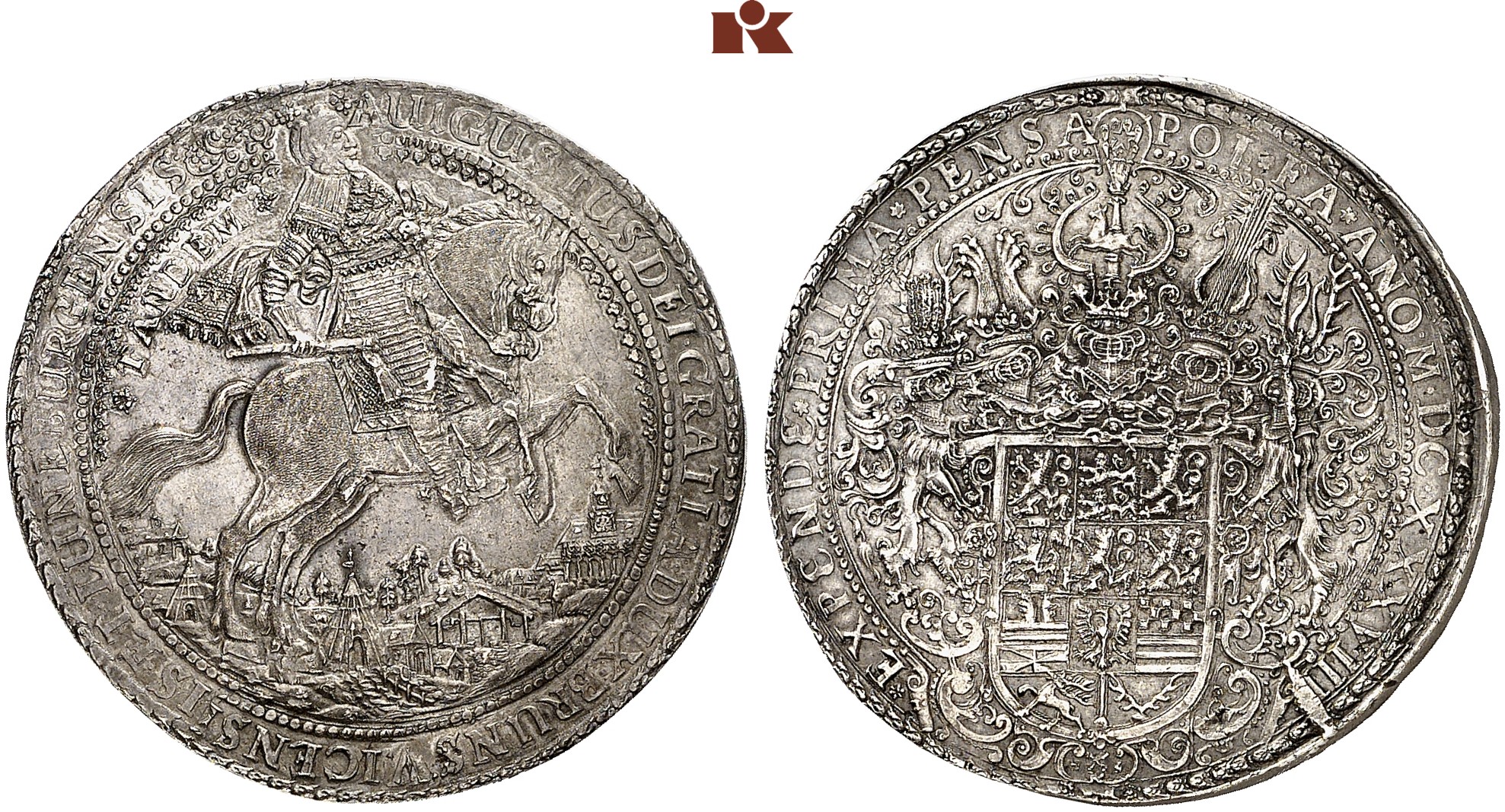 Augustus the Liberator, Member of the Fruitbearing Society

And it wasn’t just about the silver used for the lösers. After all, Augustus the Younger wasn’t just any prince. He was a member of the Fruitbearing Society. In this society, members of the nobility and princes of the empire celebrated the art of conversation. Those who belonged to this illustrious circle were virtually obliged to demonstrate their masterful linguistic skills. In addition to the Latin exclamation TANDEM (= finally) and the (translated) title Augustus by the Grace of God Duke of Brunswick and Lüneburg, we can read on the reverse Think about the cost first, then do it in a mix of Latin and Italian. This mixture of languages isn’t a sign of poor Latin skills but a bow to the lingua franca of the time, Italian. Knowing three foreign languages was considered a sign of being educated. While a pastor took pride in knowing Latin, Greek and Hebrew, princes and diplomats studied Latin, French and Italian. The depiction on the löser was quite common at the time: the duke is sitting on a horse rearing to the right in the pose of a general wearing armor and baton. This pose is often used as an allusion to the battlefield. By making his well-trained horse enter the levade, a rider uses the animal’s body to protect his own from bullets. Under the horse’s hooves we can see a detailed mining scene used by Augustus to allude to his abundant silver deposits.

A Glance at 18th Century Literature

We owe the information that the lösers with the TANDEM inscription were issued on the occasion of the birthday of Duke Augustus the Younger to a Brunswick historian who, on the initiative of the chancellor of Brunswick-Lüneburg, was given the opportunity to use the archives of Wolfenbüttel: Philipp Julius Rehtmeyer (1678-1742). Not only did he write a work on Brunswick church history, he’s also the author of a three-volume work on the Dukes of Brunswick and Lüneburg, which becomes more and more detailed the closer the author gets to his own time. We want to conclude this article by quoting Rehtmeyer’s text – translated into English: “His annual birthday fell on 10 April, when the famous Martin Nessel dedicated a Panegyricus to him. There is no doubt that he had the silver löser of 5 talers minted on that day featuring the Duke on a horse, next to it TANDEM, around it the title. On the reverse the coat of arms and around his coat of arms in Latin and Italian EXPENDE. PRIMA. PENSA. POI. FA. ANNO. M. DC. XXXVIII.”

It is worth reading these old books because they often contain highly interesting information, without them we would have to go to great lengths to get these insights.

By Ursula Kampmann on behalf of Künker