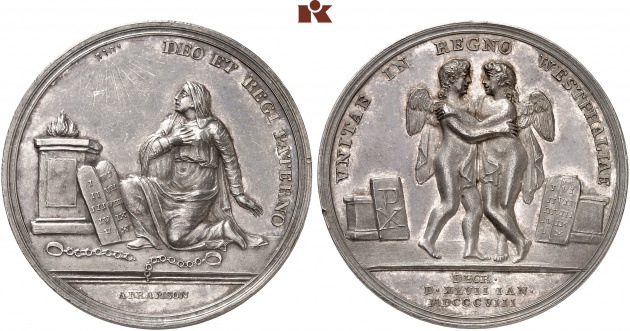 Schätzpreis: 500,00 €
Zuschlag: 3.600,00 €
Hieronymus Napoleon, 1807-1813.
Silver medal 1808, signed by A. Abramson; commemorating the grant of equal rights to the Jews of Westphalia. VNITAS IN REGNO WESTPHALIAE (Unity in the kingdom of Westphalia), in exergue DECR(etum) D(ie) XXVII IAN(uarii) MDCCCVII (decreed on the 27th of January 1807); the winged genius of Christianity – behind him an altar against which a tablet with the PAX-symbol, being in reality the two first letters of Jesus Christ’s name written in Greek characters, leaned – and the also winged genius of Jewry – behind him an altar, against which a tablet with the Ten Commandments once given to Moses leaned – are embracing each other//DEO ET REGI PATERNO (For God and the king of the fatherland), in exergue ABRAMSON; the veiled personification of Jewish Faith kneels in all humility before an altar with blazing flames, against which the two tablets with the Ten Commands are leaned and above which Jehova’s name written in Jewish characters appears in a gloriole. The broken chain at Jewish Faith’s feet symbolises the consequences of the Jewish emancipation in Westphalia. 42,45 mm; 27,84 g. Friedenberg S. 40 f.; Hoffmann 157; Slg. Julius 1882.

Following the ideas of his brother Napoleon, Hieronymus, king of Wesphalia (1807-1813), issued a decree granting equal rights for the Jews living in his kingdom. Even after Napoleon’s fall and the end of the kingdom of Westphalia, many of these reforms remained in full force and effect. In 1833 the full equality of Jews living in the electorate of Hessen-Kassel was regulated by law. Abraham Abramson (1754-1811) was one of the most important German-Jewish medallists and master of the Prussian mint. He created the designs and engraved the dies for more than 250 medals.