You are here: Collection areas old German coins and medals

Coinage in the area of the German Empire from the end of the Middle Ages (15th century) until the introduction of the imperial currency in 1871 can certainly be counted among the most diverse and richly varied numismatic collection areas that exist. 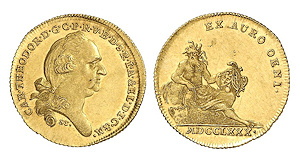 While other European nations such as England, Spain and France were already sovereign states with a centralized coinage by the end of the medieval period, Germany remained territorially fragmented until the foundation of the empire following the German-French War (1870/1871). This led to a multitudinous and barely comprehensible spread of circulating German coin types and minting institutions such as duchies and counties, bishoprics and monasteries, and Free Imperial Cities. A variety of measures, including the imperial mint orders of the 16th century or the mint contracts of the 17th century, long remained unsuccessful in the attempt to establish a unified German coin system, and thus simplify trade and travel. One might almost say: luckily for the modern collector of pre-1871 German coins! 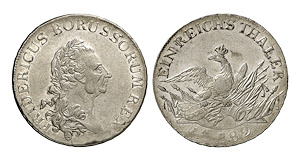 Whether Anhalt, Brandenburg and Saxony, or Corvey, Esslingen and Magdeburg: the multiplicity of mints can, for everyone interested in the history of his or her homeland, represent the starting point for an extensive collection of pre-1871 German coins. Large German States coin types like the north German taler and the southern German gulden, coined primarily for trade purposes, offer coin images just as fascinating as the countless small coins (state- and particular types) from daily payment transaction. The 2/3 taler, which functioned as a "bridge denomination" between northern and southern Germany, can – with its many variants released by numerous German mints – represent an interesting collection area of its own among older coins.

To these may be added diverse attractive German gold coins (e.g., ducats, gold guldens, crowns or Max d'Or) and their various special forms – multiple pieces, river gold ducats, mining mintings and gold versions of base small coins – which, due to easily accessible literature, can lead to quick success in collecting. Medals and mixed types coined on various occasions, such as the schautaler, represent an interesting collection area featuring equally interesting motifs. 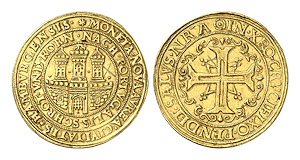 The evolving history of the German Empire and its territories is reflected in the impressive images found in coin- and medal minting. Whether in the religious motifs of the Reformation, the propagandistic war mintings of Frederick II ("the Great"), or the medals of the 19th century on achievements in science and the arts – there is something to be found in pre-1871 German coins for every taste and every area of historical interest.

Experience the rich variety of German States coinage and take home a sample of the "imprint of the history" of Germany.

The catalogues cited can only give an overview of the collection area Pre-1871 German coins. A wide range of specialized catalogues exists on the individual areas, regions and cities for interested collectors.

Current coins from our Coin Shop