The Roman Empire lasted until the late Middle Ages – at least, in eastern Europe. With the division of the Imperium Romanum following the death of the Emperor Theodosius I in 395 the so-called “Byzantine Empire”, named after its capital, arose in the eastern part of the old empire. In reality, however, this terminology is a product of modern historical research. The contemporary citizens always considered, and referred to, themselves as “Romans” and never as “Byzantines”. 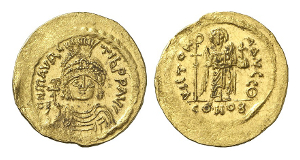 From 330 to 1453 Byzantium, originally founded as “Nova Roma” (Νέα ̔Ρώμη) (and later as Constantinople) was not only the residence of the Emperor of the Eastern Roman Empire, but – due to its location on the Bosporus – also a bridge between the medieval occidental- and oriental cultures. Following the “Eastern Schism” of 1054 (at the latest) the city also became the center of the Orthodox Church. 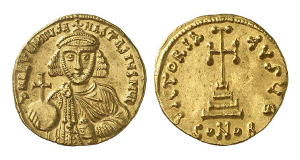 The history of coinage in the Byzantine Empire begins with the approximately 500 coin reforms executed by Emperor Anastasius I (491-518), which Justinian I (527-565) further expanded and which essentially remained valid until well into the 8th century. The coinage of Byzantium was tri-metallically constructed, with 3 denominations in gold (solidus, semis and triens), 2 in silver (miliarense and siliqua) and 5 in copper (40, 20, 10, 5 and 1 nummus). In the 7th century the number of mints for Byzantine coins was markedly reduced. Besides Constantinople, minting continued to take place in Rome, Ravenna, Carthage and Syracuse until these cities were eventually lost to the Lombards and Arabs. Thus a great spectrum of types, mints and denominations in Byzantine coins opens its mysteries to the collector today. 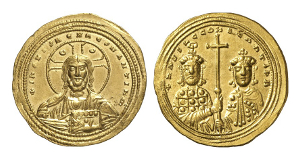 Under the Emperor Alexios I Komnenos (1081-1118) Byzantine minting was radically transformed in 1092. Thereafter in Byzantium there were four coin denominations (hyperperon and elektron-trachy in gold, stamenon in a silver-copper alloy, and tetarteron in copper), whereby the gold- and silver coins were minted in bowl form (“skyphate”). The significance of this -- not always particularly successful -- embossing technique is not completely clear to this day. Possibly it was intended to simply distinguish between old (minted from fine silver and fine gold) and new (composed of alloys) coins from Byzantium.

In 1204, in the course of the fourth crusade, Constantinople was conquered by a crusader army and the Latin Empire of Constantinople (1204-1261) was instituted. The Byzantine Emperor withdrew to Nicea during this period. From the end of the 13th century until the city’s conquest by the Ottoman Turks under Sultan Mehmed II (1444-1446 / 1451-1481) on 29 May, 1453, almost exclusively Byzantine silver coins (basilicon or stavraton) similar to the European groschen or “groat” were minted. At the time at which minting of gold coinage truly resumed in the remainder of Europe, it was discontinued in Byzantium. Byzantine gold coins, with their rulers’ portraits and images of Christ, represented until the 11th century a kind of “medieval world currency”, before they were eventually replaced by Italian coinages.

Experience the coinage and evolving history of the Eastern Roman Empire (Byzantium) from the 5th to the 15th centuries with a collection of Byzantine coins!