With his ascension to the throne of the Holy Roman Empire, Rudolf I of the Habsburg line elevated his family’s kings to the status of Emperors in 1273. The dynasty can be followed from Rudolph to Karl I (1916-1918), the last Austrian Emperor. 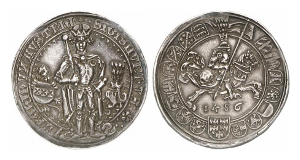 From 1438 until the end of the empire in 1806 Habsburgs provided the German Kings and Holy Roman Emperors almost without interruption. A skillful marriage policy based on the motto “Bella gerant alii, tu felix Austria nube” (= “Let others make war: marry, O fortunate Austria!”) wove for the Habsburgs, from the Middle Ages well into the modern era, a broad net of dynastic connections in Europe, which brought them (among others) the rule of Bohemia and Hungary, Spain and Portugal, as well as Milan and parts of the Lombardy. As a result, the Habsburgs also substantially influenced the coin- and monetary history of Europe in the modern era. Among the rulers from the “House of Austria” (Casa de Austria) are found such well-known names such as Charles V (1519-1558), Leopold I (1657-1705), Maria Theresa (1740-1780) and Franz Joseph I (1848-1916). 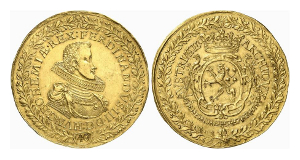 The oldest mintings in the category are coins of the Margraves and Dukes of Austria from the 12th century. Under Archduke Sigismund “Rich in Coins” (1446-1496) the first Austrian taler coins (guldiner) were minted in the Tirol in 1486. With the Imperial Mint Orders in the 16th century began the split in monetary history into the Holy Roman Empire in the northern lands with taler accounting, and the southern lands with gulden accounting. In the South the currency of the Habsburg hereditary lands took on a model character, further strengthened by the Prussian-Austrian duality of the 18th and 19th centuries.

In 1750 Austria altered its mint system to that of the 20-gulden-fuß, conceived as a response to the Prussian 14-taler-fuß (“Graumann Münzfuß”). On September 20th, 1753, an Austrian minting convention with the Bavarian Electorate came about on the basis of this “foot”, through which the embossing of the “convention taler” took place. In the imprints of the Habsburg coins themselves thereafter could be found the statement of the alloy in the form CONVENTION COIN or with the so-called “aufzahl” as X or TEN ONE FINE MARK (“ZEHN EINE FEINE MARK”) (alloy = 1/10 of the Cologne Mark at 233.856 g). 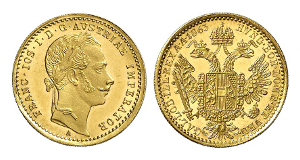 Following the demission of the Holy Roman imperial crown on August 6th, 1806 by Franz II (1792-1806), Austria’s influence on German minting declined. The last significant agreement in which Austria participated was the Vienna Monetary Treaty of January 24th, 1857. As the basis for coin weights, the Cologne mark was replaced by the zollpfund (“customs pound”) at 500 g. From the pfund were to be coined: in northern Germany, 30 talers; and in southern Germany, 45 guldens of Austrian or 52 ½ guldens of southern German currency. This produced a currency relation of 2 Prussian talers = 3 ½ southern German guldens = 3 Austrian guldens. The ducat, introduced as a gold trade coin by imperial decree in 1857, officially became invalid in the following year through the Vienna Monetary Treaty, but continued to be coined in Austria until 1915.

Following the German-Austrian War of 1866, Austria and Liechtenstein withdrew from the German Federation and the Vienna Treaty, and the monetary history of Austria-Hungary developed on its own. The currency introduced in 1892 was based on the golden krone (crown) at 100 hellers. For the 60th anniversary of the coronation of Emperor Franz Joseph (1830-1916) in 1908 a grandiose Austrian special edition coin was minted (100 “Austria in the Clouds” krones), which were also reissued repeatedly in the following period due to their popularity. In 1915 the minting of the Austrian gold coins of 20- and 100-krone value was also discontinued as a result of the First World War.

Discover the history of one of the most important European ruling dynasties, in coin images.