The Celts, whose name is traced back to the Greek historian Herodotus (Gr. “keltoi” = “the brave”), once lived in all of northern Europe, although the formation of a “Celtic nation” never occurred: rather, only occasional ad hoc alliances between individual tribes. 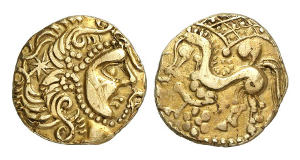 Celtic art and culture defined the lives of people from Turkey in the East to Ireland in the Northwest from the 5th to the 1st centuries BC. As the Celts had no written language of their own, our knowledge about them derives largely from the writings of their Greek and Roman opponents. 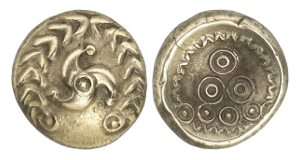 Celtic minting, which began in the late 3rd century, imitated Greek models and probably emerged as a reaction to the difficulty of barter trade with the expanding Greek colonies of the Mediterranean region. Throughout their history the Celts embossed gold, silver, potin (a copper-tin alloy) and bronze for their coins. The best-known Celtic gold coins are the so-called “little rainbow bowls” – small, dish-like Celtic coins with abstract symbolic patterns. Popular belief held that a rainbow could be made out in the Celtic coin images, whence the mintings acquired their name. The individual settled regions (Britannia, Gaul and Spain) und tribes (Vindelicians, Boii and Carni) can be distinguished by means of stylistic “trademarks” in the embossing of the coins. Celtic minting ends with the turn of the era, when nearly all formerly Celtic settled areas were conquered by the Romans. 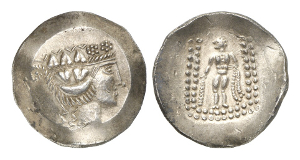 Immerse yourself in the picturesque world of one of the oldest European cultures with a special collection of Celtic coins, and experience the rich symbolism of Celtic minting!