You are here: Collection areas Coins of the German Empire

German Coins from 1871 – from the Imperial Coinage to the Euro

With the Constitution of the German Empire of April 16th, 1871 the authority for the imperial currency was transferred from the individual federal states to the imperial government. Reform which had long been needed toward the creation of a unified measurement, currency, and weight system could thus be carried out in the form of the imperial coinage. 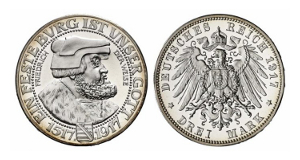 The mark (in northern Germany 1/3 taler and in southern Germany 35 kreuzer), divided into decimal units, was chosen as the common denominational unit. 100 pfennigs were to make up a mark, and both silver and gold denominations were to be in circulation. Another practical aspect was the fact that 10 pfennigs equaled approximately the value of a groschen, which explains the popular term for the denomination.

As the symbol of the unification won in the Franco-Prussian War (1870 / 1871) the imperial coins also received a unified image: the denominational pieces of between 2 and 20 Mark showed on the front side the imperial eagle, the year, and the denominational value, with the inscription “DEUTSCHES REICH”. The design of the reverse side of the imperial coins remained the prerogative of the respective state rulers (in, for example, Bavaria, Prussia, Saxony or the Free City of Lübeck), whereby the extent of the coin releases is proportional to the size of the minting authority involved. Thus in Prussia many more coins were issued than in, for example, Oldenburg or Saxe-Coburg and Gotha. For smaller coin values, the amount, year of issue, and imperial eagle were consistently displayed. The indication of the minting institution on the imperial coins was made with letters in the dynastic sequence as follows: *A = Berlin (Emperor of the German Empire, King of Prussia), B = Hannover, C = Frankfurt am Main, D* = Munich, E = Dresden, F* = Stuttgart, G* = Karlsruhe, H = Darmstadt, J* = Hamburg (those labeled “*” still exist). 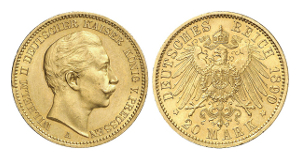 With the collapse of the empire in the First World War and the declaration of the Weimar Republic, the period of territorial states based on the noble hierarchy ended, and the imperial currency was once again unified. The catastrophic inflation of the years 1920 to1923 was brought under control through the introduction of the rentenmark on October 15th, 1923 (1 rentenmark = 1 trillion paper marks). One year later, on August 30th, 1924, the reintroduction of the reichsmark (RM) followed, which circulated officially until 1948 parallel to the rentenmark.

Following the Second World War a currency reform took place on June 20th, 1948 in the three Occupied Zones of West Germany. The “Bank of the German States” exchanged 100 reichsmarks for 6.50 deutsche marks (DM). The currency in the Soviet-occupied zone, too, was initially called the “deutsche mark”, then in1964 “mark of the German Federal Bank” (“Mark der deutschen Notenbank”, MDN) and after 1968 simply “mark” (M). After an eventful period for the imperial coinage, on January 1st, 1999 a new chapter in monetary history was opened with the introduction of the Euro (EUR), initially as credit money. On January 1st, 2002 the introduction of Euro cash followed.

The turbulent history of Germany in the 20th century produced a multiplicity of coin types, as well as emergency-, memorial- and token money minting, and thus represents a richly varied and – due to extensive literature – also easily accessible collection area in coins. Because of mechanical minting technology taking hold in the final years of the 19th century and, in some cases, quite large issues of individual types, even minor nuances of condition can play a large role in pricing with the coins of the German Empire. One popular collection area in German Coins involves “test coins” – that is, unreleased model mintings with interesting coin images by well-known artists. Of course, those who wish to can also supplement such a collection with the paper money of the individual German states and the gold bullion coinage of the Federal Republic of Germany.