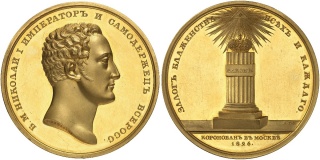 On the evening of February 4th, 2016, we finished our 11th Berlin Auction with a big success.

The 912 lot numbers with an estimate of 4.8 million euros reached a total hammer price of more than 6.6 million euros.

Noteworthy was the result of the Saxonian series with a total hammer price of more than half a million euros (approximately 50% over the estimate). Furthermore, the series of Russian coins and medals reached an impressive result with a total hammer of 1.6 mio. euros, from an estimate of 1.2 mio. euros.

Beside our regular auction on Thursday, we have also auctioned off two "World Money Fair Pandas" in gold and silver, each with the serial number 1. The hammer fell for the golden Panda at 9,250 euros and for the silver panda at 2,200 euros. The proceeds will be donated directly to the State Coin Cabinet of the Art Museum Moritzburg Halle, part of the Foundation of Domes and Castles of Saxony-Anhalt.

We would like to thank you, our customers, for your participation and for your trust in us! We are looking forward to welcome you to our spring auction in Osnabruck from March 14-18, 2016.