Venice, the Doges and the House of Mocenigo 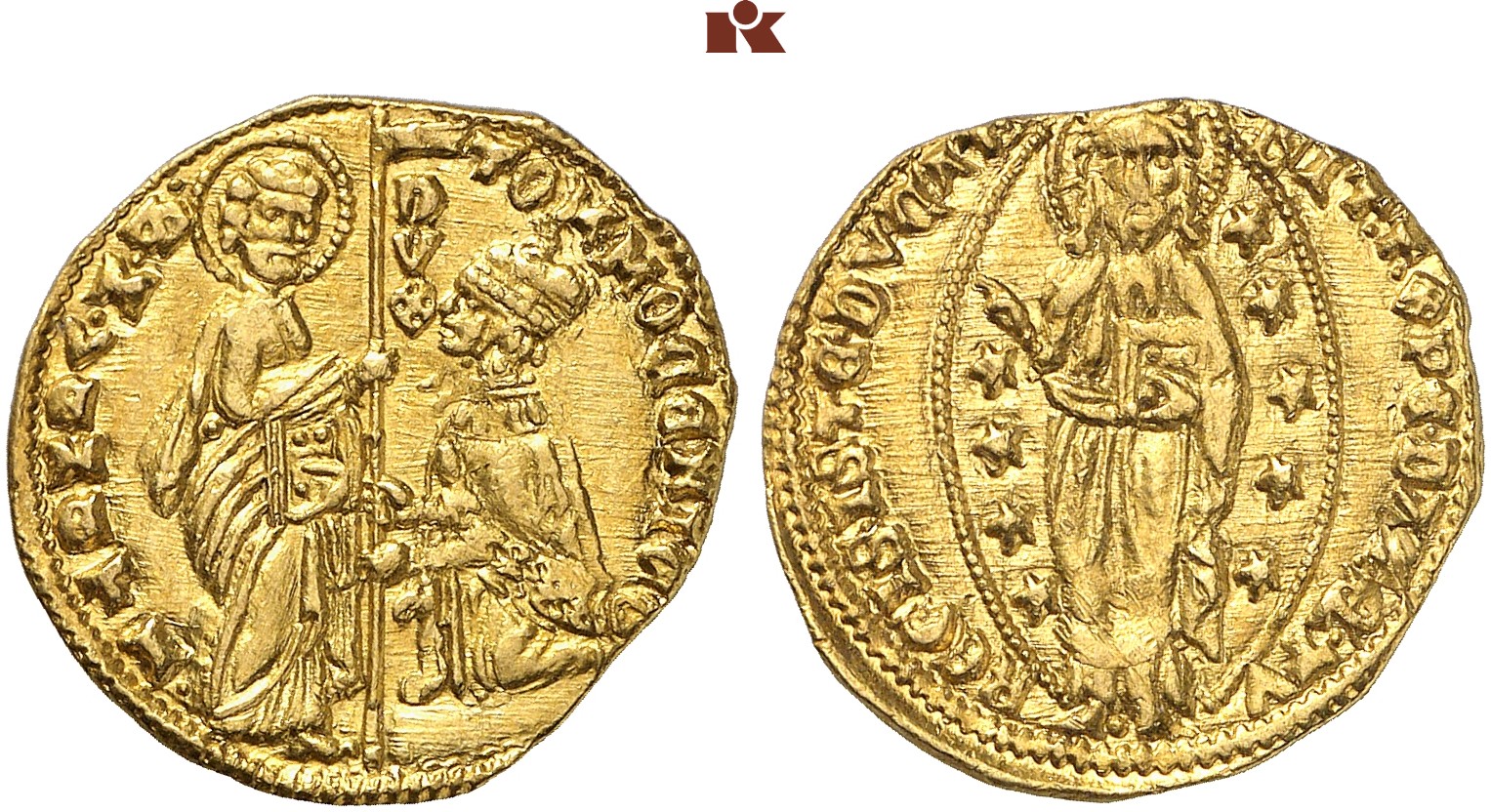 Basically, the ducats or zecchines of the Republic of Venice all look the same. On one side, they show Christ in the star-decorated mandorla. In his left hand, he holds the Gospel. The right hand is raised in benediction. The inscription always remains the same as well: "Sit tibi Christe datus quem tu regis iste ducatus", meaning "Christ, let this duchy that you rule be given to you."

At first glance you might get the impression that the other side of the coin is just as invariable but this is misleading. It presents the respective doge who receives the banner as a sign of rule over Venice from St. Marcus. It is only the inscription that makes the depicted doge an individual. In this case it is Tomaso Mocenigo who ruled over Venice from 1414 to 1423.

Tomaso Mocenigo, the First Doge of the Mocenigo Family

Tomaso Mocenigo came from a family that had originally emigrated from Milan, probably around the turn of the millennium. The Mocenigo family had managed to be admitted to the Nobili class before the "serrata", the Closing of the Great Council in 1297. Nonetheless, in the 15th century, they were still considered part of the "new houses".

Tomaso must have been an incredibly vigorous and competent man with excellent connections to the European nobility. In addition, he had become outrageously rich through the Levant trade.

His political ascent began with the command of a galley in the War of Chioggia (1378-1381). He was so successful that he was entrusted the supreme command of the entire Venetian fleet in 1395. In this position, he succeeded in shocking Constantinople in 1396 - and immediately afterwards rescuing the German King Sigismund. Of course, that earned him his favour. Hence, he was staying at Sigismund’s court on a diplomatic mission in 1414 when he was elected doge in absentia.

Under his rule, Venice underwent a tremendous economic boom. It rose to the rank of the Italian great powers, secured supremacy over the Adriatic Sea and concluded the crucial trade agreements with the Turks.

After that, it took more than half a century for the next Mocenigo to be elected doge. It was due to the elaborate election process, which was proceeded from 1268 until the fall of the Republic, that it took so long for this influential family to be back in duty.

After the election, they retained full control over their doge. He could be unseated at any time and had to accept a multitude of restrictions: The doge was only allowed to leave the Doge's Palace on state missions. He had to cease all private business and was not allowed to accept gifts. His family was also affected. Men were forbidden to accept a position in church, while women were forbidden to marry a foreign ruler. The doge had to consult with his advisors on all actions and decisions. He was not even allowed to read a letter addressed to him without the presence of a doge adviser. Finally, after the doge’s death, the final account followed: If there had been financial disagreements, the family had to account for it. It is no wonder that the Constitution forbade the rejection of the doge’s election. No powerful person was willing to voluntarily undergo such restrictions. 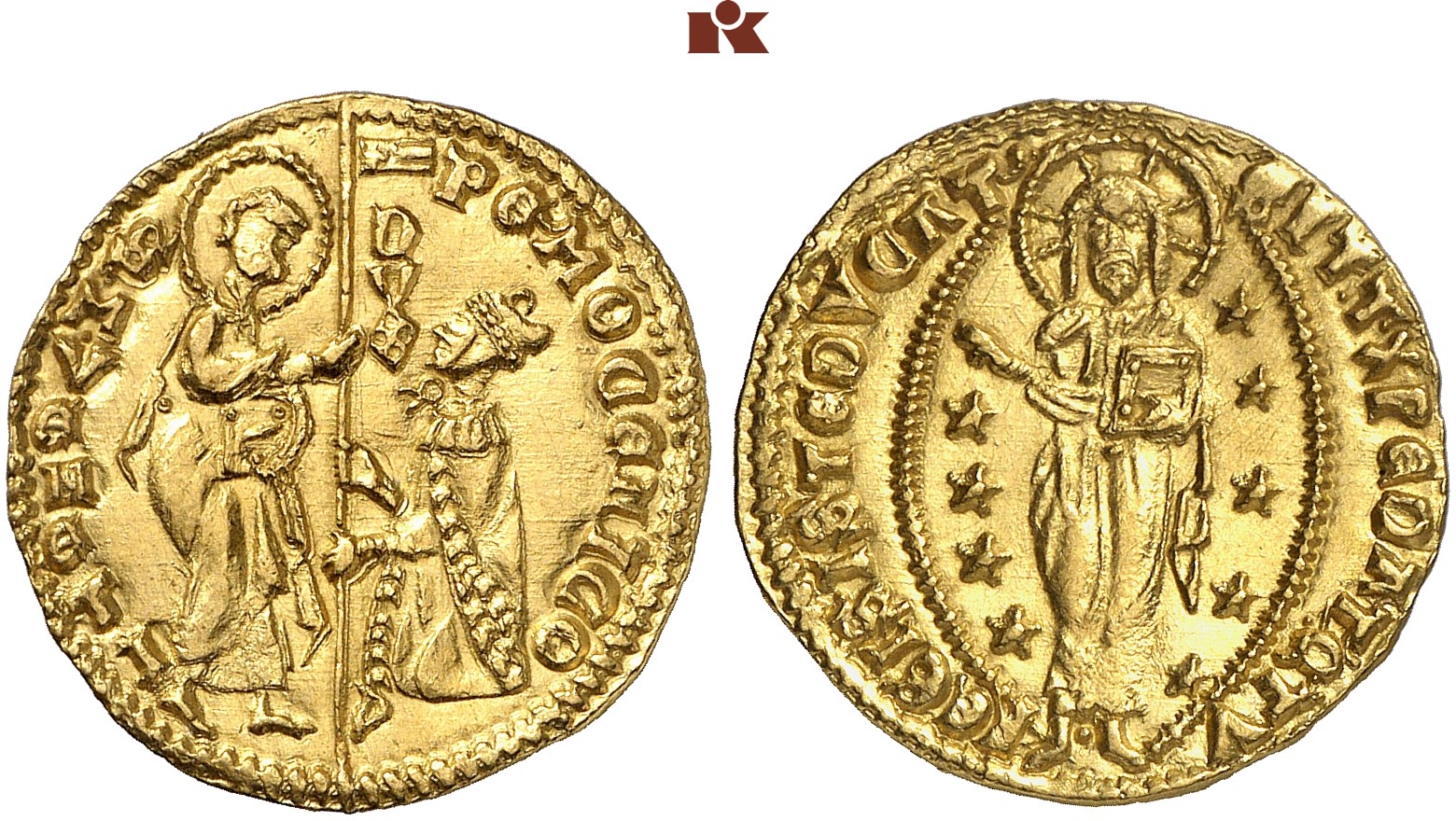 Pietro Mocenigo: Doge for a Year

Nonetheless, it was a great honour to commission the doge. The Mocenigo family received this honour relatively frequently with a total of seven doges. This was no surprise since the Mocenigo were one of the most reproductive families in Venice. There were 15 main stems alone, as well as several smaller secondary stems.

Pietro was a nephew of the first doge of the House of Mocenigo. Like his uncle, he was commander-in-chief of the Venetian fleet, leading many successful wars and forays in Asia Minor.

His coins are extremely rare because he was virtually in office for only a year. He was elected on December 14, 1474, and died of malaria, a disease he had caught in Asia Minor, on February 23, 1476. 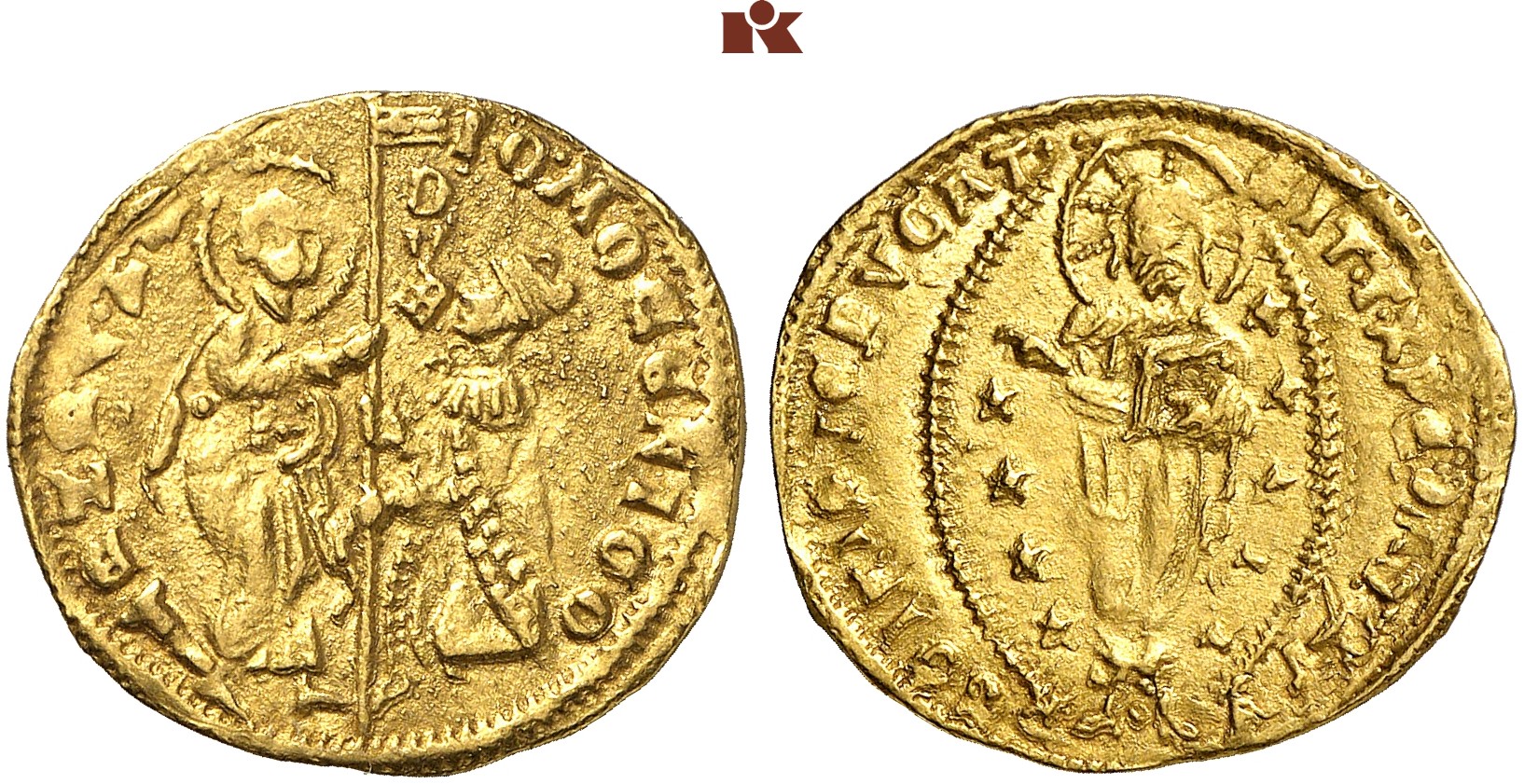 It may have been a tribute to the Mocenigo family that after a two-year interlude, Pietro’s brother, Giovanni Mocenigo, was elected doge. He presided over Venice from 1478 to 1485, but his rule was less fortunate than that of his brother. Venice had to give up large areas. The plague recrudesced again and again, taking first the life of the Dogaressa, then that of the Doge himself. 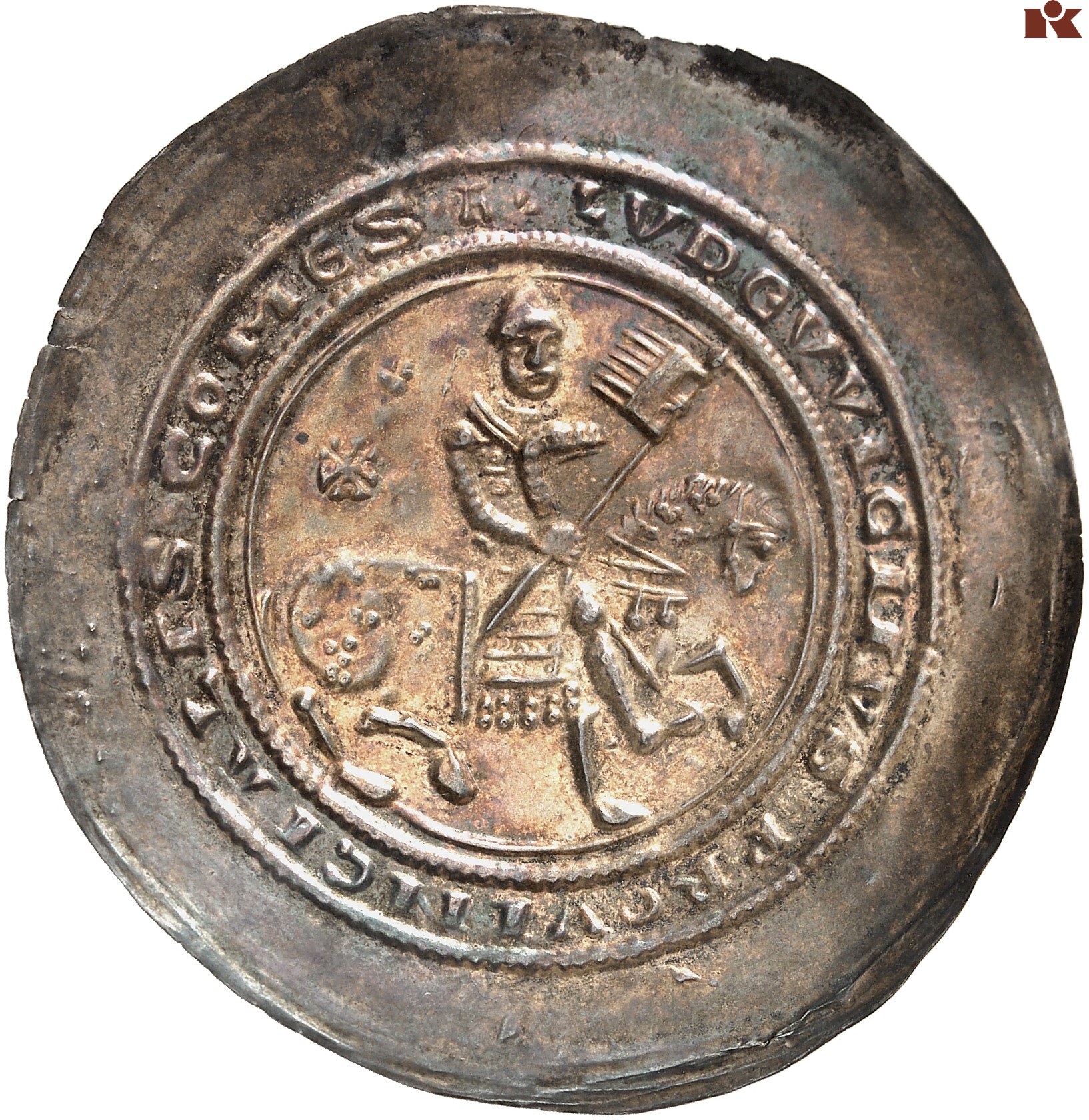 This damaged the reputation of the Mocenigo family. It took almost a century before another member of the Mocenigo was elected doge. Alvise Mocenigo took office in 1570 and died in 1577. He had only been granted seven years, but what a time those years were! 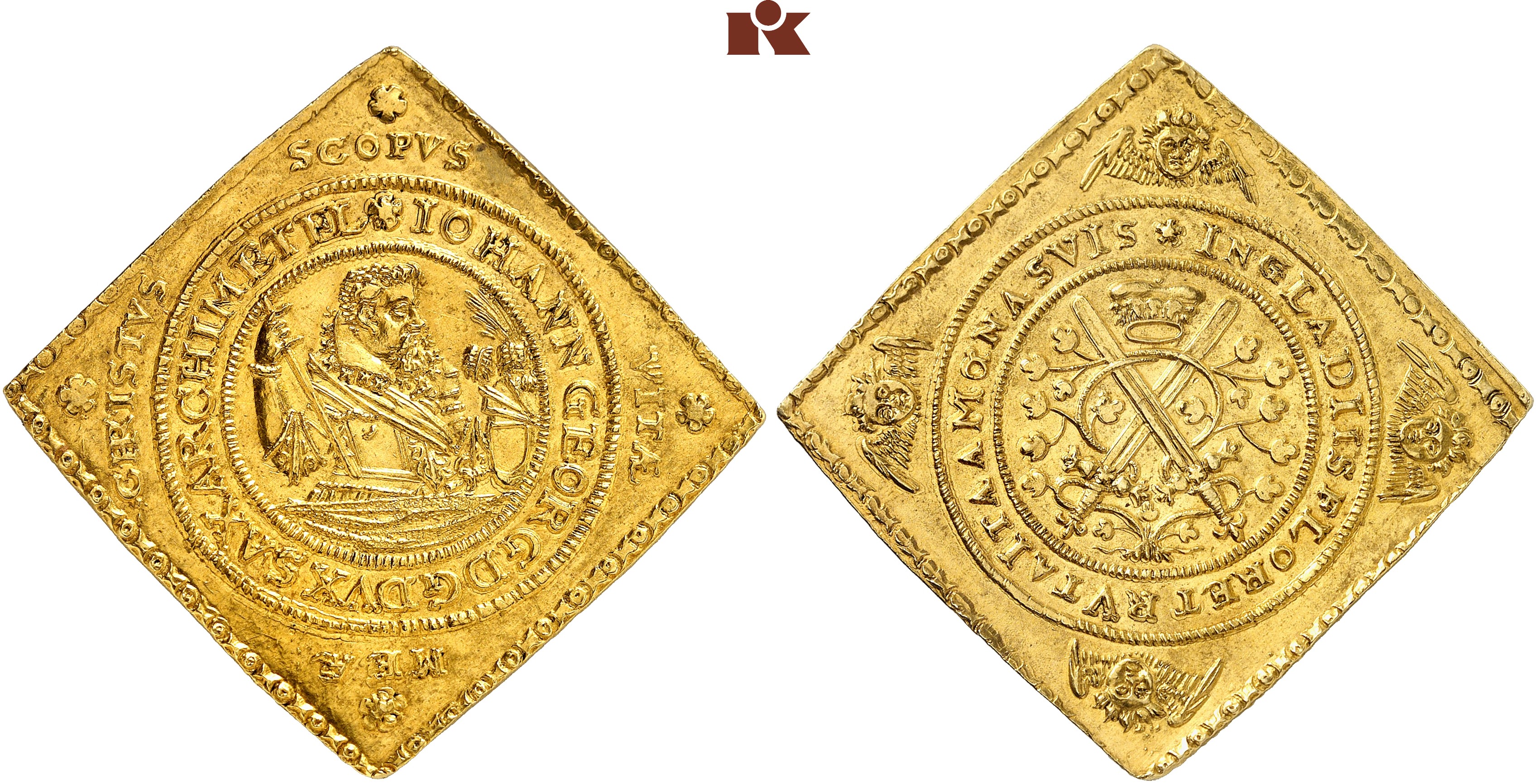 In 1571, the Christian fleet defeated the Ottomans at Lepanto. Despite this victory, it cost Venice 300,000 ducats for the Ottomans to grant them the privilege to continue trading between the Occident and the Orient.

In 1574, the French King Henry III visited the city. Alvise Mocenigo received him with all the splendour, but could not win him as an ally.

Then the Doge's Palace burned down and the plague broke out again. It was the worst plague Venice had ever experienced. It was this plague that Venice owes the church of Il Redentore to. The Senate vowed to honour this church on September 4, 1576, if the plague would finally end. It did at the onset of winter.

Alvise died half a year later, on June 4, 1577. Wicked tongues claimed that he had hung himself because he could no longer endure just how urgently the whole of Venice was awaiting his death, a new doge, and thus better times. 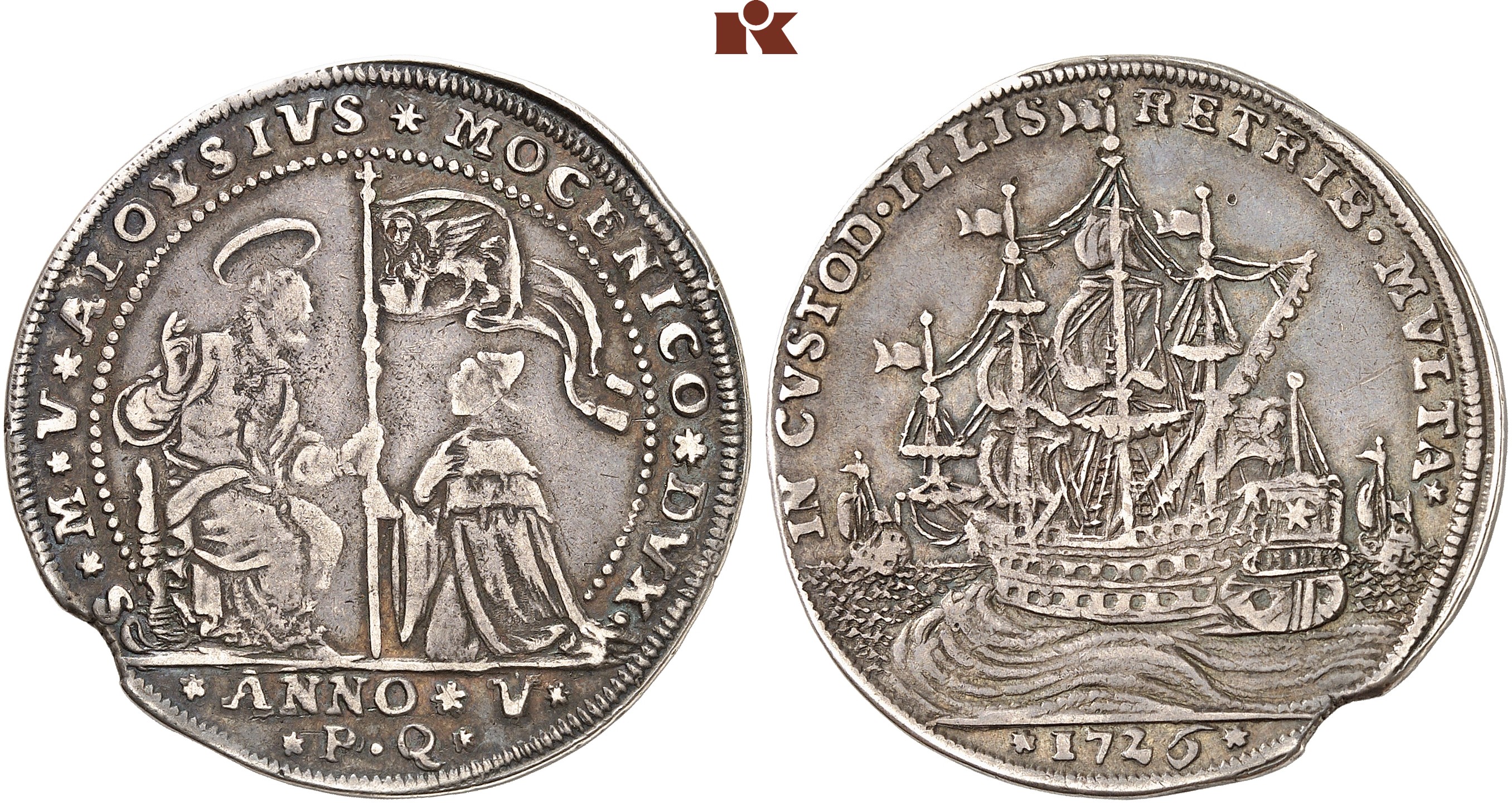 Alvise II, III and IV: Nothing More Than a Representative Pawn

Although a splendid ship is depicted on this 18th-century osella, the Venetian naval power was a thing of the past at the beginning of the 18th century. Nonetheless, the Venetians had managed to open up a new business field. Venice was the favourite destination for all those young princes who were sent to the Grand Tour by their fathers, accompanied by a teacher. Where the masters of painting were on the agenda in Florence, the churches in Rome, and the ancient statues in Naples, Venice was a place of pure pleasure.

Venice was hardly playing a role in history anymore. Nevertheless, the great and the small council still met, and of course, doges were elected. Three members of the Mocenigo family inherited this position between 1700 and the fall of the Republic in 1797. They all bore the name Alvise, for the first doge of this name had remained childless. He had bequeathed all his fortune to his brothers, with the condition to give his name to their eldest male offspring, respectively. 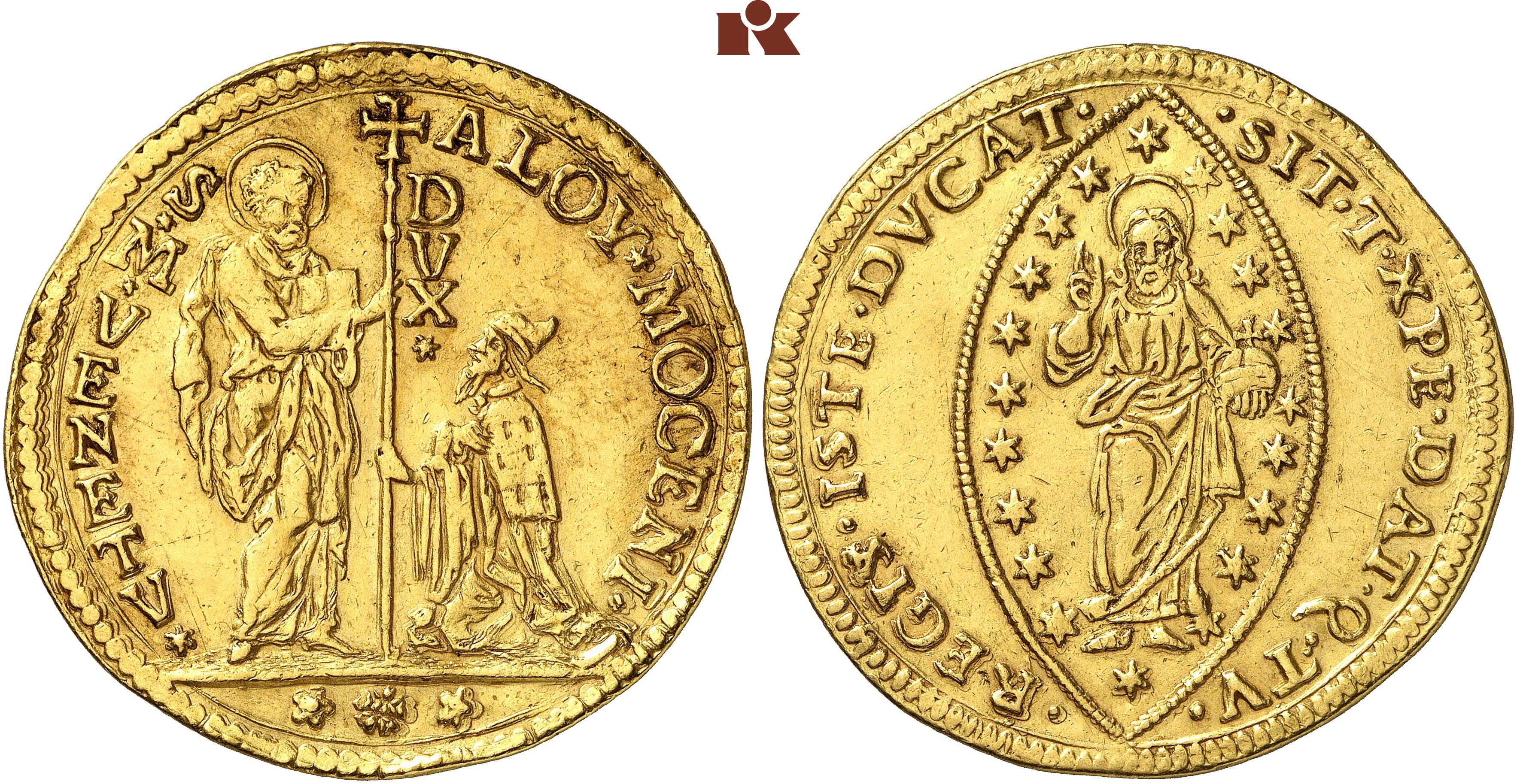 The coins of this epoch are larger and more magnificent than those of earlier times. 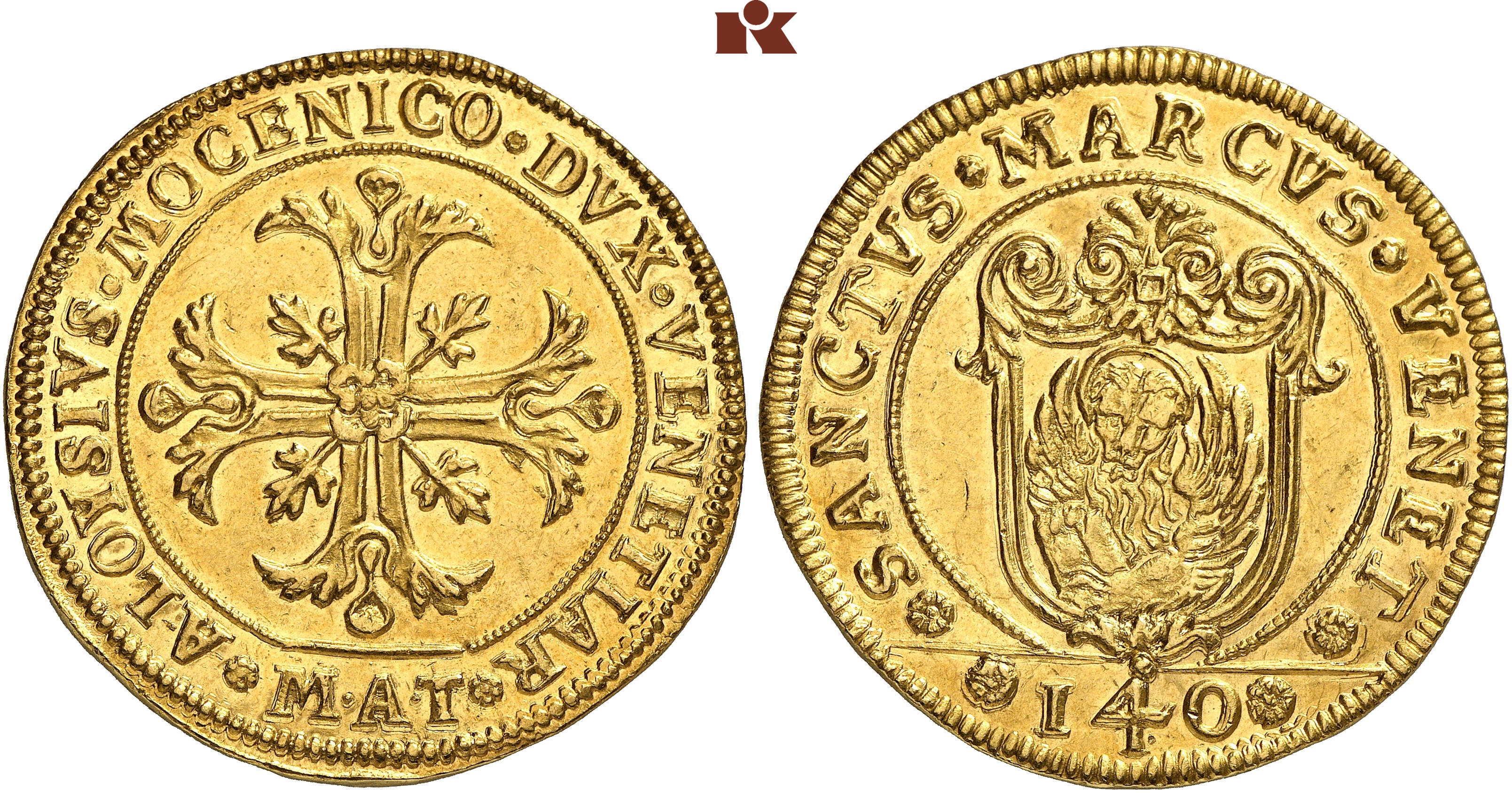 Like this off-metal strike in gold of 12 zecchini from the dies of a Scudo della croce, they served as gifts or to pay significant artists. After all, Venice’s reputation was based not only on its many casinos, but also on the quality of its music and theatre performances, as well as its bullfights and masquerade balls. For this reason, the Serenissima attracted celebrities from all over Europe into its city and rewarded them with impressive monetary gifts. 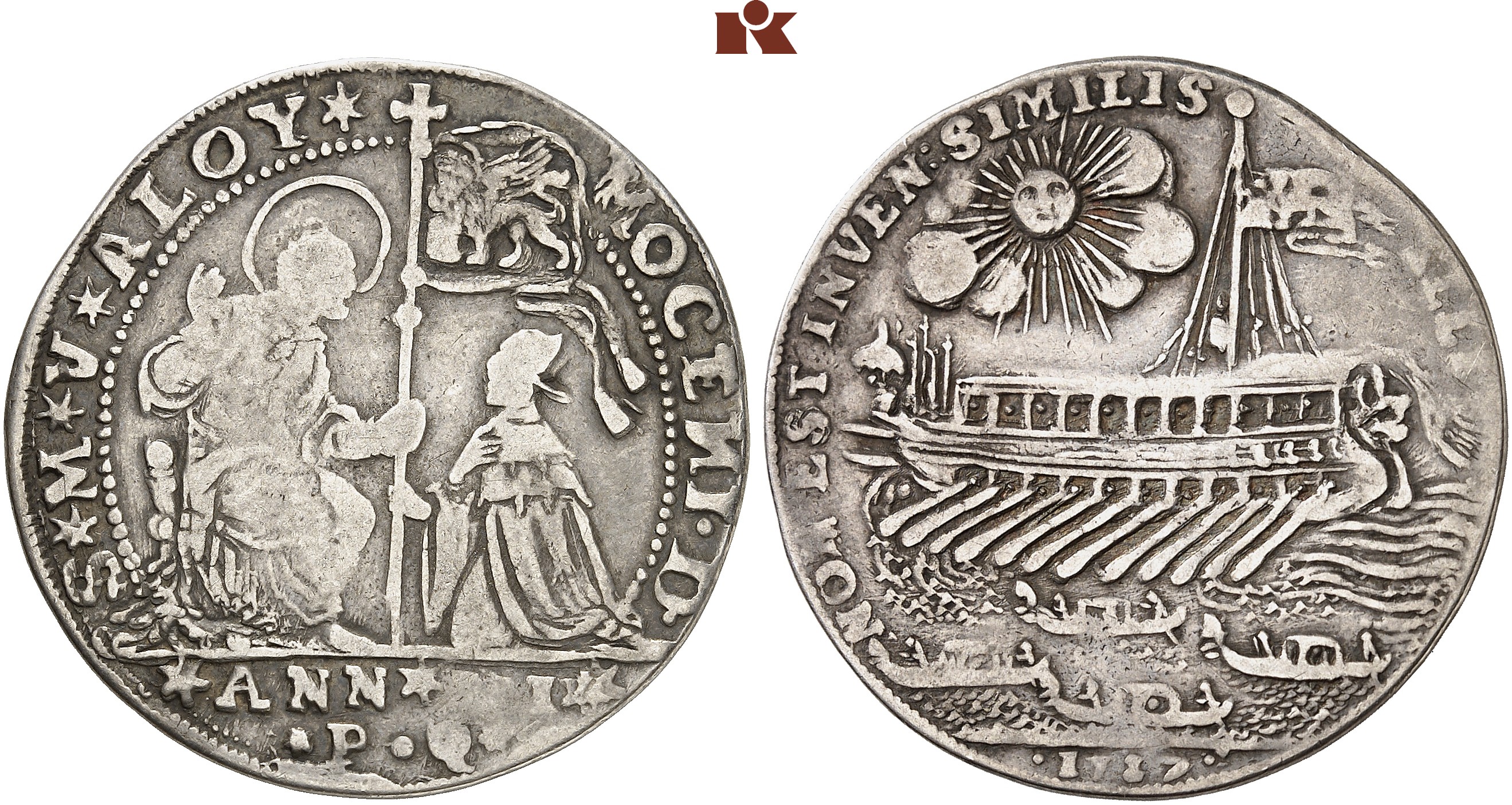 Scandal around the Sposalizio del Mare

The highlight of the tourist festival calendar was the Sposalizio del Mare, the Marriage of the Adriatic, which took place every year on the feast of the Ascension of Christ. Representing Venice, the doge, as a bridegroom, drove out to sea on his magnificent state ship, the Bucintoro. There, under prayer, he threw a precious ring into the water. 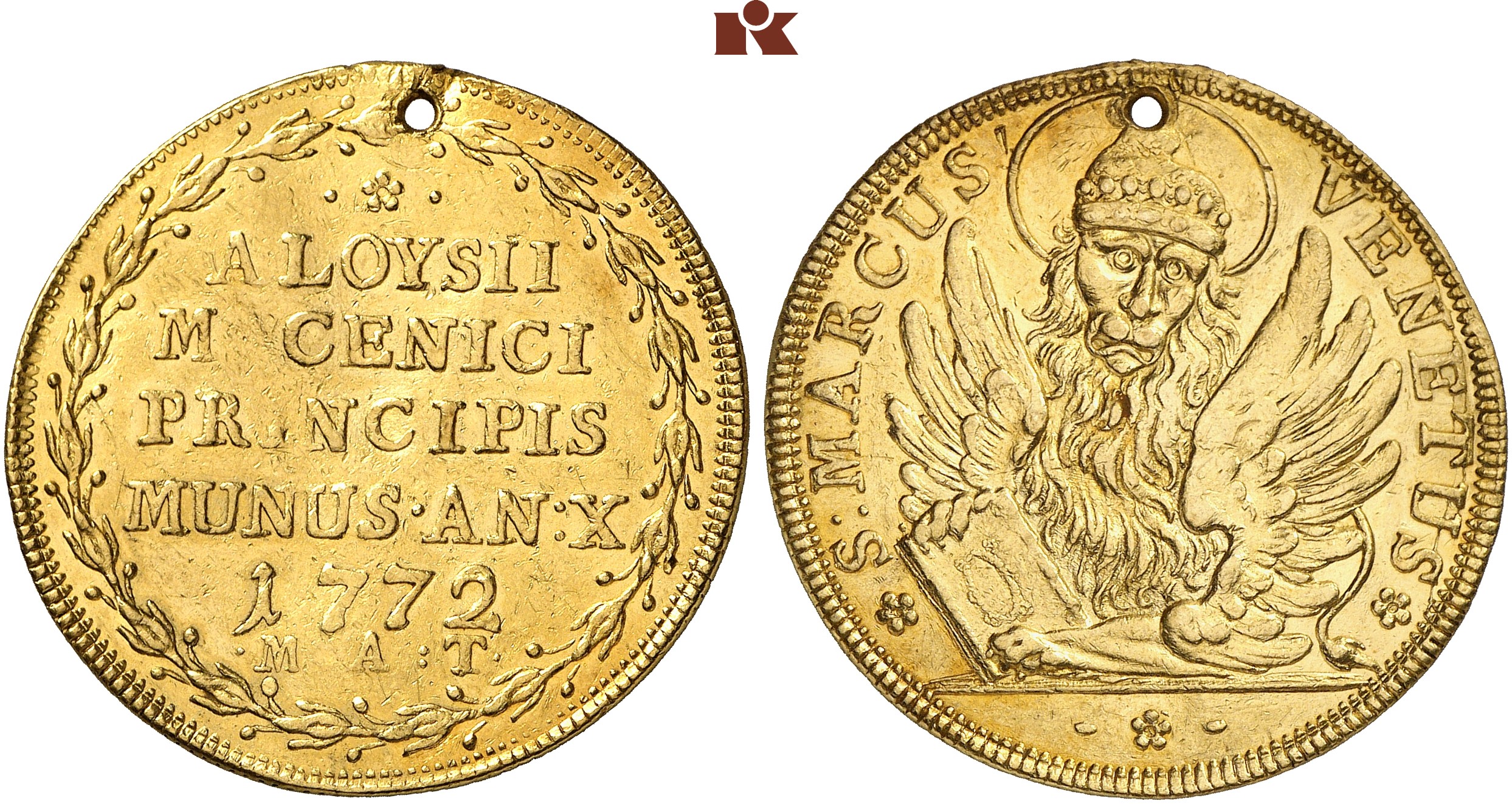 However, in the 18th century this rite was not even taken seriously by the doge himself, which is proven by the fact that Alvise IV Moncenigo, the last doge of his house, was involved in a scandal around this exact ring. You see, it had not landed in the sea, but found itself on the finger of a noble lady with a dubious reputation. 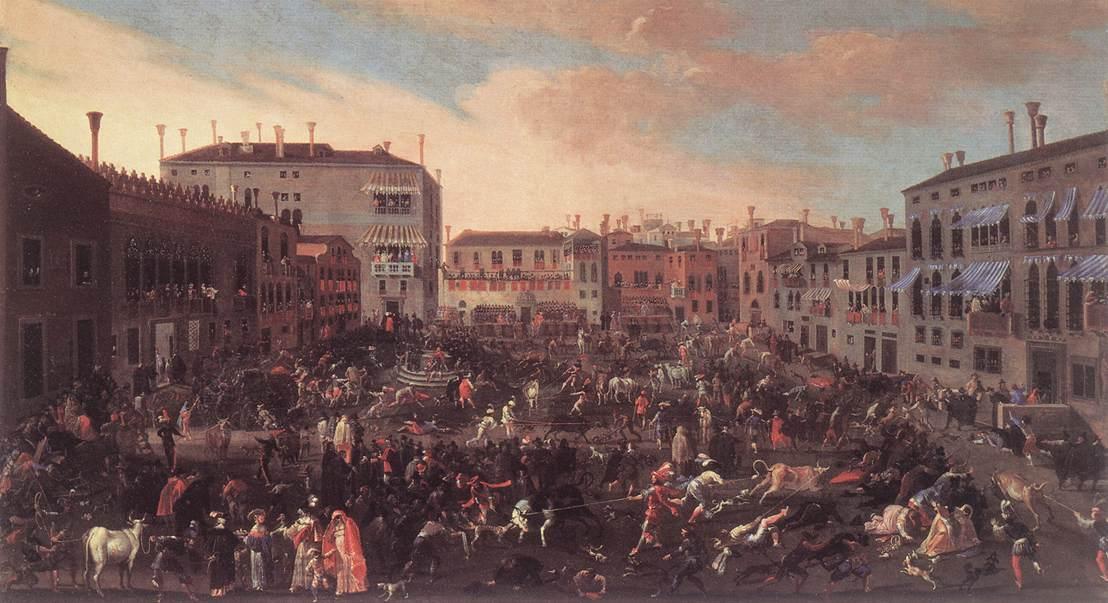 Bullfight at the Campo San Polo during the Carnival in Venice. Joseph Heintz the Younger, painting from 1646.

Not that this would have caused even the slightest harm to the popularity of Venice - on the contrary. To this day, Venice is considered one of the great attractions that every tourist must visit at least once in their life.