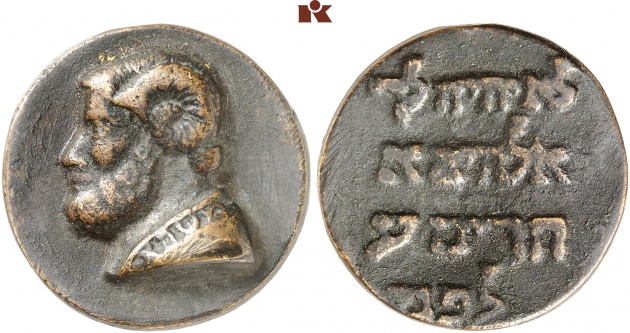 Moses’s depiction with horns (in this case with ram’s horns) traces back to the book Exodus’s Latin translation by the church father Hieronymus. He translated the Hebrew text of Exodus 34, 30 into Latin: "videntes autem Aaron et filii Israhel cornutam Mosi faciem timuerunt prope accedere." (Aaron and all the people of Israel saw Moses, and behold, the skin of his face shone, and they were afraid to come near him.) There can be no doubt that the Hebrew text wanted to say that Moses’s face was glorified, when he came down from mount Sinai with the two tablets inscribed with Yahweh’s commandments. To all appearances, Hieronymus thought that in Hebrew "horned" was a metaphoric expression for a luminous face reflecting the glory of God. It was quite late in West European art – namely in the High Middle Ages – that the visual arts started to represent Moses horned. The most famous representation of,Moses cornatus‘ is Michelangelo’s statue in St. Peter in Rome. Ram’s horns as Moses’s head ornament – as in the case of this medal – may have been chosen for their resemblance to the shofar which was a well known symbol for Judaism.