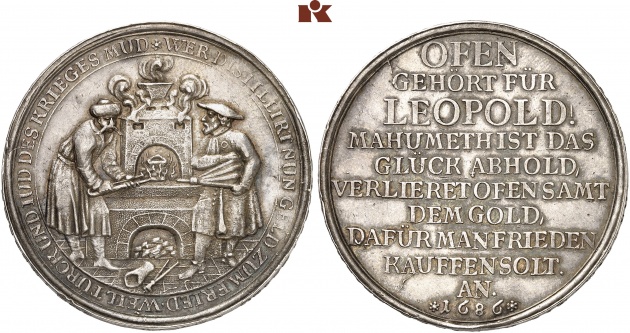 This medal recalls to a brutal massacre of Jews in the course of the Holy League’s campaign against the Turks in 1686. Ofen/Buda (today a part of the modern Hungarian capital Budapest) had been under Turkish rule since 1541. During the Turkish domination of Ofen a large part of the Christian population had fled into the neighbouring Habsburgian Empire, whereas many Gipsies and Jews emigrated to Ofen so that they became dominant in Turkish Buda. After the Turkish failure in the Second Siege of Vienna in 1683 Emperor Leopold I saw an opportunity to conquer Hungary. Supported by the Pope, King Jan Sobieski of Poland, and the Republic of Venice he started his counter-strike in 1684, but this first siege of Buda failed. Two years later, in 1686, the Holy League conducted a new campaign against the Turks and attacked Ofen again. After two months of besiegement, on the 2nd of September 1686, the League’s soldiers succeeded in entering and plundering the city. They slaughtered not only the Turkish habitants of the city but also many of the Jews living there. About 1000 of them were massacred and their homes looted, hundreds of them sold into slavery. Ofen’s mosques and synagogues were destroyed, and the dead bodies of Jews and Turks were thrown into the Danube. In 1687 the Austrians defeated the Turks in the battle of Mohacs once more. In view of these successes the Hungarians assigned the Hungarian crown to the Habsburgian dynasty. In this respect the medal commemorates a turning point of world history.