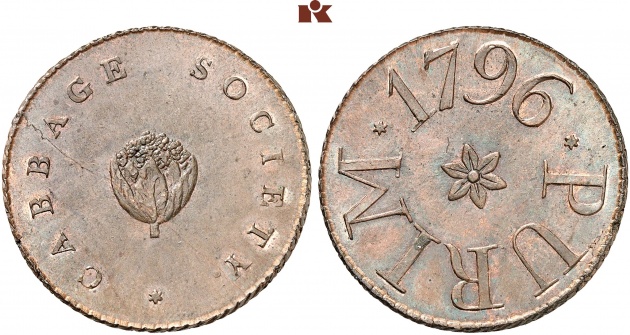 The token-shaped medal is published by Dalton/Hamer, The Provincial Token-Coinage of the 18th Century, London 1910 (repr. by Stow, Mass. 1967) as number 227 in the Middlesex section. Friedenberg mentions other examples which were produced in 1780 and 1814. The meaning of the medal is still puzzling, as neither a Cabbage Society nor the reason for the minting of them is known. In connection to another token with the image of George Washington and the US flag beneath the legend LIBERTY AND SECURITY (Dalton/Hamer ibid. 243) which has the same words around the rim, Friedenberg interprets the medals as an expression of secret support for American independence. The suggestion of the Purim festival can also be understood in this context, a festival which also celebrates the freedom of a (Jewish) people.