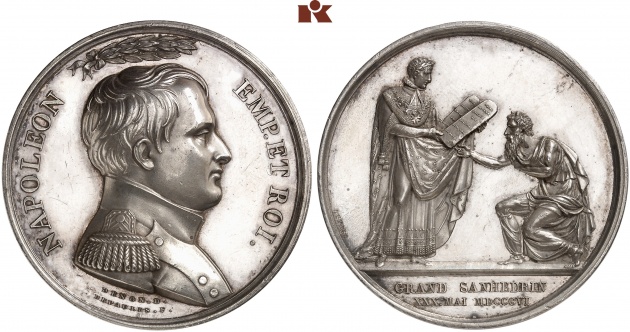 As early as the French Revolution Jews living in France had been given the same rights as other Frenchmen. The 'Declaration of the Rights of Man and of the Citizen' guaranteed freedom of religion. Napoleon tried to enforce these principles in the countries which he had conquered. Although he took a critical stance against Jewish moneylenders and took steps to prevent their activities, he made efforts to better the Jews’ situation all over his empire. In France he took a lot of measures to integrate Jewish people in French society in order to eliminate the differences between them and the majority of the population. Many Jews feared the complete loss of identity by total assimilation. However, he invited the French Jews to elect representatives which formed a council named Sanhedrin and which should pursue the interests of the Jewish community before the French Government. The Hebrew word Sanhedrin/Council traces back to the Greek word for council: synhedrion. Jean Bertrand Andrieu (1761-1822) was a major French medalist. Dominique-Vivant Denon (formerly known as De Non, 1747-1825) was the Directeur général du Musée central des arts (since 1804 Musée Napoléon, today’s Louvre) and also the director of the French institute for the minting of medals.