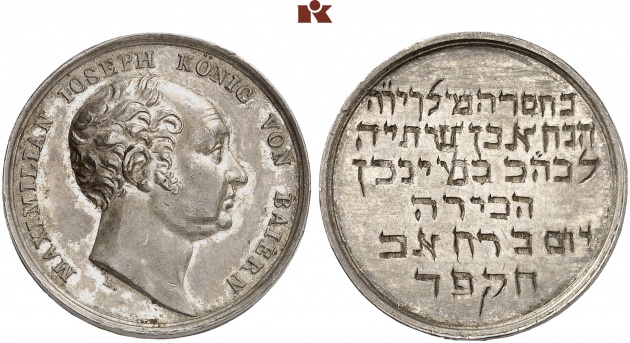 The Hebrew text on the reverse says: "The cornerstone of the synagogue to be constructed in the capital of Munich was laid by the mercy of the king on the 2nd day of the month Af in the year 5584". Hauser l. c. describes the new built synagogue as follows: "The synagogue was built in the style of High Renaissance by Baurat Metivier in the years of 1824-1826. It housed a hall surrounded by a women’s gallery, which was supported by nice columns of red Tegernsee marble. The columns were topped by palm capitals of white marble. The inauguration took place in 1826 in presence of King Ludwig I. and his wife. After the completion of the new synagogue at the Herzog-Max-Straße, inaugurated in 1887, this building was demolished and replaced by a private house."